Diagnos (ADK.V) announced that their artificial intelligence program delivered world-class results in the GAMMA (Glaucoma GrAding from Multi-Modality imAges) contest, held alongside The Medical Imaging Computing and Computer-Assisted Intervention Society 2021 conference, according to a press release.

The contest included 566 teams from around the world, and was judged on the successful performance of three AI-driven tasks.

“We are extremely pleased with our performance in this competition which brought together 566 participating teams from around the world. This achievement places DIAGNOS at the top of Artificial Intelligence companies as we continue to be cutting edge technology leaders for the detection of major retinal pathologies,” said Riadh Kobbi, vice-president – business intelligence at DIAGNOS.

Diagnos is a tech company that uses an artificial intelligence platform called FLAIRE to detect critical health problems. It’s used for the modification and swift development of applications like Computer Assisted Retina Analysis (CARA). CARA’s image enhancement algorithms give the best return on investment in terms of analysis of retinal images in a cost-effective manner for real-time screen of large volumes of patients. CARA has been given the nod by Health Canada, the FDA, CE (Europe), COFEPRIS (Mexico) and the Saudi FDA (Saudi Arabia.)

“We are very proud to have established a strong technical team at DIAGNOS to be able to compete worldwide in the Artificial Intelligence space. This is a world-class competition. AI-driven analysis of retina Fundus images and OCT (Optical Coherence Tomography) images is the new medical standard in the detection and monitoring of serious vision-threatening diseases. At DIAGNOS, we are investing heavily in R&D and in our strategic alliance with ETS (Ecole de Technologie Supérieure) to maintain our leadership in this space. Delivering top-tier results in this competition demonstrates DIAGNOS’ technical excellence,” said André Larente, CEO of DIAGNOS.

ADK entered into a memorandum of understanding (MOU) with Essilor International, a subsidiary of EssilorLuxottica, which could eventually translate into a potential distribution agreement for its CARA AI platform in clinics around the world . EssilorLuxottica is the world’s largest eyecare company, sporting 15,000 global locations.

The deal hasn’t quite been finalized yet, but this still provides some credibility to the technology and represents a considerable opportunity for the company. Assuming closure of the deal, the rollout could commence in Q2 2022.

This company presently has a $34 million market cap and the potential for a big deal on the horizon. Let’s see how they stack up against the competition. 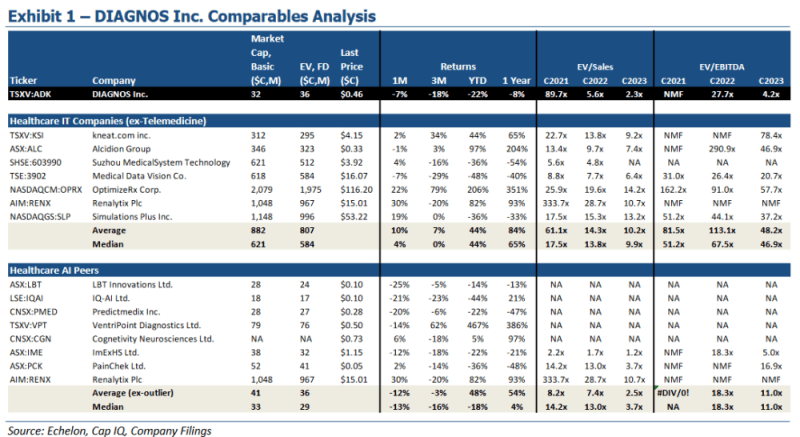 If the deal doesn’t pan out than Diagnos has other growth avenues in the works.

The company has successfully installed their platform in 12 New Look locations in Quebec and there’s work being done regarding the optimization of the training and standard operation procedures for a wider rollout—according to a report completed by echelonpartners.

The completion date for the SOPs and training is mid-November and then they should scale to 5 new installations a week, with a stretch year-end goal of 40 new locations.

Diagnos (ADK.V) Keeps Its Eye on the Prize, Secures Another Multi-Year Contract

To Invest or Not: Diagnos (ADK.V)