The S&P 500 printed new record highs this morning. The Nasdaq and the Dow Jones also saw nice gains at the open and all major indices are still green for the day. The Russell 2000 on the other hand is breaking below our intraday levels. Not a good day for the US small caps, and many of the meme/reddit fueled short squeeze stocks are feeling the pain right now. 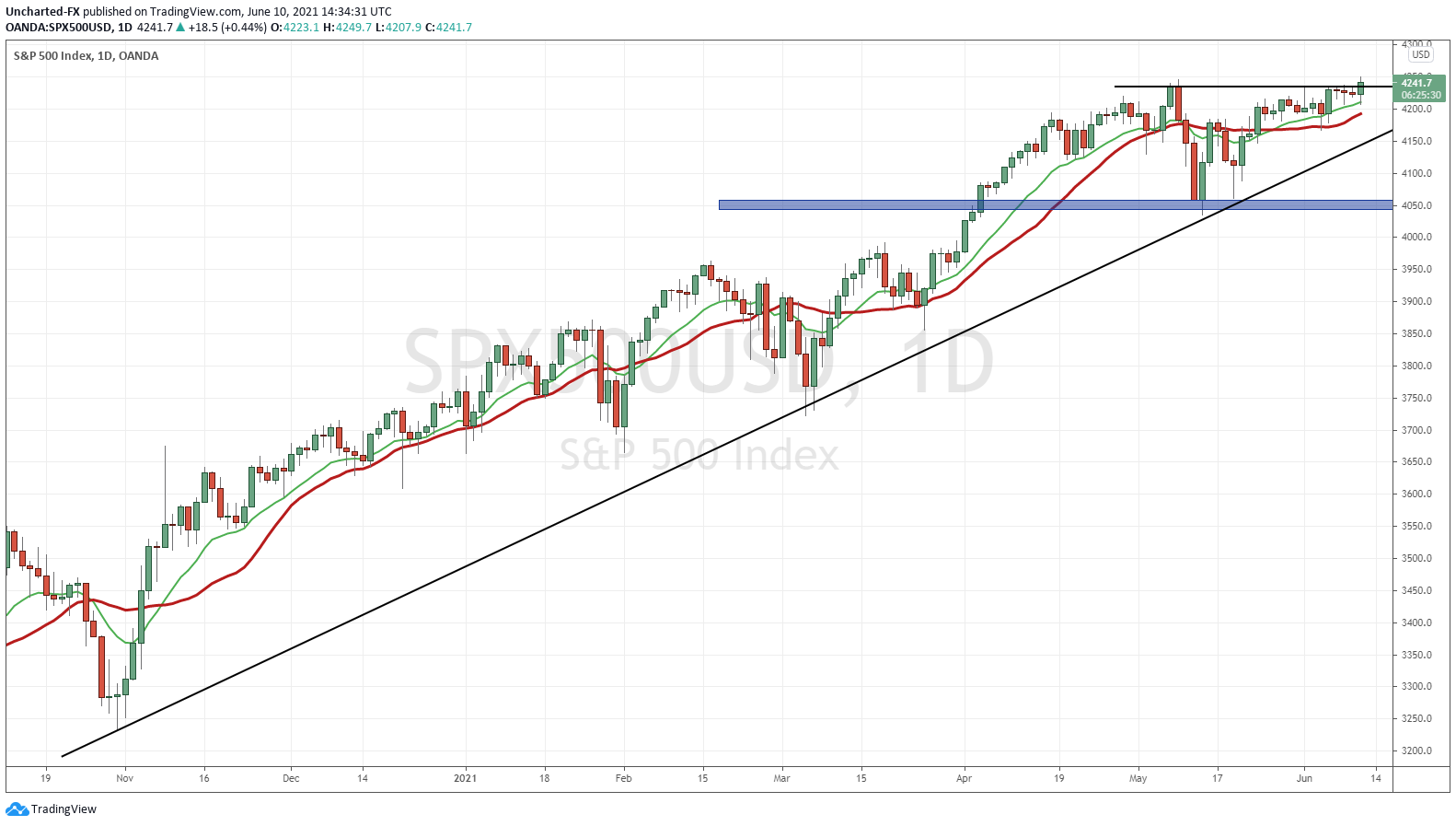 S&P 500 new record highs. Now can it confirm a close above be the end of the day?

I promised readers of Market Moment that Thursday would see more action. This week is largely echoing last week. Indices ranging, some meme stocks popping and then selling off. It wasn’t until Friday last week that the indices saw some consistent action. US employment (NFP) numbers were released, and they did not meet expectations. Markets popped higher knowing that this data would not meet the Federal Reserves expectations for a strengthening economy. Traders began pricing in no change to Federal Reserve monetary policy at next week’s anticipated FOMC meeting on June 16th.

The Federal Reserve has two mandates: maximize employment and price stability. We just had employment data before the big Fed meeting next week. What about price stability? US Consumer Price Index (CPI) data came out today…hence why we saw a market reaction.

Consumer prices jump 5% in May, fastest pace since the summer of 2008

That’s the headline which greeted traders this morning. Oh and US Jobless Claims? They came in at 376,000 people claiming initial unemployment benefits, a touch higher than expectations. So wages are declining, employment still not picking up as many thought it would, but prices are inching higher. What could go wrong?

Let’s break some of the data down:

Consumer prices for May accelerated at their fastest pace in nearly 13 years as inflation pressures continued to build in the U.S. economy, the Labor Department reported Thursday. The consumer price index, which represents a basket including food, energy, groceries, housing costs and sales across a spectrum of goods, rose 5% from a year earlier. Economists surveyed by Dow Jones had been expecting a gain of 4.7%. The reading represented the biggest CPI gain since the 5.3% increase in August 2008, just before the financial crisis sent the U.S. spiraling into the worst recession since the Great Depression. 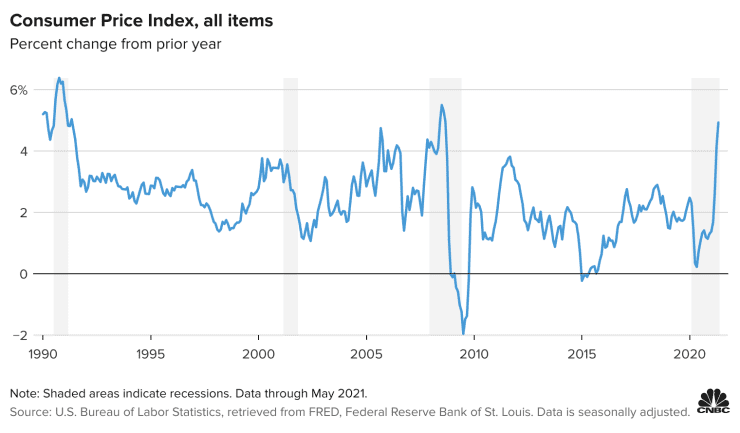 Believe it or not, surging used car prices was what helped much of these inflation gains. I can attest to that. I just went to a car dealership this past weekend. New cars are hard to come by. Not many new cars are coming to the dealerships due to supply chain disruptions and the chip shortage. There are plenty of used cars though. If you are in the market for a vehicle, and you don’t want to splurge 6 figures on a brand new high end luxury vehicle, you are likely looking to pick up a used car. (PS: I am a proud owner of a Audi Q5 Hybrid).

Used cars and truck prices continued their climb higher, rising 7.3% on the month and 29.7% for the past 12 months. The new vehicles index increased 1.6%, its biggest-single month gain since October 2009 and was up 3.3% for the 12-month period, the highest move since November 2011. A separate gauge that excludes volatile food and energy prices increased 3.8%, vs the Dow Jones estimate of 3.5% for so-called core inflation. That was the fastest pace since May 1992.

If markets were expecting the Fed to begin introducing a hawkish tone at next weeks FOMC meeting, then they would have dropped on the release of the CPI data. The market seems to think that cheap money and current monetary policy will remain.

The Fed has been largely ignoring these large inflation numbers. Saying that this inflation is transitory. Partly due to higher oil prices, but the thinking is that with economies slowly re-opening, consumers will spend more money on goods. This will cause prices to rise as supply chains will need to catch up. Fed thinking is that once consumers cool down a bit, and start transitioning from spending on goods to services, the transitory inflation will disappear. And then we will see that real inflation data still is below the 2% target.

Or you can adopt my thinking: there is more debt out there that the Fed is trapped. They cannot increase interest rates. A lot of cheap money headed into speculation. A rise in rates could cause a ‘taper tantrum’ where markets sell off which could damage some pension funds, who have had to buy stocks since they are not meeting their 8% return targets buying bonds, and trigger some sort of financial crisis.

The only problem with my thinking is that the Fed will need some sort of excuse to continue their current policy. Something that indicates the recovery is stalling or not going well as planned. How many more times will the Fed be able to use the transitory inflation excuse when a lot of people are seeing prices rise?

Billionaire fund manager Stanley Druckenmiller sees things differently. He says that, “The market is not speaking right now on May’s CPI data and will not until the Fed stops cancelling market signals and at that point we will know”

NEW: Famed investor Stanley Druckenmiller to @JoeSquawk: The market is not speaking right now on May’s CPI data and will not until the Fed stops cancelling market signals and at that point we will know. pic.twitter.com/Yz9iozp5iI

What Druckenmiller is saying is that the Fed needs to TELL the markets that they are thinking of tapering. Right now, all these data points are being ignored because everyone knows cheap money policy will continue. Maybe it has to because of the points I brought up.

Hopefully some of this is cleared up at next weeks Fed meeting. But the Bond Market and the US Dollar are not expecting higher rates anytime soon. Some would argue this is a risk off move, but in that environment, I would expect the Dollar to rise too. 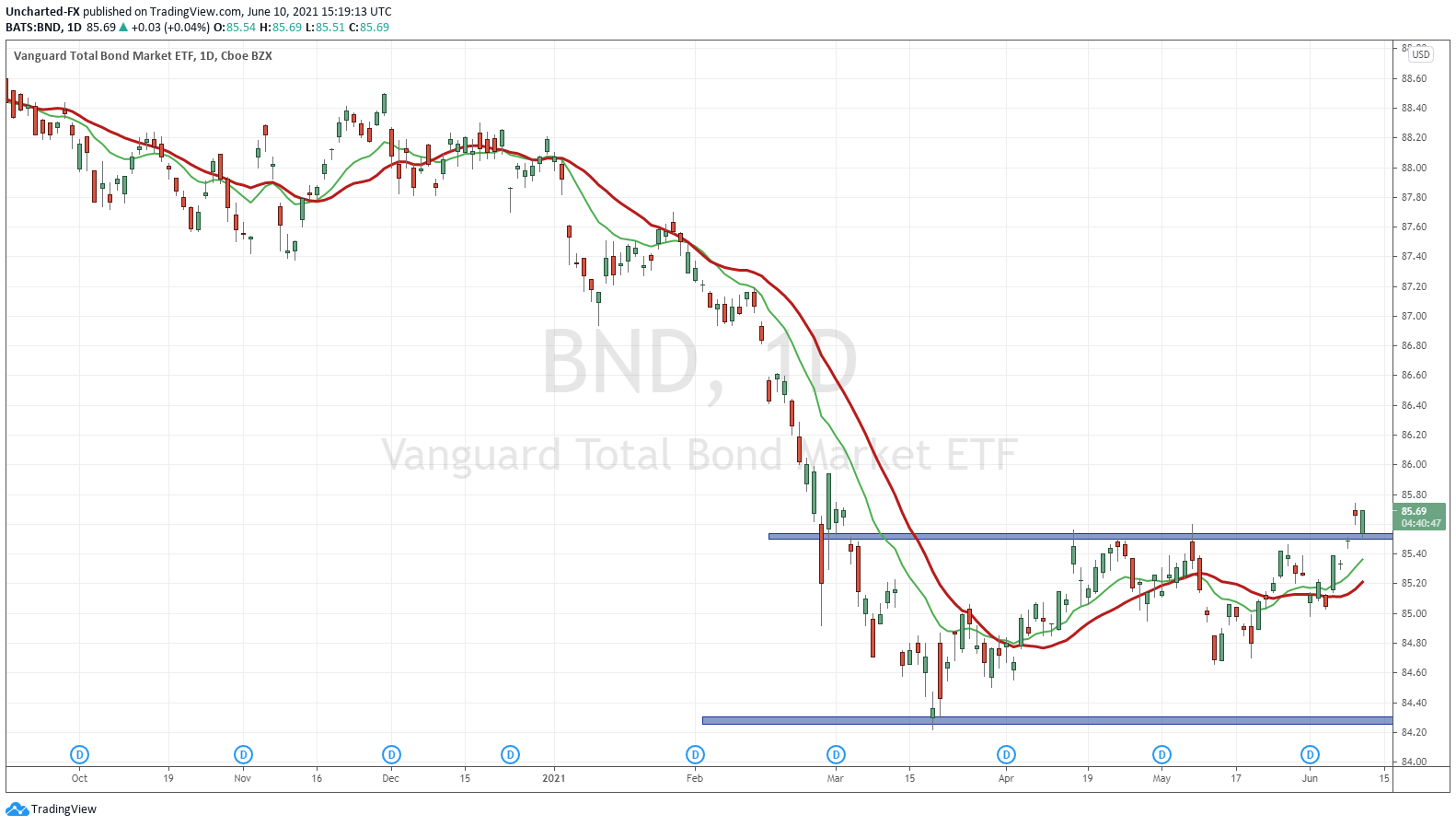 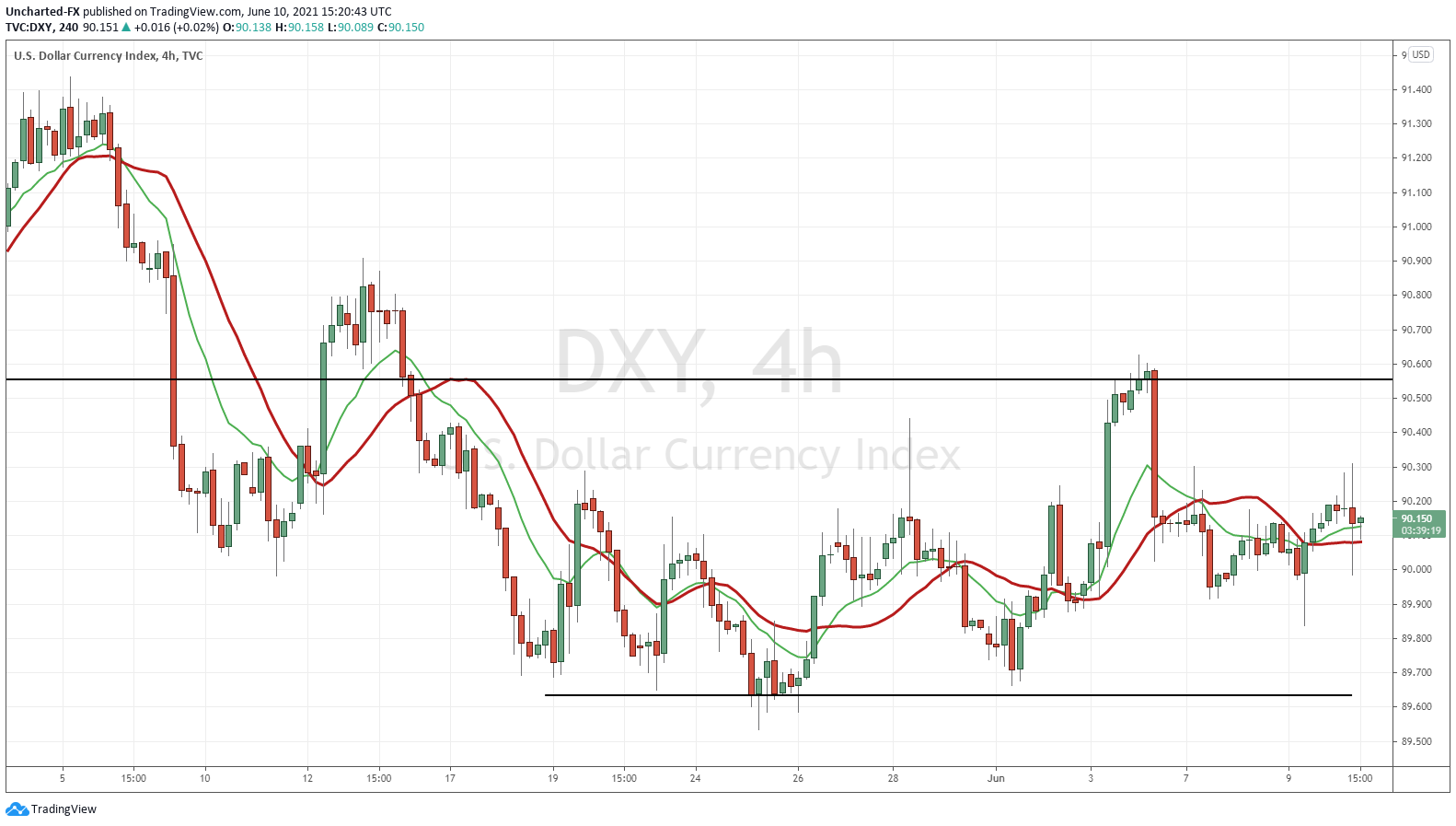 Dollar is choppy to say the least. However, longer term, we could be bottoming for a Dollar run higher.