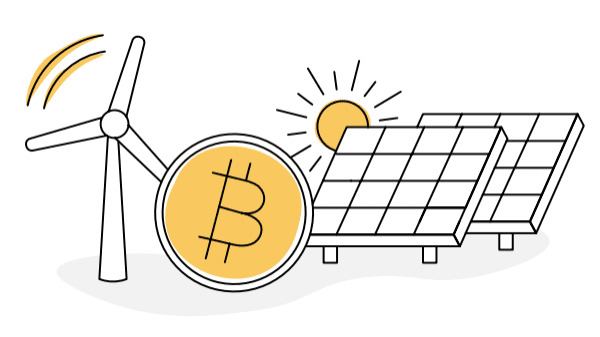 The problem with giving the cool kids power and attention in a market setting is they tend to bend and twist the situation to meet their agenda. Let’s take Elon ‘social responsibility’ Musk this month throwing his weight around on Twitter, causing Bitcoin (and Doge’s) price to dance like a marionette on a string, before suddenly retracting support and watching said marionette crumble into a bundle of sticks.

Worries about environmental calamity coming from Tesla (TSLA.Q) ring about as hollow as Musk’s performance on Saturday Night Live earlier this month. This coming from a company that sources its lithium in not-exactly environmentally (or human rights) responsible China, and their cobalt from the Democratic Republic of Congo—known for corruption and child labour issues.

Regardless of Musk (and Tesla’s) peccadilloes, which have been well-covered within these pages, he’s not wrong about Bitcoin’s potential for environmental damage. The power consumption data surrounding Bitcoin mining has it wedged somewhere between the entire output of Argentina and Saudi Arabia.

If companies were to stay in their lane environmentally and focus on reusable energy sources like hydroelectricity, then proof-of-work consensus mechanism using coins wouldn’t necessarily need to be put on blast.

But most of the hashrate isn’t mined in North America where the people can have a limited say on how and where their bitcoin is mined. In fact, a lot of it is mined under regimes that couldn’t care less about  environmental responsibility—and specifically, we’re talking about China here, but also Iran, which isn’t exactly a big proponent of hydroelectric sources of energy.

But the best companies know that opportunity lies in abdicated responsibility, and here’s where the partnership between DMG Blockchain Solutions (DMGI.V) UK-based global cryptominer Argo Blockchain (ARB.LON) and the Crypto Climate Accord (CCA) can make a difference.

Here’s a video on the CCA:

They have teamed together with the CCA to promote the decarbonization of the cryptocurrency industry. DMG and Argo are taking responsibility by developing a new working group to clearly work out the outline of CCA’s objectives, while using new tech that makes it easier to see which companies are using renewable energy instead of environmentally unsafe fossil fuels.

“As more data continues to surface regarding bitcoin and bitcoin mining’s impact on the environment, it’s imperative that the industry takes real, tangible action,” said Peter Wall, chief executive officer of Argo. “The Crypto Climate Accord helps lay the groundwork for that action and we are both eager and determined to ensure that supporters and signatories remain committed to the CCA’s goals.”

The CCA intends to reduce the carbon footprint of the global crypto industry, prioritize climate stewardship, and create the opportunity for the entire crypto industry’s transition to net-zero greenhouse gas emissions by 2040. That’s a huge task and a momentous responsibility. They’ve outlined the following goals in addition:

Last month, the founding members of the CCA committed to making the crypto industry powered by 100% reusable energy, but there’s a valid question as to how much of this is legit, and more much is greenwashing. Or even worse—how much of this is actually possible. Let’s consider for a moment that anywhere from two-thirds to three-quarters of Bitcoin miners are in China, depending on what source you’re using, and China isn’t exactly well-known for its spirit of global generosity, utilitarian spirit and environmental responsibility.

“We are ready to roll up our sleeves and begin developing new solutions in support of the CCA. Based on early industry feedback about the CCA, we know that this green hash rate solution is critical to assist individual mining facilities prove their use of renewables and the industry as a whole to set an example for other industries to follow. We look forward to working closely with DMG, Argo, and other CCA supporters to develop this solution and introduce it to the market as quickly as possible,” said Jesse Morris, chief commercial officer at Energy Web.

The organization has more than 40 organizations involved, including DMG and Argo, and they’re working towards the stated objectives by promoting renewable energy options, such as changing to a different source of energy (like DMG and hydroelectric) or a different less power intensive consensus mechanism (like proof-of-stake).

“Since our inception, DMG has been committed to transparency and good governance. Partnering with the Crypto Climate Accord alongside Argo allows us to apply those values to put us on a path to become a more sustainable industry. Together, we can finally put the wheels in motion to transition the cryptocurrency industry into one that focuses on renewable energy,” said Sheldon Bennett, chief executive officer of DMG Blockchain Solutions.

Transparency and good governance are definitely a positive start. The China (and Iran) issue may be out of reach for a group such as this, so collecting 100% green compliance may be more fancy than fact, but what they can do is focus on what’s going on in their own house before looking to the neighbours. The United States is second in cryptocurrency mining, and there are a number of different cryptocurrency operations relying on an outdated power grid running on fossil fuels.