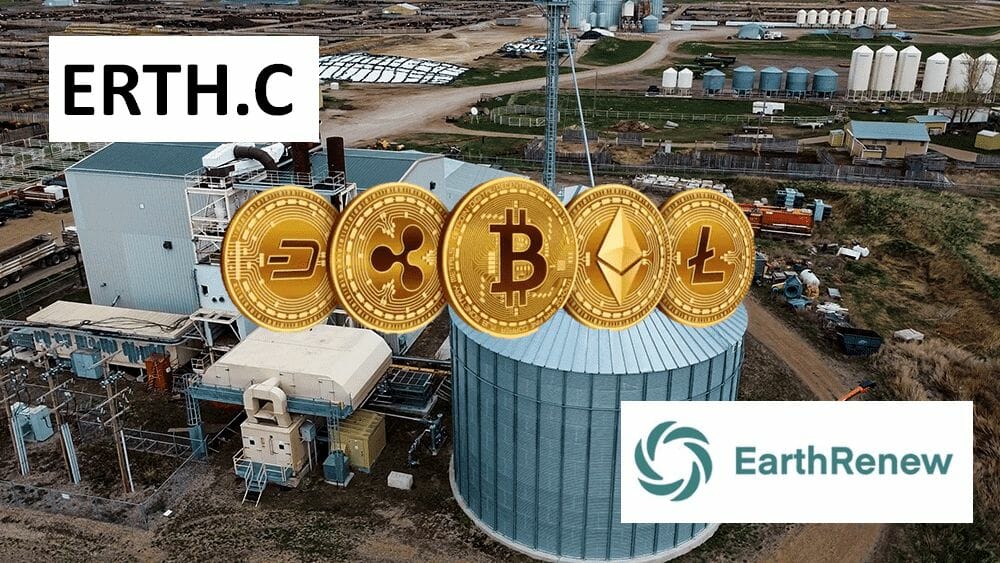 In your wildest dreams, can you conjure up a revenue-generating business that links cow manure with crypto-currency?

Don’t worry – Earthrenew (ERTH.C) has connected the dots for us.

Earthrenew takes a biologically compromised product (cow shit) that is trapped in local markets, and frees it into a pure organic product that can be transported across provincial and state lines.

The cryptocurrency mining company gains access to a portion of the ERTH’s power production, while this still allows EarthRenew to take advantage of power peaking opportunities.

Power-peaking has been a good source of revenue for EarthRenew.

EarthRenew’s operation as a peaking plant (whereby electricity is only supplied by the plant to the electrical grid if certain minimum power price thresholds are met), allowed the Strathmore facility to generate a 77% gross margin on electricity production.

“For January and February 2021, EarthRenew generated 845.17 MWh of electricity which it sold into the provincial grid for an estimated $342,727 in electricity sales revenue,” reported EarthRenew on March 31, 2021.

Also, on March 31, 2021 Earthrenew announced a deal with the North American division of the electricity company, Enel-X, to be involved in an operating reserves program in Alberta,”.

ERTH will be compensated for providing short-term power supply to the Alberta power grid.

“Looking ahead, we plan to supplement our electricity peaking revenue by participating in the operating reserves program with Enel-X. This will allow us to further optimize revenue, without sacrificing our ability to take advantage of peaking events,” stated Driver.

“Earthrenew is going to continue providing power to Alberta’s grid when electricity prices are up,” wrote Equity Guru’s Joseph Morton, “But this program will give them the opportunity to make more money when times aren’t optimal for generating power.

“As a result of the power sales agreement revenue for power generation at the Strathmore facility is now forecast to exceed $1.3 million dollars for the 2021 calendar year, up from $506,000 for 2020,” stated ERTH, “The corresponding gross margin for 2021 is estimated at 40%.” 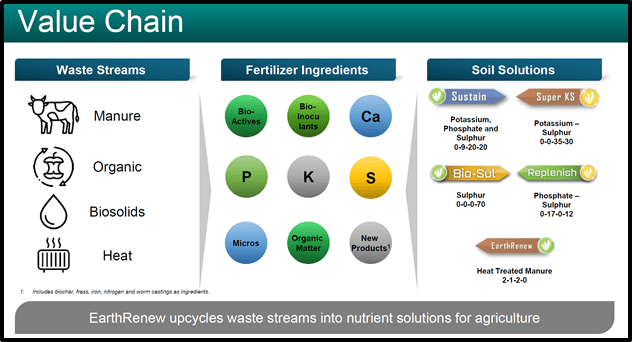 From an investor’s perspective, the “organic” subplot changes this from a niche green business into a something with a clear blue-sky story.

About 12 million square miles of the earth’s surface are currently arable (farmable). Due to the encroachment of suburbs, arable land is being lost at the rate of over 38,000 square miles per year.

Land devoted to organic farming is tilting hard in the opposite direction.

“The U.S. organic sector posted a banner year in 2019, with organic sales in the food and non-food markets totaling a record $55.1 billion, up a solid 5% from the previous year”.  That’s double the sales of a decade ago.

Last month, ERTH announced that it has negotiated an increase to its proposed equity ownership stake of Replenish nutrients from 38% to approximately 100%.

ERTH anticipates that Replenish Nutrients will continue to operate as a marketing and distribution company as a wholly owned subsidiary of EarthRenew. 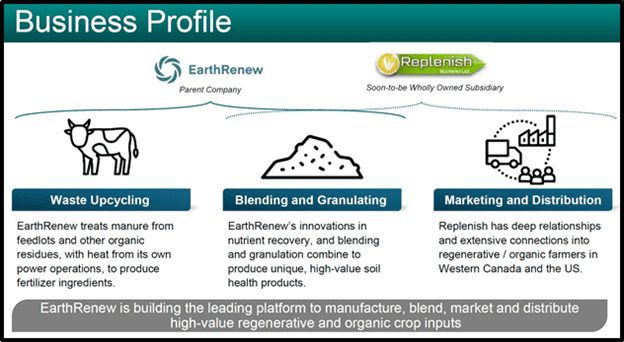 “Cryptocurrency mining is a way for the Company to utilize the unique asset at our Strathmore facility while we pursue our primary objective of building a regenerative fertilizer business,” CEO Keith Driver commented on the April 23, 2021 news release, “We are excited to have found an off-take partner that was such a good fit with our power production plans.”

“We anticipate that this arrangement will allow us to run the Strathmore unit more consistently, ramping production up when power pricing is at a premium.”

“This, along with our agreement with ENEL-X, announced in a press release dated March 31, 2021, is projected to allow us to maximize the utility of our power generation asset as we scale our business,” added Driver.