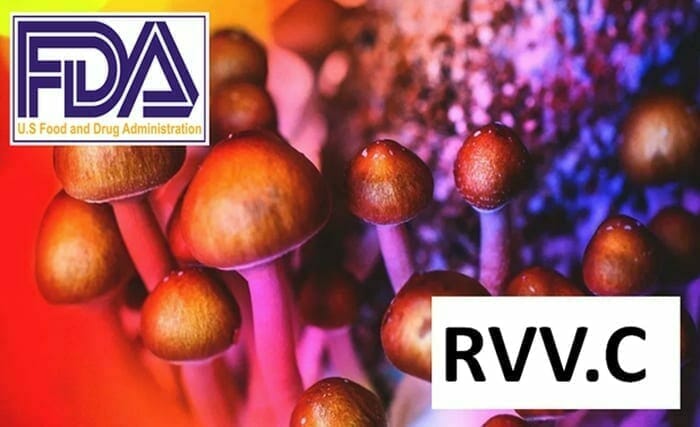 On November 11, 2020 Revive Therapeutics (RVV.C) Revive Therapeutics updated shareholders on its oral thin-film delivery system with psilocybin being developed “under a research partnership agreement with Reed Research Group out of the University of Wisconsin-Madison”. 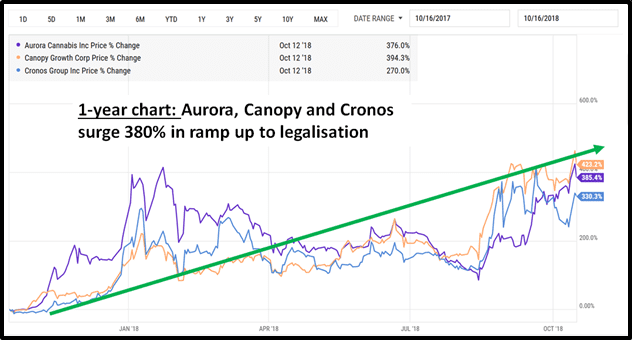 “There is a significant market opportunity for our unique oral thin film strip technology for not only delivering psilocybin but also delivering numerous psychedelic-based medicines to treat various diseases and disorders that would benefit from such a delivery method,” continued Frank.

RVV plans to partner with life sciences companies seeking to add unique offerings in their psychedelic-based product pipeline and with companies operating in the U.S. where psilocybin therapy use is legal.

RVV is also exploring the use of Bucillamine for the potential treatment of infectious diseases, with an initial focus on severe influenza and COVID-19. 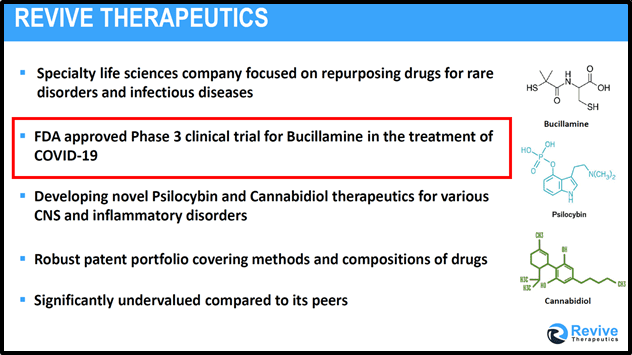 Preclinical and clinical studies have demonstrated that bucillamine can significantly reduce the negative symptoms of respiratory viral infections in animals and humans.

Revive has identified bucillamine as potentially useful in the treatment of COVID-19.

With the FDA’s approval, Revive has set-up five clinical sites in Florida, Texas and California for enrolment of patients in the phase 3 clinical study.

It is also finalizing agreements with an additional 10 clinical sites in these states, including Arizona and Ohio. 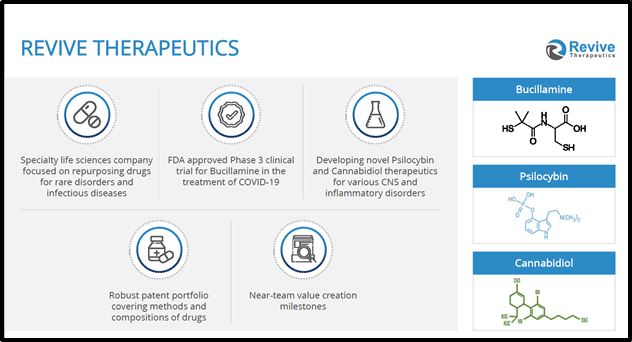 Three weeks ago, RVV signed a supply agreement with Havn Life Sciences (HAVN.C) to source naturally-derived psychedelic compounds, such as psilocybin, for use in future investigational new drug enabling studies and clinical trials under FDA guidelines.

“We are excited about our strategic partnership with Havn Life as one of our suppliers of psychoactive compounds that we intend to develop and commercialize using our established tannin-chitosan based proprietary oral-thin film delivery system, for the pharmaceutical and wellness markets,” stated Frank.

We are thrilled to have signed this supply agreement with Revive Therapeutics to help further their work in this field,” added Susan Chapelle, Co-CEO, Havn Life, “Both of our companies are leading innovators in the space, and we look forward to helping Revive achieve their goals with our compound supply.”