Chaos. No clear or clean cut winner. Lawsuits and the judiciary getting involved. Very likely calls for recounts. And finally, the losing party potentially not accepting the results. This is the state of the US Presidential Election 2020.

270 electoral votes are needed to be able to sit behind the Resolute desk, and currently, Vice President Biden is leading President Trump 238 to 213. While we may get some final vote counts today, other States could take a few days.

The one thing the stock markets hate is uncertainty. If this vote count takes us past Friday, it just increases the uncertainty. As well as the fact we may get a contested election. In yesterday’s Market Moment post I outlined the three election scenario’s, with 2/3 being stock market negative. Those two were either a delayed result (what is happening), or a contested election (what is probably coming next).

The only argument one can make about stock markets remaining higher is that the market has stopped caring about who becomes the next President. Because it really does not matter. Regardless of whomever wins, more cheap and easy money is here to stay. There may be varying degrees in the amount of money (Biden would be the bigger spender), but the broader picture regarding economic and fiscal policy remains the same.

Expect market volatility with the headlines of vote counts and possible recounts, as well as the aftermath. From the latest Zerohedge Election update, this is what we are waiting for:

Once again, the polls were wrong. The media was hyping up a “Blue Wave” and an easy Joe Biden victory. Instead, it has come down to the wire.

To me, the markets were either pricing in the information from the polls (a Biden victory), or a clean and decisive election with a winner declared on election day. The latter did not happen, but the former is still in play. What will get really interesting on the politics side, is the possibility of a Biden Presidency but a Republican controlled Senate.

Alluded to earlier, but the stock markets are STILL holding onto their gains. In fact, at the time of writing, the S&P and the Dow Jones are breaking out intraday, while the Nasdaq remains strong and holds onto its 3% overnight gains.

What I am watching are these two charts: 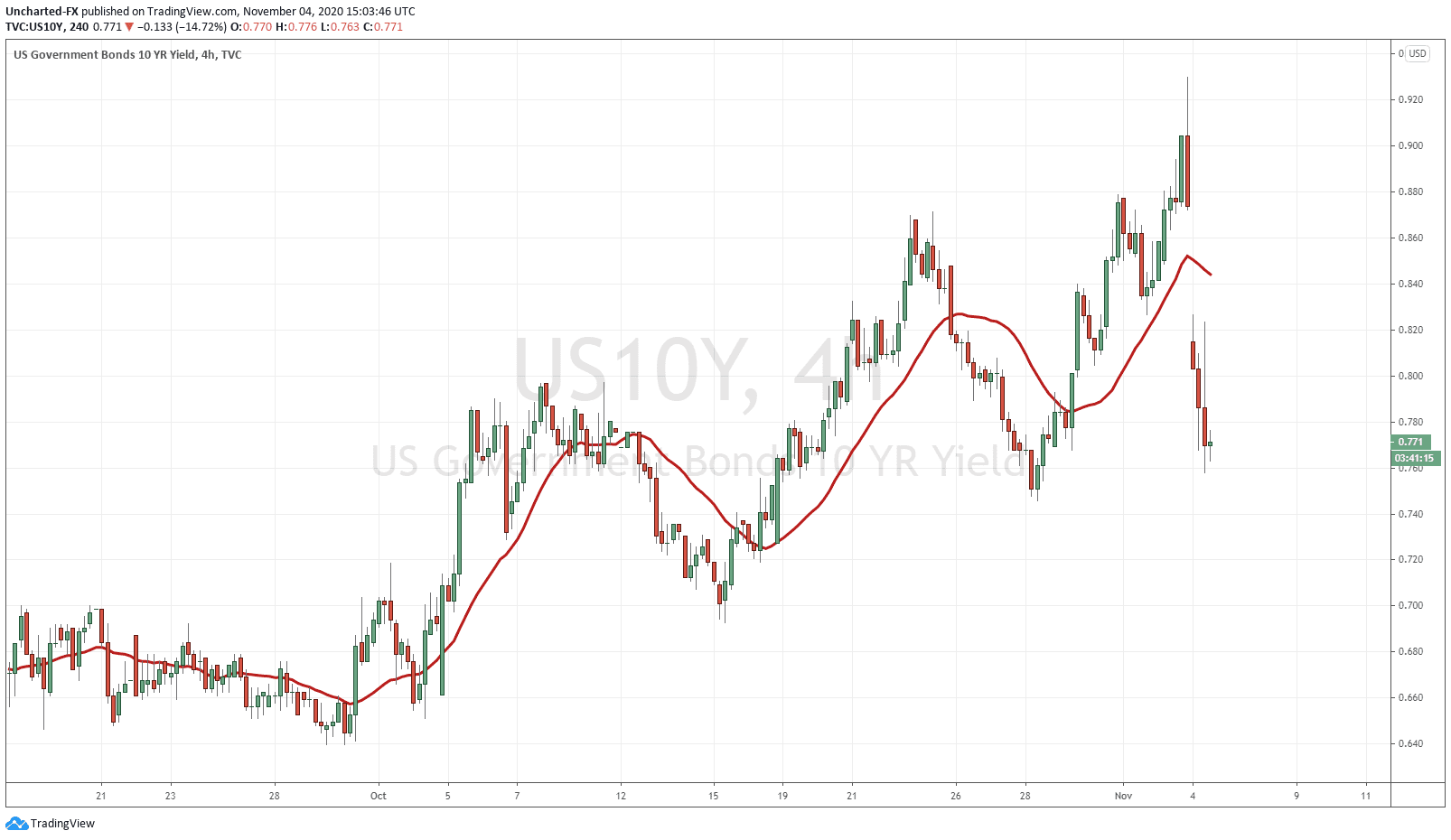 My readers know my fascination with the bond/debt market. It is the best way to track money flows, and whether we are in a risk off or risk on environment. Since the asset allocation models used by funds still adhere to the stock-bond split, the debt market gives us more insight on market sentiment.

Well the 10 year yield was down -15% overnight! What this means is that money was heading into the SAFETY of bonds. This cash likely left stocks to enter bonds…but the stock market is not showing a move lower yet. What I will be watching very closely, is the 10 year yield price action today. On the chart above, we are at a support zone here at 0.76. If we get a bounce, stock markets will remain strong and hold onto their gains. If this drops much lower, watch out below for equities. 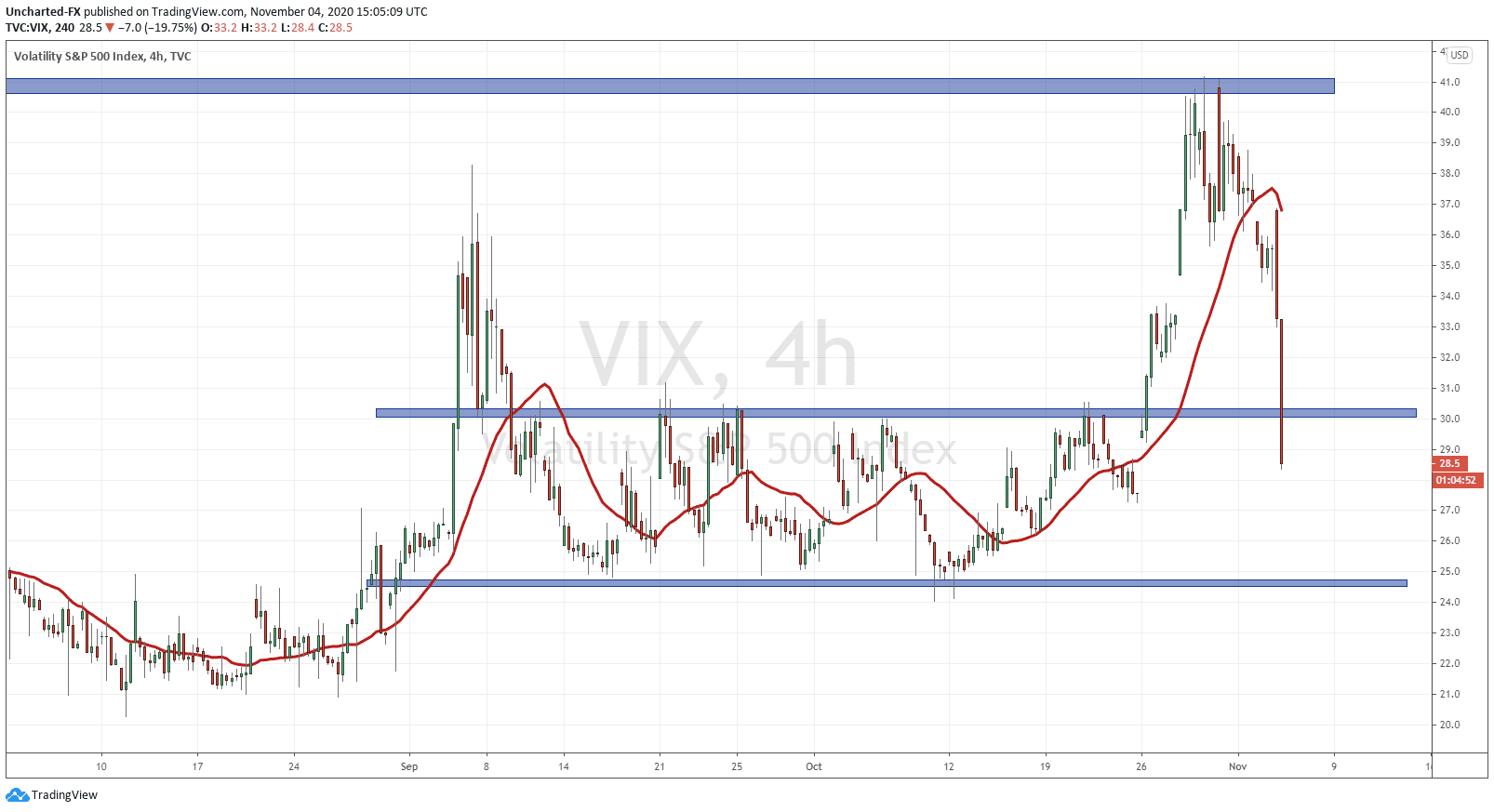 This is perhaps the chart that has surprised a lot of people. The volatility index (VIX) is indicating NO fear in the markets. That there is no uncertainty currently for market participants. Now the VIX is down 20%! Big move lower, which has taken us below a support zone of 30. Wow! As this is happening, the S&P 500 and the Dow Jones have made new intraday highs, and the Nasdaq and the Russell 2000 are looking to do the same.

In summary, not the market action many were expecting given the events of the last 24 hours. We shall see what happens when votes are being counted, but I must stress: do expect volatility. If I see markets continue to rise on headlines which point to uncertainty, I will be able to say that my theory on markets ONLY caring about cheap and easy money is in play, and the markets really do not care who wins.

Would not be surprised to see one of the candidates come out and declare a victory…perhaps even prematurely. LONG time readers know my take on Gold. I have said Gold will rise eventually when confidence is lost in government, the central banks and the fiat currency. The division in American politics and society means that the likelihood of civil strife is real. Trader jargon: it has a high probability. If the other side does not accept the results, we would be seeing an erosion in confidence of government, and the beginning of a larger confidence crisis in institutions.