US Presidential Election: 3 Scenario’s and the Stock Market Impact! 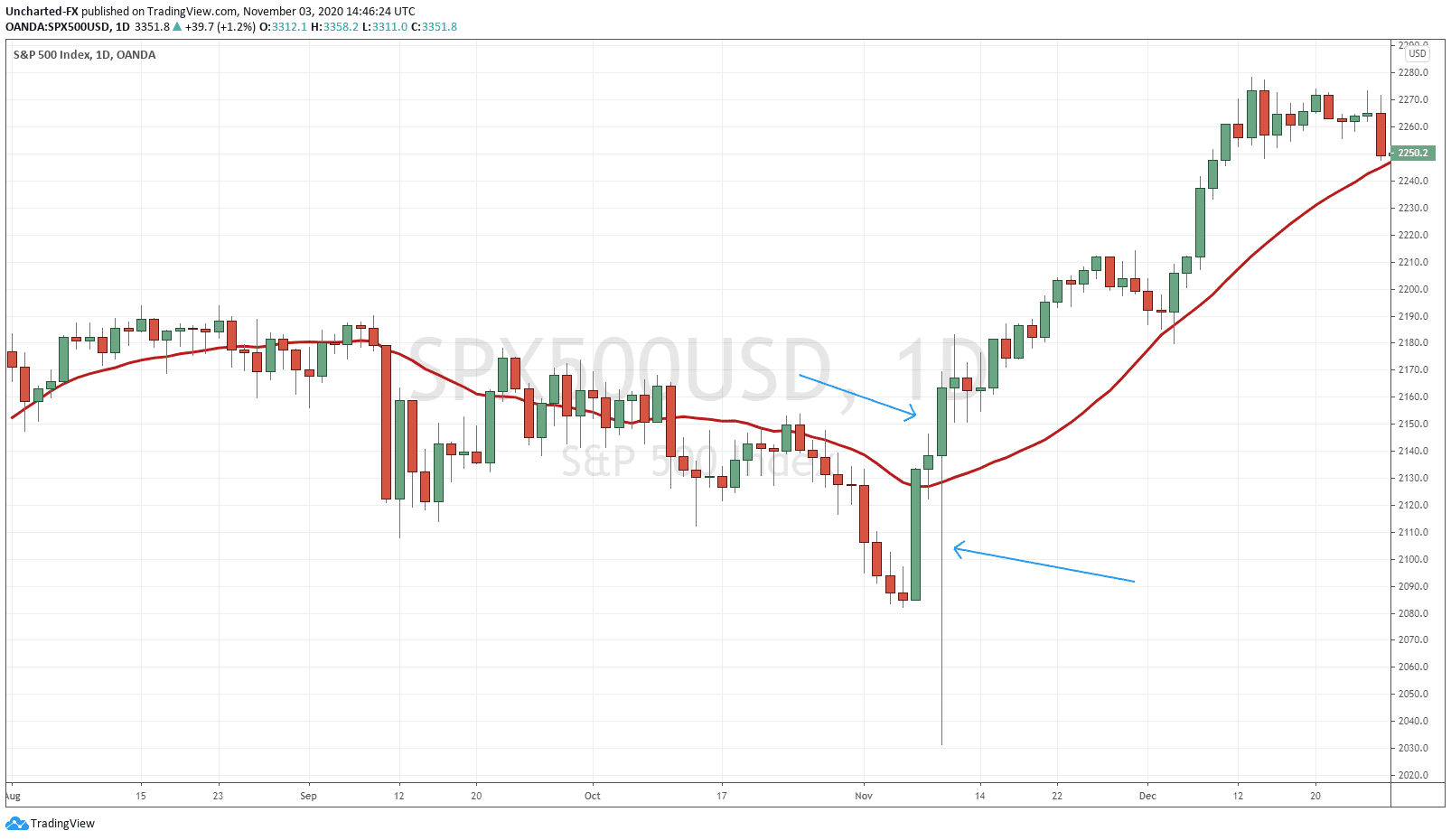 “And so it begins”. This was the King Theoden Quote from Lord of the Rings which my post from yesterday was lacking. I discussed how there are many high risk events this week, but the US Presidential Election tops the list. If there is one thing the stock markets hate, it is uncertainty. Not knowing who is going to win the election, and also how the market may react to that win just screams uncertainty. Do expect some volatility overnight and into tomorrow morning, but perhaps the stock markets are already pricing in a victor?

Before we get into the scenario’s and how the markets are reacting currently, let’s take a look at how stocks performed on the previous election day in 2016.

The arrows are pointing to the daily chart which includes overnight election price action, and the subsequent US stock market session the day after. If you recall, the polls and the media were telling us of a Hillary Clinton and Democratic party victory. Nobody was giving President Trump a chance, and when it started to come out that he was winning, and the media and polls were wrong, the markets began to sell off. Initially.

Markets then pulled off a spectacular reversal as they began pricing in things such as tax cuts and corporate tax cuts. Small business sentiment also spiked up due to a Trump victory, and this plays a large part in Trump’s victory. If the economy was as strong as Obama and the Democrats said it was, Hillary would have won the elections. The 2016 election and even the Brexit vote were people saying they had enough and were voting for the opposite, due to economic conditions. For people who still doubt this, take a look at the US Labor Participation Rate from 2008-2016 and try to convince yourself that there was a recovery. There was either no recovery OR a policy which explains all of this. There was, but that will be for another post.

Currently, markets are acting as if there is no fear at time of writing. The 10 year yield is moving higher, indicating money is LEAVING the safety of bonds and either remaining in cash, or going into stocks and commodities. The US Dollar is dropping, and the VIX is also down 6% indicating fear is receding. 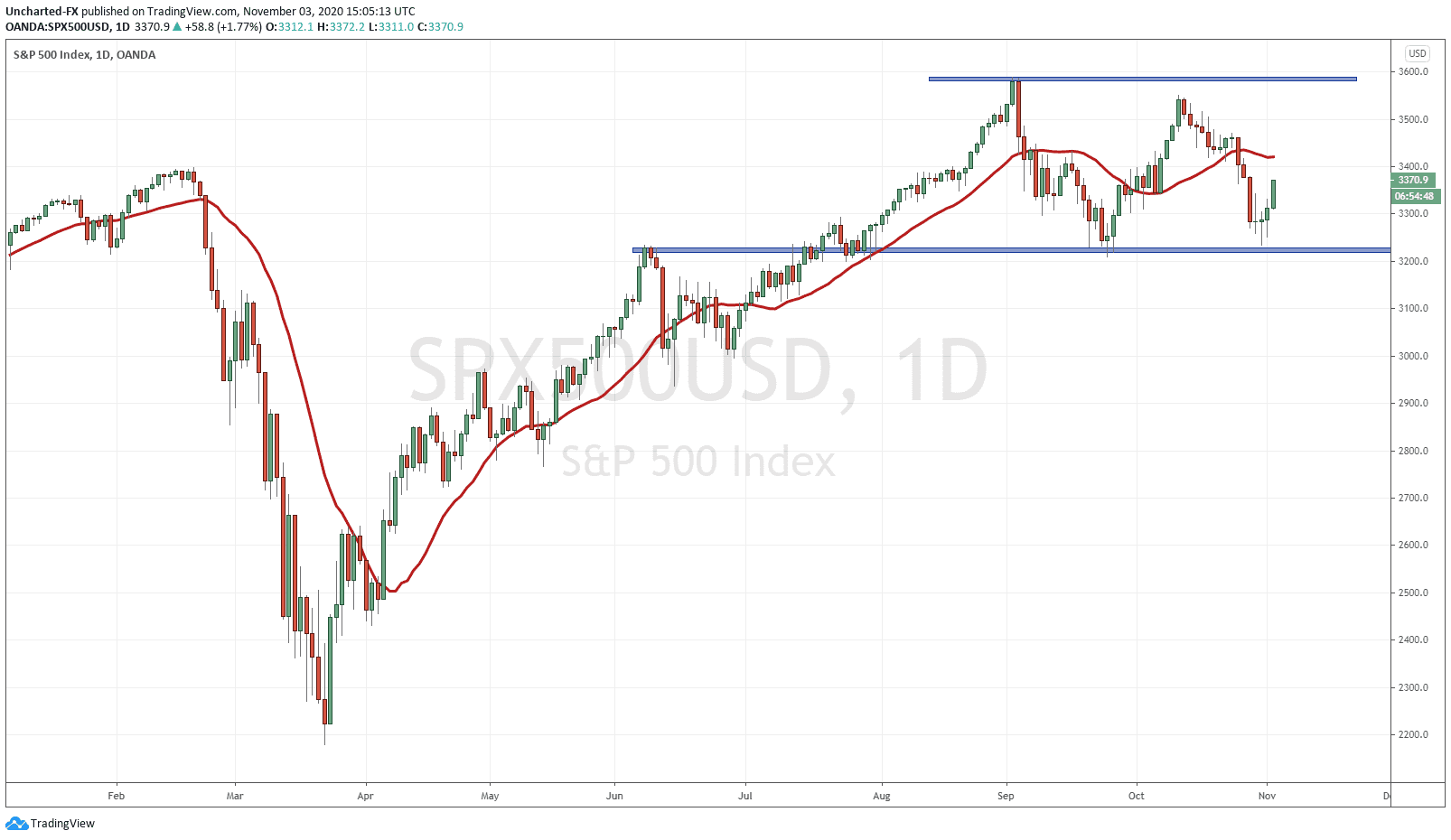 Last week, I spoke about the potential “cuckening” and new bear trend IF we closed below this support zone which I have drawn out. All US indices displayed the same type of double topping reversal pattern. However, we have bounced above these zones for now.

If you recall from my “cuckening” post, I mentioned the Oil chart was key to a lot of this. It seemed the US equity markets were pricing in a second lockdown. This would occur under a Biden presidency, who has said he would shut the country down a second time…and some how that would be great for the economy and economic recovery. This statement alone is likely why Trump may pull another upset if you are using the polls and media for your reference.

As I said, economics was what gave him the victory in 2016 and also was why the Brexit vote surprised people. Most people with some basic economics sense understand shutting down the country for weeks is bad for small business’ and the economy in general. This will show up in the vote. 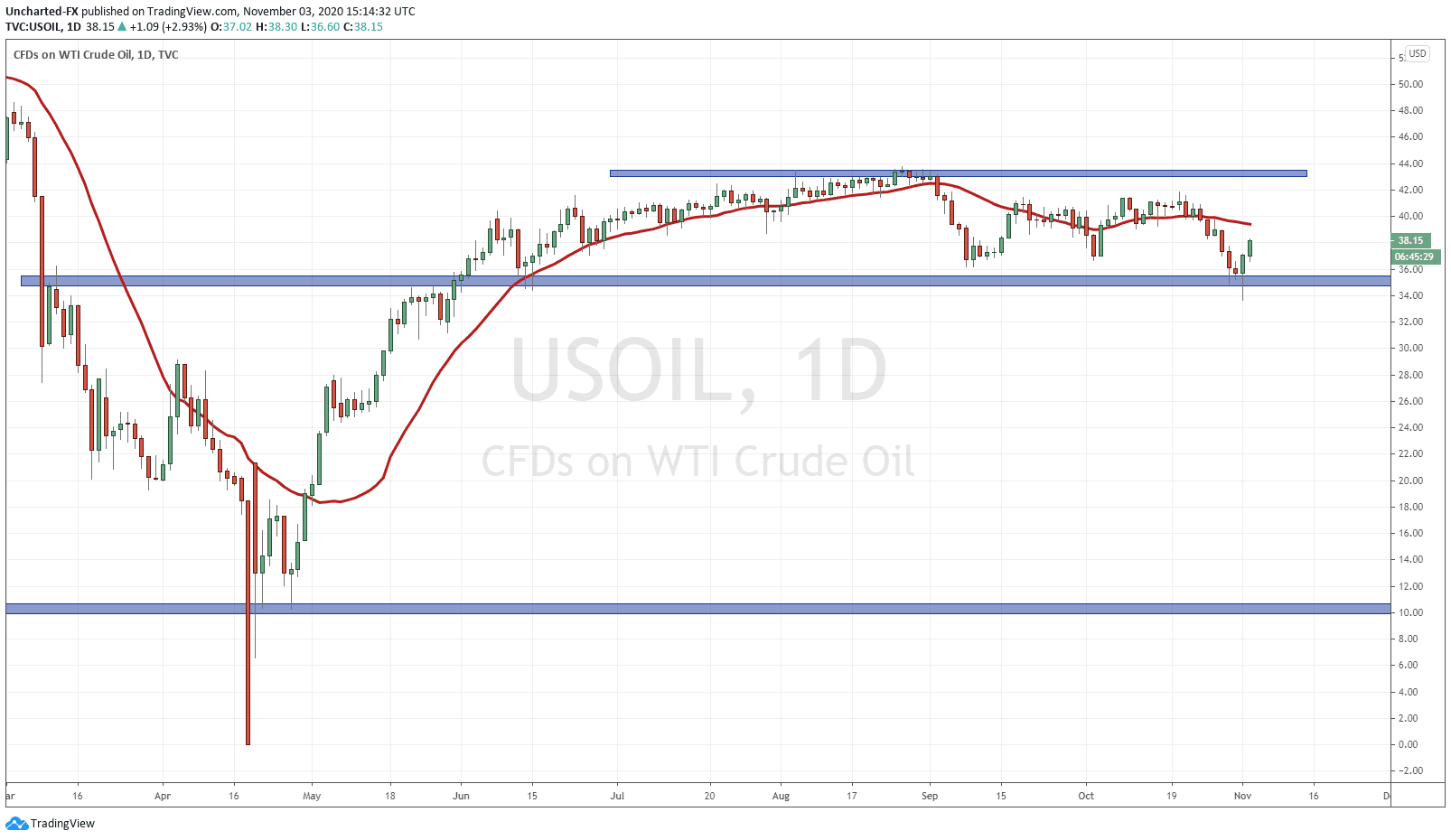 To back that point up, oil managed to hold our support zone. This is pointing to no second lockdown in the US, and likely a Trump victory. If a second lockdown was in the works or being priced in, oil would have broken below support and tumbled (along with stocks). Why? Simple. Another lockdown means supply glut and storage facilities packed to the rim, which would see oil repeat its move down to 0 during the first lockdown.

If a Biden victory occurs, expect oil to breakdown as it prices in another lockdown similar to some European countries.

So I promised to discuss 3 scenario’s of how the US election plays out, and how that will impact the markets. Let’s do that now.

Firstly, the most stock market positive case is a CLEAR CUT victory for EITHER party. If this happens, a lot of uncertainty wears off the markets. We then go back into the mode where markets look for more cheap and easy money. Regardless of who wins, we know more money printing will have to occur. This means that stock markets become the only place to go for REAL yield. Enter the Federal Reserve on Thursday. JP Morgan does predict that markets will continue to move higher after the election and uncertainty fades away.

In terms of the popular vote, a blowout in US Presidential elections would be a percentage of over 60%. Has only happened three times:

Secondly, we get a scenario where the victor cannot be determined for a few days. This may not cause a stock market sell off right away, but the markets would definitely be uneasy, and perhaps range for the first few days. If this scenario is prolonged, then we fall.

The way this would occur is obviously the mail in ballots. Because of mail in voting, there is a very HIGH possibility that we must wait for some of those ballots to come in. Funnily enough, economist Nouriel Roubini discussed this possibility and he predicts a stock market drop of 10%.

Thirdly, and the most worrying scenario which would see stock markets tumble: a contested election. Due to the division that we see today, it is probable that neither losing side will accept the election result. This would have ramifications for America geopolitically and even the US Dollar. The judiciary would have to get involved, and we would not be certain about who would be sitting in the White House.

Just playing the devil’s advocate, but the losing party could very well use the second scenario, the mail in ballots being delayed, to do some dirty things.

It will be a volatile day over night and then tomorrow for stock markets, so do be careful or take up some hedge positions.

The current stock market price action seems to either be pricing in what the polls are saying, a Biden victory, or just pricing in scenario one: a clear cut victory by one party.