Stock Markets Breaking Out on Hopes of More Cheap Money! 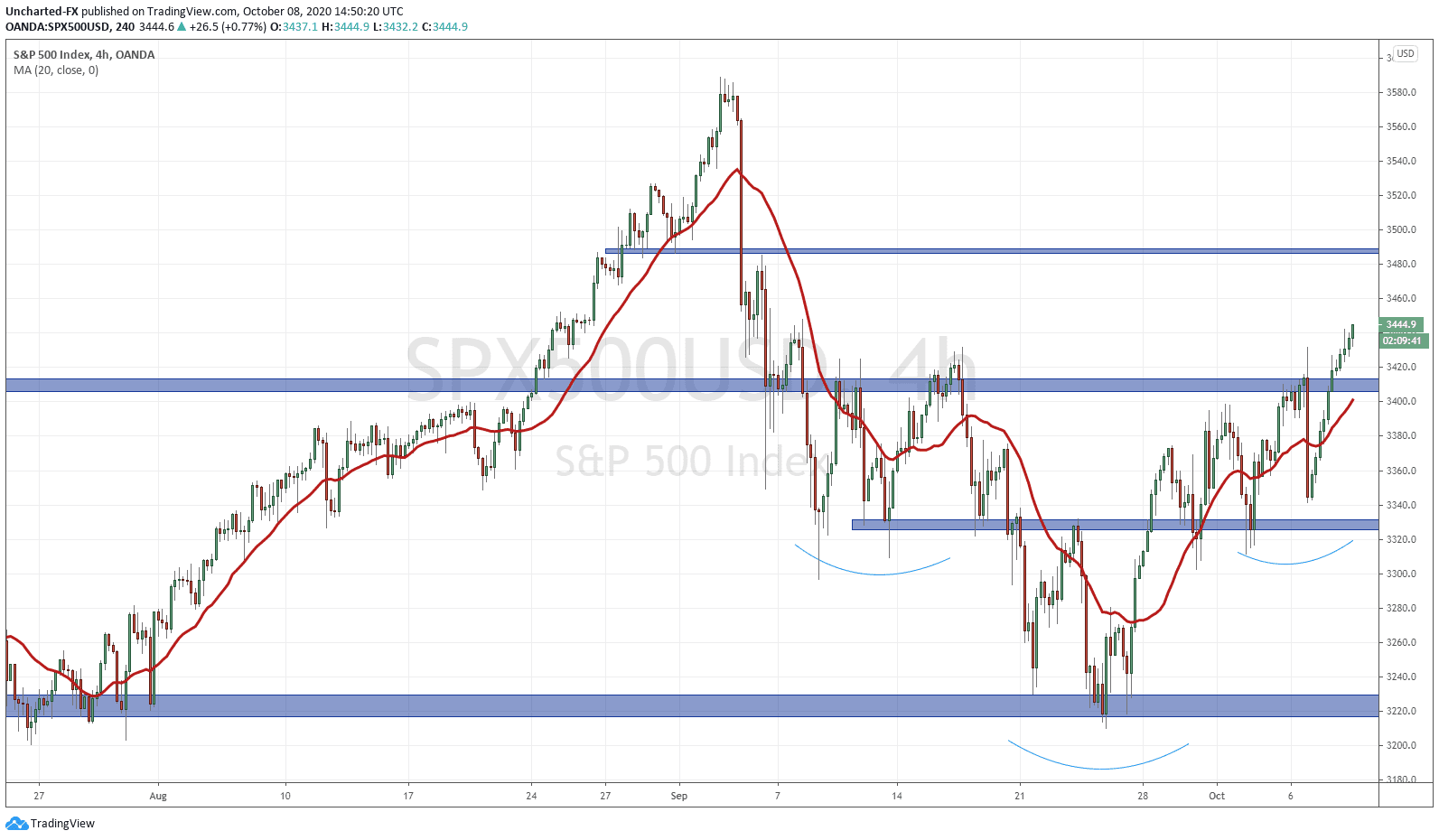 We have had quite the whipsaw and volatile week headline wise. It began with the President being discharged on Monday, and touting that there is a treatment for Covid. Then the drama the right next day: the President ordered all talks regarding a stimulus with the Democrats to be scrapped, on the same day Fed chair Jerome Powell came out saying we need more fiscal stimulus. Yesterday we witnessed the art of the flop. The President took to twitter to tweet about a deal being on the table and imploring both sides to get back to work. We heard that Nancy Pelosi and Steve Mnuchin were both resuming talks. It took less than 24 hours for the President to flip…maybe he saw the stock market reaction, hence the title Donald Pump.

Markets did indeed recover all their tweet losses yesterday and in fact, broke out much higher.

Today, we received news about the US economy jobless claims being at the pandemic lows of 840,000 for the week ended October 3rd.

An unadjusted 464,437 people also filed new claims under the Pandemic Unemployment Assistance Act, the federal law that temporarily made self-employed workers eligible for benefits for the first time. That put the number of actual or unadjusted new claims at 1.30 million, also a pandemic low.

New applications for unemployment benefits have gradually receded from a pandemic peak of 6.9 million in late March, but the weekly total has fallen by less than 100,000 in the past month. New jobless claims are still quadruple the pre-crisis average and are higher than any point during the severe 2007-2009 recession.

Evidence of the V-shaped/K-shaped recovery?

My readers by now should know the main thing that is keeping markets propped is the promise of more cheap money. Stocks will be the only place to go for yield, and I must say we have not even seen the move in stocks even yet. Sure, there will be headlines here and there which will add to the volatility, but it will not change the fact that more stimulus and money printing is coming.

I have said in the past that regardless of who wins, the promise of cheap money will make markets move up regardless. However, currently the market is pricing in a Biden victory. Wall Street will love it because it means larger government deficits and even MORE cheap money. If this begins to change, we may see markets dropping lower, but rest assured, they will pop just like they did when they were pricing in a Clinton victory but then Trump won on election day.

Going forward, the big trigger will be that stimulus deal. The hopes of that deal. The market is now expecting that cheap money sooner rather than later. If we see another scrapping of talks, the market will not like it, and will repeat another Tuesday type move. Eventually, this could lead to our US-China Trade deal type headline. Markets reacted violently on any US-China trade deal headlines, particularly when the President said the deal was off…but then back tracked and said the deal was on. Markets then didn’t care. We could be hearing similar type of headlines with this stimulus deal such as “new talks”, of “talks going well” etc. This would impact the real economy, but the stock market can still move higher as we have seen due to the hunt for yield.

Over on our Discord Trading Room, we have discussed this broader head and shoulders zone, and more importantly, the major resistance zone just above 3400. The trigger was a DAILY candle close above this zone. Check: we got that close yesterday. Momentum has carried and price is moving higher. There is a possibility we do pull back to 3400 for a retest before moving higher. I would expect the buyers to step in and defend this zone.

Target to the upside is 3490-3500. You can see we have a resistance zone there with two touches (twice as support, and once as resistance). 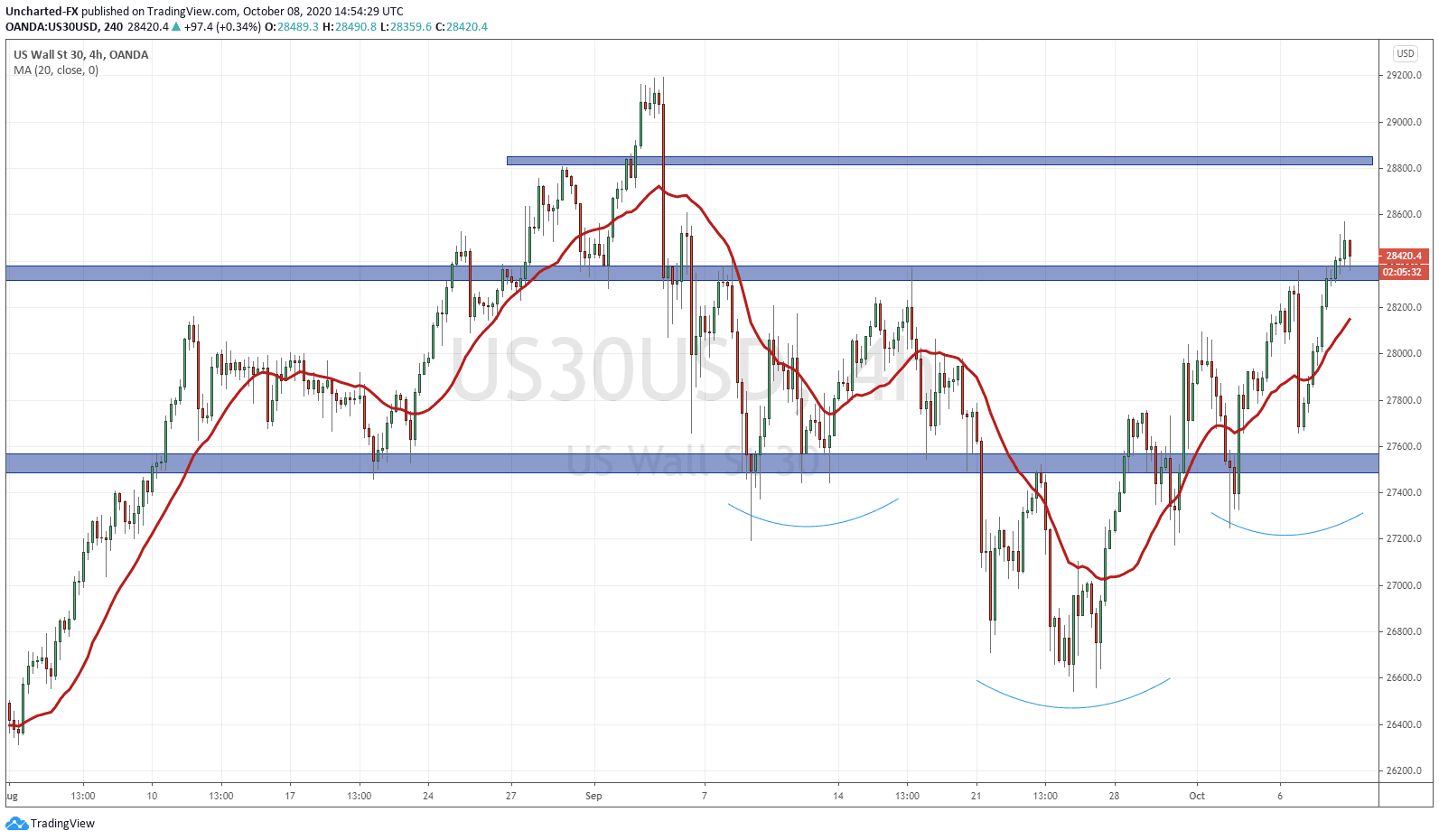 The Dow is one that is more appealing to those who would like to enter an equity trade right now. Unlike the S&P which is already moving higher from its breakout zone, the Dow is retesting its breakout zone of 28,400. I think it would be best to see how this candle closes at 10am PST (4 hour close) and see if the buyers are indeed stepping in. Alternatively, you could enter now with a tight stop loss. The candle close gives you a better probability of success since you will likely have a confirmed signal of buying. Buying now would increase your risk vs reward dramatically, but the signal is not concrete yet. 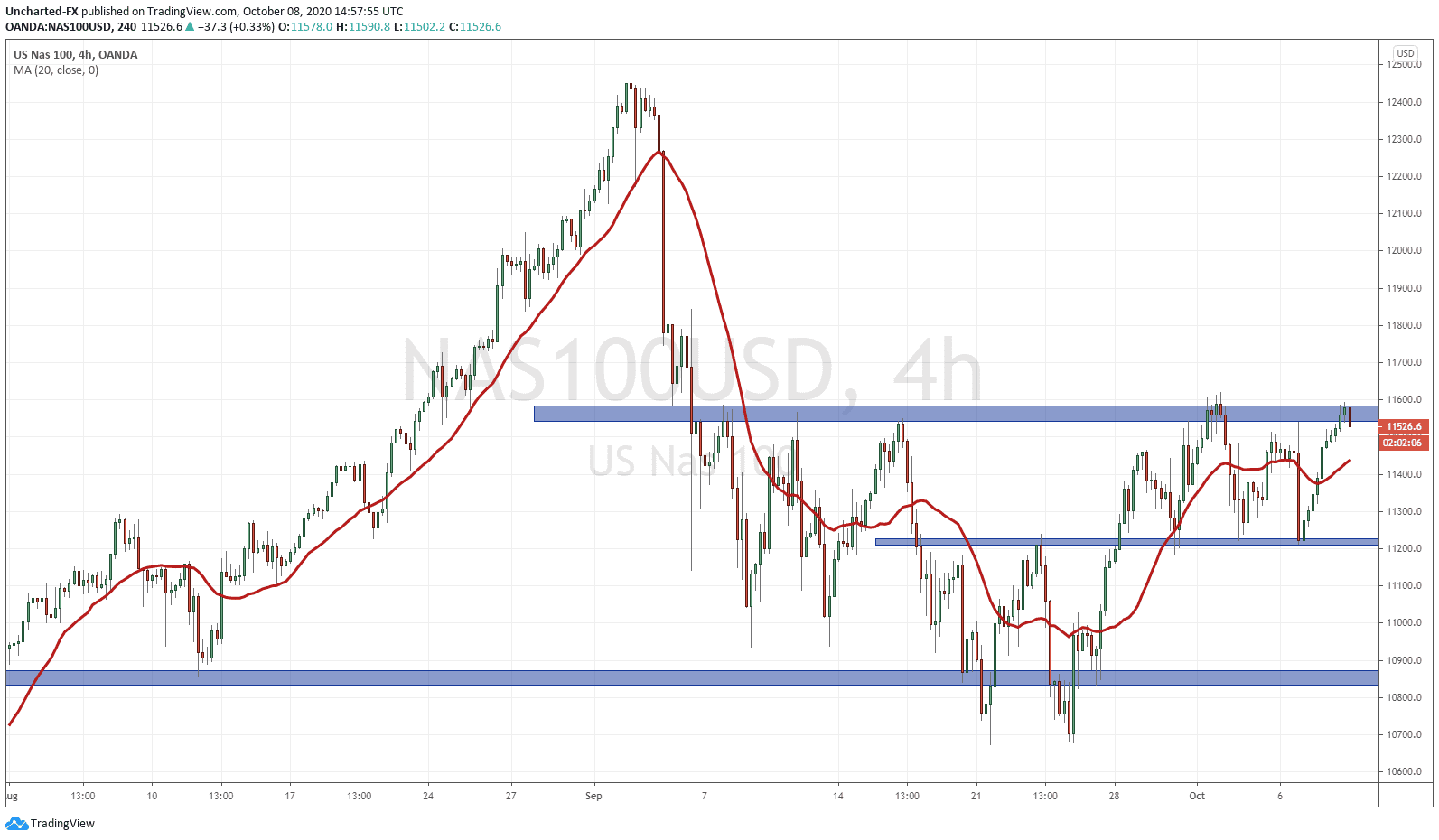 If you happen to miss both the S&P and the Dow, then consider the Nasdaq. Similar broader head and shoulders set up. However, we do not have the breakout yet. This will be confirmed with a close above 11,600. Since this is the 4 hour chart, I will take a look to see how we close at 10 am PST. If the breakout is triggered, it would be a buy.

The Nasdaq has some room to go above, but I would target 11,900 for my first target.