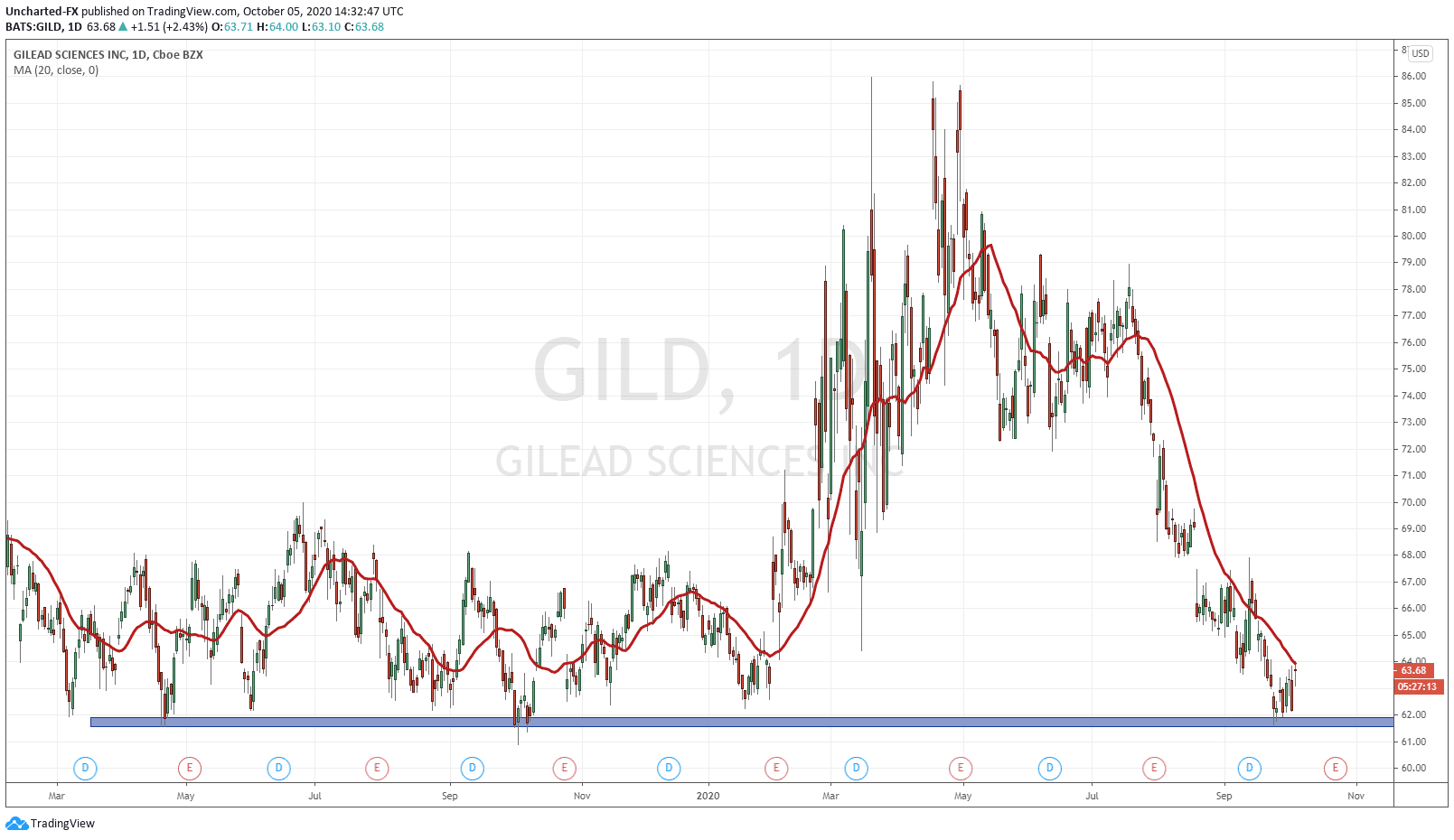 A lot of action in equity markets and from headlines in the past few days. On Friday morning, traders and market participants woke up to the news of President Trump and the First Lady testing positive for Covid-19. The markets dropped at first, as markets do hate uncertainty. Seemed to be just a headline and impulse move, as most markets did recover near the end of the day. As I have said many times in the past, equities just care about cheap and easy money. No surprise that on the same day, stimulus hope news was floated out and continues to be floated out, as the Republicans and Democrats hope to finalize a stimulus deal before the elections. However politics is definitely involved and there are many rabbit holes we can go down there, but let’s stick with the President Trump news.

The President was then moved to Walter Reed Hospital to treat his Covid symptoms. Theories about his health were making their rounds on Twitter. Even Michael Moore came out with some bizarre conspiracy theory stating the President was faking Covid in order to garner the sympathy votes and/or postpone the elections.

We were told that the President did suffer from symptoms such as a fever and a sore throat, but so far, it does not seem as bad as the UK’s Prime Minister Boris Johnson Covid scare. We are now hearing the President has made a spectacular recovery and could be discharged as soon as today.

If this were to happen… a boom in the stock markets. My followers know we watch the 10 year yield and the VIX to gauge fear and money flows in the markets. Well, the VIX did initially pop on Friday before selling off, and the 10 year yield is making a huge move higher indicating money LEAVING the safety of bonds and is either remaining in cash, or will be looking to enter the stock market. There is no fear.

This brings us to our trade idea. Gilead. The pharmaceutical company is known for its Covid drug Remdesivir, with many nations, including Canada, placing orders for the drug. It came out the the President was given many vitamins such as Vitamin C and Zinc, but that he was also given Gilead’s Remdesivir and also Regeneron’s Antibody Cocktail.

This is how I see this whole play: the President will recover from Covid in a very short timeframe. This will show us all that cCovid has a very high recovery rate even with people in the high risk candidate like the President, but more importantly, President Trump will be the poster boy for big pharma.

The hope is to alleviate the fear that people have. People are still afraid to go back to work even with their masks, so an effective treatment/vaccine is needed. This is where Remdesivir and the Antibody Cocktail may shine. If the President fully recovers with the aid of these drugs, we effectively have a treatment.

As soon as the President got Covid on Thursday night, many traders were already seeing this play out. The President would be discharged early, he will have taken drugs, he will then say we have a cure and Covid is really not a big deal and we can all go back to reopening and our lives.

If this plays out, stock markets will continue their bullish run.

Not only do we have fundamental positive news for Gilead, but the technicals look lit. I mean this is the type of set up I look for all the time.

Gilead has been in a downtrend after it broke below the 72.00 support zone. In this downtrend, we made multiple lower high swings, which has continued all the way down to the 62.00 zone. Look to the left, and you can see that the 62.00 zone is a very important support (price floor) zone.

Support zones (as well as resistance zones) act like magnets, and pull price in while they are in their trend. Once these zones are hit, we tend to see a higher probability of the trend reversing. We all know that price does not move in a straight line up or down. Price moves in cycles. A lot of confluences that the downtrend is over.

Ideally, I would like to see some sort of bottoming pattern. A double bottom or a longer range indicating that the buyers are stepping in. 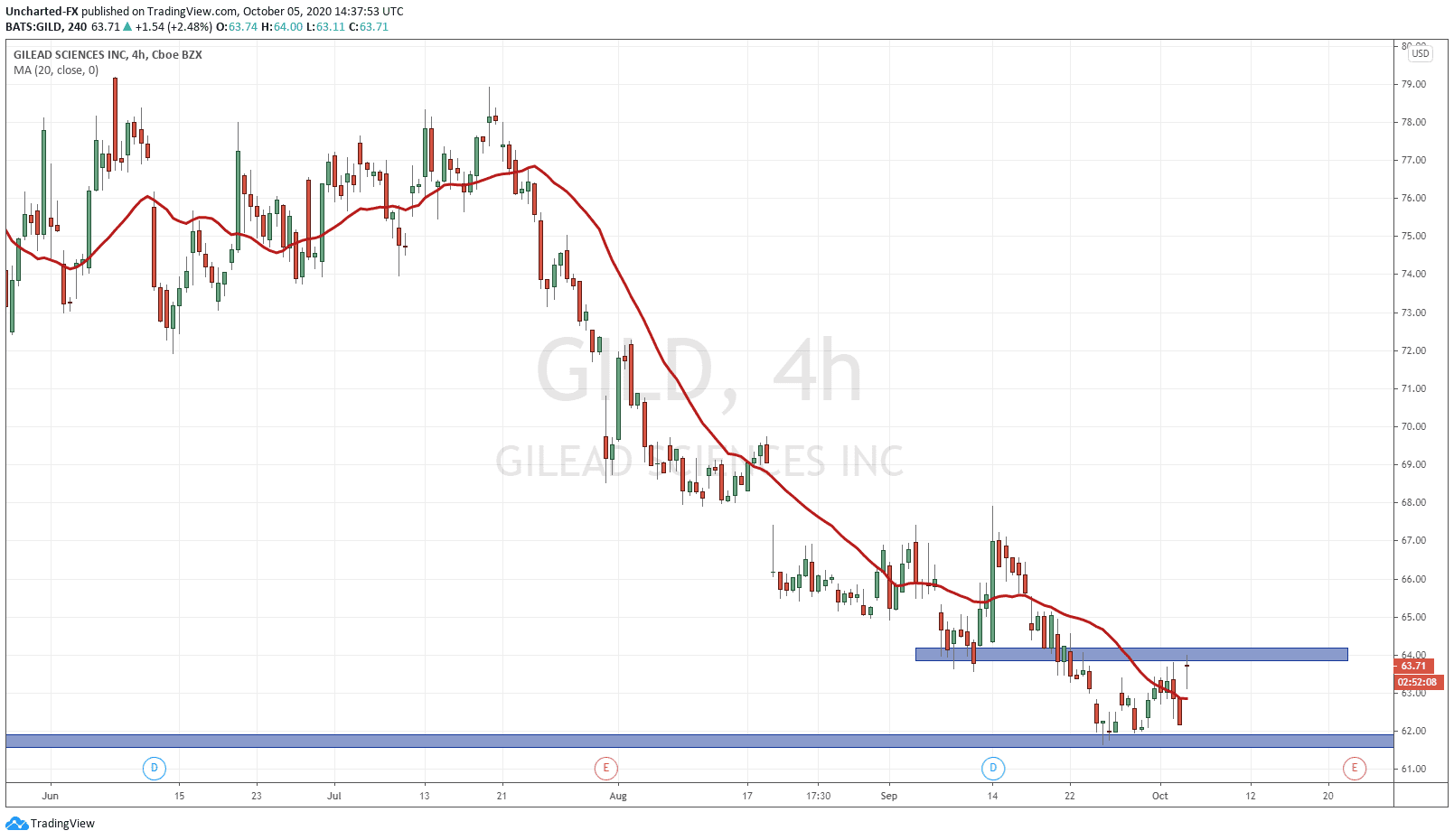 Going down to the 4 hour chart, we have signs of a bottoming on the verge of playing out. Price is constrained within the 62-64 range. A break above would be a nice buy trigger. You can see that price did indeed gap up today at the open.

In summary, I expect a large pop in the markets, but also in the biotech/pharma companies. Gilead looks the best from a chart standpoint. You can also trade Regeneron (REGN) had a big pop this morning, but the chart doesn’t look as nice as Gilead’s. Also, another safer way to play the overall sector move would be by playing the XPH or PPH ETFs. Interestingly, the XPH ETF looks similar to that of Gilead, while PPH looks similar to Regeneron.