Coca Cola (KO) Leading the Dow, and the Case for Value Stocks 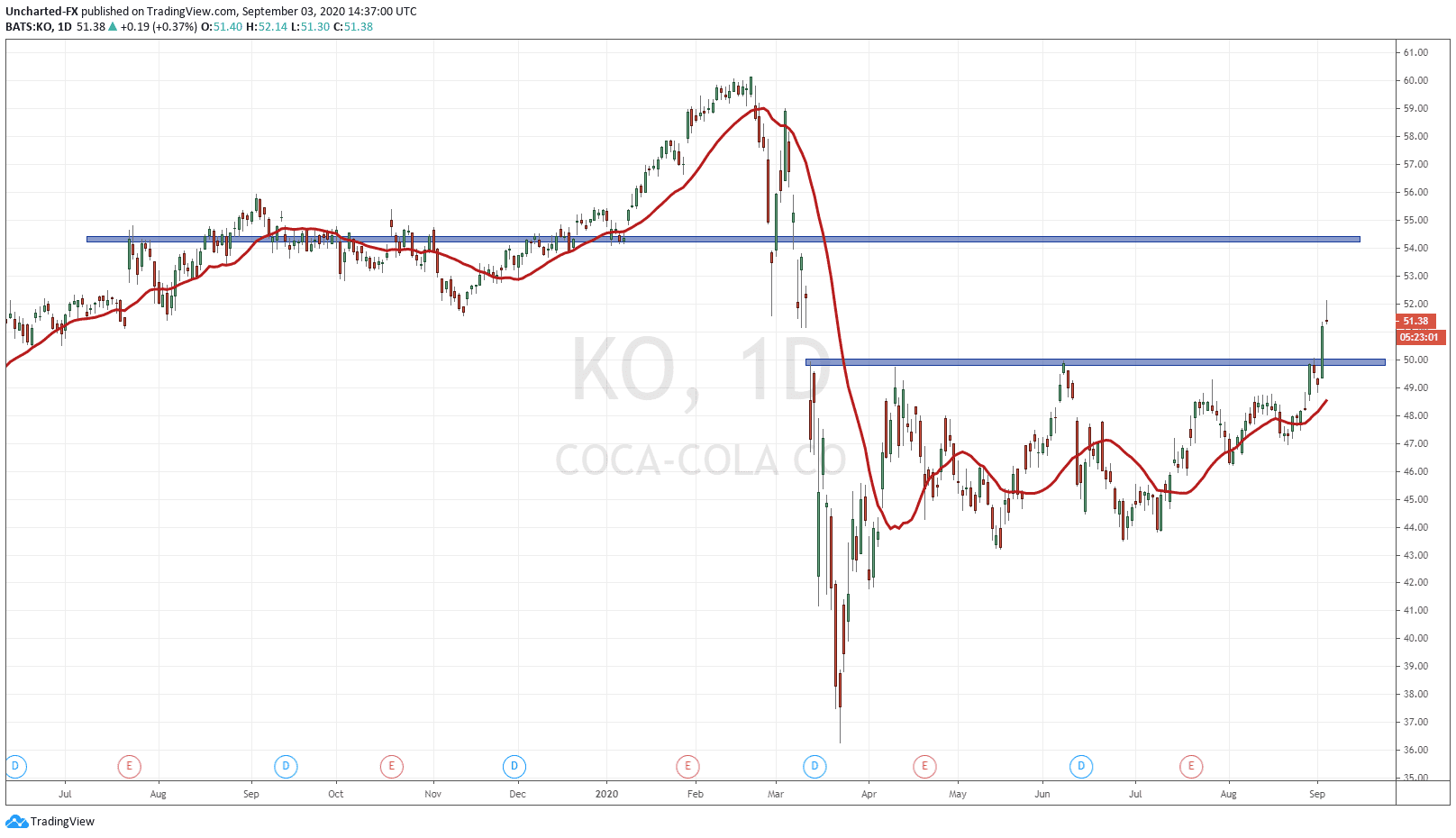 Coca Cola (KO) has been a darling in our Discord Trading Room. We have been watching it since May of this year, patiently awaiting the breakout of consolidation. Patience paid off, and the breakout occurred yesterday. A very powerful one as well, just look at the candle body and how it closed close to the highs. Very bullish!

Technically, going forward, we remain positive on Coca Cola as long as it remains above 50 dollars, which was the breakout zone and an important psychological number for the stock. It is possible we do pullback and retest this zone before moving higher. My readers know that this is normal price action, and what we prefer. The next major resistance target would be the 54.20 zone and finally, 60.00.

On our Discord Channel, I have made the case for a move into value stocks. A quick summary on value vs growth stocks: Growth is largely the tech/Nasdaq stocks. Stocks that investors believe will grow and expand and eventually be making enough profits to pay out a dividend. Value are stocks that have a good business which pay dividends and are trading lower than they should be (cheap relative to a measure). Warren Buffett is the most famous advocate of value investing.

With the Nasdaq popping and seeing irrational exuberance, I have made the case that other “lagging” indices like the Dow Jones and the Russell 2000 will catch up and also breakout into all time new highs following the S&P and the Nasdaq. But there is another reason for this.

The Dow is composed primarily of value stocks. My reason for value stocks has been to do with the bond market. There will be a time when it will not make sense to hold bonds for yield, but rather for capital appreciation betting on lower rates into the negative. People like Ray Dalio argue this is already the case, as the real return for bonds is already negative, factoring in inflation and taxation. Bonds remain positive nominally.

What does this mean in layman terms? Those stocks which provide a stable dividend will be the new bonds. Well, they will provide more yield than bonds. The only difference would be that stocks remain a risk on asset, so value stocks will still sell off during fear. As mentioned in many of my Gold posts, this is where Gold can be seen as the new bond, since it can move more than 3% a month, and has a risk off element that sees money run into it for safety.

So going forward, I do expect some more money running into value stocks, which will aid in driving the Dow Jones into new highs. This will come especially from the fixed income funds and pension funds who have had to take more risk to meet their 8% return per year as they cannot get that from bonds anymore. Coca Cola is my favourite, as it does a lot of sales in emerging markets as well, and can see some other interesting products down the line. Visa is also another value stock which has already broken out into new highs.