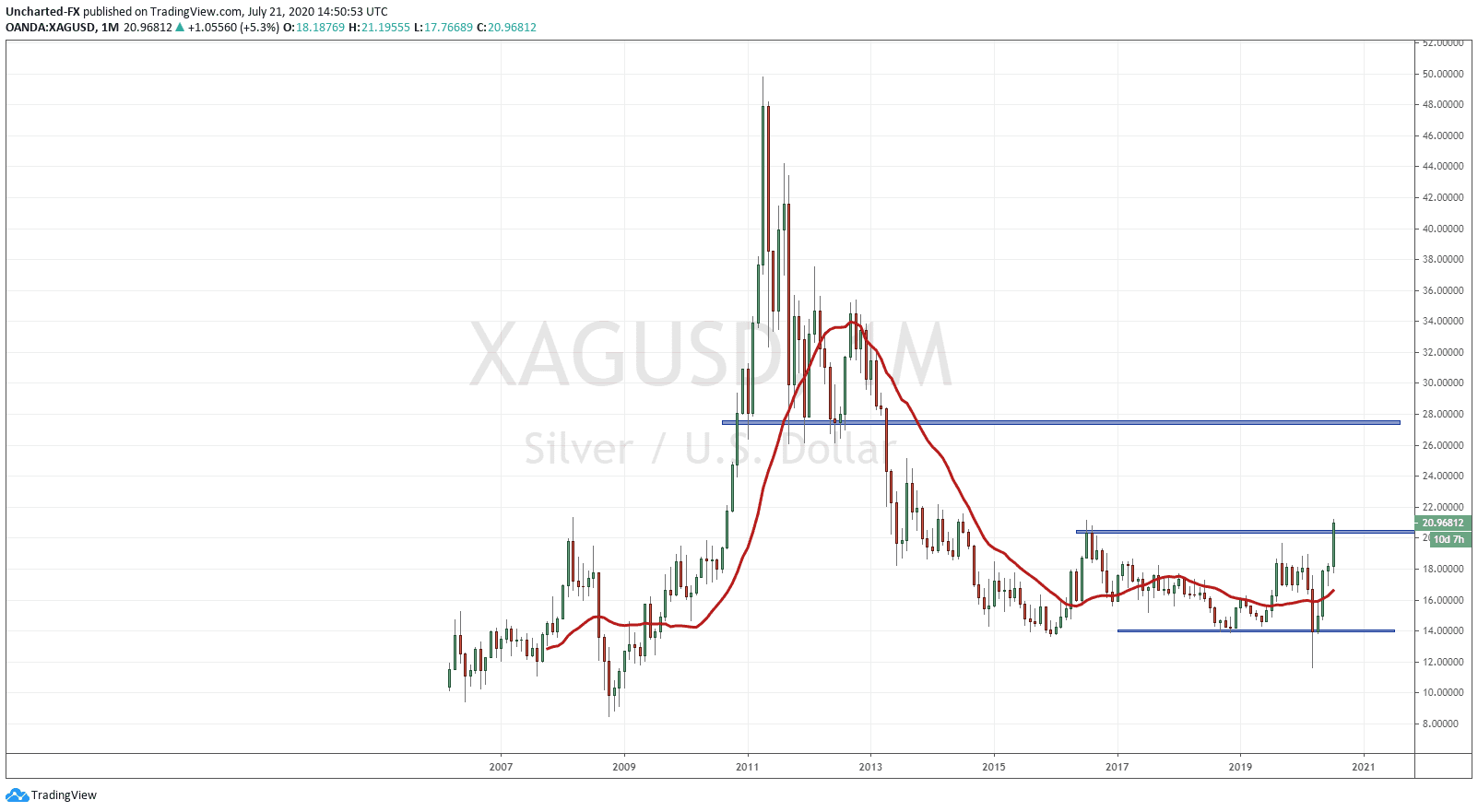 Our readers know that we love Silver. We have been bullish on Gold given the confidence crisis in governments, central banks and the fiat money exacerbating, but as they say “Silver is Gold on steroids”. The white metal outperforms Gold percentage wise on moves up. Silver is the cheapest hard asset out there, and can potentially be the investment of the decade.

My personal bullish case relies on one thing: institutions. Ray Dalio has been giving his bullish case on Gold for over a year. When he speaks, funds listen. We have been seeing institutions begin to allocate more to Gold (playing the GLD ETF, the GDX ETF, and buying royalty and streaming companies). If these funds just allocate up to 5% into Gold, the price in US Dollars will surpass $2000 per ounce. This is beginning and gaining more steam as people are realizing that Dalio’s analysis on Gold being the best currency (interesting Dalio implementing some classical economics theory) and being the next safety/risk off trade overtaking bonds. We know cheap money is staying for a long time. I have spoken about stimulus not ending. We have just heard that yesterday, the European Union (EU) passed a historic 2 Trillion Dollars (1.8 Trillion Euros) Coronavirus stimulus bill.

“The European Commission will borrow the money on financial markets and distribute just under half of it — €390 billion euros ($446 billion) — as grants to the hardest hit EU states, with the rest provided as loans. Leaders also agreed a new EU budget of nearly €1.1 trillion ($1.3 trillion) for 2021-2027, creating combined spending power of about €1.8 trillion ($2 trillion).”

All this money printing is causing concerns of inflation…especially once real money velocity returns. The precious metals have historically been a hedge to this, and is why the metals have had big moves today. Silver was up 6% at one point today, while Gold broke above the range we have been watching.

So Gold is seen as that safety play but what about Silver?

On the institutional side, Silver has not really been seen as a safety or a monetary metal. There are some school board funds in the US that are heavily invested in Silver, but not much after that. Gold is more preferred. The issue with Silver is its volatile price history. Yes, Silver runs when we move up…but it is also true for the way down. The Hunt Brothers and Warren Buffett cornering the Silver market comes to mind when one thinks of volatile Silver price action. I have been reading up on Warren Buffett’s reasons to go long Silver and it was all due to industrial applications. The main thesis was a supply crunch. The Silver fundamentals that Buffett listed are more exacerbated now. The bullish case Buffett saw back then is much more appealing now. The one thing maybe preventing Buffett from going long Silver now is he might not be bullish on the real economy recovering. His venture into Natural Gas recently was his first large acquisition since 2016 and was not really on par to trades betting on the US economy coming back like General Electric and General Motors etc.

This volatility has deterred funds from taking large positions in Silver, but I think that is about to change. The debate about Silver moving like monetary metal or an industrial metal can be answered by comparing the correlation against Gold and Copper. Silver correlates more with Gold than Dr. Copper. It follows the monetary metal. 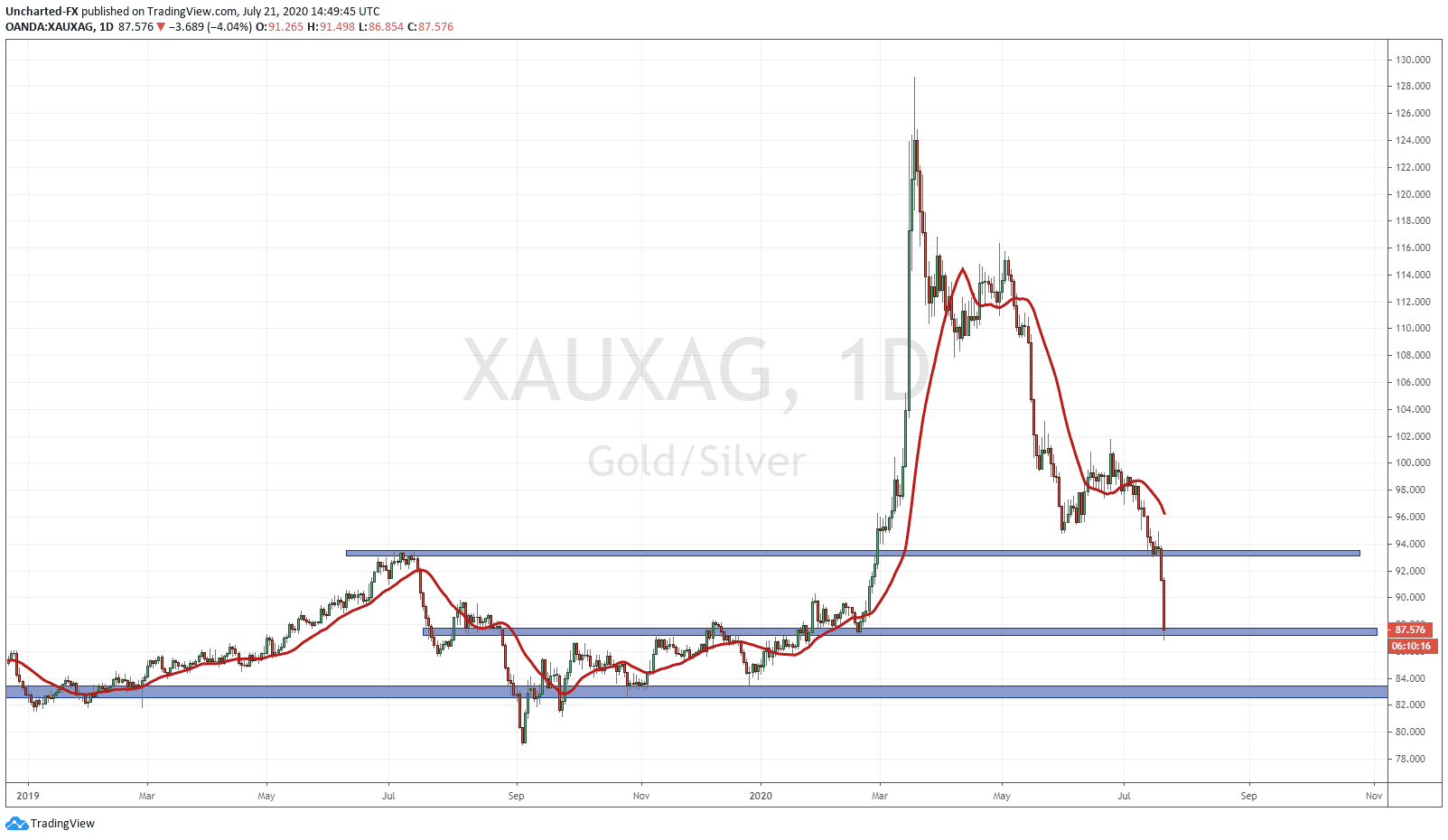 If you are a smart fund manager right now, you are probably looking at some safe/hard assets given what central banks are going to do (keep rates lower for a long time…in fact negative rates will be the norm…why hold bonds for yield?) and what governments are going to do (more deficits, more stimulus, higher taxes, social issues worsening). Gold is the first choice…but sooner or later (like even now) funds will think Silver is cheap compared to Gold. The Gold/Silver ratio is declining but it has been at record highs for some time (when Silver was money the ratio was 15/16:1). There are fundamentals with above ground Silver supply, which is also bullish for the miners. But I think the most attractive case for Silver is the size of the market and what it means for moves.

The Silver market is tiny. Gold is a 7 trillion dollar market. Silver is just 1/10th the size of that. If funds look at silver as a hard asset AND plays a monetary/safety role similar to Gold, the allocation into Silver is the driver for higher Silver prices. A larger allocation by large funds into the tiny market will cause Silver to rocket. Personally, I think a break above previous record highs at 49.81 is coming down the line. This is really about holding a hard asset due to the unprecedented actions of central banks and governments. I really do believe we are near the end of the soft money/fiat cycle (can be prolonged by eliminating cash and going digital) but that is a discussion for some other time.

In terms of the charts, Silver easily sliced through an interim resistance level at 19.60. My followers and readers know that the key resistance zone was 20.50. I am actually surprised at how quick we have broken above this zone as Silver hits price levels it has not seen since 2016. From here, the monthly chart is what interests me.

Why do I like this chart so much? It is similar to moves I have predicted in Gold, GDX, GDXJ, Pure Gold Mining, and most recently, East Asia Minerals. This basing pattern after a downtrend displays ⅔ market structure moves. The uptrend generally comes after the basing/range. Silver has been in a range on the monthly chart from 14.00-20.50. The range is breaking but the confirmation will come at the end of the month. We need to see the monthly candle CLOSE above here. Sure we can see some moves down to retest the breakout zone before then, but my fundamental case to be long metals remains the same, hence why I am bullish and have personally allocated a large percentage of my capital into the precious metals sector.

Using the charts, I would target the next resistance levels in the next few months. I see Silver hitting 27.00-28.00 next if we get a confirmed monthly candle close above 20.50 at the end of July. 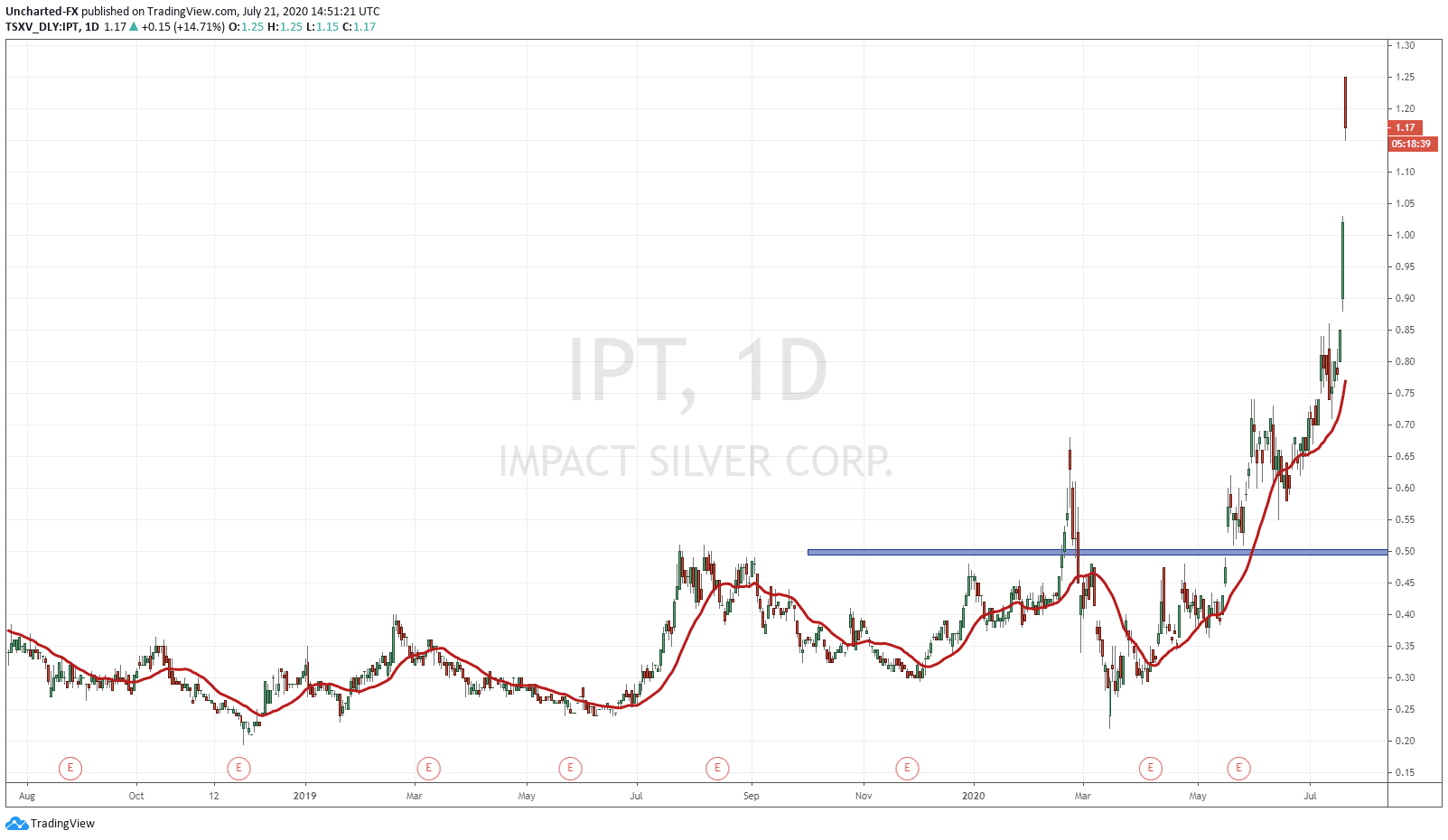 Another way to gain is by playing the Silver Miners. Impact Silver (IPT) has been one of my favourite PRIMARY Silver producers. The team at Equity Guru did a site tour back in February which can be seen here. And Impact Silver has been on Greg Nolan’s Gold and Silver Round up. You can read more about Impact’s fundamentals here.

I suggested an entry into Impact Silver with a break above 0.50 cents if you did not enter the stock when I suggested it between 0.30-0.40 cents. The stock has rallied hard with the surge in Silver. If you entered the stock the next day after the break of 0.50 cents, you would be up 109% currently.

With the Silver run just getting started, there will be more gains in the Silver miner stocks, and is a great way to bank some returns while accumulating physical bullion and trading the Silver futures/CFDs.