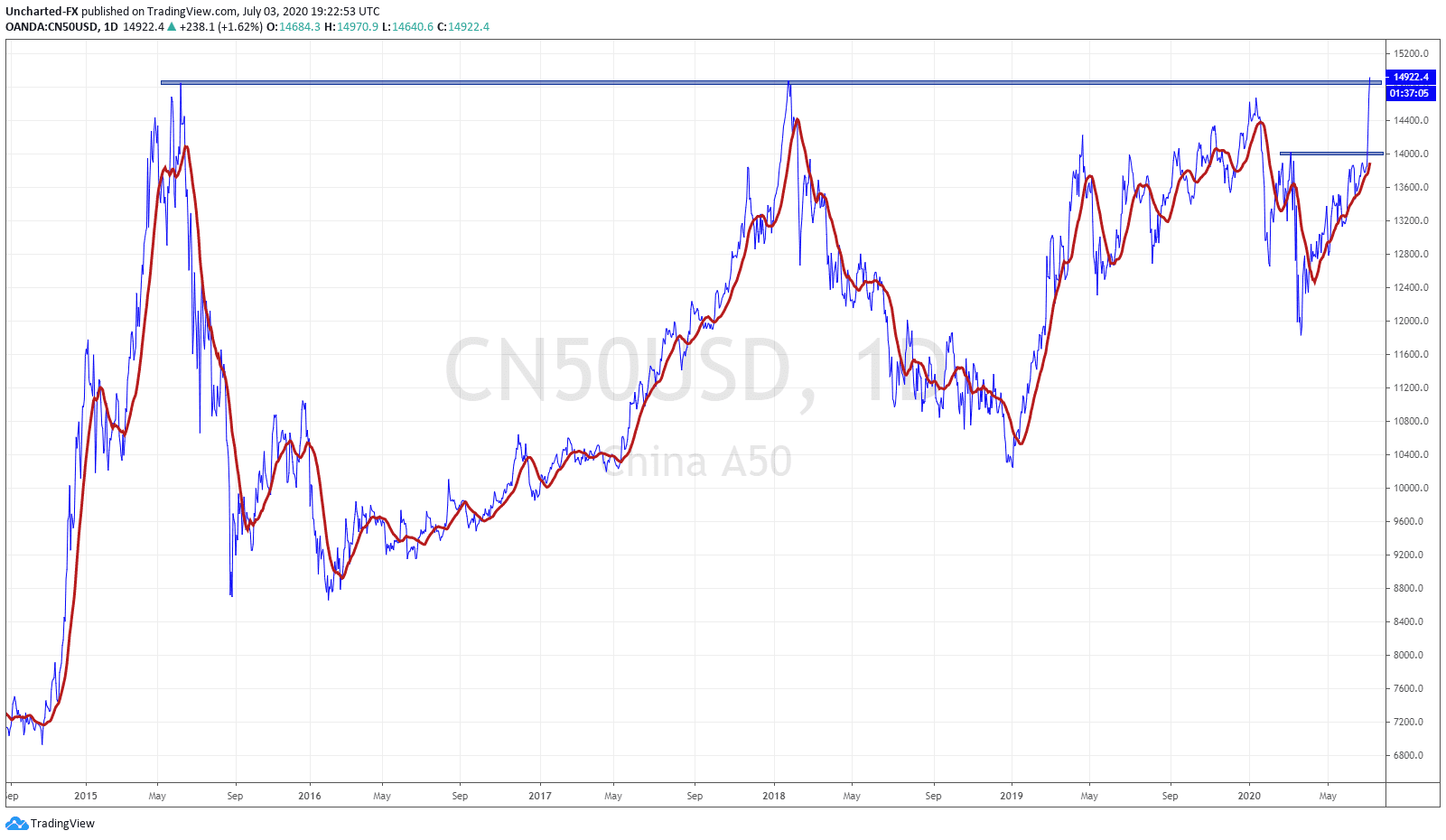 It has been a subdued market but eventful shortened week. US markets being closed today for the observation of Independence Day which falls on a Saturday. Generally, the 4th of July week is slow as a lot of liquidity is missing, and many Americans take time off. There was some interest on how markets would react this week as most Americans couldn’t travel with their time off in most cases. Talking with my American friends however, they did tell me most Americans are still taking the week off or some time off on Wall Street. The media has been talking about the Robinhood traders using their stimulus checks to day trade tech stocks. A lot of these people would be making up for the traditional institutional traders who took time off. Either way, I am a technical trader and as long as market structure held,  my view has not changed. On Mondays Market Moment post, I talked about the daily charts of US equities holding support and trendlines. These are still valid going into next week.

Most world markets have looked the same. They have risen in tandem. That is until this week. China has diverged…and I mean quite dramatically. 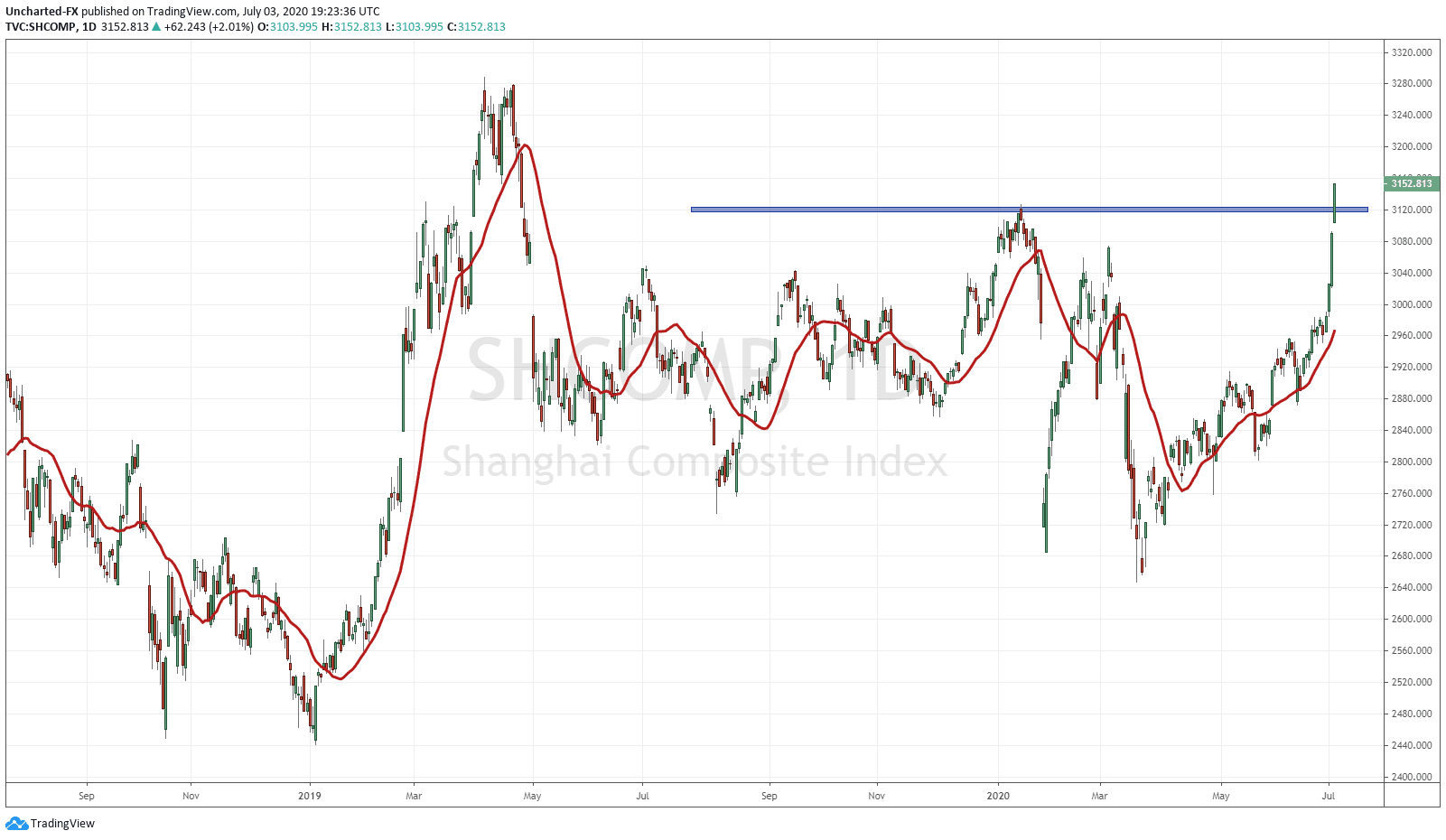 Look at those daily green candles. The China 50 is on pace to make new record all time highs, and the Shanghai Composite Index seems to be itching to test the resistance and highs of April 2019 on its way higher.

The big debate for those who believe equity markets move in tandem is who leads? In my days of day trading at a prop firm, many watched Asian markets as a way to lead. Since Asian markets open on Sunday North American time, many traders used them to predict the opening of US futures and then market opening on Mondays. If China opened green, the US would open green. There is then a core group that believes it is the opposite. That the US markets dictate what other world markets will do. Of course the emerging market guys would disagree with this, but it is hard to ignore that most world indices have moved together. This will be a debate going on forever. To be honest, I think most of the emerging market guys watch the currency markets for the opportunities to jump in Emerging Markets or be heavy the US.

So the question is, why has the Chinese markets popped? Many are trying to link it geopolitically to the National Security Law but to me, it does not make much sense. The most common answer is China is up on hopes of containing covid and the economy getting back on trap. For those that remember, China did NOT lockdown the entire country. Just certain spots. Their manufacturing continued albeit not at high numbers. The International Monetary Fund (IMF) has even said China will be the only nation that will have positive economic growth this year (at 1%).

We had a week with unexpected job data, like the US Non farm payrolls, and this continued over in Asia. Chinese PMI data for the month of June came in at  58.4 indicating China’s service sector is expanding at its fastest pace since 2010.

The PMI rose from 55 in May to 58.4 in June, its highest reading since spring 2010, the period after the global financial crisis. Any reading above 50 indicates expansion, and analysts said the strong performance by China’s service sector, which accounts for about 60% of the economy, suggested that the new outbreak of Covid-19 in Beijing had little impact on the country’s recovery.

Just like economists and experts doubted the US NFP data, we are getting the same regarding Chinese data…although data from China is occasionally met with a lot of criticism and skepticism.

The question for us traders now is whether or not other markets around the world will see China like news. In the US, we have continued the battle between fear and greed. Yesterday’s NFP job data was challenged by the highest covid case surges in the US in a single day, raising doubts on a US reopening  as fear of a second lockdown intensify. This has been in the minds of market participants, even overcoming the US data which has been indicating a recovery.

Time will tell as US markets are closed today, so cannot react to the move in Chinese markets. We will have to await until Monday. Our case for markets moving higher remains the same as long as the higher lows on the daily chart are held.