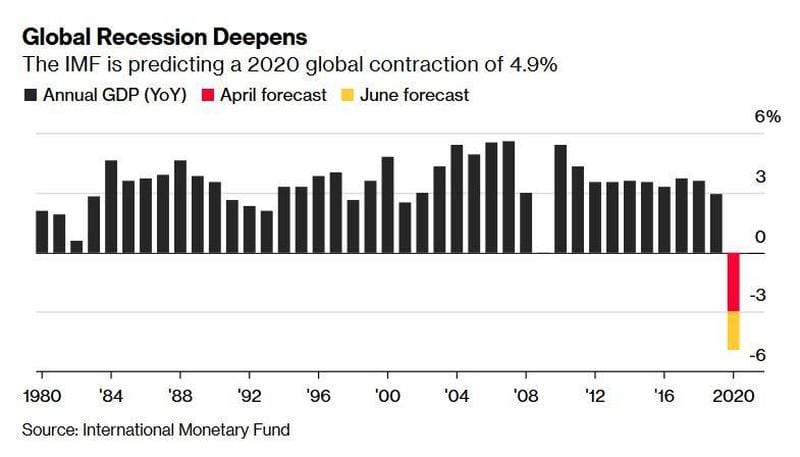 The battle between fear and greed continues on the markets. A lot more fear just been added to the mix. We first have more US China trade war news, where President Trump threatened China amidst more news on Trump administration officials wanting to ‘decouple’ the US economy from China. Not sure about you, but it seems the US China trade deal is not really “fully intact” as we were told. Tons of news has been coming out on the world recovery. We all know it will take some time and growth forecasts will be mute. Well the International Monetary Fund (IMF) came out with revised data showing that world growth will shrink -4.9% in 2020 in this “crisis like no other”. His data has been updated taking into account social distancing continuing in the second half of 2020, larger than anticipated hit to activity during lockdown with the potential of seeing supply chains disrupted, and finally a decline in productivity as businesses stopped and now have to account for meeting hygiene and safety measures.

Some growth data for particular regions:

There are two key data points here. Firstly, India has been downgraded in growth into the negatives. Secondly, China remains the only nation to have positive growth this year, albeit a measly 1%.

Here are some figures and charts released by the IMF for your leisure. 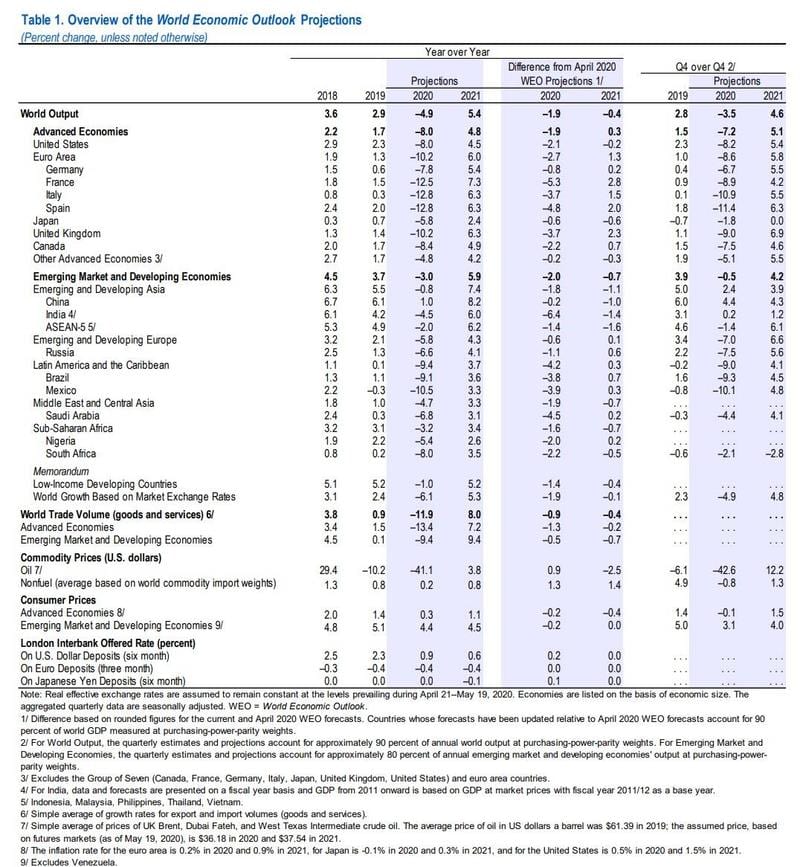 A few more things of note. The IMF commented on market activity saying “financial market sentiment appears disconnected from shifts in underlying economic prospects raising the possibility that financial conditions may tighten more than assumed in the baseline.”.

Similar to what I have been saying. There is a disconnect between the real economy and the stock market. Fundamentals do not matter as people know yield can only be obtained through the stock markets.

The IMF also warned of a potential second wave, “outbreaks could recur in places that appear to have gone past peak infection, requiring the reimposition of at least some containment measures. A more prolonged decline in activity could lead to further scarring, including from wider firm closures, as surviving firms hesitate to hire jobseekers after extended unemployment spells, and as unemployed workers leave the labor force entirely.”

With financial conditions tightening once this crisis is over perhaps in January-March 2021, the IMF warns “This could tip some economies into debt crises and slow activity further.” A lot more debt with a lot more problems. In reality, interest rates can never be normalized. We are more likely to see negative rates than rate hikes in my opinion. All to service the debt by consumers and the government. 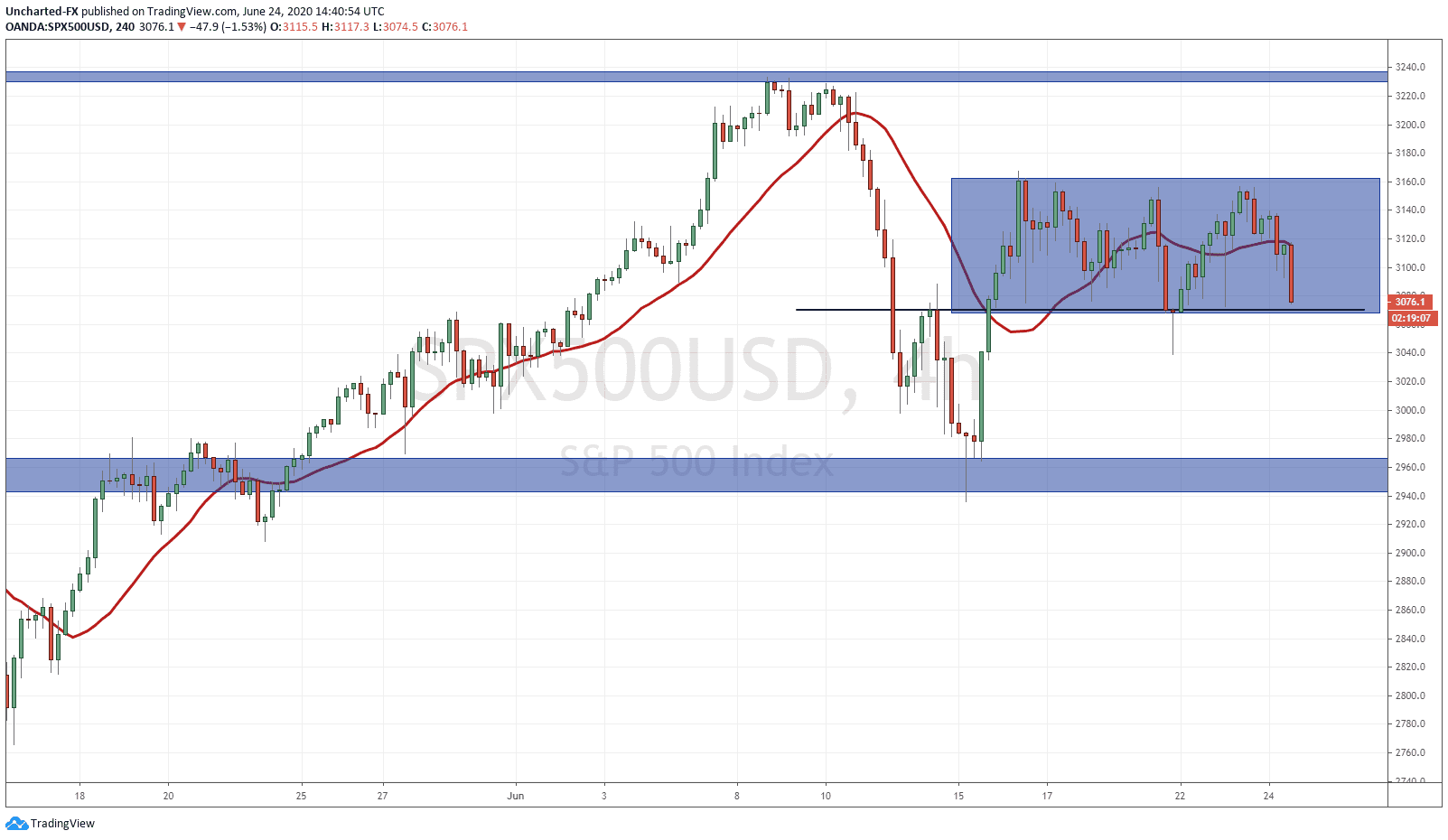 On the market front, this just adds more uncertainty and fear to an already tense market. Gold had a sell off today, but back to the breakout zone as discussed yesterday with signs of buyers stepping in here currently. We also say the Nasdaq retrace to its breakout zone. Also seeing buyers step in here currently with a large wick on the charts looking at the 4 hour chart.

The S&P and other markets still remain in the range, and I am on the sidelines until one side breaks here. You all know I look at the 10 year yield for tracking money flows. It is still ranging and not giving us a sense of direction. Just adds to the uncertainty. The US Dollar has had a bid bouncing from intraday support and the Yen sold off when it hit major resistance. How these currencies close could give us some insight into whether investors are on risk off mode.

It is just one of those weeks. Be patient and await for the break. A lot of people have been losing money chasing either side as the signals have been flip flipping just like the China trade deal news lately. 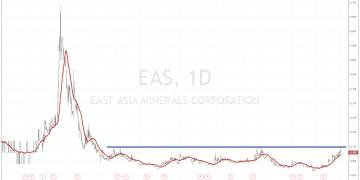