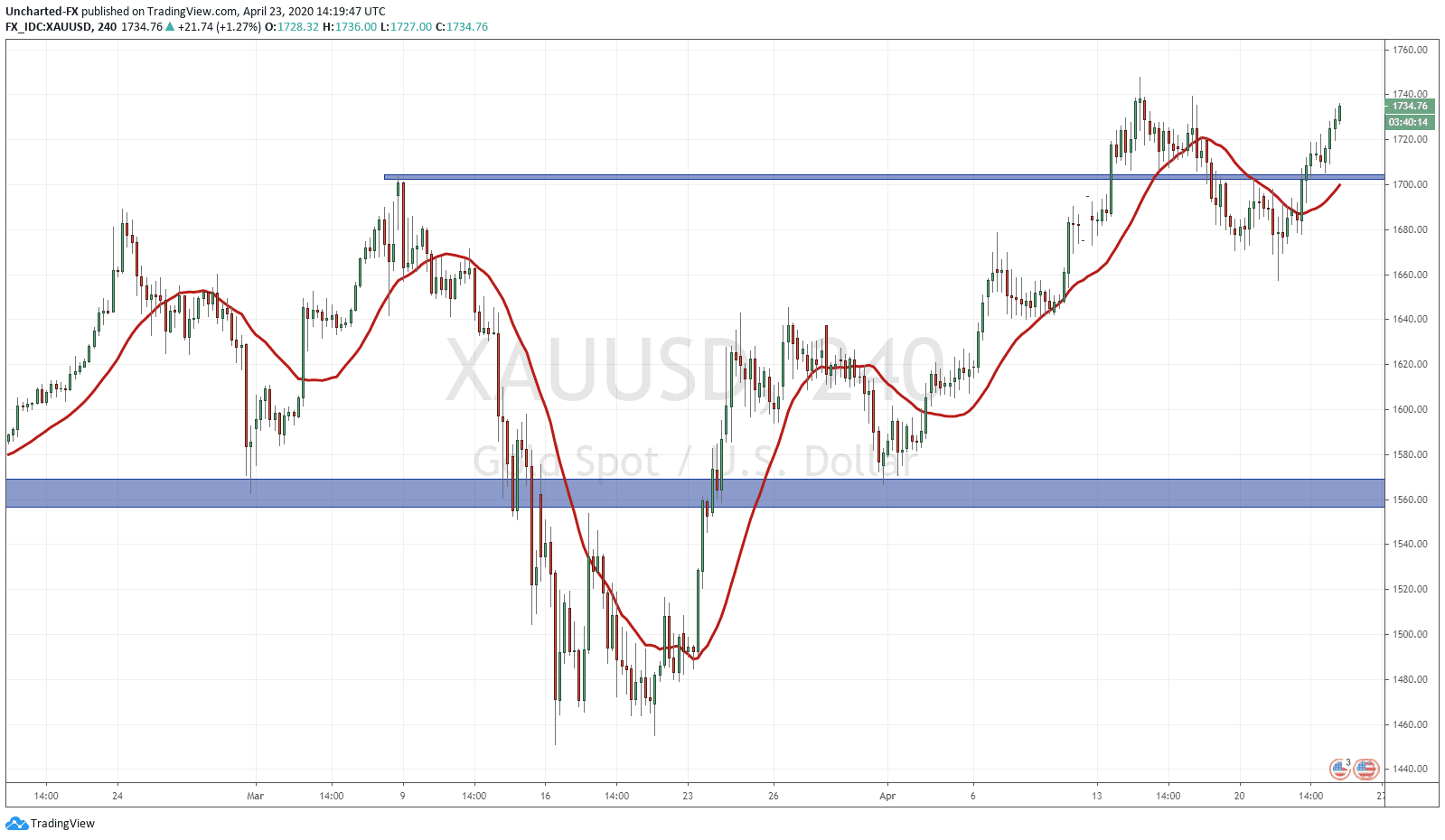 Seems like good news is good news for the markets, and bad news is good news for the markets as well, as US jobless claims come to 4.4 million meaning that 26 million Americans have lost their jobs to the Coronavirus. Markets have been green whenever job loss data comes in. Not sure if it is from the fact that this means more stimulus and easing measures and the realization that this means there is nowhere to go for yield, or if it is just the Fed propping things up. On another note, this is why I personally await for a confirmed close of the candle before entering the trade. Yesterday, I spoke about a potential head and shoulders pattern on the US equity charts (mainly the S&P). Yes, we could still roll over from here and create the right shoulder in the pattern, but until that happens, I would not be shorting here. We may very well break and close above the daily resistance zone that I spoke about at the beginning of the week.

This week has seen a new paradigm with Oil hitting negative prices on the futures. This is in a world with tons of money printing, bailouts and tons of people relying on government money to survive. Gold is now beginning to see the limelight. Gold is a confidence crisis metal. It goes up when people begin losing confidence in governments, central banks and the fiat currency system (inflation hedge). Gold is first and foremost a currency to those like me who follow the classical economics worldview. Ray Dalio and Paul Tudor Jones are a few billionaires who have touted Gold. Dalio essentially says it will be the new bonds in the asset allocation portfolio model. Short term bonds are yielding so low, that it would not make sense holding them for one month or three months for such low yields. It makes more sense to be in Gold which is for protection and where you have a chance to make more yield in Gold. Not to mention that it is perhaps the best currency to be in as central banks cut interest rates and devalue their currencies in order to keep things propped. It is a race to the bottom.

We were looking at Gold on the 4 hour for a near term short trade. We were watching the 1700 zone as support once we saw a topping pattern with multiple higher lows and higher highs. Just normal market structure for the markets to sell off. However, once we got the break, we failed to close lower to create a lower high in the downtrend. After 2-3 days of price action retesting 1700 but failing to move substantially lower… it was a sign. Now we have closed above this resistance zone nullifying the breakdown. It seems likely that we will have another break out here of the 1740-50 zone. A breakout is on the cards. On a quick note, I have always been big on Gold for the long term. I believe it is prudent to be holding physical Gold and Silver bullion, and I do believe once Gold breaks above 1900, we will have a mining mania similar to that of the crypto mania.

Bank of America gave the Gold bugs some joy with their call of Gold breaking above all time highs of Gold/USD of 1900 and having a target between 2000-3000 per ounce. Once again, a lot of the fundamental reasons I mentioned above are present. Bank of America titled the report “The Fed can’t print Gold”. That in itself is a reason to hold physical Gold. Bank of America also stated “as central banks & governments double their balance sheets & fiscal deficits were up our 18m gold target from $2000 to $3000/oz.” I really recommend reading some inserts from the post which can be read here.