It’s never been clearer that many Canadian cannabis companies were built, from the outset, poorly. As the economy creaks and groans and every sector takes a hit from COVID-19 effects, cannabis should be an exception to the rule because, if my circle is any indication, a lot of folks are at home, bored, and getting high as hell.

But weed is hurting as much as anyone else, mostly because it doesn’tmatter how much weed folks buy at home, the growers run the spectrum from ‘hard to make a profit’ right down to ‘couldn’t make a profit if they were selling toilet paper to Costco.’

A month back I wrote a story about James E. Wagner Cultivation (JWCA.C), a cannabis company that was by all accounts fine at growing consumable weed (which makes their facility at least worth something) but terrible at growing revenues and diabolically hopeless at controlling its debt. They’d just announced, a few minutes before New Years Eve, in the window of time usually held for catastrophic admissions of company failure, that they’d taken out a loan with more interest than a Kylie Jenner nude spread.

JVCA took out a debenture financing of $2 million at an interest rate of 25% annually. That’s just the first tranche of the deal; there’s another $8 million out there if they want it. My credit card, abused as it has been, costs me less interest to maintain than JWCA’s loan. Money Mart in Canada will give you a payday loan at 29.6%, if you’ve been good (though they’ll charge you as much as 46.9% if your credit score runs at MedMen (MMEN.C) levels of disaster), and while that’s just a horrible abuse of the needy, at least they don’t also want warrants from you, which JWCA agreed to happily dish out on top of their interest.

It wasn’t the first desperation loan JWCA took out. And it wouldn’t be the last.

James E. Wagner Cultivation Corp. and its subsidiaries have obtained an initial order from the Ontario Superior Court of Justice (Commercial List) for protection under the Companies’ Creditors Arrangement Act in order to restructure their business and financial affairs.

A few days ago, JWCA filed for creditor protection, just a month after Nate and Krysta Woodworth, the folks running JWCA, sold a bunch of their personal stock. The Woodworth’s didn’t tell anyone about a month later – the day before they requested for their CCA. 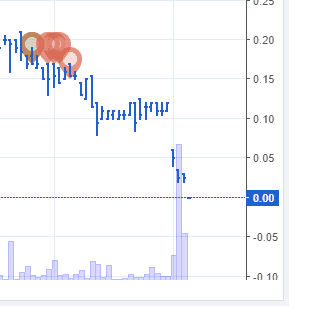 Wow, those company executives sure were lucky they sold right before they claimed bankruptcy protection, huh?

Execs selling stock on the quiet just before calling for creditor protection is the sort of thing you’d expect regulators to drop the hammer on, because it’s skeezy stuff. Investors looking over JWCA in the mnth of March might have thought the company was digging its way out of debt, that maybe they were working hard to make sales, that the worst may have been in the past but no.. they were quietly prepping to hand over the keys, and selling their stock while doing so.

There ought to be a law.

Sometimes execs screw up their paperwork because they’re new and inept. But the timing here is indicative of less ineptitude, and more general shittiness.

As announced earlier today, James E. Wagner and Trichome Financial Corp. have agreed to a consensual restructuring pursuant to which (i) Trichome will provide interim financing over the term of the restructuring of up to $4-million under a debtor-in-possession loan; and (ii) Trichome has agreed to purchase the assets of James E. Wagner, pursuant to an asset purchase agreement that contemplates that Trichome will be the stalking horse in a sales and investor solicitation process.

JWCA were in a total mess when Trichome dangled a fishing line over the side of their boat last year. JWCA took their bait happily, putting TFC first in line to take over JWCA’s assets in the event of a payment default. To Trichome’s credit, they didn’t pull an MMCap and drive JWCA into the dirt to ensure they’d be left with everything with investors getting wiped out, they just offered a decent rescue rate with some nice sweeteners and waited for the inevitable collapse.

It took a while for JWCA management to find their way to the cliff’s edge, as they took progressively worse and worse financing deals that made it imossible for thecompany to ever get back above water, but at least kept their own jobs intact for a while longer. In doing so they made certain there’d be nothing left for retail investors at the end. After two financiers and Canopy Rivers (RIV.T) (which has a hefty royalty on everything JWCA sells) have gone through the assets, shareholders will be left divvying up pennies in the couch and recycling fees on water bottles left in the break room.

TFC, it must be said, kept this collapse from happening half a yearago. Even now, they’ve placed a ‘stalking horse’ bid for JWCA’s assets, which ensures they won’t be sold for a stinkbid and tells creditors they’ll need to offer a decent price to beat the creditors.

TFC really are in the catbird seat here. If someone comes along with a high bid and actually takes the JWCA assets for near what they cost to build, TFC gets its money back with interest and loses nothing. If an ‘only decent’ bid comes in, TFC can match it if it chooses. And if no bid comes in, TFC takes over the assets for bottom dollar.

Trichome’s business model can be described best as, “You’re sure you want to do this? Alright then, but only if you’re sure…” They don’t massacre their borrowers; they do expect to be paid back honestly, as opposed to destroying the company on a short attack, converting their debts into penny shares, and rifling through desk drawers in a garage sale for whatever’s left.

But if they HAVE to take over a company’s assets, then okay, they will.

JWCA has borrowed more money from Trichome to keep the facility alive while they figure out how dead they are, and will continue to manage the facility during that process, at Trichome’s expense.

But, let’s be clear, Trichome is taking that facility. The Woodworth’s have managed to mismanage their business to the point where investors will get screwed, TFC will take over, and the Woodworth’s will simply become employees going forward.

So hey, at least they’ll be okay.

Trichome popped 50% on the news, which means someone cashed in grandma’s allowance cheque and bought 100 shares.

FULL DISCLOSURE: No dog in this fight. The author keeps threatening to buy TFC stock but is waiting for a liquid market.