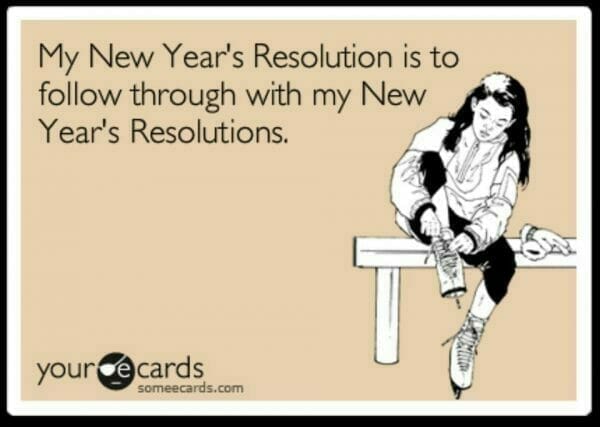 Christmas is one of those holidays where all reason and common sense go out the window. We reconcile with toxic relatives in the spirit of the holidays, we buy expensive gifts for other people, and generally engage in prosocial behaviour out of a weird social admixture of guilt and goodwill. Most of the rules of common sense tend to be suspended for the holidays.

At first glance, a brand new bike package from Peloton probably seems like a wonderful Christmas gift. You stick it under the tree on Christmas Eve wrapped in a bow, and your lucky wife or daughter or husband gets up in the morning, spots it and showers you with thanks. Or something. Naturally, it doesn’t feel right to start a life-changing New Years resolution before the ball drops and the champagne is gone, so the bike sits unused until the first.

Next come the usual declarations about daily use and dieting, and maybe they do use it for a good solid four days. They sign up for the online classes and get pumped for awhile, and then life reasserts itself two weeks later and the workouts go from everyday to every second day, and then twice a week and everyday on the weekend. Then only on the weekends, because seriously what were you thinking? Who has the time? The time drops to once or twice a month.

Eventually, the guilt sets in because you made a promise to yourself to do better, think better, be better in the New Year, and by March, you’ve already abandoned all of that optimism. Reality has set in. Now the $3,000 bike that’s jacking you every month for $75 for the next six years of your life collects dust in the corner, covered in a white sheet while you deceive yourself into thinking you’ll get back to it eventually. But you know the truth.

That’s the main problem with Peloton. It’s essentially a gym membership masquerading as a tech company. The notion is that the company will break even with the bikes, and expand their revenue into profit through the supplementary material they sell to subscribers. But they won’t. Peloton’s IPO valuation was $10 billion, but the company will need to make considerable advances in market penetration for investors to avoid a loss. Something to the range of 40% of U.S. households with a gym membership would require a Peloton to justify that valuation. At present, their market penetration is maybe 3%.

What’s the difference between these two bikes? 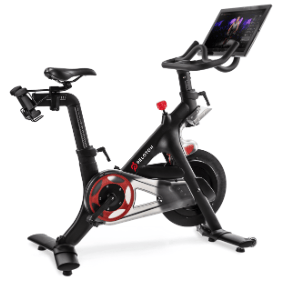 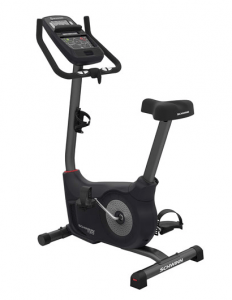 The first will run you $3,000 and the second $350 new, and maybe $35 if you get it secondhand at Value Village. If you’re like most people then you won’t feel the sting of losing $35 when you either hand it down to someone else who won’t use it, or discover it among the clutter in the garage when you move next.

Peloton’s supplementary material is an online program that will run you approximately the cost of the secondhand bike where you can get inspirational videos and community. But you can get those things for free on YouTube, and if you’d prefer to avoid the ads, you can always shell out a couple bucks a month and get them turned off.

The company found itself in hot water before Christmas over an ad wherein a husband buys his wife one of these overpriced monstrosities, and some critics pointed out the inherent sexism of the ad. Then there’s the body positively issues wherein they cast an actress who’s already thin and fit to portray her transformation in a year’s time. I had to shelve this story for a few days while I asked around about why women found this ad so offensive.  My wife was no help—the only thing she would have found offensive had she found it under the tree would be the price tag—but finally, I found the answer. It’s the implication that a husband would provide this gift without prompting for his wife, which is a backhanded way of telling her she’s fat and needs to work out.

Either way, it did cause something of a stir in their stock over the holidays, but that’s basically over. 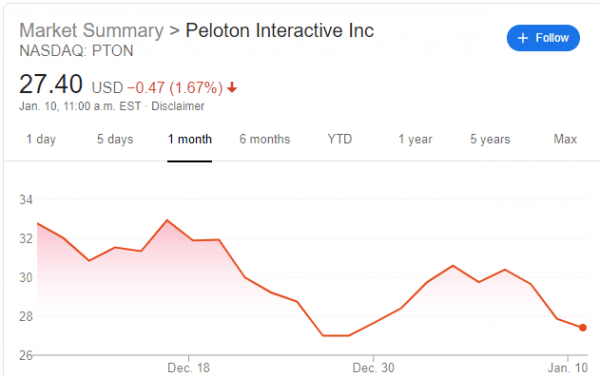 The return to form is likely a result of the commercial and its increased visibility as well, as after the outrage wears off people tend to sneak out of their holes and go have a closer look at what all the fuss was about. Hence, outrage causes higher visibility, which translates into sales. The second cliche of the day turns out to be true: there’s no such thing as bad publicity. Whether or not this is an intentional use of outrage-media to raise brand visibility is still up for debate.

The chart above suggests that the hype is over, though. We’ve put the Christmas decorations away for the year, and remembered why we weren’t talking to Uncle Jim. The endorphin highs from the first two solid weeks of our New Years resolutions are over and we’ve gone back to work. Reality has started to assert itself again and everything about that holiday delusion has been thrown out, like last year’s regifted fruitcake.

Peloton (PTON) Clapped! Down 14% and Sheds $4 Billion in One Day