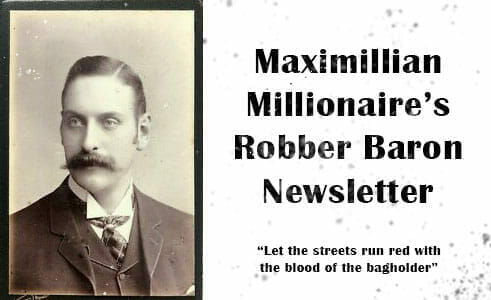 The penny stock game is often derided by men of letters as being a wild west scenario, a ‘cruel and shallow money trench, a long plastic hallway where thieves and pimps run free, and good men die like dogs.’ Reportedly, there’s also a negative side.

Though Canadian microcap companies are oft-derided for being pump and dumps and scams, they are, at the least, audited by accountants.

In the US, the levels a company can move down if they’re broke or bereft or have unaudited financials or CEOs escaped to tax havens, are many.

If you’re on the pink sheets, many brokers won’t deal in your stock. You’ll often find skulls and crossbones listed next to a company’s name on the pinks, warning folks you might not want to place your money in their care.

Beneath the pinks are the greys, where your neighbor’s horse shed may be listed as an aerospace company, or the brothel up top of Crazy Edward’s Tavern may find a path to a public listing.

If one were to take advice from the tweets seen on the #fintwit area of the social media monstrosity known as Twitter, once might feel compelled to place a small wager on a company called Access-Power Inc (ACCR.OTC) which had, until a few days ago, lived on the greys for 18 years.

Word was, it was being uunshackled.

Keep your eyes on $ACCR tomorrow. Day 2 off of grey market and with volume, could easily see .05! Low share structure!

$ACCR Technical Squeeze! It’s gonna happen. The float is more locked today than it was on Friday after people who don’t understand sold. You’re gonna be sorry about that soon. lol

Heavens to Murgatroyd, best get a piece of that action!

As I had my manservant, Schenectady, check the tickertape and prepare the stagecoach for a trip to Boca Raton with a chest of bullion to acquire stock certificates representing this entity post haste, one of the helpful online tweet-merchants pointed me to ACCR’s just posted 8K form, packed full of background information one should know before diving in.

It was, at once, an astoundingly honest document, while perhaps also a cry for an urgent constitutional in the nearest sanitarium.

The entire form to file with the Florida Sec of State was mailed and on 10/18/2019. This is a non-dilutive purchase.

No kidding it was non-dilutive. A whole dollar! Surprised nobody had to take out a debenture to knock out that sizzling deal. I’m writing to you from the year 1933 and even in my time, a one dollar purchase is cheap.

How did this deal come about? Well, the CEO needed a company to process credit card payments, so he found one… somewhere… for a dollar:

I am for tax purposes dissolving Hunter Venter, and will continue with Grand Haven MM to process payments Visa and Mastercard for our products based website: http://www.mycbdpets.com

That’s a real site, that apparently sells products with the aid of marketing phrases that rely on smile geometry to compel you to buy.

Turn it upside down now! Hypotenuse that smile or the puppy gets it!

This sort of thing has worked before: 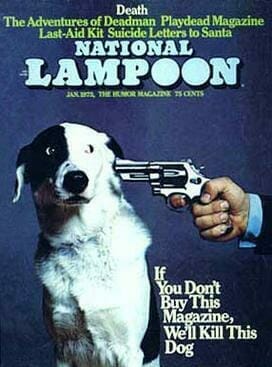 But the CEO of ACCR wasn’t finished yet. In fact, the most compelling sales message I’ve ever set eyes on would follow.

This is a real product, and I am a reseller or a private label account contract. I signed and sealed with 3 of the Nation’s top Pet CBD, including Diamond CBD.

For now, I plan to market the sale of these products just talking to people on the street. I am a skilled salesman. The margins in these businesses run in upwards of 400% in our business model.

So much to unpack here, madames and monsieurs.

First, he’s done deals with the “Nation’s top Pet CBD” – if you can’t respect that sort of dedication to the sales craft, I don’t know what you expect out of the guy.

Second, he plans to sell the products IN THE STREET. Nobody is doing this anymore, presumably because you’d be arrested for vagrancy in most cities across the country and because it isn’t 1922.

But that’s just the sort of novel business plan that works these days! The hipsters will love it!

I’m not sure how he’s going to criss-cross the nation selling pet CBD in the street when he’s disabled and working from home. Perhaps he’ll live the hobo’s life and ride the rails from Ogdenville to North Haverbrook, but HOW DARE YOU DOUBT THIS BARON OF INDUSTRY!

Clearly the powers that be have some belief in this CEO’s promise, as the OTC markets have decided to reward Access-Power, at no prompting from the company at all, with elevation off the grey sheets, where the company has sat since 2001.

We did it!!! On October 18, 2019, Access-Power, Inc., for the first time in Eighteen years (18), is back on the Pink Sheet No Information tier again. This represents a feat only accomplished by a handful of Companies.

For almost two decades this company has traded by appointment.

Or, more likely, by accident.

But now it’s on the pinks, just a few short levels away from being a real grown up boy, and this CEO is going to capitalize, by gum!

A true gift to my Shareholders. I am not 100% responsible for this action. The market in 2019 is changing, and as mentioned, there were only about 10 or so companies out of thousands, that were upgraded in tear [sic], and out of all of them, we made it! If we see a Bid today at 0930 EST, then I believe that in the future we will continue to trade with visibility and quotes.

Oh, he saw a bid alright. He saw thousands of them, driving his stock price way up from where it had been for the last two decades, and then down 40% the next day as, presumably, he took advantage and sold some stock.

I mean, assuming he could find the stock certs. 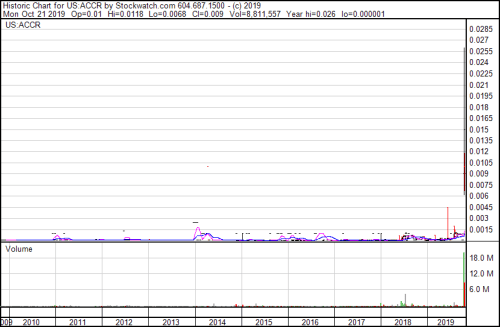 Little hard to make out the detail, so here’s the close up. 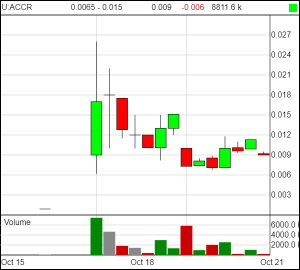 So what’s the plan for Access-Power, besides selling CBD pet treats in the street?

The CEO has ideas, lads. They may not be recognized as ideas by others who reside outside his apartment, or his head, but he has ideas and he wants you to see them.

For entertainment purposes, you can also visit my favorite place where I post my ideas, and that is: https://investorshub.advfn.com/Access-Power-Inc-ACCR-23

Okay. When you visit that page, what you see is: 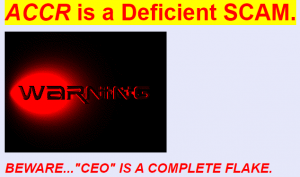 This sort of outsider marketing is a sight to behold. He’s actually sending people to a site that says he’s nuts, and he agrees with that assessment, and it’s working for him.

ACCR SHAREHOLDERS, I HAVE GOOD NEWS!!!!!!! I have a new PRINCE of the United Arab Emirates as my friend on LINKEDIN!!!!!!! A PRINCE! Unless someone can see his/her name which I am pretty sure no one can.

“…GOD HAS SPOKEN TO ME Please, no judgement. I am crazy. I am very CRAZY!”

So how much capital does this rocket from the beyond currently hold in hand?

There will be no issuance of shares in 2019 and 2020.  As Director of ACCR, it is my fiduciary duty to report to my nearly six hundred (600) shareholders.  As I have no money at the moment and ACCR only has $1.48 in it’s Premier Checking Account, I am unable to at the MOMENT pay for audited financials.

At market close three days ago, this was a $0.000001 per share company worth all of $200, as it had been for 18 years prior, during which time nobody gave it a moment’s thought.

Then the OTC raised it from the dead, for reasons nobody truly understands, and then the twitter scallywags started promoting it as a trade. It reopened at $0.015 a day later, making it now a $3.5 million company.

Yes, ladies and gentlemen, perhaps you and I are smarter, less noodled in the noggin, more likely to present ourselves at the country club and be warmly welcomed by the President as men of import. Mayhaps we don’t see demons and gods when we close our eyes at night, and perhaps less folk mock us roundly on media of the social sort.

But Patrick Jensen, self-confessed crazy person, disabled American, CEO, and majority shareholder of Access-Power, currently sits on a net worth of $1.18 million.

You wish you were Patrick Jensen.