One of the big lessons both a public company CEO and a public company investor have to learn and remember always is, sometimes the market will take you out back and shoot you in the head and it’s not actually your fault, the gods determined that it just had to be done.

Long time investors were perplexed. But the explanation is pretty simple. 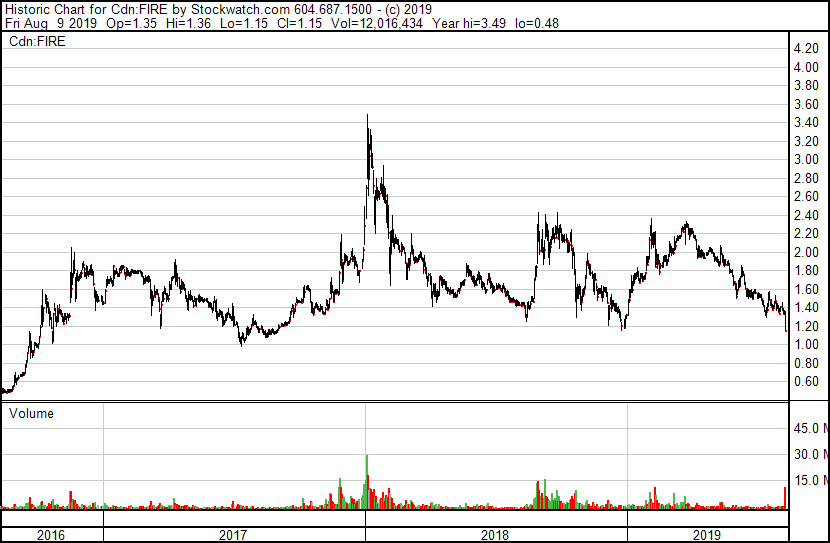 At $1.15, that values Supreme at just C$363 million, or 5% of the market cap of the $5.9 billion Cronos (CRON.T), which has similar levels of both sales and losses to its smaller rival with an out-sized valuation advantage.

Here’s the one-day chart. You’ll note the damage was done in the last hour. 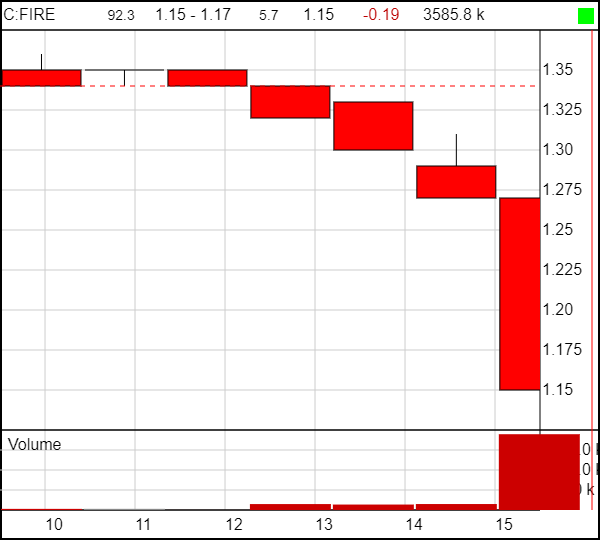 Why did this happen to Supreme specifically?

Dumb luck, to be honest.

I hate ETFs. They’re a stupid way to invest for people who want to put a chip on every number on the roulette table instead of picking red or black. If I’m buying Organigram (OGI.T), I don’t want to have to put money into Abattis (ATT.C) just because they’re in the same sector. If I like Origin House (OH.C), why do I also need to shoot hundys at Emerald Health (EMH.V)?

Because robots, that’s why. The big financial houses are killing off real analysts and traders and replacing them with ‘robo-advisors’ who buy up shares based on algorithms and not understanding of reality.

Some ETFs are based purely on market cap. If a bad company convinces enough people to buy it, the ETF will buy even more. If a good company drops in value because of a short term issue easily fixed, the ETF sells it off.

The ETFMG Alternative Harvest Fund (MJ.NYSE), which holds over a billion US$ in cannabis stocks, mostly in Canada, performed its quarterly rebalance in the last hour of trading today and, while Supreme wasn’t having the greatest day before that, having been under some downward pressure for the last month, the ETF bailout caused carnage far beyond what anyone would honestly suggest was deserved.

[contextly_sidebar id=”2pdWZ208maORBEAbvPgPt3ZtDDTlqZZN”]We can put the blame for that squarely in the hands of CannTrust (TRST.T) and the ongoing scandal over their growing of illegal cannabis in unlicensed rooms.

It’s been weeks of one damning revelation after another, and this morning it seemed things were getting very much worse.

Today, CannTrust lost its auditor and had an awful start to the day, but the stock price drop over the last few weeks combined with its inherent (and seemingly unchanged) ETF weighting, meant the robots saw it as under-represented in the ETFMG fund this afternoon, and bought, well… anything on offer, with no human interference. 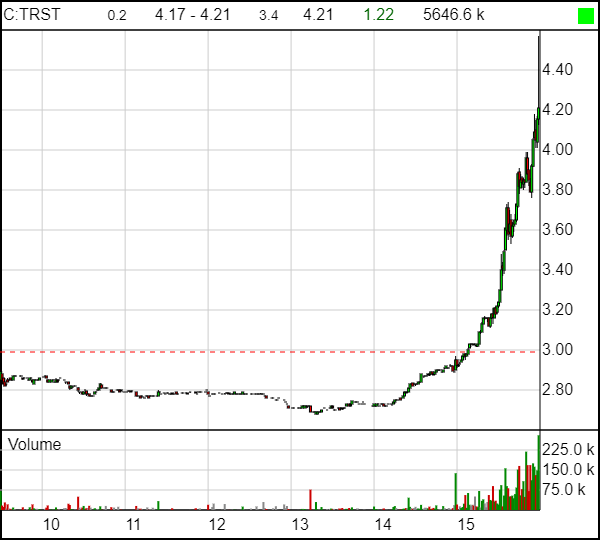 TRST had been, and rightly so, in the doghouse for weeks, but these ETFs are set with weighted algorithms applied, so when a big boy like CannTrust gets sliced up properly and the stock becomes worth much less, the robots kick in at the end of the quarter and just buy more until the value of their holding matches the metrics that have been pre-ordained.

Clearly, nobody at the ETFMG desk had been following CannTrust’s legal worries.

Or had been told they’re not part of the plan. 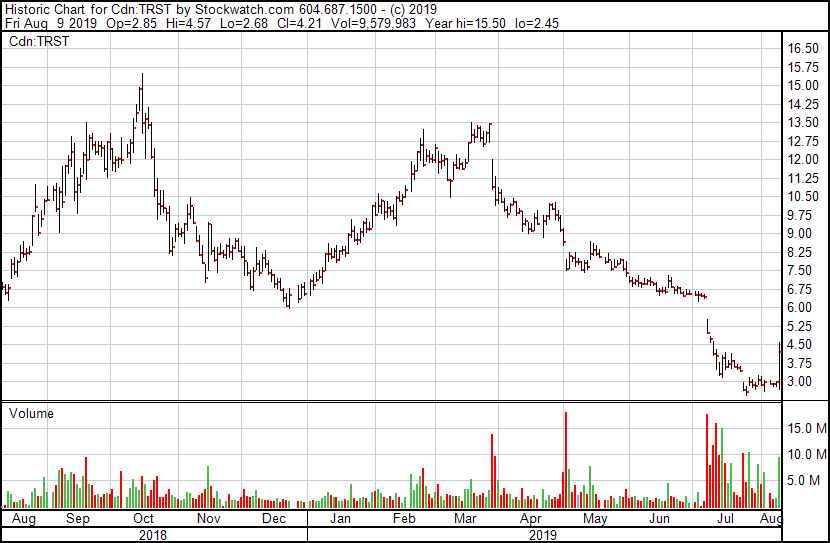 The weighting can really make it hard for investors to understand what they’re buying, and can also be a real boon to some companies over others.

As an example, CRON.T is heavily weighted in several ETFs, which is why it has such a massive market cap.

From the ETFMG fund prospectus:

Also from that document:

The Fund uses a “passive” or indexing approach to try to achieve its investment objective. Unlike many investment companies, the Fund does not try to “beat” the Index and does not seek temporary defensive positions when markets decline or appear overvalued.

ANOTHER BEATING FOR UNDERVALUED SUPREME

FIRE’s last few months haven’t been kind to investors, and that’s for several reasons, none bigger than when they brought in a ton of early financing back in the day.

Back when Supreme was in the $0.35 range, they raised a bunch of money, as early weed companies tended to do, which came with warrants attached worth around $0.50. Supreme still has some of that money it raised sitting in its bank, waiting to be used on the right targets. It has been nothing if not patient with its dry powder.

But it created a problem that has rolled over Supreme like a swarm of locusts in the last month.

2016 John Fowler made a decision that would haunt 2019 Nav Dhaliwal, but REALLY BENEFITED 2016 John Fowler by helping him build a business, and is also making those who supported him in the early days of Supreme very wealthy today. Which was the object of the enterprise in 2016.

So Supreme will take the hit from those warrants, just as Aurora will take a hit from warrants early next year, and just about every other LP will do when their own early financings spawn demons.

The Supreme $0.50 beasts set to expire this quarter included around 22 million in-the-money warrants that would expire in mid-June, mid-July, and late August.

WHY WOULD CHEAP WARRANTS MAKE THE PRICE OF THE STOCK GO DOWN?

A warrant is an agreement to be able to buy a share from the company at a later date for a set price. If FIRE stock was below $0.50 right now, the warrant would be worthless, but even at $1.15 today, your broker has probably been calling you up and asking you for a cheque to execute those sweet cheap shares.

But it also means, if you’re still sitting on your FIRE stock worth 3x that warrant price, you’re likely going to sell those shares to pay for the execution of the warrants.

And that selling, if it outpaces the buying in the market, makes the stock go down.

[contextly_sidebar id=”STfPVq0EqaScA9QW2F2HQr2ysQWcv7RE”]That’s been the weight on Supreme over the last few months, and it’s not done yet.

The August batch is still yet to die, and there’s a bunch of even cheaper warrants closing up in April of next year, though that’s far off enough that it’ll give investors some room to rally, if they believe in the company’s promise.

Taken in context of the day, Supreme’s 14.2% slide Friday was a killer, though if you project it across the last two years, FIRE investors are pretty close to flush. Not a great result, but certainly others have had better runs, but it’s not about what the stock is at today, it’s at what the stock will do when your timeline ends.

If you’re invested for a daily return, and jump in and out of stocks regularly, nobody at Supreme HQ is going to sweat for you. If you’d planned to send little Timmy to college on your FIRE holdings on August 29, you’re not going to get there.

But if you, like me, have bought every time Supreme is cheap, and have an outlook for them that goes years, not weeks, today’s drop is largely irrelevant.

The company is, of course, much further along in its business plan than it was in mid-2017, delivering quality product that consumers and vendors are talking loudly about. The company isn’t profitable yet, but the losses are minimal, and the war chest remains hefty.

And then there’s Monday.

With the weekend upon us for folks to look at that share price and see some opportunity, it’d be smart to watch the early Monday morning trading as investors decide whether they’re smarter than the robot buying up all the TRST stock, putting a 50% jump on its formerly depressed share price, even though it may be worth a lot less if they lose their Health Canada licensing in the coming days.

Supreme is a company we at Equity.Guru believe in, and have since its inception. In a short term sense, today was a terrible beat down. But if you believe this is a company that has built a reputation, and a team, and a facility that is worth well more than the $343 million assigned to it currently, then warrants shouldn’t give you pause for thought.

This too shall pass. Quality always wins.

UPDATE: After initially suggesting our theory was incorrect, New Cannabis Ventures’ Alan Brochstein dug up some numbers around the moves made by ETFMG and showed our judgement to have been correct. 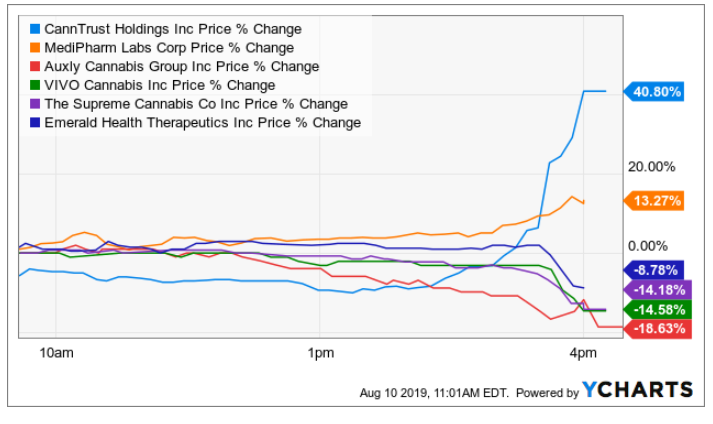 Supreme jumped Monday and has continued to rage forward in Tuesday trading, settling in back around $1.38 and taking back all the ETF-related losses. 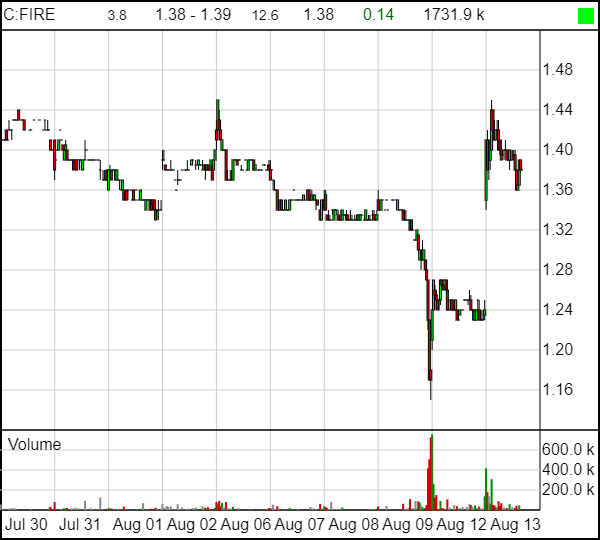 FULL DISCLOSURE: Supreme Cannabis is an Equity.Guru marketing client and the author owns stock – and will be buying at the open.