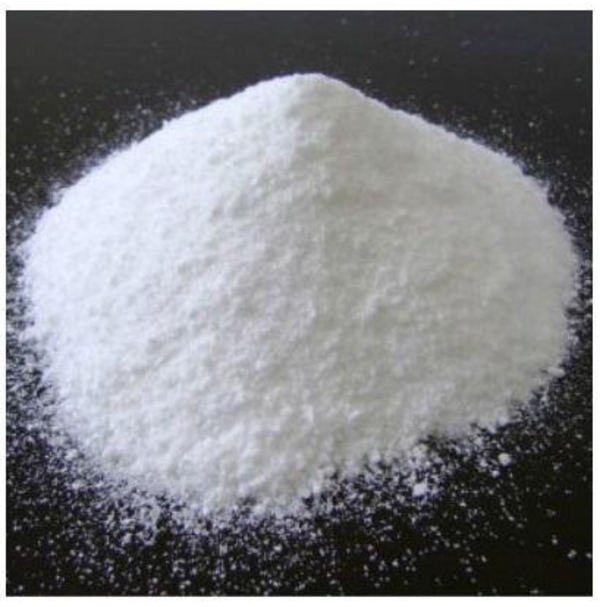 This is a big deal for companies operating in Canada’s O&G arena.

Awards were handed out in 12 categories under the following banners: Operational and Project Excellence, Innovation and Researching Excellence, and Exporting Excellence.

And the winner of the Innovation and Research Excellence, Power and Storage category is…

E3 Metals Corp (ETMC.V), a company we have been following from the get-go.

The Award is an important recognition of the Company’s advancement of its lithium extraction technology and signals broad industry support for the growth of Alberta’s lithium industry.

Cool beans! And credit where credit is due. This recognition adds validity to E3’s Leduc Reservoir resource, and the proprietary ion exchange lithium extraction technology the company is currently developing.

But why all the fuss?

The entire planet is getting electrified. Energy storage, from power grids to electric vehicles (EVs), is what it’s all about.

The E-Mobility (Electro Mobility) supercycle is intensifying and the demand for lithium is about to go through the roof.

The question is: can supply keep pace with this growing demand?

U.S. lithium expert Joe Lowry expressed his concern to delegates at the Latin America Down Under mining conference in Perth recently:

It might be time to begin thinking about getting positioned in undervalued, resource-rich lithium stocks.

E3 Metals – what it’s got, and what it’s developing

The company is sitting on top of one of the largest lithium resources on the planet – 6.7 million tonnes of lithium carbonate equivalent (LCE) at an average grade of 75 milligrams per litre. 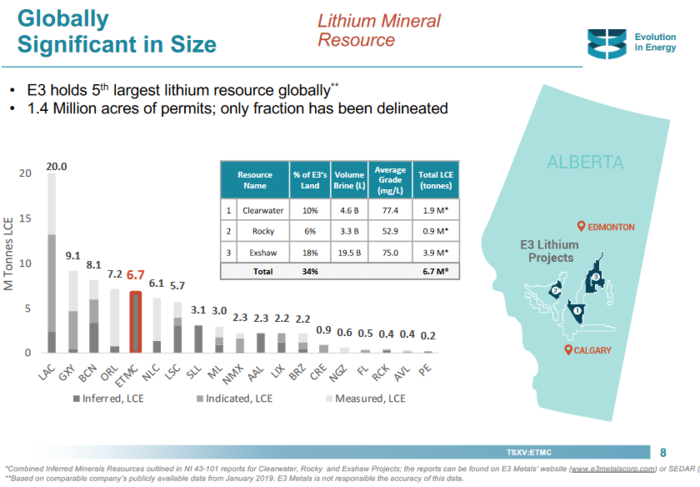 Having delineated this massive resource, E3 is now developing a process – a proprietary ion exchange lithium extraction technology – to unlock the lithium values sloshing around in these boiling hot subsurface petro-brines. 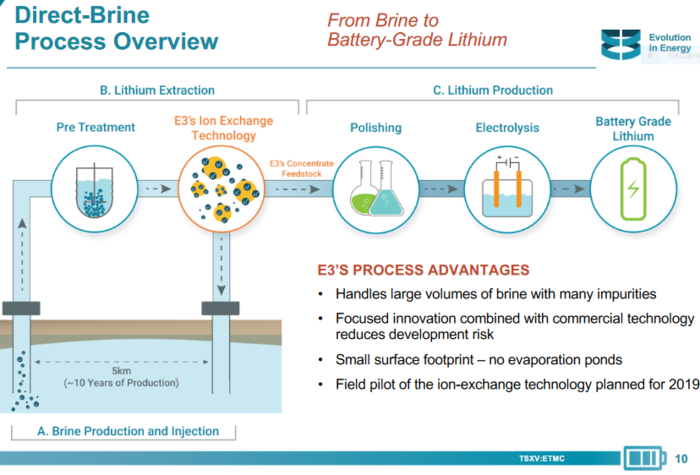 A network of wells deliver the petro-brine to the surface for lithium extraction. The above image also depicts the re-injection of (lithium-void) brine back into the reservoir.

Step B depicts the ion-exchange lithium extraction process which selectively extracts lithium. This step will reduce the brine volume as well as concentrate the lithium.

Ion-exchange is a well-understood water treatment process, one that uses a sorbent for the exchange of similarly charged ions within the petro-brines. 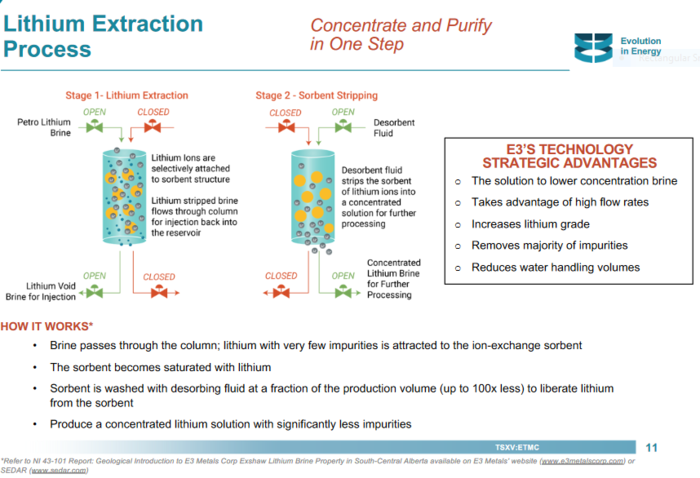 The sorbent developed by E3 Metals and the University of Alberta has been designed to be highly selective for lithium, as opposed to other undesirable dissolved ions such as Ca, Mg, and Na.

The goal is to demonstrate the feasibility of the project, to continue de-risking its proposed lithium production flowsheet and advance the project further along the development curve.

“E3’s goal is to produce battery-grade lithium hydroxide that can be used directly within lithium-ion batteries, allowing E3 to fetch top value for our product.”

Using its proprietary ion exchange lithium extraction technology, the company produced a lithium concentrate and then went on to further refine and purify the solution by polishing processes and electrolysis. In the end, the purified lithium solution was successfully crystallized into lithium hydroxide.

These tests at the University of Alberta were repeated successfully over and over.

This is a huge milestone for the company, a huge leap forward.

Highlights stated at the top of this press release:

Lithium hydroxide is typically produced from lithium carbonate and can be very expensive to produce with existing technologies. By producing lithium hydroxide directly from brine using our Extraction Technology and process flowsheet, E3 aims to develop a highly efficient, low cost process having the potential of creating a new standard for the industry.

Continued success in the development of this innovative extraction technology, coupled with its massive Leduc Reservoir Li resource, will enable E3 to secure binding off-take agreements from strategic customers requiring access to a long-term lithium supply.

Things are really starting to get interesting here.

Lithium hydroxide production was achieved through the following processing steps:

“Producing lithium hydroxide powder from brine within our Alberta Lithium project is a step towards a commercially sellable product aimed directly to lithium battery manufacturers. It offers an attractive economic value potential as we advance our project. This achievement gives us a high level of confidence that we can rapidly unlock the tremendous potential of our vast Alberta lithium resource with the right production process flow sheet.”

With 24.97 million shares outstanding, this is one of the tighter share structures I’ve come across in the resource arena. E3 Management appears to want to keep it that way. Note the size of the most recent PP financing:

Equity.Guru’s own Chris Parry on the subject:

“What I really like about this crew is they raise money as they need it, but in small doses, because they only need small injections of funds to move things along. They’re not raising $20m at a low share price, they’re picking up $100k in a financing here, another $100k in grants from the government over there, they’ll toss out some shares for debt to protect cash… this is a grown up team doing grown up things that protect your money.”

Based on its recent trading range in and around the forty cent level, the company has a market cap of $10.74M.

With a modest market cap and a tight share structure, we believe the company is positioned for rapid growth.

Full disclosure: E3 Metals is an Equity.Guru marketing client. We own stock.