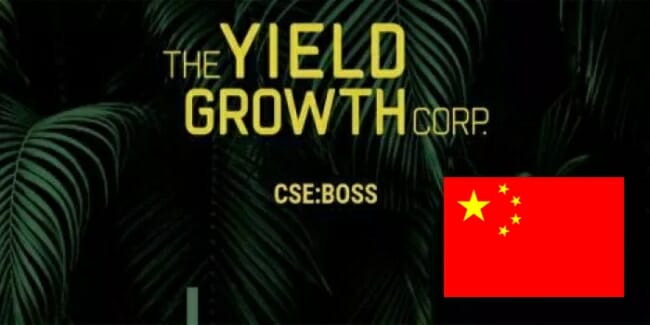 Wellness industry disruptor Yield Growth (BOSS.C) has announced plans to expand one of its fastest-growing product lines into China, setting the stage for aggressive global expansion in the multi-billion-dollar CBD market.

From Oregon to … China?

In an official press release on Tuesday, Yield Growth announced it has shipped its first Urban Juve products to Hong Kong, one of China’s Special Administrative Regions (SARs, not SARS).

But Urban Juve – a modern wellness product powered by hemp – won’t be sold at brick-and-mortar stores, but at AI-enabled kiosks called PopSquare.

If this is the first time you’ve heard of an AI-enabled kiosk, join the club. Apparently this is a pretty big deal in China. PopSquare uses “big data, computer vision, sensor fusion and machine learning technologies” to help businesses optimize product placements and markets.

“The advanced technology in the PopSquare kiosk makes it possible for us to leverage data in a brick-and-mortar setting-bringing the advantages of e-commerce shopping to physical locations.”

“In effect, we’re creating a unified experience across every point of purchase.”

Just before the China initiative was implemented, Yield Growth announced it was launching a new cannabis product line in Oregon. The soon-to-be Oregon-based Wright & Well will go live in June, and will offer nine wellness products that incorporate high-quality CBD, THC and hemp root oil.

Oregon was one of the first U.S. states to legalize recreational use of marijuana back in 2014. ‘Measure 91’ passed by a vote of 56% to 44%. Yield Growth is headquartered in Vancouver, B.C., so expanding along the Pacific coast and now the Pacific Rim just makes sense.

U.S.-China trade negotiations took a dramatic turn earlier this month after Beijing reportedly backed out of a pending agreement. President Trump responded with a Twitter tirade and less than a week later some $200 billion worth of Chinese exports to the U.S. were taxed at a rate of 25% from 10% previously.

China responded by targeting $60 billion worth of U.S. goods with higher duties.

The U.S. Trade Representative’s office probably responded with something like this (pure speculation on my part): “Oh yeah? We’re going to tax the hell out of you now.”

So the Trade Representative’s office identified a list of $300 billion worth of Chinese imports that could face higher duties. And if you’ve been paying attention to the news recently, you know that the U.S. just barred companies from doing some business with Huawei, China’s smartphone giant.

None of this impacts Yield Growth.

As it turns out, China has quietly become a cannabis superpower, which is befitting given that hemp was probably first twisted into rope there around 2,800 B.C.

Shockingly, China grows nearly half of the world’s legal hemp. Two of the country’s 34 regions are cultivating cannabis to produce CBD, a market that Yield Growth believes will be worth $1.1 billion by 2025.

We mentioned earlier that Hong Kong is a SAR of China, which means its laws and customs vary from slightly to significantly from the rest of the country. While mind-altering marijuana has no chance of becoming legal anytime soon, CBD oil is fair game in Hong Kong.

More specifically, “CBD oil with little or no THC is not a prohibited substance or product in Hong Kong.”

As for Urban Juve, it will be rotated through six different high-traffic locations across Hong Kong using the AI-powered kiosks described earlier. These include Hong Kong University of Science and Technology, Hong Kong Science Park, Park Yoho, Cyberport and Olympian City Mall.

Through Urban Juve, High Yield is betting that the Hong Kong market represents a sizable chunk of that $1.1 billion pie. Only time will tell whether the gambit pays off.

One thing is for sure: Yield Growth is betting big on the region. Earlier this year, the company entered into an agreement with Pontier Services to offer Urban Juve products through WeChat, China’s biggest messaging app.

Full Disclosure: Yield Growth is an Equity Guru marketing client, and we own the stock.