Last week, one of 1933 Industries’ (TGIF.C) executives was named a High Time’s Women of Weed honoree alongside 20 other women in the cannabis space making “change, progress, and advances in their fields.”

Ester Vigil, 1933’s U.S. VP of Sales, was recognized on International Women’s Day for her work in the cannabis industry–a famously gender-equitable sector–as a way of giving thanks to the many women making legal marijuana possible.

Vigil brings over nearly two decades worth of experience from the cosmetics industry before switching her focus to cannabis.

In her capacity at 1933, Vigil is responsible for sales initiatives, securing product placements and marketing products across all sales channels.

“I am extremely honoured to be part of such an esteemed group of forward thinkers, innovators and trailblazers in the cannabis industry. From CEOs, marketers and professionals specializing in cannabis to activists and pioneers in the fight to end prohibition, the honorees include some of the leading women changing the face of this industry,” Vigil said.

Vigil’s skill set is sure to come in handy given 1933’s latest purchase: TGIF just closed its complete acquisition of Infused MFG, a company it held a 91% stake in up until recently.

1933’s U.S VP of sales has a personal track record of growing the Canna Hemp line of products to over 600 retail outlets across 46 U.S. states.

Paul Rosen also joined the team as a strategic investor. Rosen is known for his work as a consultant, entrepreneur, and for his active presence in the cannabis scene in Canada.

He sits on the board of several cannabis companies such as iAnthus and Cronos Group (CRON.T).

“We are extremely pleased to welcome Paul as a strategic investor in the company. Paul has been involved with some of the most iconic cannabis businesses in Canada and across the world. As an industry veteran and visionary, Paul shares our view of the rising opportunities in the U.S. as more states develop regulations and open up cannabis markets,” said Brayden Sutton, president and chief executive officer.

1933 is not pursuing growth only through M&A to increase top line revenues. Valeant tried that in the pharmaceutical space a few years ago and failed miserably.

Instead, 1933 has actually employed people to find synergistic alliances in its newer acquisitions to execute a vision.

1933 announced its intent to purchase the remaining 9% of Infused MFG on March 28, 2019, bringing its total ownership position to 100%. Equity.Guru’s own Lukas Kane wrote about their aggressive expansion last month. 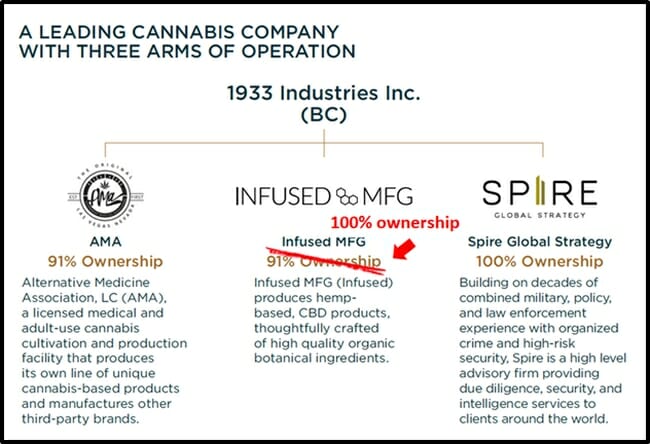 As the first licensed cultivator in Las Vegas, 1933 is already capitalising on a first mover advantage in the space.

The company is currently constructing a 67,750 square feet cultivation-only facility in Las Vegas and has recently acquired a 12,160 square foot building for hemp-CBD processing.

1933 is one of those “dark horses” in a race. The kind of player that you ignore until they come out winning.

One can see that 1933 has a clear vision for their own future, and has employed the right people to execute and deliver on exactly that mission.