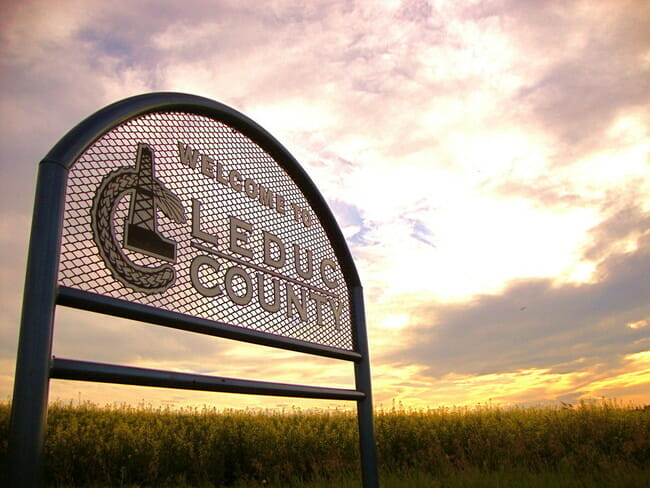 E3 Metals (ETMC.V) has delineated one of the largest lithium resources on the planet –  some 6.7 million tonnes of lithium carbonate equivalent (LCE) at an average grade of 75 milligrams per litre. 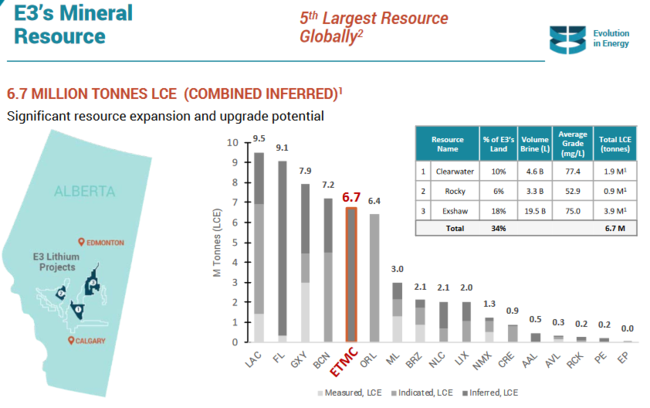 The source: subsurface petroleum brines sloshing around in the prolific Leduc Reservoir of Central Alberta.

These lithium-rich brines come to the surface during oil and gas production. Treated as waste, they are reinjected back into the reservoir with nary a second thought.

Having discovered value in these hot salty brines, E3 is now developing a process – a proprietary ion exchange lithium extraction technology – to unlock the value from this massive untapped resource.

The process, in a nutshell:

A network of wells would deliver the petro-brine to the surface for lithium extraction. The above image also depicts the re-injection of (lithium-void) brine back into the reservoir.

Step B depicts the ion-exchange lithium extraction process which selectively extracts lithium from these petro-brines. This step will reduce the brine volume as well as concentrate the lithium.

E3’s proprietary concentration/extraction technology is evolving rapidly. The goal here is to demonstrate the feasibility of the project, to continue de-risking its proposed lithium production flowsheet and advance the project further along the development curve.

On Dec. 4th, the company reported success in concentrating its lithium nearly 20 times over, to 1498 mg/L Li. That was a win.

A quick primer on what this technology is all about

Ion-exchange is a well-understood water treatment process using a sorbent that involves the exchange of similarly charged ions within the brine.

The sorbent developed by E3 Metals and the University of Alberta has been designed to be highly selective for lithium compared to other unwanted dissolved ions – Ca, Mg, and Na.

This lithium extraction process is a low-energy method that requires no solar evaporation with a rapid reaction time.

Alberta is tied to oil production. The jurisdiction is industry friendly – regulations and permitting processes will be a straightforward affair.

The region is flush with infrastructure. There are good pipes in the ground available for E3 to repurpose for the production and processing of lithium-rich brines.

From the company’s project page:

Another advantage is the high temperature (70 to 100C brine) and high flowrates (up to 10,000 m3/d of brine per well) allowing for the potential of geothermal power generation or heat recovery. The use of this energy is expected to lower both operating costs and greenhouse gas (GHG) emissions. The Company is confident that its development strategy will produce some of the world’s most environmentally responsible sources of lithium.

During this most recent testing phase, enhancements enabled E3 to create a more robust sorbent. This produced lithium concentrations 50 to 100 times higher than previous results. These impressive concentration levels – 3142 mg/L and 5367 mg/L respectively – were accomplished without sacrificing lithium recovery while maintaining very low impurities in the concentrate feedstock.

Greater than 99% impurity removal was observed in both cases…

Increasing the concentration levels and producing a high purity lithium concentrate feedstock by way of the company’s concentration/extraction technology, while incorporating the high flow rates from the Leduc Reservoir, are the ultimate goal.

“This increase in concentration using our proprietary Extraction Technology is the key to unlocking the value of our vast, yet lower grade, resource. These results move us a significant step toward supporting E3’s goal of becoming an industry leading, low-cost producer of battery grade lithium products. We have demonstrated the ability to significantly increase our lithium concentration without using additional energy. The higher upfront concentration means less volume to handle downstream from our lithium Extraction Technology and should reduce the energy, inputs and potentially the capital and operating costs required to generate lithium hydroxide. These results continually demonstrate an innovative and robust process developed by the University of Alberta and supported by Green Centre Canada, with funding from Alberta Innovates.”

To reach the target for battery grade lithium hydroxide (LiOH•H2O), lithium is refined, and impurities removed, to reach a 99.5% or greater purity of LiOH•H2O. Removing impurities and concentrating the lithium in a single step is critical to the overall production flow sheet. If these concentration levels can be consistently achieved under full cycle process flow conditions and in larger field-based pilot plant testing, the Company believes the most significant development hurdle will have been achieved.

The market’s response to this technological breakthrough was tepid, though trading has picked up somewhat in recent sessions.

The resource is already there. It’s all about developing the technology now.

As the company continues to de-risk this massive LCE resource, the market will take notice. Big money should begin positioning itself accordingly.

Full disclosure: E3 Metals is an Equity Guru marketing client. We own shares in the company.