Peter Berdusco, CEO, President and Director of Guyana Goldstrike (GYA.V) and formerly boss of Nexus Gold (NXS.V) has a habit of making insider trades, as an executive of public companies, and not filing the paperwork with regulators until later.

So much later that any shareholder would rightly wonder why he’s still in a job at a pubco, or allowed to be associated with a regulated market.

If you think I’ve already written this story once before, you’re mostly right. On October 5 of last year, I published this piece, which pissed a lot of the right kind of people off.

Here’s the cliff’s notes of that story:

Investigators at the BCSC took note of that one, and that may have forced Berdusco’s hand to go file further. And earlier.

Today, Equity.Guru researchers noticed Berdusco has filed more late stock dumping transactions, with some of them filed almost two years later than the days he was selling his own company stock.

They weren’t immediately apparent to the casual observer because, if you look at NXS insider charts, it shows the most recent ten trades made, by default. 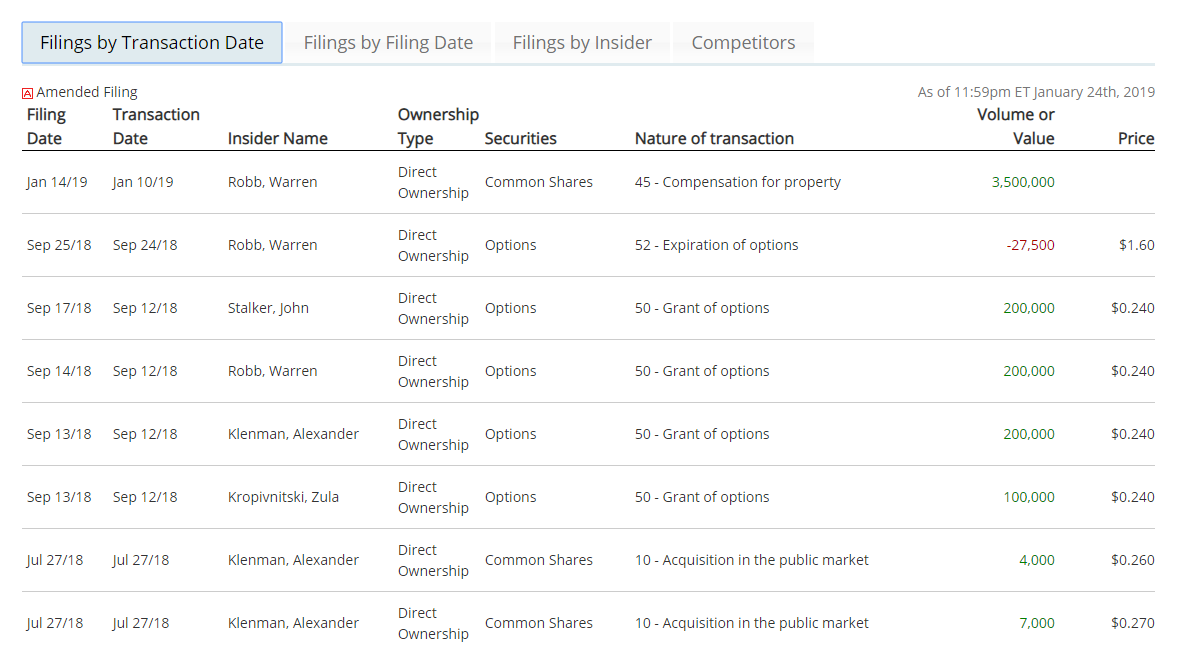 Nothing to see there. Just the current crop of Nexus insiders buying their own stock and picking up options. All fair and normal as they go about undoing the legacy left behind by previous management.

But if you look at that page by ‘filing date’ instead of ‘transaction date’, you’ll find something VERY different, and frankly quite disgusting. 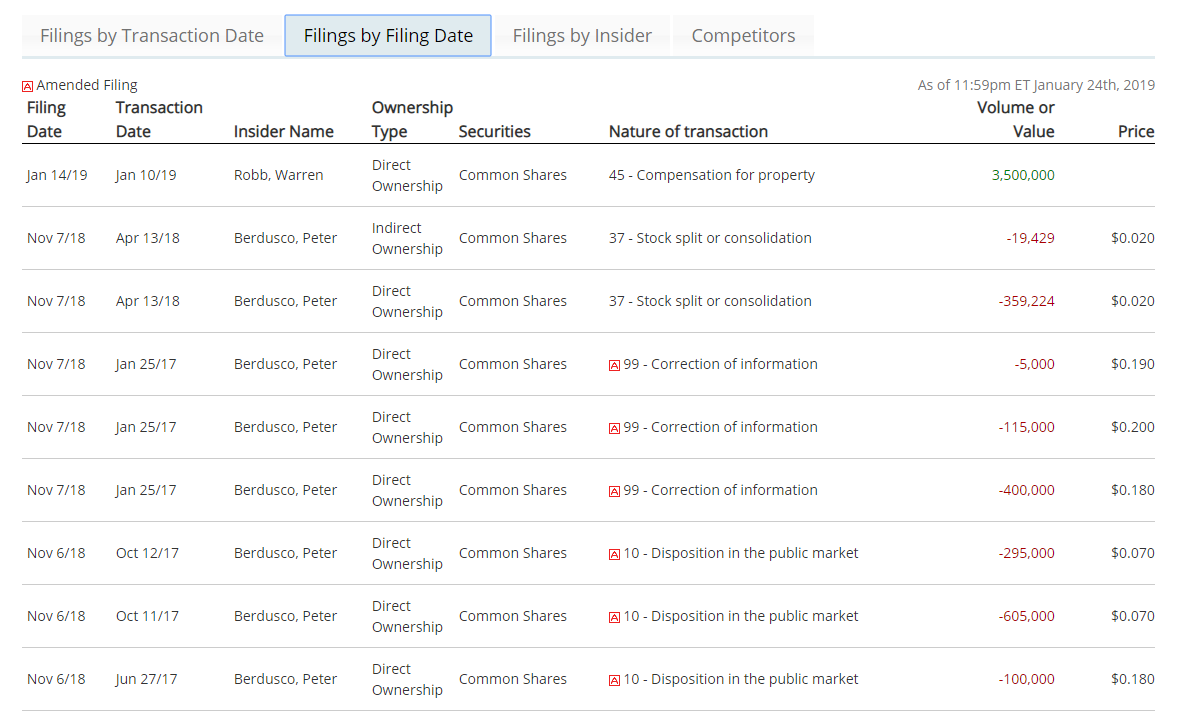 That’s Peter Berdusco filing NEW documentation in November of 2017, a month after our story broke, and going back as much as 23 months in doing so, showing he was selling the shit out of his company stock while not only serving as CEO, but also sending out news releases saying he had no idea why the share price was falling dramatically.

The timelines on the most recent filings show some of his previous (late) filings were erroneous. Others appear to be new.

In September 2017, he filed insider sell documentation for Jun 30, October 13, and October 16 of that year. 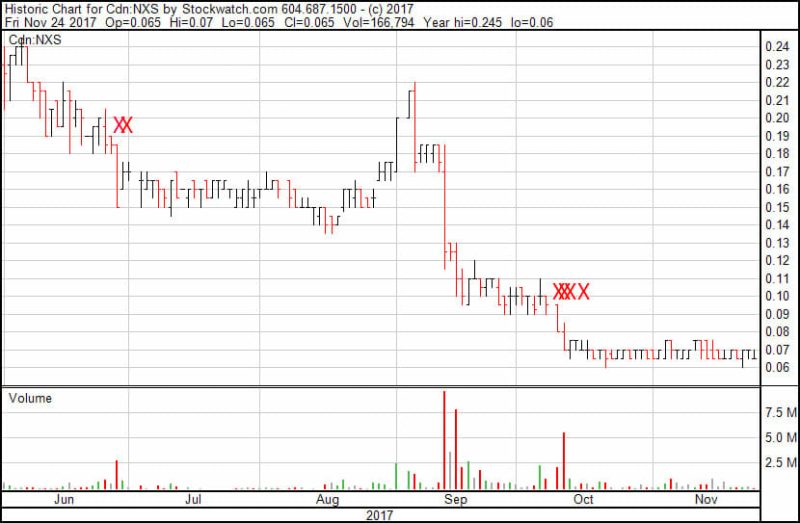 It’s gross that he was selling stock on the sly, while it was sliding in price, and while telling shareholders he had no idea why it was falling.

But, judging by the amounts noted, we’re likely seeing him here correcting earlier incorrect filings with more accurate info. Dumb that he didn’t bother to get it right the first time, and shitty that he never bothered to file at the time he was selling, but we’ve already expressed our outrage at that.

But those filings are posted in addition to what appears to be new amounts going back almost two years, showing the NXS boss has been dishonest with shareholders for a long time.

On January 24 2017, NXS put out news of results from their Niangouela gold concession in Burkina Faso. Those results saw the stock rise markedly, from the $0.16 range to as high as $0.27 in just a few days.

During that time, Berdusco sold nearly $100,000 of his company’s stock, but chose not to file correct and required insider trade docs for nearly two years – and only after he’d left the company (and left it nearly broke) and after our expose on his trading was published, which led to a BCSC investigator looking into details. 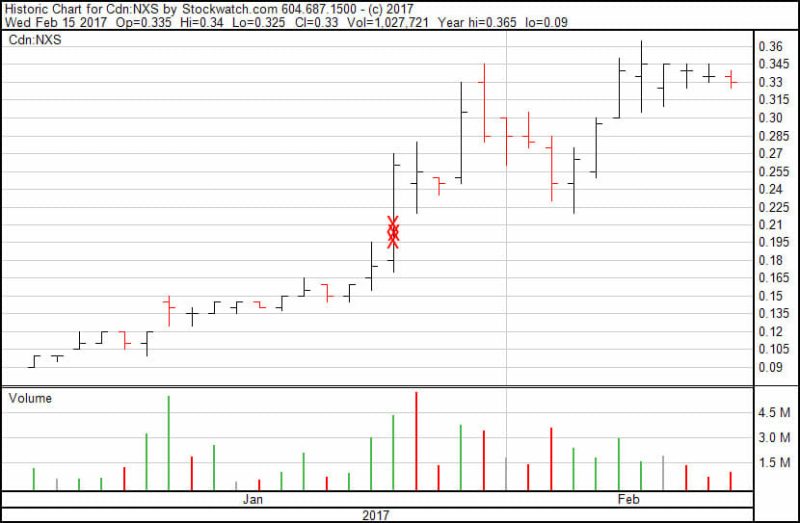 The Company also announces that it will grant 1,800,000 incentive stock options to directors, officers and consultants of the Company.  The options will be exercisable at a price of $0.16 for a period of five years.  The grant remains subject to the approval of the TSX Venture Exchange.

So Berdusco’s filings now show, the day after he granted himself and others $288,000 in stock options at a price that was nearly half what the market was paying a day later, he sold around $95,950 of his personal stock into the open market.

Now, you may wonder how an executive at a public company can get away with this sort of behaviour and still be allowed to do business at another one (currently, Guyana Goldstrike), and the answer to that is, he’s been tacitly encouraged to file in this way.

In talking to staffers at the BCSC in relation to this story back in September of last year, we were told explicitly that the commission is unlikely to charge someone filing late, even years late, with anything more than a nominal fine and a slap on the wrist. because, “If they don’t file at all, we have no way of knowing that, but when they file late, we do, so we want to encourage lateness over an executive not filing at all.”

You may feel like the exchange would step in and monitor this, but here’s what the TSX says about insider filings:

At Canadian Insider, we paid for a full insider report on Nexus Gold, but Berdusco’s late filings were not included in that report because, though he filed them recently, their ‘date of trade’ goes too far back to be included, and the fact that he’s no longer an executive takes him off the insider list their system pulls from.

So those late filings are allowed to slip by almost in total secret.

You’d be right to wonder how many other executives are pulling this fast one, and buying and selling the stocks they represent without ever fessing up to it. We caught Berdusco here because we, as marketing partners of Nexus, were looking deeper at them than most investors would.

But you almost have to think that he’s just unlucky, that he’s the cockroach we caught when we flicked the kitchen light on, while hundreds of others sit under the fridge watching him get stomped.

If nobody is willing to actually police executives as they trade their stock, replete as they are in insider information that can grant them an advantage in trades, what chance toes anyone have in engaging in a clean marketplace?

You’re on your own people. Assume the worst, because who knows how many executives at companies we own as individuals are trading against your interests and not filing at all – ever.

All we know is, if they do so, you’ll never know, and no regulator is watching for you.

PS Guyana Goldstrike shareholders: You may want to inquire as to how many shares are held by Peter Berdusco’s brother, and how he got them, and whether they’re being traded by proxy, because a load of stock was sold off last week, with no news out and no explanation as to why, and we hear family financial connections are strong between those two.

And if you’re really keen, ask about that blockchain deal the company announced last year, that saw a $3 million financing and a massive stock price rise, but has never been mentioned again. 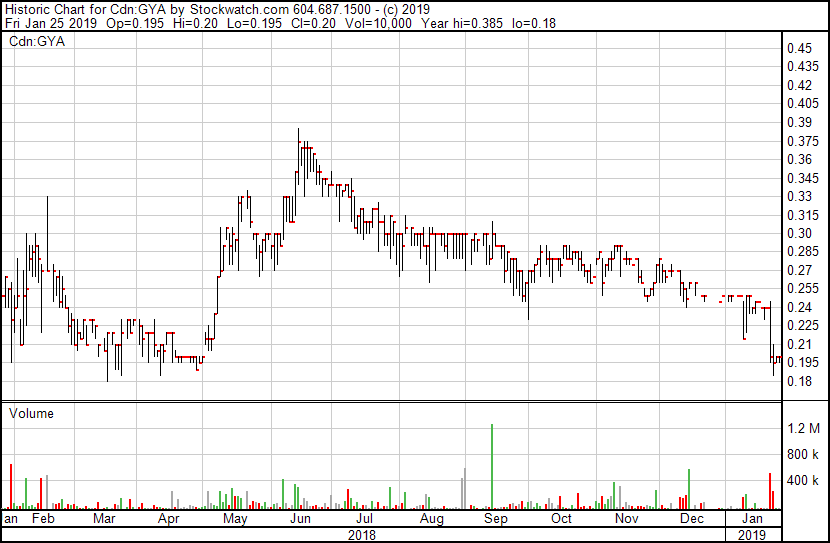 FULL DISCLOSURE: Nexus Gold has been an Equity.Guru marketing client.