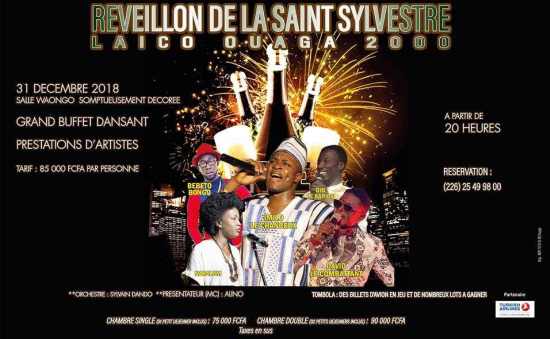 I’m in China now, out in the mountain in Yunnan Province – where I recently wrote about my experiences in Chinese hospitals – which do not conform to western media coverage.

I sometimes have to explain to Chinese people that you do not need a bullet-proof vest to walk downtown in Pasadena, California.

Conversely, North Americans are often jolted to learn that I have never met a single person in China who thinks that democracy would work now in this country.

We tell dark negative stories about foreign lands because it’s easy – it gets clicks – and gives us a warm fuzzy feeling about our own lives.

In the Middle Kingdom I mingle with artists, taxi drivers, farmers, police officers, film executives, hotel cleaners – everywhere I go in China, people are chilled-out, smiling, generous – optimistic about their lives and the futures of their children. 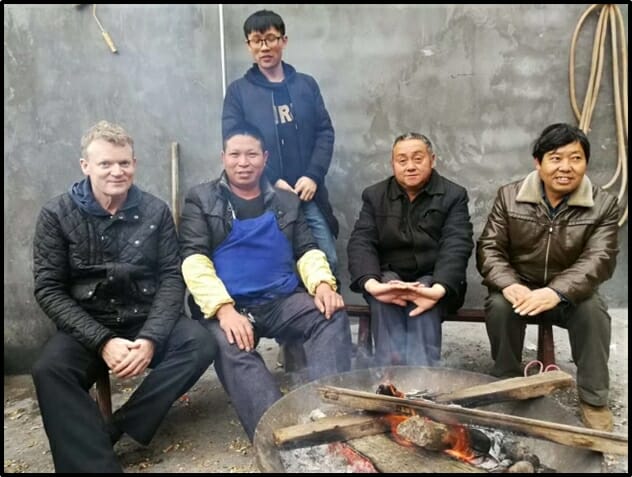 I bring this up because a little-known African country called Burkina Faso is also the victim of relentless negative media coverage.

Burkina Faso happens to be pregnant with gold.

Equity Guru is going to play a small part in changing that.

Our premise is that mining can be a good thing for the people of Burkina Faso, in the same way that factories in China helped drag 400 million people out of poverty.

If you disagree with the premise (there are valid counter arguments), stop reading – or continue – and go to battle with me in the comments section.

Quick review:  Burkina Faso is one of the poorest nations in the world.

The country is victim to violent outbursts, most of which is attributed to the jihadist group Ansarul Islam – who have sworn allegiance to Al-Qaeda.  This group is deadly, but they only have about 500 members.  They usually operate in the North and the east.

Despite this, some good things happening. The country recently built the biggest solar power generator in West Africa and gave a green light to a 2,000 kilometer fibre optic backbone.

“Women farmers are a key part of tackling the food security challenges that the region faces,” states Aljazeera, “because they are often responsible for feeding the family while their husband’s land is geared towards creating a surplus to sell.”

Below you can watch a short documentary about the daily life of a young French-speaking Burkina Faso teenager.

Sarama Resources (SWA.V) an $8.2 million company with a gold project in Burkina Faso that has an inferred mineral resource of 2.1Moz Au, which includes 0.6Moz Au of oxide and transition material.

In addition, the Bondi Deposit has a historical estimate of mineral resources of 0.3Moz Au (measured and indicated) and 0.1Moz Au (inferred).

“Sarama looks forward to framing up the development opportunity and re-commencing exploration work,” stated President and CEO, Andrew Dinning, “which will focus on attractive oxide and free-milling targets in the greater project area.” 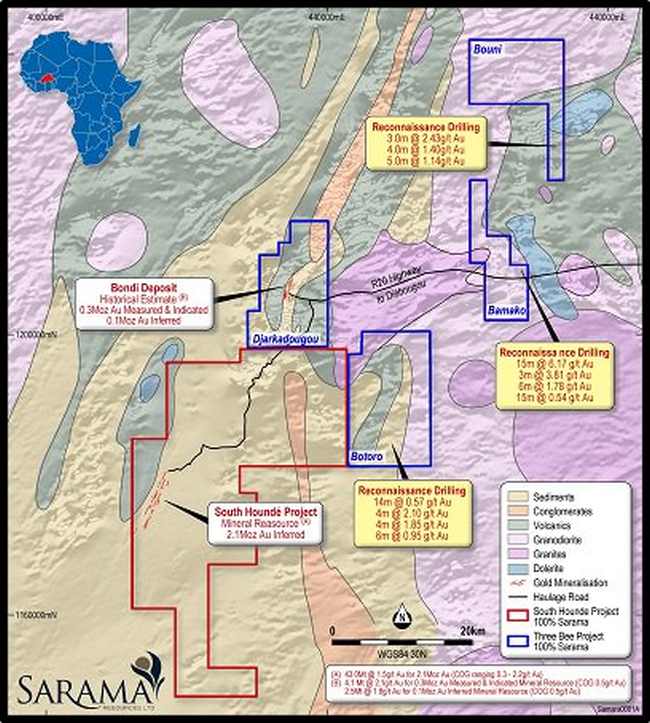 Substantial further upside to Project through: 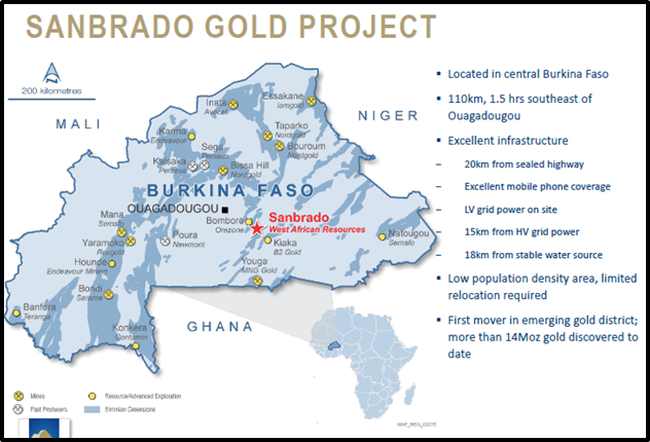 Nexus Gold (NXS.V) is a $3.6 million company with a portfolio of gold projects in Burkina Faso, elegantly summarized below by Equity Guru’s Greg Nolan.

Dakouli 2 – Just to the south of Niangouela, Dakouli 2 is located on the Boromo-Goren Greenstone Belt. Significantly, the project is bisected by the Sabce shear zone, a major structural fault which trends southwest-northeast and bisects the entire length of the property. Sabce is the dominant geological feature underlying Nordgold’s 3 million+ ounce. 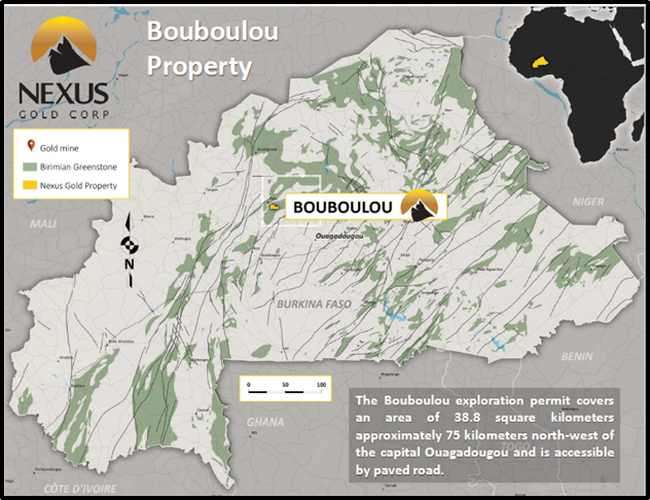 Roxgold (ROXG.V) is a $291 million gold mining company operating the Yaramoko Gold Mine, located on the Houndé greenstone belt in Burkina Faso.

That’s worth about $165 million at current spot prices.

The 55 Zone mine went from its initial discovery in 2011 to production in five years and was completed early and under-budget. Production began in May 2016 and Commercial Production was declared in October 2016.

The 55 Zone is an operating 750 tonne-per-day underground operation which utilizes longhole stoping with cemented rock fill as its primary mining method.

The 55 Zone mine has proven and probable ore reserves to a depth of 750 metres of 1.8 million tonnes grading 11.47 g/t gold for 662,000 ounces. Roxgold has been increasing inferred resources at depth at the 55 Zone and plans to infill drill these resources to enable conversion to reserves.

Bagassi South, the Company’s first growth project is currently in development with commercial production expected to be achieved in the second quarter of 2019.

The Feasibility Study outlines an after-tax IRR of 53.2% with a 1.8 year payback on initial capital, based on a gold price of $1,300 per ounce. 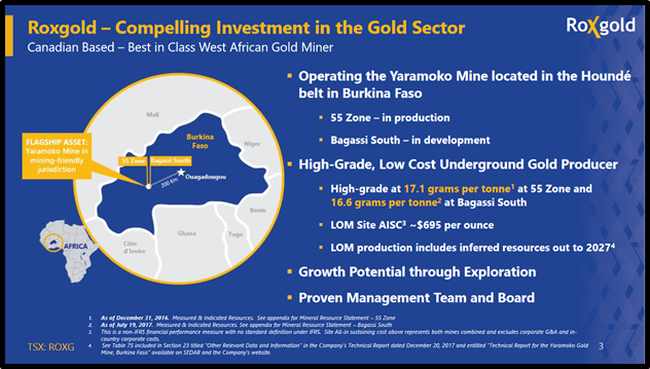 Endeavour Mining (EDV.V) is a $2.4 billion gold company operating in Burkina Faso.  According to a recent Endeavor Mining news release:

Ironically, Africans are going to be important future consumers of gold.

Over the next 30 years, the predicted two billion rise in Africa’s working age population will be slightly more than the increase in the rest of the world combined.

This gives Africa the potential for transformational change.

I am not suggesting Burkina Faso is a paradise.

The girl in the video featured at the top of this article is “sponsored” and therefore her life is relatively charmed.  Being “the 16th poorest country in the world” means that many people are in a world of hurt.

I am suggesting, that, like China – Burkina Faso has another side which we almost never hear about.  And that if we heard more about that side, gold juniors operating in Burkina Faso would be trading at multiples of their current valuations.

Full Disclosure:  Nexus Gold is an Equity Guru marketing client, we have no commercial relationship with the other companies mentioned in this article.