Both Isodiol International (ISOL.C) and its subsidiary have each announced new partnerships which strengthen their capacity to produce functional and cannabis-derived beverages.

The first partnership was announced by the company’s wholly-owned subsidiary, IsoBev.

IsoBev signed an agreement with craft-beer brewer Brew Hub earlier this month for the development and manufacturing of beverages made from hemp, cannabis and their derivative products.

IsoBev will own the proprietary brewing formulas and IP developed as a result of the partnership while its partner will manage the brewing, packaging, distribution and sales of said products.

“Many industry competitors claim to have ‘water soluble’ CBD ingredients but are disingenuous about the water solubility of naturally hydrocarbon-based CBD. However, Isodiol is unique in its pharmaceutical understanding of molecular CBD and its delivery methods.

Brew Hub operates its taproom and pilot brewery in St. Louis, Missouri. The company has since opened a second brewery in Florida capable of producing over 100,000 barrels (bbl) of beer annually.

“We consider Brew Hub to be the preeminent “Partner” brewing company in the craft beer space and to be among the few brewers able to anticipate industry trends and educate distributors and customers as those trends develop.”

The partnership is a joint effort into the research and development of hemp-based beers and functional beverages, complimenting IsoBev’s latest announcement.

Record Street Brewing has a pre-existing brewing contract with Brew Hub, the company which recently partnered with Isiodiol’s subsidiary.

In August, Isodiol announced the hiring of a lead brewer and the acquisition of a pilot brewing plant in August, fully-equipped with fermentation tanks and bottling lines.

As Nevada has legalized both recreational and medical cannabis use, the partnership with Record Street will provide a home for this equipment in a state which allows for the sale of hemp and cannabis-derived CBD beverages.

“This partnership with Isodiol is a real learning opportunity for Record Street and will provide us with access to high quality traditional ingredients for new product launches like coffee porters and seasonal offerings, as well as the use of some great brewing and bottling equipment.”

Though federal and state regulatory agencies in the US largely prohibit licensed breweries from venturing into the cannabis market, Isodiol believes the development of beverages made from hemp still offers a significant economic opportunity. 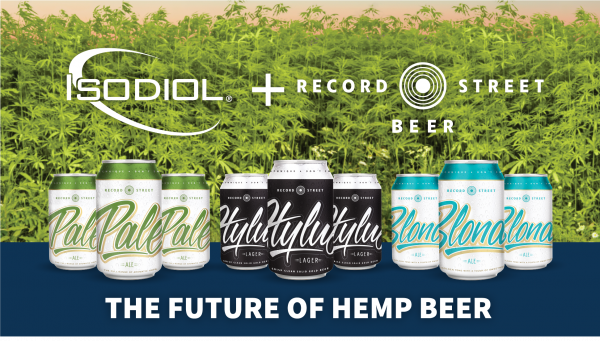 Much like the partnership between its subsidiary and Brew Hub, Isodiol International will have rights to all formulas and IP which contain Isodiol’s proprietary ingredients.

Isodiol will also supply its partner with proprietary coffee, tea and flavouring ingredients for the development of its beer. These products will be supplied by Culinary Coffee, a Florida-based coffee roaster which Isodiol acquired in 2017.

“We are very excited about the ability to have research and development space for both brewed and carbonated beverages and to utilize Record Street’s brewing and market testing knowledge in Nevada and California.”

With the announced partnership with Record Street, the company now has a comprehensive beverage division at its disposal.

Isodiol can now develop brewed beverages, coffees and teas on the East Coast through Brew Hub and Culinary Coffee, while its partnership with Record Street grants access to the American West Coast.