Health Canada has just granted one of GTEC Holdings’ (GTEC.V) subsidiaries an updated cultivation license which allows them to sell their product, albeit in a limited capacity.

Alberta Craft Cannabis (ACC), the recipient of this new license, can now sell B2B. This means they can now offer their cannabis to other LPs, nurseries and other license holders under the Cannabis Act.

David Lynn, COO of GTEC, said the move to update ACC’s cultivation license may be Health Canada’s response to the recreational cannabis shortage which has plagued government-run dispensaries nationwide since legalization.

Typically, companies without sales licenses were unable to sell their product anywhere. No matter how good their product was or how sorely it was needed on government-run shelves, it would sit in the supply chain until a sales license was granted.

Now, companies like GTEC can sell their product to companies which can sell to liquor boards, thereby mitigating the recreational cannabis shortage and generating revenue at the same time.

“With our previous cultivation license, we did not have the ability to sell cannabis at all,” Lynn said. “It’s still big news for us.  We’ll quickly sell the inventories we have, but its not the same thing as getting our sales license.”

GTEC Holdings still cannot sell to Provincial liquor boards and it cannot sell cannabis to medical cannabis patients, according to Lynn. Although ACC must limit its sales to other LPs, it is still a way to generate revenue.

Lynn said his phone was ringing nonstop from prospective buyers in the last 24 hours, though he said his company was leaning towards supplying GTEC’s partners.

Since debuting on the TSX Venture Exchange in June, the company has partnered with Invictus MD (GENE.V), Namaste (N.V) and Valens Groworks (VGW.C).

Although ACC can now sell to other LPs, the company is still awaiting a final sales inspection.

Norton Singhavon, chairman and CEO of GTEC, said “upon completion of our initial B2B sale, we look forward to transitioning into a revenue-generating company.”

It’s undoubtedly true that allowing cultivators to sell–albeit in a limited capacity–is welcome news to LPs awaiting their sales inspections.

The issue, according to Lynn, is that sales inspections are irregular and unpredictable. Although this helps smaller companies which do not yet have the ability to sell directly, it doesn’t address the larger problem.

“The general sort of consensus within the industry is that there is a general backlog within Health Canada,” Lynn said.

There is some dispute within the cannabis sector as to the central cause of the recreational cannabis shortage.

Some industry insiders like Lynn will point to, among other things, delays in communications with Health Canada and what they feel is a burdensome fee structure imposed upon applicants. 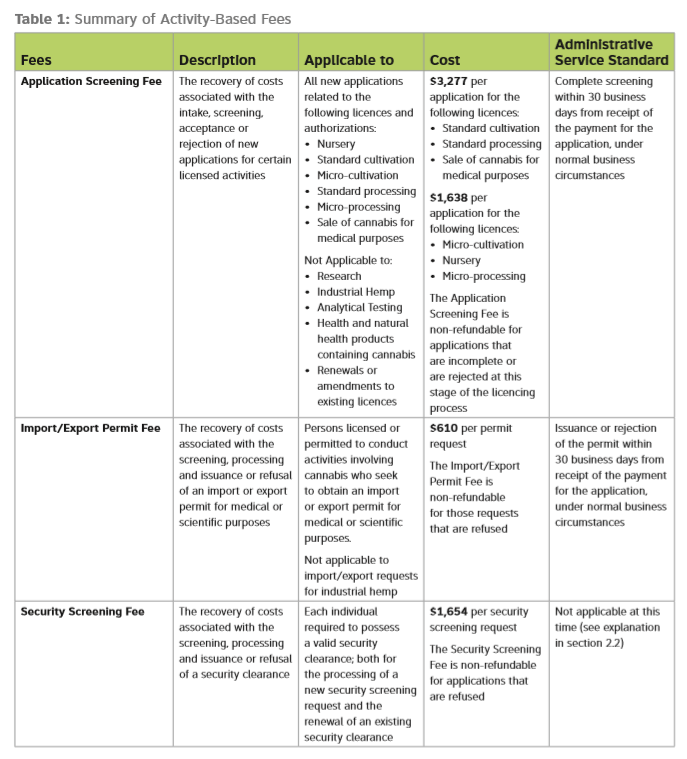 Others like Biome Grow’s (BIO.C) CEO, Khurram Malik, feel the shortage comes from inefficiencies within LPs themselves.

Malik said another reason for the shortage is that a large number of production facilities built in Canada are low-tech, labor intensive and largely inefficient.

Besides the company’s fully-completed subsidiary, ACC, GTEC has seven other subsidiaries and a joint-venture to its credit which cover every facet of the cannabis industry from seed to sale.

Grey Bruce Farms is located in Kincardine, Ontario. The company is a late-stage applicant and will have a 15,000 square foot facility for cultivation once construction is completed. GTEC projects the facility will be finished before year’s end.

Located in Chase, BC, Tumbleweed Farms is another late-stage license applicant which GTEC believes will be completed by the end of Q4. The company’s initial cultivation facility will be 10,000 square feet in size but has the potential to expand another 100,000 square feet. 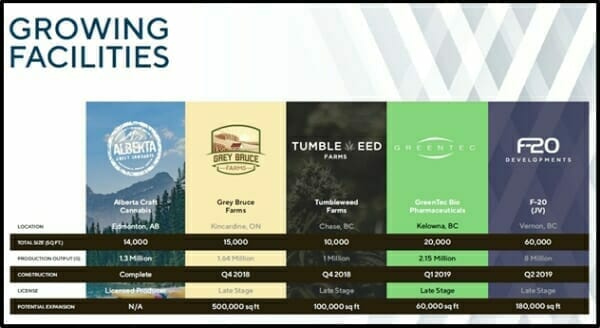 From the company’s investor deck

GreenTec Bio Pharmaceuticals is located in Kelowna, BC. The company will have a 20,000 square foot facility for cultivation once construction is completed in Q1 2019, with an additional 60,000 square feet of potential expansion space available. GreenTec is also a late-stage applicant.

GTEC’s last asset dedicated to growing is 3PL Ventures, a late-stage JV located in Vernon, BC which was formed in conjunction with F-20 Developments in October.

The initial round of construction will deliver a 60,000 square foot cultivation facility which both companies expect to be competed in Q2 2019. If GTEC and its partner choose to expand the facility, 180,000 square feet of expansion space is available.

GTEC also has two laboratory and extraction facilities, Zen Labs and Spectre Labs, which are both concentrate-focused and located in Kelowna.

Zen Labs has already acquired its Dealer’s License. The company has a completed 1,250 square foot facility which has the capability to perform chemical and microbiological tests on cannabis, soil and water for contaminants and impurities.

Spectre Labs is still awaiting its Dealer’s License and is currently under construction. GTEC projects Spectre Labs’ facilities to be complete in Q1 2019. These facilities will provide extraction, formulation and export services to GTEC’s other subsidiaries.

Both Spectre Labs and Zen Labs will be ready to produce concentrated cannabis extracts once the Canadian government incorporates edibles and concentrated into its regulatory framework in 2019.

Lastly, GTEC has a 25 percent stake in Cannabis Cowboy, a dispensary chain targeting Alberta. Furthermore, the company has a 75 percent stake in a “retail initiative” which involves an exclusive store in Nipawin and an e-commerce fulfillment center in Saskatoon.

GTEC has also secured a retail location in BC and intends on applying for eight additional dispensary locations within the province.

Now that’s how you do it.