As has been widely reported, a zoning amendment proposal brought forward by The Green Organic Dutchman and recommended by the City of Hamilton’s Planning Committee was defeated by vote of Hamilton’s City Council this past Wednesday. The proposed amendment (PED18118) would have increased the maximum allowance of 24,000 sq/ft to 968,000 sq/ft of growth space for cannabis LP’s like TGOD operating in Hamilton.

There are currently 5 LP’s operating in Hamilton. TGOD have the most to gain from the amendment being passed as their current plans call for a footprint expansion at their Hamilton facility from 7,000 sq/ft to 150,000 sq/ft.

The Hamilton City Planning Committee is a Council committee tasked with making zoning recommendations to the Council. This particular recommendation calls for the amendment of building codes for Marijuana LPs. In a Saturday press release, TGOD stated that ‘Hamilton City Council voted to reverse the positive decision by the Planning Committee of Council’. The Planning Committee does not make final decisions, but rather studies proposals and recommends their adoption to City Council, who then puts them to vote. The Council voted against this particular amendment 9-4.

Not in my backyard

The council and its residents consistently brought up the fact that these Hamilton cannabis facilities sit inside a conservation area known as The Green Belt, which as of 2005 ‘protects environmentally sensitive areas and productive farmlands from urban development and sprawl.’

The Ontario legislation protecting the Green Belt sets out 4 areas of focus:

At the City Council meeting, local residents like Janice Currie voiced concern that expanding the cannabis industry would negatively affect the Green Belt. “Prime farmland which is allowed to be covered by huge processing facilities is very unlikely to ever revert to conventional farm use. This is vastly incompatible with local and neighbouring properties and it is offensive.”

The Councillors made several references to the fragile ecosystem inside the Green Belt. Councillor Lloyd Ferguson stated: “our issue isn’t medical marijuana, it’s land use, we don’t know how much land will be lost, some forecasters say it’s a multi billion dollar business.”

In response to the councillor’s land use concerns, TGOD pointed out that several non-marijuana commercial greenhouses within The Green Belt currently exceed 1 million sq/ft.

Beleave’s founder also attempted to downplay the impact of the proposed amendment by saying that the four or five cannabis LP’s located in Hamilton who are looking to expand their cannabis operations are merely just ‘small companies, not corporations.’ 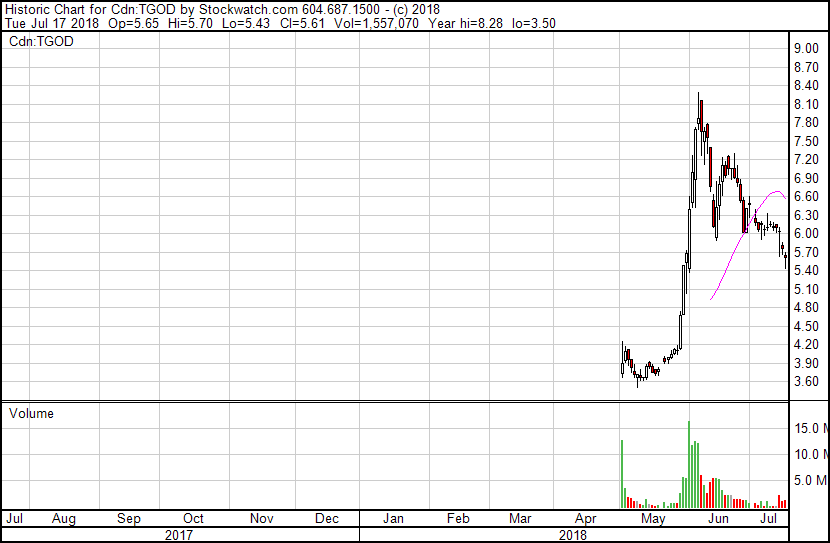 TGOD (TGOD.T) is down $0.43 CAD since the story broke on Friday. News of their thwarted expansion plans spread quickly and the market reacted.

We have been in contact with TGOD who seem confident in the merit of their upcoming appeal to the planning tribunal. They stated that they have worked closely with the City of Hamilton Planning Committee and went as far as hiring three independent law firms to make sure they were up to code.

The company assured us that they took every effort to follow local, provincial and federal regulations, particularly ones meant to protect local vegetation and wildlife. TGOD has its roots in Hamilton and has stated on a number of occasions that it wants nothing more than to have a presence in its home town. They also believe TGOD fits into Hamilton’s culture as a ‘life sciences city.’

In a Saturday press release addressing the decision, TGOD said that ‘if a resolution cannot be achieved in a timely fashion, the Company may simply transfer the Hamilton Phase Two capacity to its 1,107,000 square foot Valleyfield, Quebec site.’

Company literature has the Valleyfield site as the future home of:

TGOD procured a permit to construct the 2,700 square foot research and breeding facility in December of 2017, and received a cultivation license from the facility from Health Canada June 11th.

TGOD put out news today regarding their first international venture. They will construct a GMP compliant facility in Jamaica through a partnership with Epican Medicinals. The facility is planned to be 150,000 square feet, the same size as the proposed Hamilton expansion.

Jamaica is no stranger to cannabis, which is deeply embedded in its culture. It is even a key component of their prevalent Rastafarian religion, which has seemingly done half the marketing work for them. Rastas use Cannabis to bring them closer To ‘God’.