Green Organic Dutchman (TGOD) IPO happens Wednesday: And hell is coming with it

It’s not always an indicator of future glory, but the upcoming IPO landing of cannabis growing/processing/products play The Green Organic Dutchman (TGOD.T) is generating enough buzz that it would appear competitors are seeing their shareholders cash out of their stocks in preparation for it landing May 2. 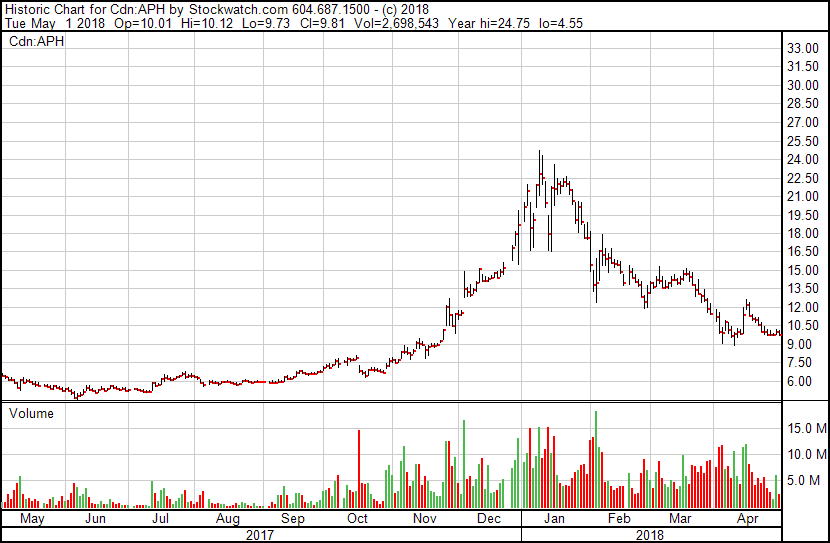 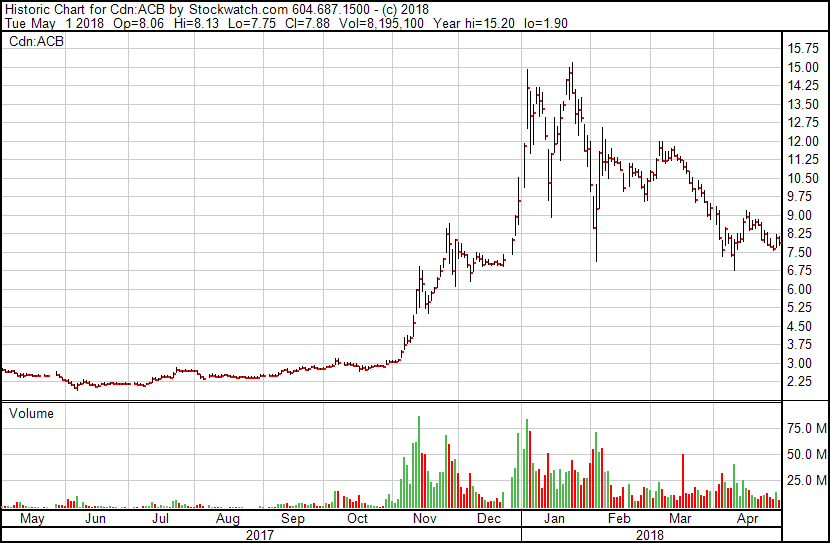 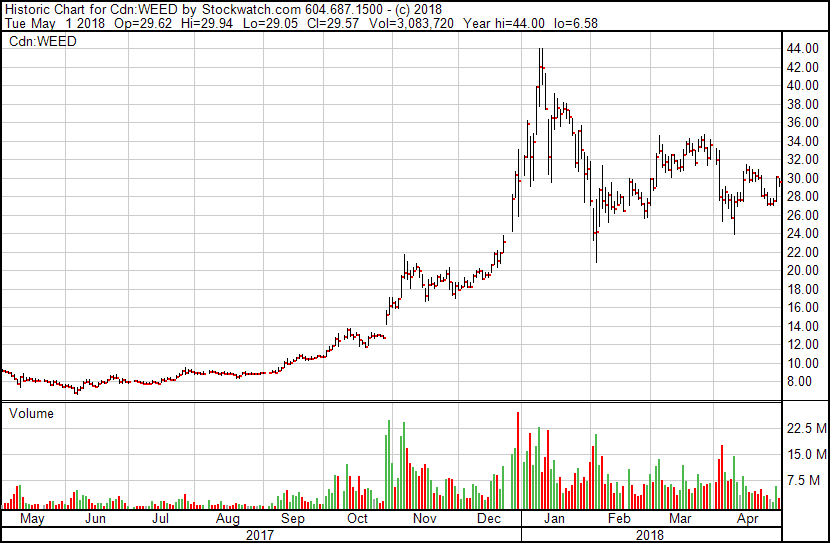 On social media, we’re seeing a lot of things like this: 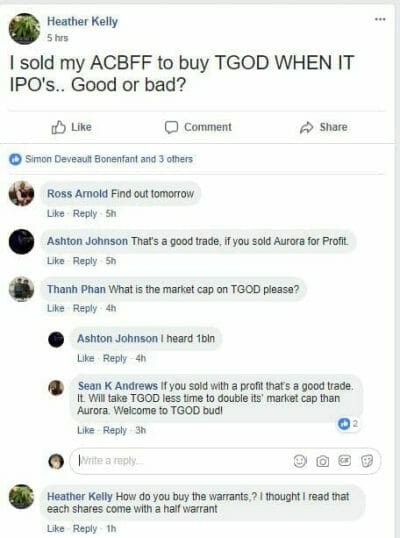 Granted, the weed market has been headed south for a while, but TGOD has been threatening to land on the public markets for a while too, with a couple of false start dates behind them as the process has dragged on, and is bringing several thousand early stage investors along with it.

Those false starts weren’t based on negatives.

Medical marijuana grower Green Organic Dutchman Holdings Ltd. boosted the range on its initial public offering by as much as 15 percent, pushing back its trading debut while it refiled with regulators, a person familiar with the matter said.

The Mississauga, Ontario-based pot grower now plans to raise between C$102 million ($79 million) and C$115 million in the stock sale, according to a filing Wednesday. The company easily raised the C$100 million it had been seeking in the sale last month, the person said, asking not to be identified because the matter is private. Each share was priced at C$3.65, according to a regulatory filing.

In an unusual move, instead of pushing ahead with the IPO, Green Organic and its advisers decided to rip up its original prospectus before the book was closed to allow for more investors to participate and to raise more money, the person said.

The new prospectus took more than a month to complete and contains its latest financials that were released last week, the person said.

The earlier investors have paper they bought for $1.65 or less, which has the naysayers convinced there’s going to be a sell-off on day one. The problem with that concept is, most of that paper is tied up for some time. In fact, the earliest rounds come with a six-month trading hold from the day the company is public. That, and you’re looking at a total share float of around 35m shares available on opening day, which is tight.

That was set up to allow the company to do some deals before their paper comes under pressure, and convince holders that it would be wise to keep holding. Six months seems like a good amount of time to build a company, especially one with this bank balance behind it.

So what is it?

With a retail shareholder base of 4,000 self-directed investors as well as a strategic stakeholder in industry heavyweight Aurora Cannabis, TGOD boasts an impressive following from the investment community and consumer space. The company has raised $160 million to date and is projected to raise another $115 million from its IPO. Proceeds will go toward funding TGOD’s 150,000-sqft of facilities in Ontario and its 820,000-sqft facility buildout in Quebec to reach a production target of 116,000 kilograms.

Other cannabis companies have raised large amounts of money coming public. As an example, Aurora raised just under $90m, but it took them two years to get to that total. TGOD hits the market with $250m in the bank, a monster partner, the lowest cost of energy in the space, a board and C-suite filled with guys who can get more if they need it, and a target rich environment of potential acquisitions that are currently priced at around half what their market caps were six months ago.

I’m going to hand the tiller over to Jason Spatafora, The Wolf of Weed Street, for a bit, and repost what he said on Facebook this morning, because I think he’s on point:

You know the $TGOD IPO is going to be good when people start trying to say it will be shorted & offer no reasoning as to why…. in which case I offered this rebuttal to this line of questioning & just get back crickets: please someone tell me I’m wrong…FYI i own 15,000 shares of Aurora

Aurora went to the extreme length to form a partnership with TGOD that they bought the construction firm that had partnered with TGOD as well as bought 55m shares at $1.65 and bought part of ipo at $3.65 in order to maintain their 17.62% ownership on a pro-rata basis. They also agreed to purchase 20,000 kilos of organic cannabis from TGOD per year.

The reason everyone wants to be aligned with TGOD is pretty simple: their energy cost is 65% less than Canopy, Aurora, Aphria etc and anyone else growing in Ontario and in Quebec it’s slightly better… this is due to their partnership with Eaton Energy $ETN, a $35 billion dollar energy firm that is providing power and automation to TGOD as well as building their smart grid, coGen power stations.

TGOD also is the only Cannabis firm in the world with LEED certification which means they have a zero carbon footprint & recycling CO2 and everything else given off. Consider that 50% of any LP’s monthly burn rate is energy. When everyone else is paying 11.5 cents per kilowatt hour and TGOD is paying .04 cents their bottom line is drastically improved.

These are all good points. I’d add that the company has by far the widest shareholder base of any Canadian weedco that hasn’t hit the markets yet, and they’re aiming hard towards a mainstream retail distribution business model that I think will be how all weed business is done going forward.

Weed in drinks. Weed in capsules. Weed in food. Weed bought from grocery stores and pharmacies, and sourced from whoever is providing high quality for a good price.

And lastly they are certified organic & have been growing under the AAMPR system for 8 years. Organic cannabis has a 50-75% higher margin depending on wholesale or retail. Average cost per organic kilo is $11,000 vs $7,000 (or less depending)….

This point is important. Organic certification used to be a thing that Organigram (OGI.V) used to separate themselves from the pack, but can’t boast anymore. Not since ‘the great pesticide poisoning of 2016,’ anyway.

Aurora has a big piece of TGOD, which made sense at the earlier valuation. The fact that Aurora went in again on the IPO at more than double their previous valuation to maintain their stake in the business is a big vote of confidence. The short seller crowd may think their DD is better than Aurora’s, but I’m gonna bet on the guys with the team of forensic accountants going through acquisition targets.

Also, just so u know I am long on $Acb.to $acbff I am just way longer on TGOD because I think they will see a $3b market cap quicker than Canopy or Aurora. There is also zero resistance in the stock which means no fatigue from bagholders. I also don’t think people that invested in the #Ipo are looking for a quick flip because it’s highly unlikely that they will ever be able to buy stock at CAD$3.65 and there are also tax implications for selling, IE a 20% difference in profit because of long term vs short term capital gains.

But if you believe the social media crowd, TGOD is going to get flattened by short sellers.

Please I’d like to hear why u think TGOD is going to get crushed on IPO rather than what appears to be an emotional connection to Aurora.

Oh, you’ll get no end of takers on that one, Jason. 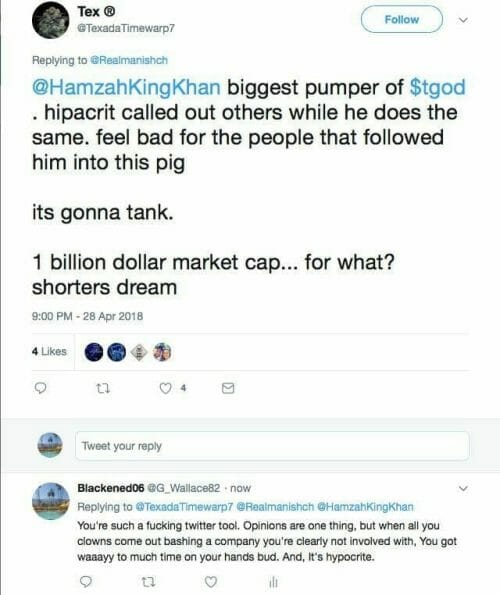 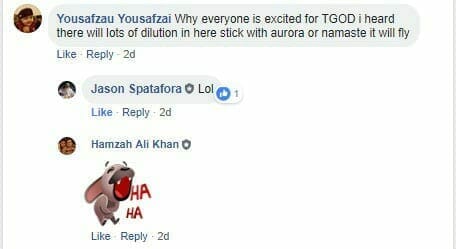 Lots of dilution? Not generally a fan of Baystreet.Ca’s ticker-crammed hard sell, but this is worth understanding:

TGOD’s unique share structure is designed to help the Company succeed when it hits the market. The majority of the Company’s shares are subject to a minimum 6-month hold period from the listing date. In turn, only a limited number of shares priced at $3.65 will be free trading with a goal of limiting downward pressure seen in many IPO’s from early stage investors.

This ain’t the TGOD executives’ first rodeo. They’ve set this thing up to grow hard and have wired it up to play defense.

You wanna sell your stock on opening day?

‘Kay. Ya gotta buy it first. 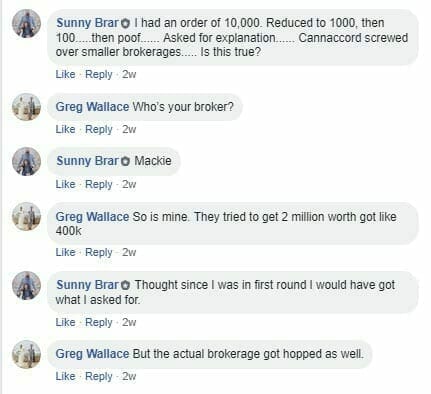 Aurora has already made a fat profit on their investment in TGOD, as has anyone who got into their earlier financings when we wrote about them.

I’m not going to say the thing won’t be overvalued at the end of the day. It might be overvalued in the first hour. But with 1m square feet of grow bought and paid for, which is the same as what Aurora’s building (and even has the same architects and construction folk), only this facility will grow organic weed – you can be damned sure it won’t come in overvalued for anyone who has already secured their stock.

IPOs can be a dangerous business. Just think back to what Facebook (FB.Q) endured in its opening days in 2013, where the valuation shredded hard for a bit.

Funny thing, it went the other way eventually. And then some. 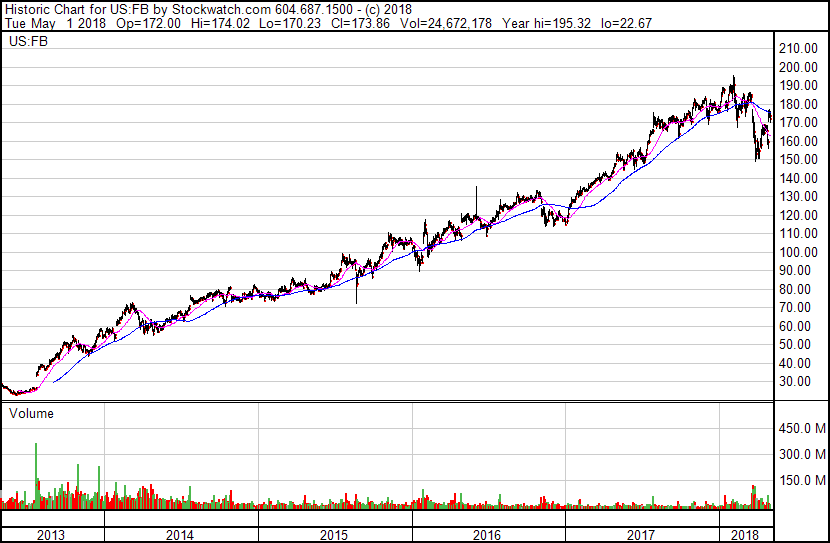 Now, TGOD isn’t Facebook, but it will ring the TSX bell and come live on the markets on Wednesday May 2 with nine figures worth of cash in hand, seven figures worth of square footage under construction, actual real licensed business being done right now, supply deals with one of the bigger LPs in the space, an investment significant enough from that same LP to fill the drawers with dough, the cheapest energy in the space, an exec team that launched both Organigram and Emblem (EMC.V) out of a cannon previously, the thickest wad of pre-listing investors you’ve ever seen, who are all opening their show in profit…

As TGOD readies to come public, investors will surely take note that when Aurora began construction of Aurora Sky in the spring of 2017, ACB stock was about $2.00 per share. Shares rose as high as $15.20 in January (+660%) before their recent consolidation. It certainly begs the question if TGOD will chart a similar path with the building of its cutting-edge facilities and international brand.

Oh, one other thing: When it opens at $3.65, assuming it stays there, it will mean warrants will be in the money, so any upward motion will see more money coming into the company.

So sure, by all means, let me know about how you’re going to short them with your $500 at Qtrade, Tex from Facebook. I’ll be real interested in how you’re going to risk your rent betting that a company like this is going to drop in value when the public has its chance to finally buy in.

UPDATE: Twitter noobs are pointing to TGOD sales numbers and claiming there’s jiggeryfuckery afoot. So let’s see to that.

No sales: TGOD isn’t selling any weed yet. They’re vaulting it until they have enough to maintain supply to any patient/customer going forward. They’re determined not to have shortages that leave customers in the lurch, so no customers are being onboarded until that’s seen to.

Also, they don’t need customers at this point, as they’re going live with $280 million or so in the bank. They won’t be living or dying on $500k in sales of dried flower per quarter.

One person noted that “only 150 sq ft production by end on 2018” – Sure. But Aurora, until recently, ‘only’ had 55k sq ft of production, and a several billion dollar valuation.

Lastly, it’s been noted that the company wrote off its biological assets last quarter. The reason why is noted in its filings – the assets, which were halfway grown when taken down, are to be used for R&D. That’s pretty standard, when you’re dealing with organic products that you want to know are consistent and high quality and going out to be certified organic. In addition, they’re working on developing cannabis-based products, which need to be worked on before launch and require ingredients to do it.

FULL DISCLOSURE: TGOD is an Equity.Guru marketing client, and we got some of that early stock. We’re conflicted up and down, and we’re loving it.