The Green Organic Dutchman (TGOD.V) will IPO on May 2

The most anticipated weed IPO on the planet now has an official start date.

The April 27, 2018 press release announced that The Green Organic Dutchman (TGOD.V) common shares and warrants will begin trading under the trading symbol “TGOD” and “TGOD.WT”, on May 2, 2018.

Aurora Cannabis (ACB.T) will participate in the revised offering on a pro-rata basis.

Each unit consists of one common share and a half-warrant exercisable @ $7.00 per warrant Share, for the next 2 years.

According to Investopedia, “an IPO becomes oversubscribed when the demand for shares exceeds the number of shares issued”.  When this happens, the company can either 1. adjust the price or 2. offer more shares.

We grow “high quality, organic cannabis with sustainable, all-natural principles. TGOD’s products are laboratory tested to ensure patients have access to a standardized, safe and consistent product. TGOD has a funded capacity of 116,000 kg and is building 970,000 sq. ft. of cultivation facilities in Ontario and Quebec.” 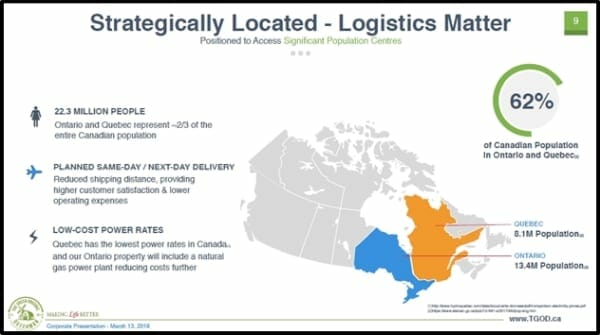 TGOD has developed a strategic partnership with Aurora Cannabis, that made a $55 million investment for a 17.5% stake in TGOD.

To date, the Company has raised approximately $160 million dollars and has over 4,000 shareholders.

The update explained that “The Board of Directors elected to fully fund our entire 116,000 kg expansion” for the following reasons:

Aurora’s strategic investment is important for the following reasons:

TGOD claims that Aurora “not only supplies financial capital”, but is also a world-class provider of human capital, products, and has an international footprint.

Historical context:  Aurora began construction on Aurora Sky in Spring, 2017. The stock price was $2.02. Today, Aurora is trading at about $7.50. As TGOD transitions from a private to a public company, TGOD anticipates a “valuation adjustment more in-line with industry peers.”

TGOD plans to grow weed as “the first ingredient in a variety of higher margin products.” 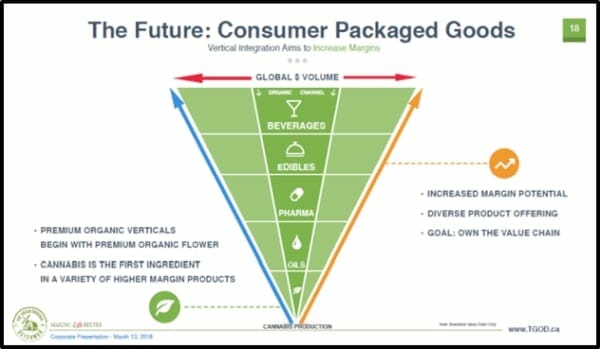 As we recently wrote, “TGOD will be public real soon, with a fat retail investor base of over 4000 holders, with nine figures raised before it goes to market, with a license in hand and a team that has been running on fumes building the biggest, most expectant market debut in the weed space in a long time.

If you got in on that initial raise, the likelihood that you’re going to be riding profits is strong. If you got in a few months back, ditto.”

A recent “Deepdive.ca article” hailed the “pure genius concept of acquiring a large amount of retail investors before even going public. They essentially have 4,000 brand ambassadors free of charge right now.”

Back in February, we alerted you to an opportunity for small (“non-accredited”) investors to participate in a $1.65 round of financing.

“Having brought in 2300 investors on their first round of financing back at the end of last year, there were plenty of folks who figured there was not a lot of dry powder left for them to go for another round.

But another round is exactly what they’ve done, and the result is another 1300 small and medium sized investors are into the thing, in this pre-listing $30 million round.”

If you followed our advice and participated in that $1.65/unit financing, good for you.

Some big players are paying double that now.

TGOD is about to pocket an additional $13 million – and they haven’t even started trading yet.