If you asked me just two weeks ago whether rec weed would ever be legalized in Australia I would have given you my standard answer: “Not in my lifetime.”

Now, I’m being forced to re-think that, and I just might live long enough to witness it happening.

So what has changed?

Firstly there have been some rumblings by the Greens, a political party, trying to get the issue firmly on the political agenda.

“The war on drugs has failed. Governments around the world are realizing that prohibition of cannabis causes more harm than it prevents. It’s time Australia joined them and legalized cannabis for adult use,” Dr Di Natale said.

“We need to get real about cannabis. Almost seven million Australians have tried or used cannabis socially but right now just having a small amount of cannabis in your possession could get you a criminal record.

“Cannabis accounts for most illicit drug arrests across Australia and each year cannabis consumption and arrests are growing.

It’s a plan which would help Australia’s bottom line too.

According to estimates from the Parliamentary Budget Office (PBO), bean counters for the Australian Government, the Greens plan would raise $3.58bn over four years from July 2019, based on a 25% excise, as well as GST.

Here’s the download link to the advice they provided to Di Natale.

Canopy’s mandate – Prepare for the future 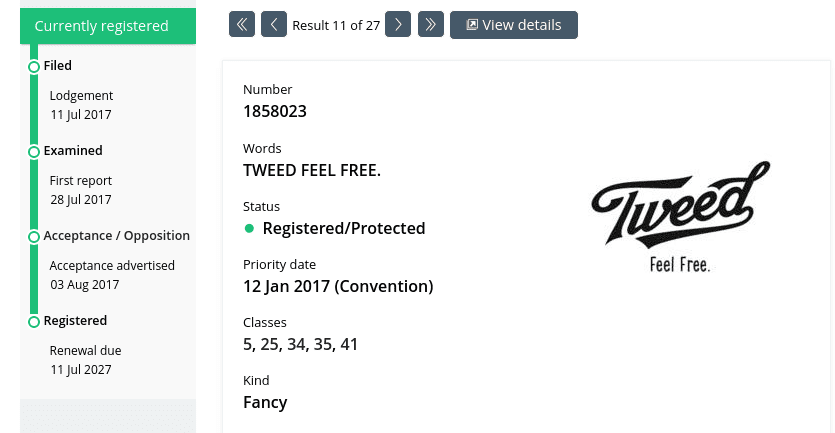 According to the ABC:

Canopy Growth Corporation, a $5.6 billion publicly listed Canadian company, has taken out Australian patents for a range of marijuana products including its global, youth-focused “Tweed — feel free” brand for medicinal and recreational cannabis.

The company has also hired political lobbying and research firm Crosby Textor to help it in discussions with the federal and state governments, following Australia’s decision in 2016 to legalize cannabis for medicinal use.

I intend to watch it in the coming days.

If you’re not in Australia, fear not, as you should be able to see it via iView, although you may need a VPN to do so.

The way Linton sees it, it’s a fait accompli that countries which start down the road of legalizing medicinal cannabis eventually legalize recreational weed.

It would be quite a thing to see it happen in Australia – but then I said the same thing about Same Sex Marriage which got across the line in December last year. (Hooray!)

We’re not there yet

Attitudes towards cannabis use appear to be changing but it’s a slow process. According to data from The Australian Institute of Health and Welfare, most Australians still disapprove of cannabis use. 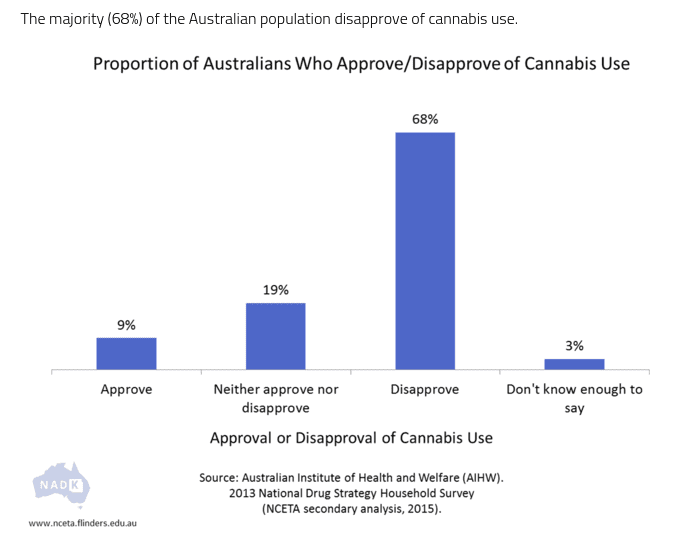 In my twenties, I packed and smoked as many bongs as the next guy while wearing out my vinyl copy of Pink Floyds Dark Side of the Moon.

I’m firmly in the camp of ‘the cops have got better things to do than bust people for dope possession’.

Having said that there is an ice epidemic which is sweeping across Australia causing tremendous damage.

Solving the drug problem will be tricky, but surely legalizing it, regulating and taxing it is a better alternative to leaving in the hands of bikies?

I can’t see anything happening before 2020, but by that stage, the barriers to entry from a commercial perspective will be much higher. The smart players, like Canopy, are getting set now.

The AusCann share price has held up better than most within the weed sector since the November spike.

Factor in the institutional support from Canopy (their largest shareholder) and joining the dots already presented in this piece, I suggest that it’s a ‘no-brainer’ to grab some AC8 while it’s still at these prices. 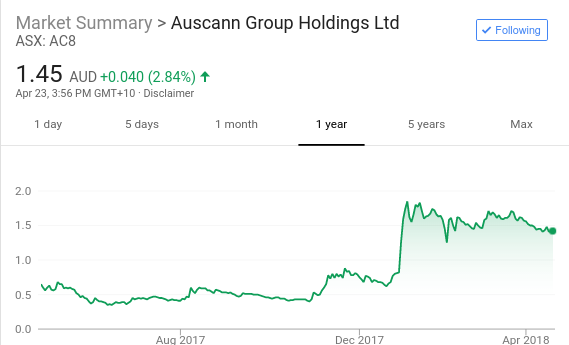 FULL DISCLOSURE: The author holds no positions in either AusCann nor Canopy Growth at this time