When the first blockchain profit party ended last December, and companies that had been on an absolute tear of upward multiples began to turn the wrong way, few in the industry seemed too bothered about it all. Blockchain execs on the public market largely shrugged, some admitting there had been too fast of a run and a turnaround was healthy, others suggesting they could use a breather to get their businesses to catch up to their valuations, others still saying they would be buying on the cheap in preparation for the next charge.

The gap between then and now has been longer than most anticipated, and has revealed some firms in the space as being without a Plan B.

The desire of smallcap investors to get back into the cryptocurrency fray hasn’t been strong, and that’s left many companies that had pegged themselves to the crypto-mining business flailing about, looking for answers as to what to do with all those Antminers/boat anchors.

The winter of blockchain’s discontent may not be over just yet, but it appears the birds are starting to sing.

Here’s Hashchain Technology’s (KASH.C) chart. If you were an Olympic ski jumper, you wouldn’t mind hitting a ramp like this one. 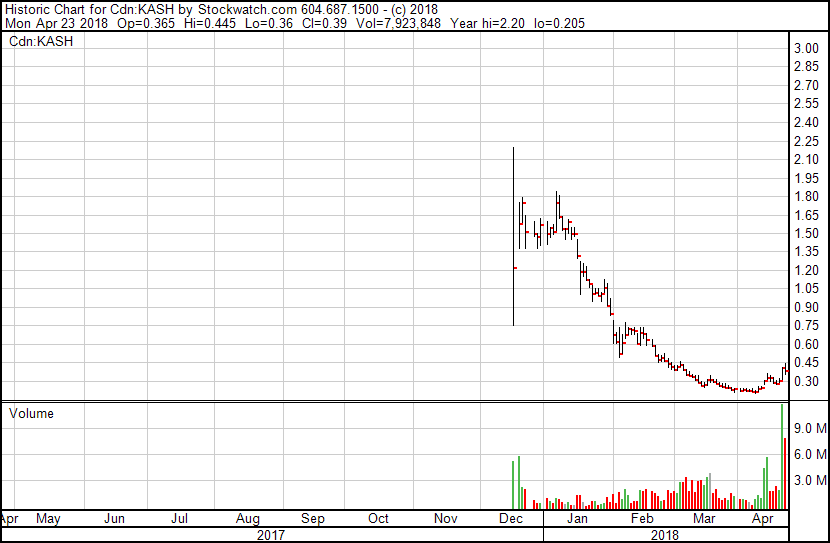 Last Friday (over on the right side of the chart) was a big day for blockchain stocks. Almost everything picked up in price, but the bigger thing to note was the pick up in volume, along the bottom of the chart.

KASH’s volume on Friday, while the stock had a nice up day price-wise, was humongous. The biggest trading day enjoyed by that company in its existence.

Admittedly, it was followed today by the biggest sell-off in its existence.

Alright. That’ll happen. I hold KASH and was tempted to pull the pin on it in the wake of its turnaround day, but didn’t for precisely the same reason I still held it in the first place… I believe it will be doing good business over the next year and will roll up steadily from here.

The initial round of blockchain craziness was inspired partly by opportunity, partly by crypto’s inflated price run, partly by FOMO (Fear Of Missing Out), partly by abject greed, and partly by the transition of our North American junior investing class from weed stocks to tech stocks.

None of those things have gone away. They’ve been lying in wait for round two.

Here’s HIVE Blockchain’s (HIVE.V) chart, which has historically served as a bellwether for the sector. 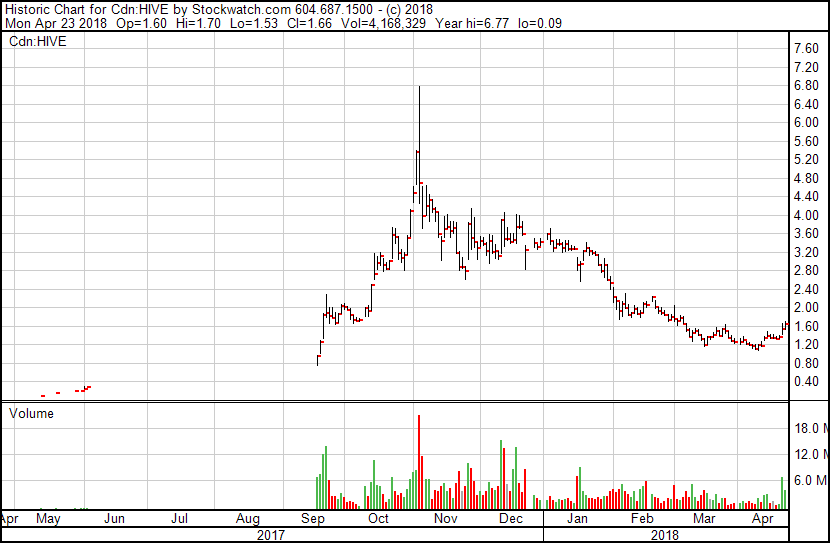 Big spike in trading activity lately, and no accompanying sell-off.

I talked to folks connected to HIVE last week about whether they were putting together ‘life after mining’ plans, and was told “Nope.” The thinking being, they raised money to mine crypto, that’s what the market expects of them, and they’ve no reason not to when they’re getting high margins, market cap be damned.

HIVE’s problem has never been that they can’t make money mining. It’s been that they turned their company into a near-billion-dollar valuation and crypto mining production didn’t (indeed, couldn’t) ramp up as quickly as that valuation did.

But to go from nearly a buck to $1.60 in a few weeks is a nice kick. To trade nearly 10m shares in two days and show nothing but green is a nice sign that the ‘knife catch’ has happened, and we’re shifting into a new and positive cycle for the blockchainers. 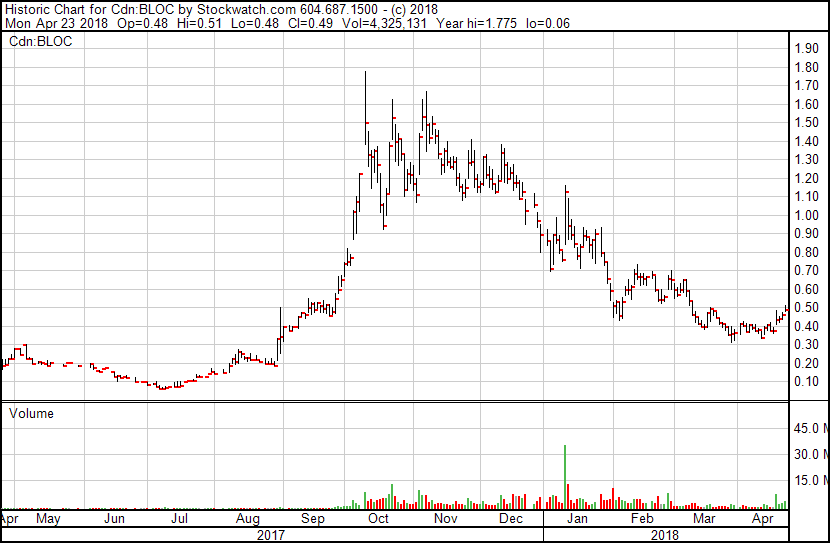 This thing’s been a sea of red since October, and barely rippled through the great mania of 2017, but the last week has seen heavier buying and very little selling.

BLOC put out some interesting news a week ago that started that shift, and may have pegged them as entering the ‘real blockchain business’ market:

Global Blockchain Technologies Corp. is launching a service layer technology called Laser. Laser works by operating on top of any existing blockchain network and optimizes its functions, which include the ability to operate with other blockchains. Laser with these new and unique features seeks to play a central role in the growth of all blockchains for the first time by allowing interoperability between blockchains.

Translated: They may have tech that will allow cryptocurrencies to operate much like existing fiat currencies, in that they can be exchanged for one another in a smooth, efficient way. This means, instead of betting on which one will win, they can all win in a different area and maintain use across the board.

The United Nations officially recognizes 180 currencies worldwide, and outside of reserve currencies, none of these compete with one another for market share, as they each serve their own purpose in their respective jurisdictions. These currencies can easily be transacted across borders and banking systems through systems such as Swift, making most currencies tradable and fungible on a global scale.

BLOC las launched, in essence, the SWIFT of cryptocurrencies.

By standardizing properties such as wallet numbers, it will be possible for users of one blockchain to make transactions with users of another blockchain without the use of a third party exchange. This effectively does away with the borders of the blockchain ecosystem and opens up a vast realm of new possibilities.

Or so they say. Time will tell if that’s a neat news release or a real business with uptake.

Of note, however, is this:

The second feature is the optional joining service to make transactions anonymous in any cryptocurrency. This is accomplished by bundling multiple transactions together and where coins are shuffled and predetermined amounts are disbursed to predetermined recipients. This will obfuscate the ownership history of a given unit of a cryptocurrency, preventing it from being tracked through the blockchain.

This may be a big deal. Currently, if Bank of America decided to do business in crypto, it would need clean (or ‘virgin’) crypto to do it, because they can’t be taking currency that may have been most recently and demonstrably used for proceeds of crime. This is one of the main planks behind HIVE’s business model – that they’ll be able to charge a premium for the Ethereum they’ve mined, because it’s never been used, let alone used for nefarious means.

If BLOC can ‘cleanse’ the record in the same way handing a bank teller a stack of singles cleanses the origins of your money, that’s going to be a big deal going forward.

Finally, Laser will introduce a more efficient derivative of the greatly anticipated Casper protocol even before Ethereum adds it to its blockchain. Casper is unique in the fact that it is based on PoS (proof of stake) as opposed to PoW (proof of work). This has the primary benefit of reducing the amount of energy required to operate a blockchain, reducing both fixed and variable costs, as well as ensuring that the blockchain remains sustainable.

Okay, let’s get our heads around this one because it’s important, and may be the actual reason folks are beginning to buy back in.

Proof of Work (POW) is what crypto miners have been doing since it was a thing. You use your computer resources to verify crypto transactions, you get crypto coin in return.

Proof of Stake (POS) takes away the traditional mining, and grants you permission to verify transactions based on how much coin you already own, with the reward being a percentage of the transaction fees paid.

If BLOC is pointing its divining rods to POS, it’s pointing them in the right direction. And if others are smart enough to wire in their next generation business models into that system early, ditto.

Early ‘knife catching’ investors, meanwhile, are positioning themselves for what they see as the next big run.

I couldn’t get near the execs of Neptune Dash (DASH.V) at the Cantech Letter conference in Toronto earlier this year for all the folks throwing money at them, but they soon hit the same downward drag as everyone else.

Not lately. Their bag? Staking cryptocurrency in the new Proof Of Stake lifestyle.

Who else is involved in this business?

Well, Hashchain, actually. In fact, it’s been a large part of their story recently, while the market largely shrugged.

In October, 2017, Hashchain purchased 1,000 Dash for a total of $280,000 (U.S.). To run a masternode, an investor must have at least 1,000 Dash in their wallet. By running a masternode, Hashchain can participate in voting on Dash initiatives that have a direct influence on the direction of the network. Masternodes allow users of Dash to carry out private transactions. They also enable the Dash network to process transactions instantly, eliminating bottlenecks in the blockchain and providing double-spend-proof capabilities. The Dash network currently rewards masternodes for their services to the network at a rate of 6.6 Dash per month.

And then there’s their new acquisition:

NODE40 is a New York-based blockchain technology company bringing best-in-class tax compliance to cryptocurrency traders globally. The announcement means [any of the 13 million] Coinbase users can use the NODE40 Balance software-as-a-service to accurately calculate their cryptocurrency capital gains and losses, and report to their respective tax authorities for the 2017 financial year, and all prior years.

I know of two public companies that are openly talking about the need for this.

Streamlining fintech and prepping companies for the actual deployment of crypto/blockchain as a means of doing business is gaining interest.

Here’s Upco International (UPCO.C), a fintech/blockchain outfit you probably haven’t heard of, but who jumped 75% today on no news.

Upco has designed a software application for Apple iOS and Android, similar to Skype and WhatsApp. With the forthcoming addition of the Upco e-wallet using blockchain payment services, users will be able to: send invoices, approve payments, transfer international funds, convert international currencies, and track transfers and payments. 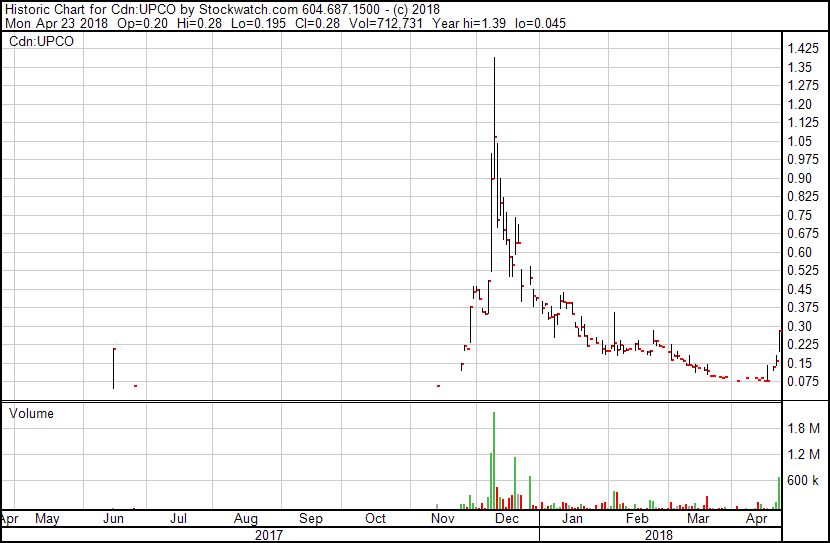 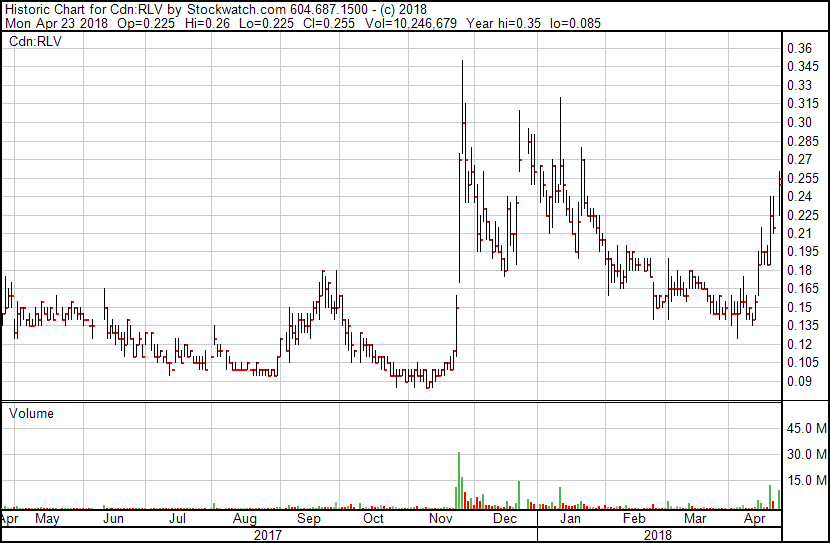 Also working on a cannabis B2B platform is Calyx Ventures (CYX.V), which dropped hard in the blockchain sell-off but has found buoyancy recently on a tiny shred of volume, which speaks to lots of upward potential if it releases positive news at some point. 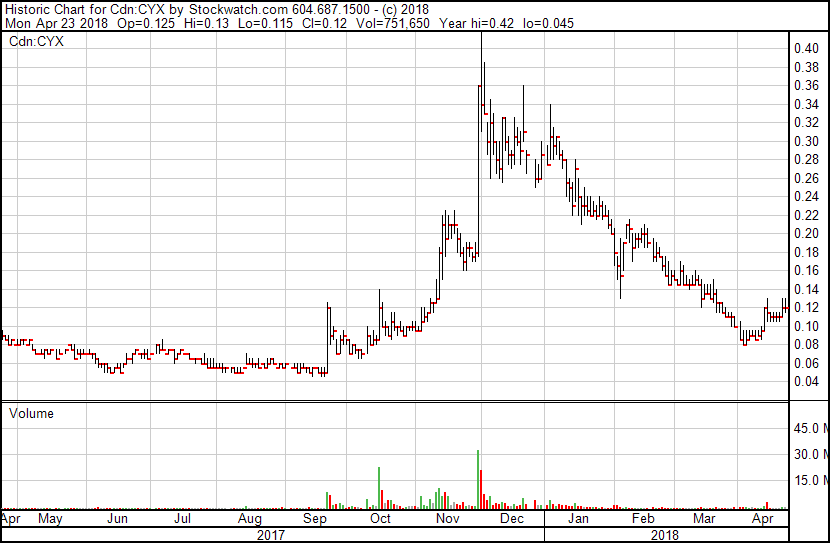 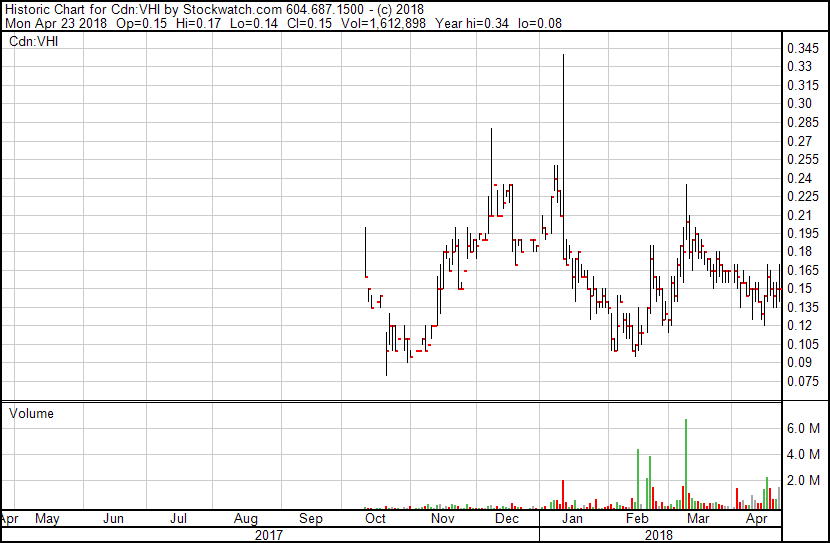 DMG Blockchain Solutions (DMGI.V) is going on a run of its own, perhaps because of their acquisition of this:

Blockseer is a blockchain and artificial intelligence company headquartered in Silicon Valley, Calif. Blockseer has worked with several law enforcement agencies including the U.S. Secret Service, Federal Bureau of Investigation and the Internal Revenue Service, and it also provides Ethereum blockchain data services for Blockchain.info, one of the world’s largest cryptocurrency wallet providers. Blockseer provides data analytics and incorporates artificial intelligence to provide insight into what is happening with digital currencies and blockchains. 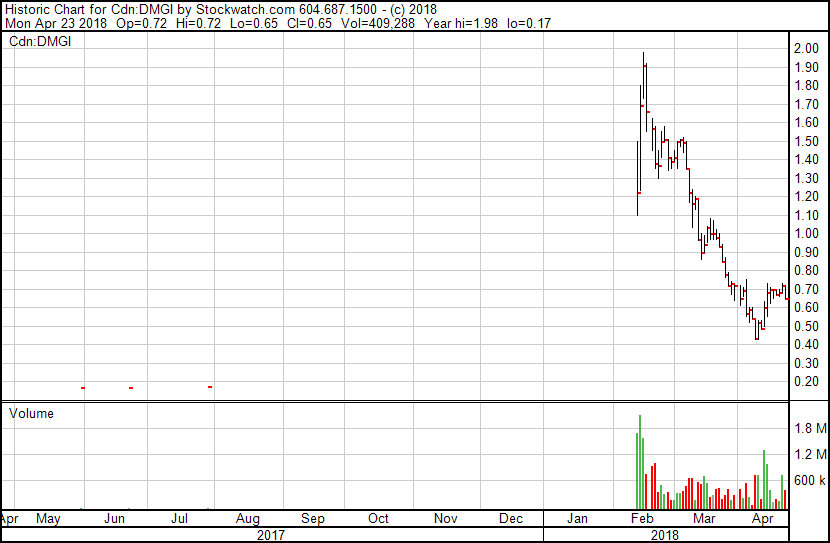 Electronic Warfare Associates Inc. of Ottawa, Ont., and Herndon, Va., is under contract to advise and co-ordinate LeoNovus Inc.’s submission to the National Institute of Standards and Technology in Washington for the company to obtain FIPS 140-2 certification. LeoNovus would become one of the first companies in the world with embedded blockchain technology to receive FIPS 140-2 certification.

The FIPS 140-2 certification will enable LeoNovus to sell its blockchain-hardened software-defined storage solution to the Canadian and American governments and other regulated industries (such as financial and health care institutions) that collect, store, transfer, share and disseminate sensitive but unclassified (SBU) information.

Now, I’ll be the first to suggest that two days of trading does not make a ‘movement’, and that blockchain companies have a long way to go to get back to the fever of ’17.

But these moves are based on what I’m going to call PoB, or Proof of Business.

El grande promise of 2017 was ‘blockchain will change how every industry does everything’, but we then saw no evidence of that actually happening for several months. Now we’re seeing some reality to the statement, and investors are jumping on it.