Blue Sky Uranium (BSK.V) is doing something remarkable in Argentina.

BSK has assembled a massive 434,000-hectare uranium land package in the Rio Negro and Chubut provinces of Argentina.

The area it controls is about 75 X the size of the Manhattan. 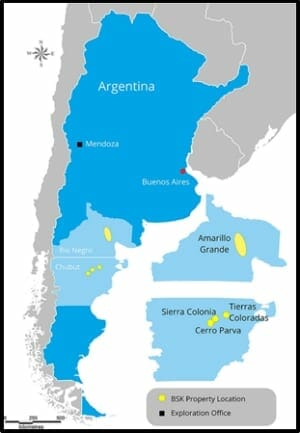 And no – it’s not dangerous.

Like planes, when something goes wrong with nuclear – it’s dramatic – it makes headlines and burns into everyone’s brain.

But judged by the cold metric of human deaths per Kilowatt/hour – nuclear reactors are safer than solar power.

[a tipsy dude in Oregon keeled off his garage roof while installing a solar panel – and skewed the data].

The CEO of Blue Sky, Nikolaos Cacos, recently sat down for an exclusive interview with Equity Guru’s Chris Parry.

“We made a uranium discovery in Argentina which could turn out to be one of the largest uranium discoveries on the planet,” stated Cacos, “We have about 430,000 hectares over two provinces.  We have discovered uranium occurrences along a 140-kilometer trend.”

Cacos stated that they are close to publishing a “maiden resource calculation”, which will allow them to create a model for exploration and extraction which could be applied to the whole trend.

“I do not know the size of the resource today,” Cacos told Parry, “But we have internal corporate minimums of 15 million pounds of U2O8.  We wouldn’t be doing this if we thought we had less.  This amount of uranium is enough to trigger production, given that it’s right at surface, on unconsolidated gravel-like ground.”

The “right-at-surface” is a big deal in mining.

It changes a no-hoper into a robust cash-generator.

A billion-dollar nugget of gold buried at the base of a mountain is useless if you have to spend two billion dollars removing the top of the mountain to get to it. 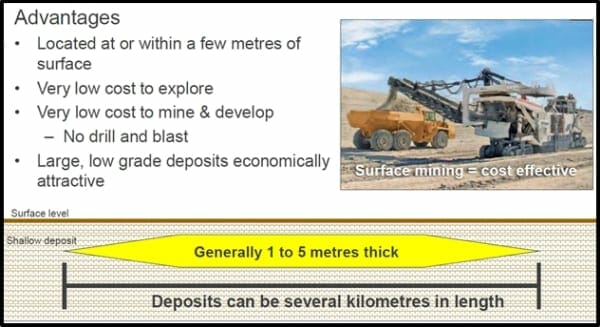 So yes – geology is important.

But so is geography.

The Argentine government has expressed public support for the development of a domestic uranium supply to service its expanding nuclear energy program.

Here’s the skinny on the macro picture:

Blue Sky’s uranium projects were selected in collaboration with Dr. Jorge Berizzo, who was a mine manager, for the Argentinean National Atomic Energy Commission.

“In this province, we have first mover advantage,” confirmed Cacos. “We have 25 years of Argentina mining experience.  All levels of government have been great.  Never had a problem.  We share the wealth with the locals, and we’ve never had issues getting permits.”

There is a subplot here that’s worth mentioning.

Vanadium is used as a steel additive in crankshafts, gears, tools, knives etc.

“These results confirm the regional potential of Amarillo Grande where two significant uranium-vanadium discoveries have been made.”

“We are finding substantial amounts of Vanadium,” Cacos told Parry, “It provides us with – not just a hedge – but a potential economic boost into the value of the work. In some areas, for every pound of uranium, there is 4 or 5 pounds of vanadium.  So we’re reworking the data and we believe there could be a legitimate stand-alone vanadium deposit. “ 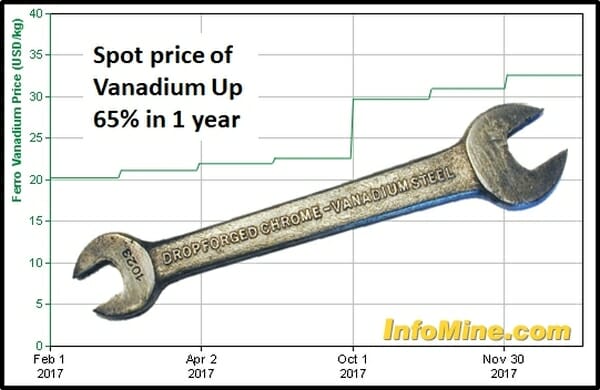 Your local brain surgeon is probably using a vanadium scalpel.

There are also rumblings from China that could catalyze further increases in the spot price of vanadium.

After a series of deadly building collapses, the Standardization Administration for the People’s Republic of China, announced a new rebar standard – requiring the use of vanadium.

“Rebar” is used to give internal structure to poured concrete. You’ve seen it on construction sites. It looks like spaghetti with rigor mortis. 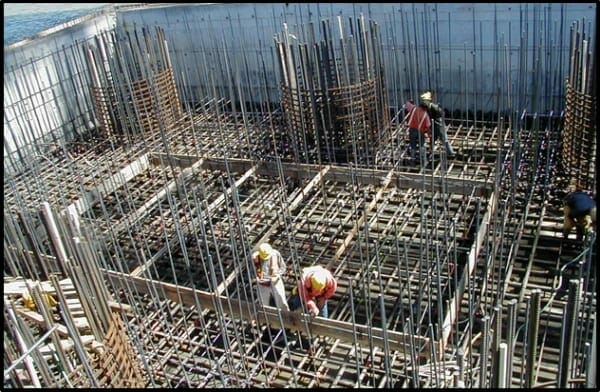 Argentina is one of China’s main trading partners in South America.

$13 billion of goods move between the two countries.

Remember this about Blue Sky.

Uranium is the A-plot.

Vanadium is the kicker.

Keep your eye on this company.  There’s a maiden resource pending.  If those numbers are good, look for an inflow of institutional money.

Then it’s game on.