Cuba Ventures (CUV.C), A web based tech company buys a magazine. Wait, What?

First up Cuba Ventures (CUV.C) is a client. I haven’t seen any news about them pop up since I’ve joined the team. Hell, I hadn’t even heard of them until Friday, except their listing on our masthead. So when their announcement popped up on my feed I did the usual flyby to see if there was anything worth highlighting.

Imagine my shock at a proud investment in a paper magazine, a niche trade magazine no less. In 2018. By a primarily web based technology company. It’s like a mammal buying a stake in dinosaur futures… the evolutionary race is done. (I’ll belabour the analogy for pedants, if you invest in theropods, you could actually realize a good return when they evolve into birds)

So at first blush, this seems nuts. However, — and I can’t believe the dinosaur thing continues to work — Cuba Ventures is actually betting their dinosaur can help them fly like a bird.

Cuba Ventures is on a mission to own the digital Cuban-American experience, and is trying to corner the real world market too. It’s a great niche and if they can dominate it, it will mean serious money.

Cuba has a very special position, compared to other carribean and Latin American countries. Despite the thaw in relations under President Obama, diplomatic and trade issues still complicate direct links with the U.S.A.

This has been going on for a long time, and a very lucrative cottage industry sprang up in Canada to service the US->Canada->Cuba->Canada->US trade route. Much as in a good game of Civilization, Cuban-Canadians could import used american goods and ship them to Cuba. Vacations, money, investments, all had to flow through 3rd parties to get around US sanctions.

This was all very profitable and very ‘gray market’. The upshot is, the Cuban-American market is used to dealing with a broker or middleman instead of doing direct deals with the motherland, as it were.

Cuba Ventures has grabbed that opportunity and run with it. Their hub lets cuban expats in multiple countries book vacations, and events. Located in Canada, the company doesn’t have to worry about the shifting winds of U.S. policy.

Safe to say it’s got it’s digital side locked down. So why jump into dead trees?

Did you see CoCo? Did you cry? I did.

The 2010 US Census claims 1.8 million people identify as Cuban Americans. They represent 3.5% of hispanic folks in the U.S.  960,000 were born in Cuba. Pew research says 1.2 million born in the U.S. – They can argue over their methodology.

The point is, 40-60% of Cuban Americans are 1st generation immigrants and have a passionate love of their home country and the family ties they left behind. Especially the largest cohort in this group, the Boomers. Yep. Them again.

The boomers are the folks who had to flee during the revolution. (See: Godfather II). Their families were often torn apart. They left lives and careers – it was a whole thing, and very traumatic.

So there is a niche of one million people who have a passionate love of their country, are retiring with lots of dough, are used to dealing with Canadian middlemen…. and are the last damned age group that READS MAGAZINES.

The trade magazine business is hanging on by its fingernails because as a business model it still sort of works. Old captains of industry like to flip through them on the executive loo. They are willing to pay for people to gather news on their very narrow range of interests.

With Cuba trade loosening up, the time is ripe for a smart Canadian company to position itself as the people to work with to exploit- er develop the relatively untapped Cuban market. Holding the keys to the gates of the #1 trade magazine is a nice start position.

(tries not to roll eyes…)

But how’s the stock doing?

Not great. The stock i think, reflects their split focus. 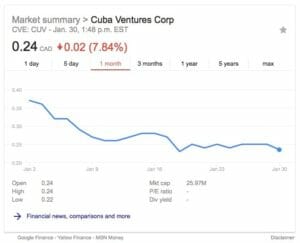 If they focus on capitalizing on their potential for serious domination in this niche they could really get something going here.

I get that cryptocurrency is tailor made for dealing with regimes like Cuba, but I’m not convinced running a crypto and a media empire concurrently is so super smart. Besides with all the hype, is it doing more harm than good to your brand?

I’m going to see where this goes. I hope they’ll pick a lane, and I think the mini-media baron strategy is the way to go. I think it bears watching, but I’d wait to see if this is the first sign of a solid direction because remember, jack of all trades… equals two in the bush.

Feel free to yell at me in the comments.