The sky isn’t falling in the Cannabis sector — but think about taking advantage of the people who think it is.

What a crazy day huh. The news that Jeff Sessions, the great and powerful, will roll marijuana policy back to the pre-Obama days certainly had an impact on the market. Fundamentally, this market is going to see shocks like this fairly regularly.

As the conflict between prohibition and legalization fight it out down south, investors need to be prepared for a back-and-forth. Factor that into your buying because it’s not going away soon.

My colleague has a great piece that goes into depth on the political wrangling but the 10,000 foot summary is: The states who legalize are going to be all over this in court, and may find surprising allies on the Right who support state’s rights. (Y’know, be it stuff like weed, or um, segregation, gun rights, affirmative action…)

Colorado’s US Attorney has already announced he won’t be changing his office’s policy around cannabis enforcement. I wouldn’t be surprised to see most other US Attorneys announcing something similar. Keep an eye on California though.  There will likely be political pressure to crack down on the Golden State as retaliation. (probably not in Rep. Nunes district though).

So we’re looking at a nice storm of craziness. Big selloff in the morning. The plunge triggers alarms and trading halts. People continue to freak out. Dogs and cats living together, mass hysteria. 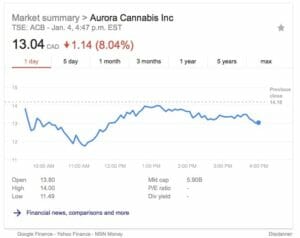 panic..panic…oooh a bargain now… maybe we were wrong…and close.

By the end of the day, a loss of eight per cent. That hurts, but it’s actually inches ACB stock back to sanity. (Not very much, but a little) These crazy cannabis valuations are ripe for selloffs when these outside world events goose the market.

Hey what about their takeover target? 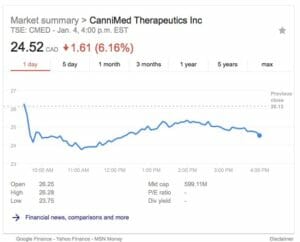 Same pattern, another drop, six per cent this time. The actual dollar figure is higher, but the market cap is smaller and so more wiggle room in the share price.

The stocks here have moved in lock step. This is overall movement in the market – it shouldn’t affect the takeover. Maybe the smaller drop in CMED helps them, but likely its because investors are less likely to sell when there’s a takeover in the wind.

Take a look at this. All of these companies are EG clients, in the Cannabis field. They all have similarities, but do you see what I see?  The companies who primarily market to and service the Canadian market took way less of a hit than the U.S. focused companies.

I know what you are saying – “Duuuuhhh-Doy.” but look at the difference: 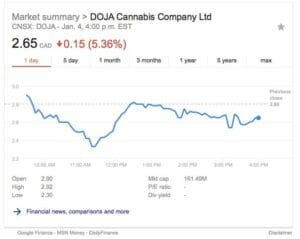 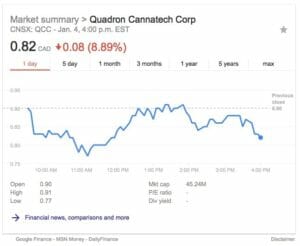 And take a look at this. 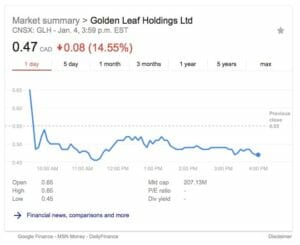 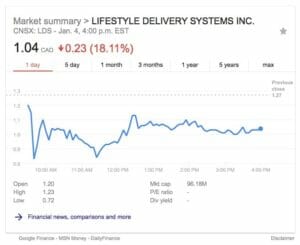 That’s a whopping big multiplier for these companies for operating in the U.S. It also goes back to my initial point about shocks to this market.

Whether its a big shock like a policy rollback or a halt trade or what have you, all of these are endemic and normal for an expanding and developing market. Legal recreational and medicinal cannabis in North America is still bleeding edge, and there’s gonna be more bumps in the road ahead.

Ok, I get it, how do I take advantage.

Oh, this one’s easy. I can tell you around here, we’re buying. Well, I’m not. First I need a raise. (No. -Ed.)  As the frightened fish swim away, time to snap up the bargains they leave behind.

A smart investor is more interested in the quality of a company’s fundamentals. You may be looking for something you can cash out in a buyout. Maybe you think you can pick the General Motors of legal weed. (GM in 1951, not 2018). It doesn’t matter.

If the company is solid, it will survive these market shocks. My philosophy is to find a company I believe in, and meets my strategic investment goals. I can live with the ups and downs, because the value is tied to the enterprise, not the whims of day traders, algorithms and knock-kneed mutual fund managers.

(Not that I have anything against Mutual Fund Managers, some of my best friends….)

Go back and look at QCC above again. This is a company I’ve featured before. I really dig their tech.

Quadron designs, builds and sells extraction and processing equipment for the cannabis market. They primarily sell to the Canadian market, but recently announced their first U.S. sale as well.

I had a fantastic conversation with Rosy Mondin, the CEO this afternoon. She was gracious enough to let me bend her ear about today’s developments and where she sees her company fit in.

“Being based in Canada gives us the opportunity to breathe under the certainty of national regulation, we are ready to take advantage of the blossoming Canadian market now, and when things settle down a little in the U.S. we’ll be ready to exoand our presence.”

“Basically, we get a head-start on our U.S. competiton.  As they fight out this mess, we’re happily servicing our customers and building units.” – Rosy Mondin, CEO – Quadron Cannatech

Quadron is the kind of company in a great position. It’s Canadian pedigree and client list insulates it from the volatility of the shit-storm in the U.S. but it also has a lot of room to grow once things calm down.

During our call, she also intimated strongly there would be some major announcements in 2018. When pressed she clammed up. I smell R&D money though and I may have heard her mutter something about diversification.

U.S. companies can be sexy propositions. With an immense market and an economic engine that puts everyone else to shame, it’s hard not to see $$ when thinking about them. The comparable risk is also higher.

Because the forces push-pulling at this issue aren’t going to go away soon, U.S. companies will continue to give you intermittent heart palpitations in this market. If you can stand the heat, the potential for even bigger bargains is right there.

If you just can’t handle the occasional 20 percent swing, look a little closer at the fish swimming in our northern ponds. They have the potential to survive and thrive, and could be headed south too, one day.

FULL DISCLOSURE: DOJA, QCC, GLH, LIFESTYLE are all EG clients. I do not own stock in any of them. I would like to. Please send all gifts to Stock for Steph ℅ Editor, Equity Guru.