Bitcoin miner (KASH.V) leaps out of the blocks

HashChain is focused on mining Dash and Bitcoin cryptocurrencies. The Company is currently operating 100 Dash mining rigs and it has purchased an additional 770 Bitcoin rigs which should be up and running by January 2018

According to Coinmarketcap, the Cryptocurrency market reached a market cap of $500 billion in December 2017.

Is every “blockchain company” legitimate?

HashChain’s corporate presentation cites some of its competitors, along with their market cap on November 21, 2017 – about three weeks ago.  Since then three of the companies have gone up in value, and three have gone down.

So the waters are churning and novice paddlers should proceed with caution. 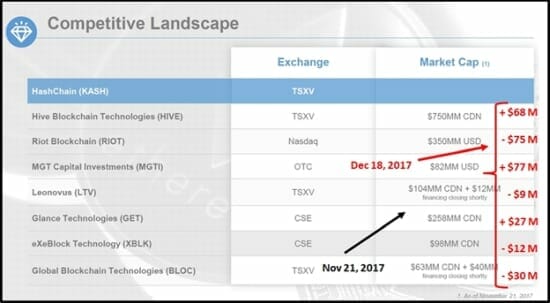 HashChain has raised $4.4 million to date with, 41 million common shares issued and outstanding.  With all 870 rigs in full operation, HashChain’s energy consumption is projected at 1.2 megawatts –about the same as of 900 modern houses.

If that sounds like a lot of power, that’s because it is. We covered this aspect of Bitcoin in detail just a few days ago.

According to the The Guardian, Bitcoin mining chews up more electricity in a year than Ireland, The estimated power use of the bitcoin network, is 30.14TWh a year, which exceeds that of 19 other European countries. 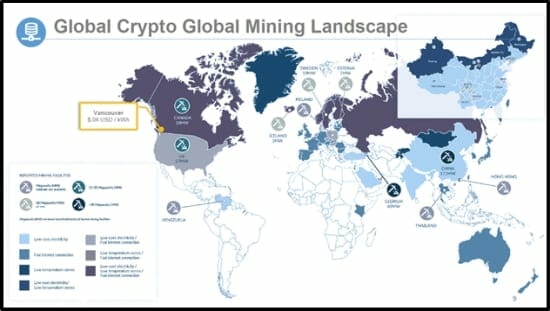 HashChain has also acquired a Dash Masternode for about USD $280,000 which requires a collateral investment of 1,000 Dash coins.

Based on current prices as of December 15, 2017, the Masternode investment is worth approximately USD $880,000. By holding this investment, Hashchain receives the right to participate in budget funding decisions for the Dash network while also receiving a return on investment in the form of virgin coins and currency appreciation. 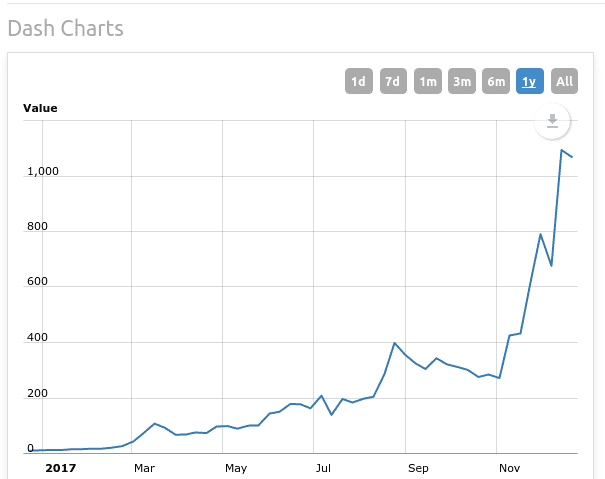 In a news update, HashChain warns: “The price of Dash has increased by approximately 9,200% in 12 months. Due to the volatility of the price of Dash, there can be no assurance that the value of Dash will be maintained or increase.”

HashChain’s team is led by CEO Patrick Gray who is “a Certified Blockchain Expert recognized by the Blockchain Council, who has published articles on blockchain technology”.

Gray, sold his first tech start-up to Xerox for $220 million, and later became the youngest executive in Xerox’s history, leading a team of 35 developers in the Xerox Litigation Services division.

He is also the founder of sCube – a niche IT Service provider with over 120 employees that focuses on E-Discovery, E-Licensing, Application Development and IOT.

Other key personnel include:

Nitin Kaushal, Chairman of the Board of HashChain and currently serves as Managing Director, Corporate Finance at PwC Canada.

Zyshan Kaba, Director acts as legal counsel to companies in the blockchain and cryptocurrency industry.

At Equity Guru, we’ve spent some time talking to the management of HashChain.  One the things we like about the company is the clarity of vision.  They know exactly what they are doing and how they are going to do it. 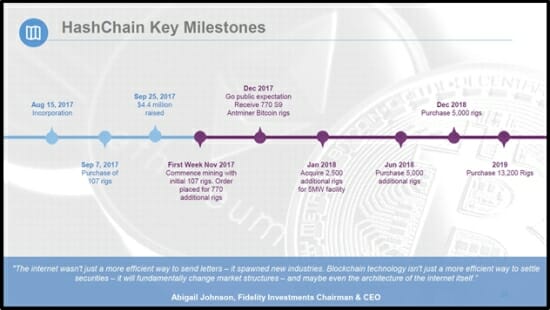 HashChain is on-trend, and the 1st day of trading suggests that we are not the only party that believes in these people, and this business model.