Is UBI Blockchain Internet Ltd (OTCBB.UBIA) the BRE-X of IoT? 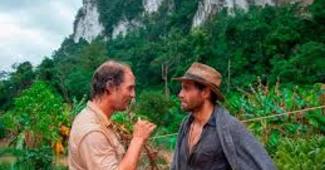 It’s the story that has it all: An exotic location, a missing (presumed dead) geologist, the vaporization of 6 billion in shareholder funds and a CEO who died in mysterious circumstances.

If you’ve been hanging around financial markets for a while, the name BRE-X will be instantly recognizable.

Readers already familiar with the scandal might want to skip this part.

Back in 1995, the Calgary based company (founded by David Walsh) executed one of the biggest gold frauds of all time which transformed the then penny stock into a CAD $6.6 Billion behemoth at its peak.

Owning a jungle stake near the Busang River in Kalimantan, Indonesia, Bre-X claimed to be sitting on approximately 71 million troy ounces of gold, but there was one small problem: the core samples had been salted1.

Cue failed takeovers by the big boys (Barrick Gold, Placer Dome and Freeport) and the involvement of the Indonesian government to make sure they didn’t miss out on the filthy lucre.

Then the story got weird.

Geologist Michael de Guzman was allegedly thrown from a helicopter, his corpse later found missing the hands and feet, and with the penis “surgically removed”.

Even after a decade, the question occasionally surfaces. Do you think de Guzman might still be alive?

“The collective mindset was that this was a wonderful discovery, and anything that contradicted this belief could be somehow rationalized or explained away, including the company’s geologist falling out of a helicopter,” says Margot Naudie, a money manager with Jones Heward in Toronto, and an early Bre-X supporter. “After a certain point, the stock became harder to avoid than to invest in, and no one was even willing to look at the risks.”

“Harder to avoid than to invest in” – sound familiar?

Then the story got weirder.

Remember Walsh, who founded the company?

Two masked gunmen broke into his home in the Bahamas in 1998 demanding his money and he died of a brain aneurysm shortly thereafter.

When the dust settled (did it ever?) some big names had lost fortunes, including the Ontario Teachers Pension Plan, who dropped $100 million. Grade that as an F – surely a lesson to be learned, there.

McConaughey was never going to trouble the Academy when the story finally found its way to the big screen (Gold) in 2017.

Here at Equity Guru we enjoy water-cooler talk as much as everyone else, and our #marketchat Slack channel was working overtime last week with the stock ticker $OTCBB.UBIA.

Had anyone heard of UBI Blockchain Internet Limited? What did they do and what was behind the meteoric rise in the company’s securities? 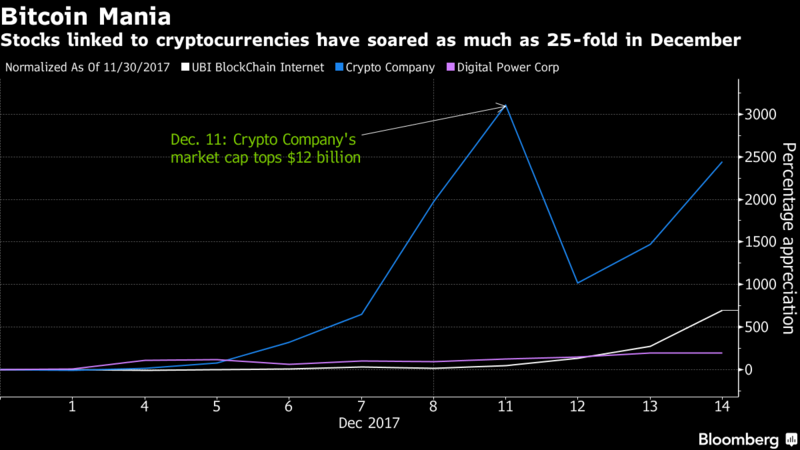 But folks are trading it and the price is moving. Really moving. 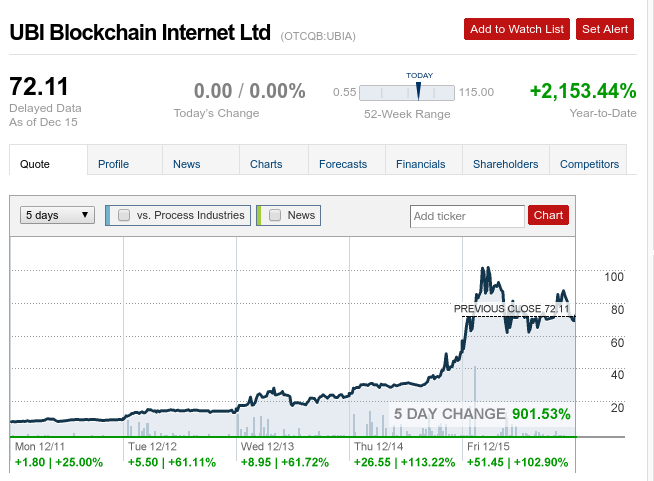 How are those gold stocks looking?

Have we entered the pets.com phase of Blockchain hype?

It would seem so. 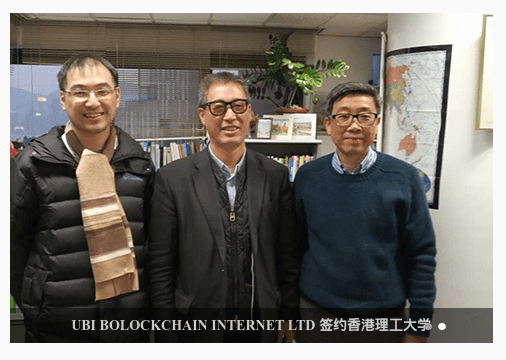 UBI BOLOCKCHAIN (sic) – A Freudian slip perhaps?2
Surely a company capitalized at $2.7 billion has some mojo behind it right? With 18 full-time employees – 8 engaged in product development and the remaining 10 left to run everything else, we assume they’re working on something. Some sort of secret sauce which will transform the business from Zero to One.

Blockchain meets IoT is a lofty goal. Do these guys have the right stuff?

The quarterly 10-Q report is a long-winded affair, peppered with plans and intentions.

But it also contained the first red flag (p25) indicating, just maybe, something was afoot at the Circle K.

• During the six month period ended February 28, 2017, the Company had no revenues.

Well versed in using 1000 words when 100 would do, the company’s vision is unveiled.

The Company will leverage the stock market to build a new business technology platform, specialized in the safety and freshness keeping of food and drugs within the context of micro and macro environment of the human life.

What the fuck does that mean? Will your fridge start talking to other fridges on the blockchain to ensure the Stilton is still safe to eat?

Were it not for InsiderFinancial, we wouldn’t know a great deal about this company. Back on May 26, Chris Sandburg distilled the salient points into a well-written post titled “UBI Blockchain Internet Ltd (OTCBB:UBIA): A Short And A Long Term Thesis”

As of this month onwards, the company is attempting to apply the principles, and the underpinning technology, of the blockchain to the healthcare space in China. Further, it’s, and we are quoting here, attempting to do this against a backdrop of the Internet of things. Now, that seems pretty vague, and it is. There is not too much information available as to exactly how the company plans to tie all these inputs together into something that can generate revenue, but there are clues in recent filings.

According to Sandburg, “the company intends to set up a technology platform through which consumers can track food and healthcare products from source to customer, and it intends to base this platform on the blockchain.”

We cant muster much enthusiasm for UBIA and disagree with Sanberg’s assessment of it being “an interesting concept and one with a large potential reward”. The article was written back in May and, if anything, it’s a far riskier play now.

A website? Yes, in Chinese (http://www.globalubi.com/ – developed at a cost of $92,000), lists the company address which we’re pretty sure is a serviced office in Pok Fu Lam, Hong Kong.

It’s a page turner, but no need to read until the end. All the good stuff is on page 14. It’s worth leaving it capitalized, as it appears in the report. Trust us.

In their own words they say the following:

WE MAY NOT BE ABLE TO ATTAIN PROFITABILITY WITHOUT ADDITIONAL FUNDING, WHICH MAY BE UNAVAILABLE TO US.

So the banks aren’t interested then? Can’t really blame ’em now can you?

BASED ON OUR BURN RATE, IF WE ARE UNABLE TO OBTAIN ADDITIONAL FUNDING OUR BUSINESS WILL FAIL AND OUR SHARES MAY BE WORTHLESS.

Rarely do companies tell the truth. These guys need a little help on the PR side. Any takers?

Spin it into something boys.

1. Salting is the process of adding gold or silver to an ore sample to change the value of the ore with intent to deceive – Wikipedia

2. Photo sourced from company website – http://www.globalubi.com/
per Wikipedia: [“Bollocks” /ˈbɒləks/ is a word of Middle English origin, meaning “testicles”. The word is often used figuratively in colloquial British English and Hiberno-English as a noun to mean “nonsense”, an expletive following a minor accident or misfortune, or an adjective to mean “poor quality” or “useless”.] 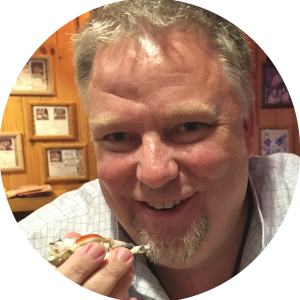