On December 12, 2017 ABcann Global Corporation (ABCN.V) announced that it has entered into an Letter of Intent (LOI) to acquire Harvest Medicine (HMED) – combining “the high-quality, precision growing focus of ABcann with the high-quality, customized patient focus of HMED.”

“This acquisition will be immediately accretive to our shareholders,” stated Barry Fishman, ABcann’s CEO. “Their professional, patient-focused approach is aligned with ABcann’s philosophy of quality and innovation.”

ABcann has just acquired a company with a large, hungry, growing, existing customer base. 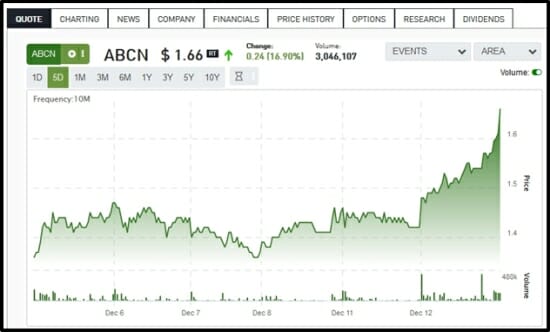 If HMED achieves certain performance milestones, which include patient, revenue and profitability metrics – ABcann will make additional payments in the form of cash or ABcann Shares.

We first covered ABcann on April 26, 2017 – shortly before the company went public:

In the medical marijuana space, when licensed producers get together to talk about who has the highest quality product, Abcann Medicinals (which will go public in the PDA.H shell) is never outside the conversation.

Since then, ABcann has been on a tear, doubling in price over the last three months: 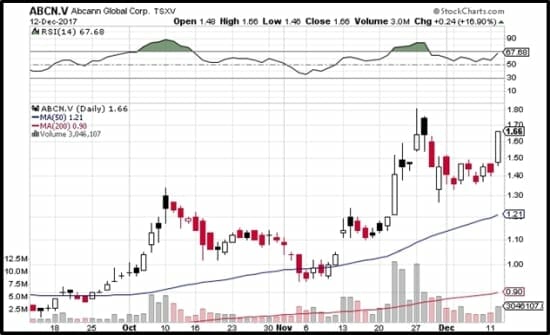 Harvest Medicine has gained 8,500 active patients in less than a year and is adding over 1,200 new patients a month, from a single location. HMED intents to expand and scale its clinical operations.

ABcann’s recent Financial and Operational Highlights from Q3/17 revealed a cash position of over $43 million and revenues of $614,000 for the nine months ended September 30, 2017 – compared to $211,000 in the comparable prior year period. 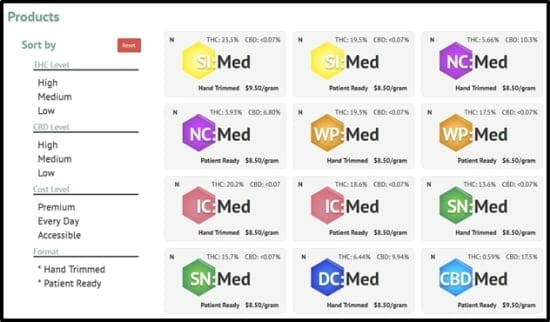 “ABcann’s vision is to create a successful long-term business,” stated ABcann CEO and director, Barry Fishman, “Our management team is working diligently to establish a strategic plan that will provide a roadmap for the Company’s long-term success in the fast-growing global cannabis industry.”

ABcann harvests a lot of very good cannabis – using proprietary techniques to maximize quality and consistency. ABcann’s agricultural technology is one of its key differentiators.

ABcann plans to radically expand its cultivation capacity domestically, as well as in international markets, such as Germany, Australia and Israel.

The single biggest catalyst to company valuation is the 2018 expansion of the high-tech Vanluven facility to 30,000 square feet. 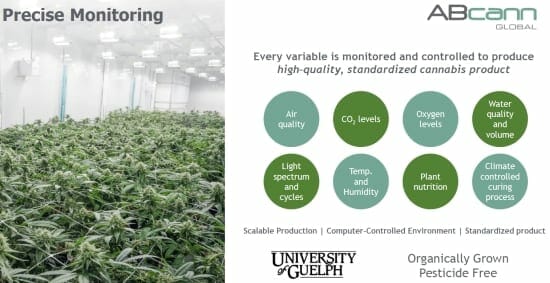 In a November 1, 2017 article, we wrote that ABCN has the DNA of a pharmaceutical company. This followed the appointment of Paul Lucas as Chair of its Board. Mr Lucas is the former CEO of GlaxoSmithKline (GSK.NYSE) Canada (1994-2012).

GSK is an $85 billion company with a portfolio of respiratory, pain relief, HIV and infectious diseases medications.  The company sells about 2,000,000 vaccine doses per day in 160 countries.  GSK has 90,000 employees, $40 billion in annual revenue, $6 billion cash, and a “Return on Investment” of 64%.

So yes – Paul Lucas is a big hire.

According the Harvard Business Review (HBR), the Chairman of the Board can play a significant role in the guiding a company.  HBR argues that boards should be “strong, high-functioning work groups whose members trust and challenge one another.”

Effective boards require their members to play a variety of roles, in some cases dipping deep into the details of a particular business, in others playing the devil’s advocate, in still others serving as the project manager.

Paul Lucas is not a “Yes Man”.

Neither is Barry Fishman.

We predict this partnership will reap dividends.

1. Deploying an operating model that achieves competitive margins
2. recruiting and retaining top talent to ensure flawless execution of the business plan
3. Building a strong patient base

The fundamentals are sound.

Full Disclosure:  ABcann is an Equity Guru marketing client.  We also own stock.