Tinley Beverage (TNY.C) to benefit as Trumpsters turn to pot

According to a recent Gallup poll 64% of Americans support marijuana legalization. The pro-pot contingent has doubled in the last 15 years.

But here’s the real jolt: a majority of Republicans now support legal cannabis.

“Democrats and independents have historically been much more likely than Republicans to say marijuana should be legalized,” stated the Gallup report, “In 2009, Democrats were the first partisan group to see majority support for legalization, followed by independents in 2010. This year for the first time, a majority of Republicans (51%) express support for legalizing marijuana.”

The cause of the softening attitude from conservatives?

There’s a new monster in town: its name is opioids.

In the last 15 years, 500,000 people died of drug overdoses, the majority of it coming from opioids. 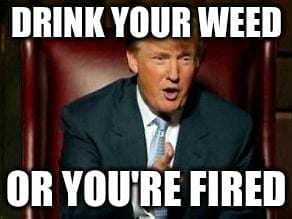 No “dried leaf”, no “vape pens”, no “cannabis-infused-peanut butter” – Tinley’s focus is to take an already habituated behavior (consuming beverages) and merge it into the frontier cannabis industry.

Tinley’s other product, Hemplify, is a non-THC health drink containing hemp stalk, terpenes, essential oils, and other non-psychoactive constituents.  The product is sugar-free, vegan, non-GMO, gluten-free and is jammed with Vitamins C, D and B12), Omegas and electrolytes.

On October 25, 2017, Tinley (finally) released an operational update, announcing that Hemplify, “is currently being set up for shelf placement at a 14-store premium grocer, representing the Company’s largest customer to date.”

“The chain offers a line of CBD products in locations in Los Angeles and throughout Southern California,” stated the press release, “The Company has also placed Hemplify in a 4-location natural grocery store and café chain, as well as in numerous independent grocers and convenience stores throughout Los Angeles and Orange Counties.”

Who is the “Premium grocer”? 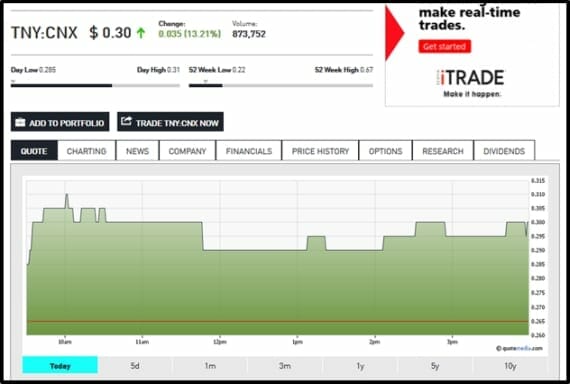 Tinley has also begun a trial with a Texas distributor, representing the Company’s first “bricks and mortar” distribution outside California.

Tinley has wisely delayed the launch of its cannabis beverage line to incorporate “terpene technology that enables users to enjoy an uplifting, Sativa-like effect.”

According to leafscience.com, “The high from Sativa strains is energizing, cerebral and well suited for daytime use. A feeling of well-being and ease is often associated with Sativas, making them ideal for social situations.”

“The revised formulations now enable Tinley’s consumers to enjoy an experience that more closely resembles the social and psychoactive effects of alcoholic beverages,” stated the press release, “The technology has been successfully incorporated into Tinley’s latest formulations, and the Company remains confident that it will go into production in the coming weeks, such that its cannabis beverages will be in full circulation well in advance of California’s adult-use legalization on January 1, 2018.”

Reading between the lines, this suggests that Tinley is razor focussed on delivering the best possible high.

Included in the operational update was information about a “long-term bottling facility”. 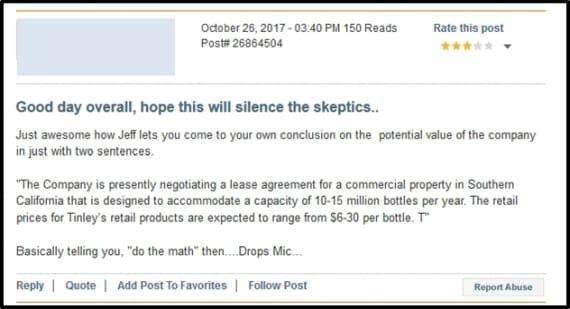 In 1998 DEA judge Francis Young stated that “A smoker would theoretically have to consume nearly 1,500 pounds of marijuana within about fifteen minutes to induce a lethal response.”

Tinley stock price has risen about 400% since the the day we started talking about them.

“We believe that de-alcoholized drinks are a game-changer. Nobody enjoys someone busting out a joint at dinner, but now you could enjoy a drink with your friends and get a comfortable high instead of getting your drunk on.” – Tinley boss Jeff Maser

Amidst the opioid crisis, fretting about cannabis is like scheduling a pedicure after you’ve been stabbed through the heart.

The times, they are A changin’.