Invictus MD (IMH.V) gears up for the end of prohibition

In my youth, I exited a Main street bar and made a fateful decision to take a shortcut home through a construction site. Sixty seconds later I was stopped by a police officer who searched me meticulously – uncovering a gram of marijuana hidden in my left sock.

I spent the night in the Vancouver City Jail and was later convicted of “possession of a narcotic”.

For Canadians like me, July 1, 2018 has a special resonance.  On that date, The Cannabis Act will provide a legal framework for the sale and possession of cannabis across Canada.

But it’s not just cannabis criminals who are enthused about the change.

Uber-conservative Canadian Venture capitalist and TV personality Kevin O’Leary mused that it was like “getting an opportunity to get into alcohol after Prohibition just ended.”

Since the election of Canada’s cannabis-friendly Prime Minister Justin Trudeau, the investment community’s attitude to the pot business has been vacillating between excitement and skepticism.

Recently, the pendulum has been swinging back towards excitement.

Each of our client companies has a unique differentiator.  Today we are going to talk about a company that is strategically positioned to benefit from the frontier recreational market.

Invictus MD (IMH.V) is focused on two main verticals within the Canadian cannabis sector: 1.  Licensed Producers under the ACMPR, 2. Fertilizer and Nutrients.

On Sept. 28, 2017 Invictus MD released a summary of its financial and operational progress.

“The company has minimal debt and working capital of $30.75 million,” stated Dan Kriznic, Chairman & CEO, of Invictus MD, “The approximate $28 million cash in the treasury has been reserved to expand its canopy footprint on its 250 acres of property and produce 15,000 kg per annum making it one of the top producers under the ACMPR.” 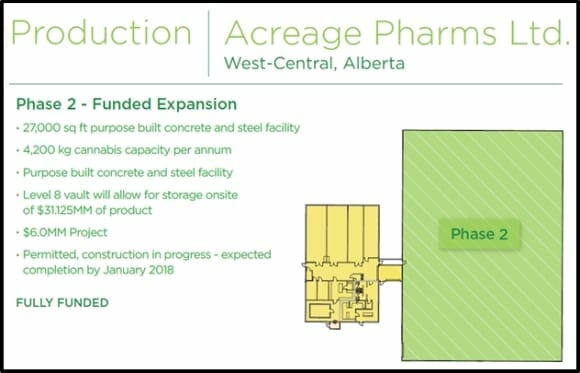 The Acreage Pharms Phase 2 exterior should be completed by the first part of November 2017 and the interior completed a few months later.  The new facility will house nine, 1,600 square foot flowering rooms – creating “a fully controlled and optimized environment” that produces one harvest every two weeks.

As this investment space matures, the question is shifting from: “Can you grow pot?” to “How much can you grow?” and “How cheaply can you grow it?”

Beginning February 2018 Acreage Pharms will have a production run rate of about 5,000 kilograms of cannabis a year.

Electricity for the West-Central Alberta facility is being achieved at 2.8 cents per kilowatt, which is one of the lowest rates in Canada.

IMH will be disposing of water utilizing a septic tank and drain field at close to zero cost. These factors will allow Acreage Pharms to produce low cost, high-quality cannabis.

Invictus is three years old.  Since the day it was born, it’s been growing like a weed.

A decade ago, I was denied entry to the US because of my Canadian cannabis charge.

Now, every 5 years I have to apply for an I-192 waiver for “permission to enter the US as a Non-immigrant”.  It costs $700, and I have to write a cover letter explaining my efforts to “rehabilitate my character”.

But the weed business will.

Fortunes will be made by investors who can anticipate this change – and make good decisions on how to play it.

We advise you to keep Invictus MD on your radar.

Full Disclosure:  Invictus MD is an Equity Guru marketing client.  We think they are going to play a big role, feeding the medicinal and recreational market.