It’s been said that Aussies and Canadians have the same sense of humor (and a common enemy).

While BC residents recently sweltered through a heat wave of 30 degrees celcius (Aussies would barely crack a sweat), so too is Oz now enduring a winter that Canadians would shrug off as an autumnal breeze.

Ask an Aussie what a snow shovel or a block heater is and you’ll draw a blank stare.

It seems that ASX weed stocks have taken the cooler weather as a sign to enter hibernation as we wait for the next batch of news that might awaken them from their slumber.

As outlined in our initial piece on the sector, we predicted a lag time for companies to acquire the necessary permits to hang their shingles on – and we seem to be at that stage now.

Game of Thrones in Canberra

For the unschooled, Canberra is the capital city of Australia. Located in its own territory (ACT), and wholly surrounded by New South Wales, it was strategically placed inland to thwart attacks from enemy forces. Such as Muggles and Changelings.

It’s a busy place through the week when parliament is sitting, as the politicians are essentially FIFO (Fly-In-Fly-Out) workers. They arrive early in the week, nut-out a few pieces of legislation while wining and dining their colleagues and then escape back to their harbourside mansions on Friday so as to claim their fat living away from home allowance. Nice work if you can get it.

After the scramble to catch the last flights out on a Friday evening the city becomes a ghost town, allowing tourists a chance to grab a reasonably priced room over the weekend while they take in the sights.

The War Memorial, National Gallery, Parliament House are all worth a visit, while the kids will love Cockington Green, a miniaturized village. For you bigger kids there are some decent brew pubs located around the traps as well.

They say you don’t want to know how sausages or laws are made, and that might be true! Every now and then, however, the process works as it’s supposed to, and something good comes our way.

Such was the case recently when The Greens joined forces with One Nation and Labour to put medical cannabis on the Therapeutic Goods Administration’s Category A list.

Source: smh.com.au
That’s great news for folks in genuine need of cannabis oil, like this family from Perth, WA, who are forced to travel to the US to procure it for their daughter.

Blackmores (BKL.AX) ain’t no penny stock. They are a constituent of the ASX 200 index, the biggest 200 companies on the ASX by market capitalisation.

With its share price sitting at a hefty 95 bucks (not cents!) it was the market-darling back in 2015 as it took shareholders on a ride from 40 up to 200 smackeroos in a matter of months.

“A year ago, shares in Blackmores were trading at $31.60. Today it’s the most expensive share on the Australian market”

This was largely on the back of a Chinese-themed baby formula mania whereby any company announcing that it was supplying the Chinese market with the white gold had a few booster rockets fitted to its chassis for a quick trip into the stratosphere.

Several milk-contamination scandals, including one that involved the hospitalization of 54,000 children in 2008, have made many Chinese suspicious of their food supply.

Thus Chinese tourists were buying up as much infant formula as they could fit in their oversized suitcases and shipping it back to Beijing where they could sell it for fistfuls of Renminbi.

Not to be left out, budding Aussie entrepreneurs were scooping up leftover supply at the local supermarkets by the pallet-load and flogging it on Ebay for 100 bucks a tin (retail around AUD 25).

In turn, this created a gray market in Australia, a classic case study in Chaos Theory.

This didn’t sit too well with the soccer moms who actually had toddlers to feed. Supermarkets were forced to limit the number of tins sold. 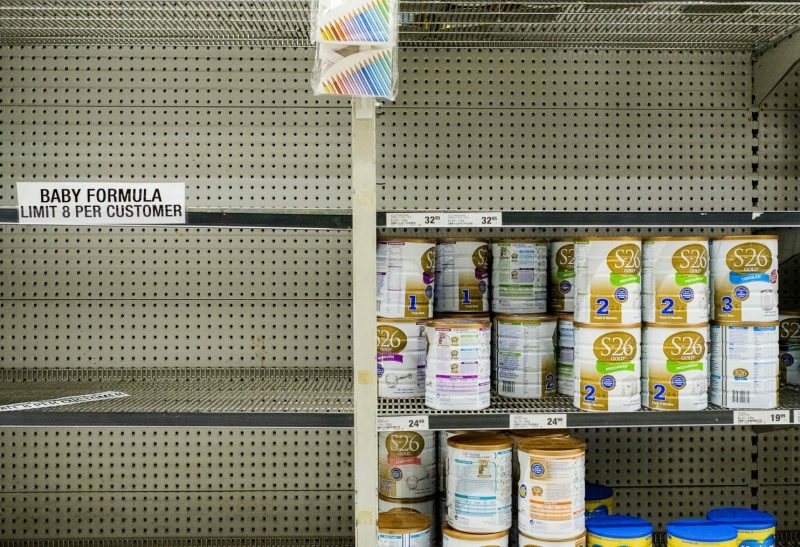 That was then, this is now. The BKL share price isn’t likely to see those lofty heights again anytime soon

Ok so let’s take a look at the 5 year chart. Always good to step back and gain a proper perspective. 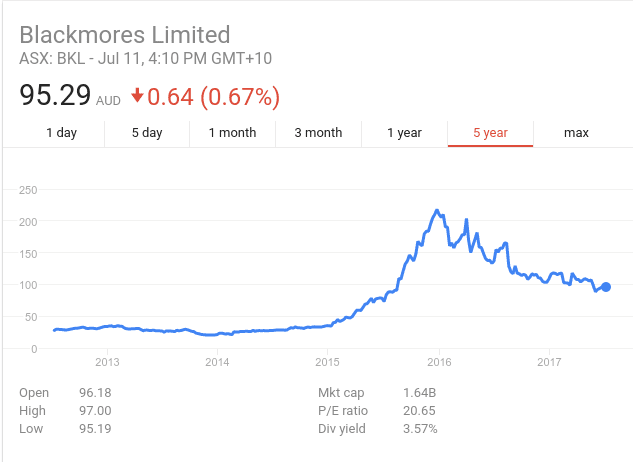 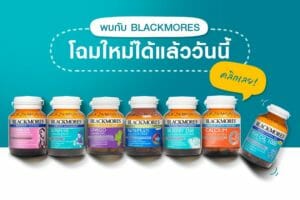 While there’s little capital gain to be had (relatively) in investing in such a high-priced issue, it does lend some legitimacy to the sector overall that such a heavy-hitter has announced its intentions to go after a piece of the CBD pie.

One thing that BKL already have in spades is brand recognition, with their vitamin and supplement pills stocked in pharmacies throughout the country.

The company is also in the midst of an aggressive push into Asian markets, including Thailand.

When we last reviewed the sector, all the names had taken a hit to some degree, and we argued that this represented a good buying level to establish a position in the market.

There was one stock, Medlab Clinical (MDC.AX), which held up better than most. Why were MDC sellers largely absent during the recent swoon that hit the weed sector? It warrants further inspection, so let’s take a closer look now. 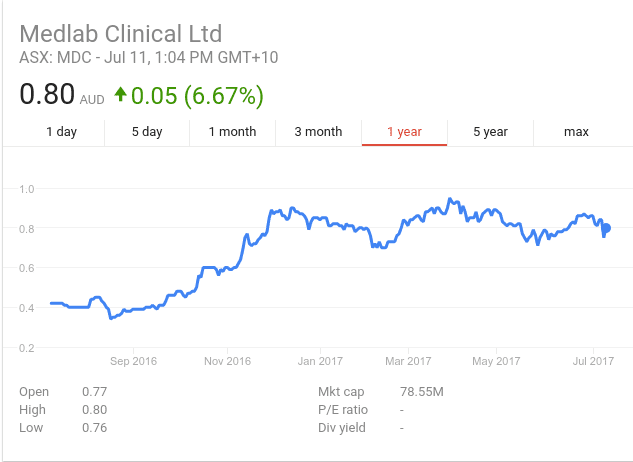 Listing in July 2015, it’s been a comfortable ride for everyone onboard this baby. If you snapped up stock in the IPO you’re sitting on a four-bagger today and even stragglers have probably managed a double. The share price has been building a solid base over the past 6 months and is sitting right in the middle of that range now, at 80 cents, which infers a market cap of $134 million.

Taking a look at the most recent financial statement, the company recorded a loss of 1.7 million for the half-year ending December 2016, with assets of 6.7 million and liabilities of 1.6 million.

According to their website, they focus on delivering new medicines for:

Right off the bat, it’s clear to see that they have other irons in the fire beside the CBD products that are in the pipeline. That equates to anti-fragility as Taleb would say. (We’re big fans and have all his books!)

We took a look at the Top 20 shareholders list, as of August 2016, and it looked like it’s supposed to for a company at this stage of its evolution. Some big names like Morgan Stanley, HSBC and Citicorp are on the register, in the form of nominee companies. They’ve already bought into the story.

Add this one to your watchlist if you’re interested in the sector.

While news is thin on the ground (which is covered with permafrost), one story that caught our eye was the report that the miners-cum-weed-barons Queensland Bauxite (QBL.AX) are trialing a “unique” winter weed crop.

Let’s hope they don’t need a snow shovel to harvest it!

FULL DISCLOSURE: None of the companies listed in this article are Equity.Guru clients.