On the back of our recent piece about the implosion of Stemcell United (which has cratered a further 33% since we released the article) we thought it worthwhile to cast our eyes across the sector in general and take a look at the current crop of ASX listed pot stocks.

Who are the main players in this dope domain and what do they have to offer the investing public? 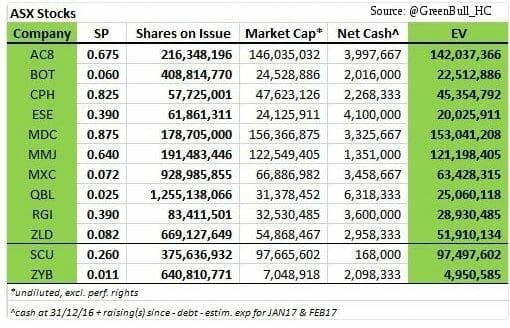 The sector is in it’s infancy – in fact this time last year none of the stocks profiled were even on the board. Having said that these minnows, with an average market cap of below $80 million each, have run hard over the past few months and easily outperformed their global peers. 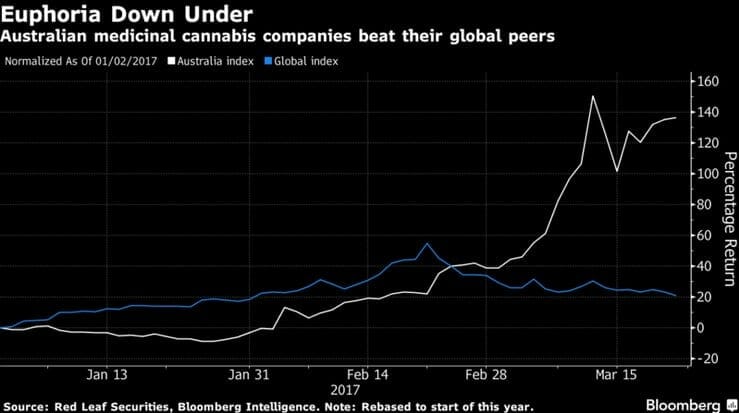 Even though some of these stocks have come out of the gate hard and fast they are a long way from reaching the home stretch. Not all of them will make it past the winning post, so the usual rules apply. Stay humble, stay focused and whatever you do, don’t bet the ranch.

“The sector isn’t for everyone,” he said. “These stocks are being bought on their potential rather than on their performance as financial vehicles. But in the Australian market, there’s enormous appetite for it. And that’s why such companies list here.
Some of them might be lucky to make it to the end of the year. But others will be serious companies in the future. But you need the stomach for it to invest in them.”
– James McGlew, executive director of corporate stockbroking at Argonaut Securities
(AFR March 15 2017)

Entrants trying to establish a foothold in this emerging market face having to overcome significant hurdles thanks to complex state and federal legislation currently in place.

Case in point is unlisted Ecofibre, which has been forced to decamp to the United States where more favorable conditions allow them to continue carrying on their core business. They cite the current legislative framework in place in Australia, designed to stop medicinal use spreading to recreational, as being unworkable and cost prohibitive.

Others are taking a more optimistic outlook and positioning accordingly.

John Athanasiou, chief executive officer at independently owned Red Leaf Securities, a Sydney-based brokerage and advisory firm that’s managing the Hydroponics Co. (THC.ASX) share sale, is betting the rules surrounding medicinal cannabis will be relaxed further. Anyone who invests in the sector at this stage has got his back.

We’re also keeping a close eye on the Twitter feed on Jonathon Howe, one of his colleagues, who seems to well and truly have his finger on the pulse of day-to-day happenings within the space. Let’s hope he continues to share with the group in the months to follow.

The fact that some commentators seem fit to call it a bubble already actually makes us think that these stocks have plenty of room left to run. Now is the time to sort out the pretenders from the contenders and stake your claim before the fireworks light up the night sky.

Creso – The cream of the crop

Here at Equity Guru we don’t tell you what to buy – that’s up to you. Instead we focus on what we like (or don’t) and why.

Quite frankly it’s hard to go past Auscann Group Holdings (AC8) but to us Creso looks like a juicy mango that is yet to fully ripen. Without a doubt, they are the standouts among the stocks profiled and the prudent play might be to divvy up your stake into two and have a bet each way.

When asked, our resident Pope of Dope Chris Parry listed these attributes as a good yardstick for measuring the potential of weed stocks:

Applying these metrics, they both pass the piss test with flying colors.

As they say though, there can only be one winner, and in this instance we’re giving the gong to Creso Pharma.

Headed up by Dr. Miriam Halperin Wernli, their specialty lies in developing CBD products targeting both humans and animals. Bloomberg cites Dr. Wernli as a senior pharmaceutical and biomedical executive with over 25 years of strategic and operational leadership in the biopharmaceutical industry and a deep understanding of drug and product development. Not too shabby!

After a $5 million IPO handled by EverBlu Capital, they debuted on the ASX on October 20th 2016 and the share price currently sits at a very healthy 82 cents. Everyone who’s already on board is ‘in the green’ so to speak. And nicely so.

They have already achieved significant progress with their first human cannabidiol (CBD) fully plant-based nutraceutical product and are in the midst of an aggressive push into the Latin American market having signed a commercial agreement with Brazil-based Sin Solution.

http://gty.im/476579433
“This agreement gives Creso entry into Latin America via a strategic partner in the continent’s largest economy, Brazil. Working with Sin Solutions gives us access to further key commercial partners in the region and allows us to tap into a vast and fast-growing market supporting the long-term growth of our business” – Creso Pharma Group CEO and Co-Founder Dr. Miriam Halperin Wernli

Nutra-what? Good question. Pass the Wikipedia, will you? A Nutraceutical is a pharmaceutical-grade and standardized nutrient. Got it, thanks. Potential applications include the treatment of osteoporosis, stress and anxiety and pet products for veterinarians. Woof Woof!

Did we mention the developments that are currently taking place in Europe?

Cannabinoid nutraceuticals set for European take off?
By David Anderson, 21-Mar-2017Europe will become a key market for a number of new cannabinoid-infused nutraceutical products targeting the multi-billion European nutrition industry, said Swiss firm Domaco as it strikes a deal with an Australian cannabis and hemp developers.

Creso is already well placed on the European front – In fact, Wernli’s Montblanc must be getting quite the workout, having signed another binding Letter of Intent (LOI) with high-tech Swiss food and pharma development company, Domaco, a leading European producer of products for global pharmaceutical and food companies.

Any downside? Not that we can see.

There is some concern that they went cap-in-hand and tapped the market for another $5.6 million recently but the way we look at it this was a smart play – it’s much easier to raise capital when you don’t need it and your SP is comfortably in blue sky than when the bankers are knocking on your door.

The funds have been earmarked to aid expansion into new regions and fast-track products already in the pipeline. A share purchase plan to raise a further $1 million will follow.

Need more info? A recent report by Independent Investment Research (IIR) has plenty of details for those needing to dive deeper.

We think this one ticks all the boxes. Watch this space.

Keep in mind that investing in the biotech sector always entails taking on extra risk and Creso is still in its early stages. Anyone considering adding these stocks to their portfolio may wish to seek professional financial advice or at the very least enroll themselves in a tea-leaf reading course.

There, you’ve been warned.

Although medical cannabis technically became legal after the federal parliament passed legislation last year, it is now up to each state to individually regulate how patients access it.

It’s one thing to bust down the doors and arrest an 85 year old who might have some Nembutal hidden under the floorboards but quite another when the situation involves a parent administering cannabis oil to an eight year old with a brain tumor. 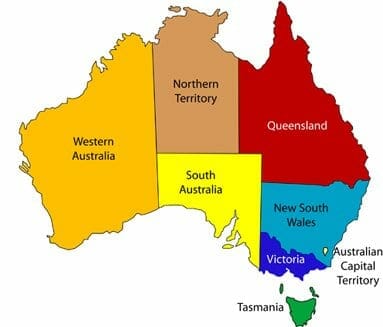 The Poisons and Therapeutic Goods Amendment Regulation 2016, passed on July 31st 2016 has enabled doctors across the state to legally prescribe medicinal cannabis for their patients who have exhausted standard treatment options.
(Jane Hansen, The Sunday Telegraph, July 30, 2016)

Access to Medical Cannabis in Victoria centres around ‘eligible patient groups’. As outlined on the health.vic.gov.au website:

The Access to Medicinal Cannabis Act 2016 passed the Victorian Parliament on 12 April 2016, enabling access to medicinal cannabis to defined groups of patients.

Children with severe intractable epilepsy will be the first group to access medicinal cannabis products as part of the Victorian scheme in 2017.

This is a significant and complex reform. To make sure we get the framework right, it will take time to ensure all the key elements are in place.

Health Minister Cameron Dick claims the state “is leading Australia in providing a pathway to access medicinal cannabis treatment for those who need it most, in a safe, controlled way”

However the devil is often in the details. Let’s take a look at the Public Health (Medicinal Cannabis) Act 2016 passed by Queensland Parliament on 12 October 2016.

Approval from the Therapeutic Goods Administration (TGA) and Queensland Health is required before medicinal cannabis can be prescribed by an approved doctor and supplied by an approved pharmacist.

Medicinal cannabis will only be approved when:

The situation in SA seems dire. The ABC reports at a forum at Parliament House, hosted by the Greens’ Tammy Franks, there were calls for the State Government to clear legal roadblocks stopping patients from accessing marijuana products.

“It is a Kafkaesque situation, we have been told something is legal and yet there is no way for a patient in South Australia to go to a doctor and get a prescription” – Tammy Franks.

WA doctors will be able to legally prescribe medicinal cannabis after the state government threw its support behind changes to Commonwealth laws. Any doctor wishing to prescribe medicinal cannabis would need approval from the Therapeutic Goods Administration and an expert advisory committee, to be established by the Department of Health.
(Heather McNeill, watoday.com.au October 28 2016)

From 1 November 2016 cannabis products which are intended for medicinal use and are either:

will be able to be prescribed as a schedule 8, ‘controlled’ medicine in the ACT.

The Tasmanian Government is developing a Controlled Access Scheme (CAS) to allow patients to access
unregistered medical cannabis products under prescription from their treating medical specialist, in limited circumstances where conventional treatment has been unsuccessful. as per the fact sheet put out by the Department of Health and Human Services.

Saving the best till last..

As far as we can tell medical cannabis is NOT legal in this part of Australia. Having shelias peeling off all their kit down at the local to entertain a bunch of rowdy blokes knocking back Darwin stubbies is OK but helping a 3 year old avoid seizures is not cool. Makes sense to us. 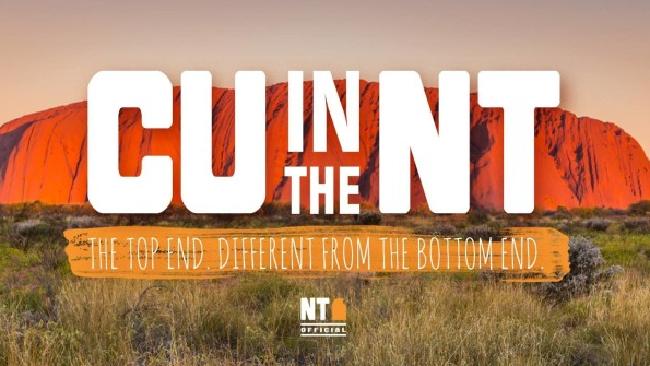 Disclosure: Trying to get a grubstake together so I can be a part of the action.