It’s been a roller-coaster ride for STEMCELL UNITED LIMITED (SCU.ASX) shareholders over the past week in what appears to be a well orchestrated ‘pump and dump’ that has played out across the Pacific on the ASX. As many discovered to their horror, though, the restraints weren’t quite working as expected and they found themselves in free-fall. It happens.

In some ways the stock market is nothing more than a wealth transfer mechanism from the many to the few and SCU became the day-traders darling last week when, unloved and unwanted at below 2 cents, it took off like the proverbial rocket briefly poking it’s head above the stratospheric one dollar level less than 8 trading hours later. What drove such madness in fools, you ask? 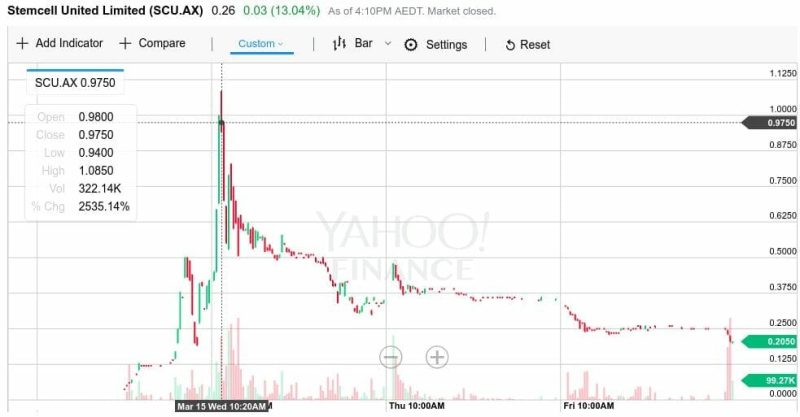 It all came on the back of an announcement by this biotech minnow, who, in a attempt to move away from their core ‘business’ of TCM (Traditional Chinese Medicine) informed the market on Wednesday 14th March that they had appointed Nevil Schoenmakers as Strategic Advisor to pursue opportunities in the Medical Cannabis sector. It doesn’t hurt that Schoenmakers is known colloquially as the “Cannabis King“, a title bestowed upon him by the industry rag High Times.

The trading bots must have wet themselves with the snippet that the Medical Cannabis market is projected to reach USD $55.8 billion by 2025. Way to light that fuse. The real shenanigans played out in the first few hours of the day after the announcement was released, with the stock opening unchanged at 42 cents then racing to $1.085 before promptly collapsing to below 40 cents by days end.

Make no mistake – this was a double black diamond run with plenty of punters swept up in the ensuing avalanche. They are now licking their wounds and pouring their hearts out on internet forums whilst they plan their next move.

It’s the company that’s gone gangbusters on the coronation of the “Cannabis King” as it’s official adviser and it’s likely to have made some lucky investors rather rich. – Motley Fool

A stock which rises more than 2000% in the space of a single trading session is bound to grab a few headlines and light up the newswires. Hell at one stage someone calculated that it was up 6900% in 6 hours. Sure beats leaving your money in a term deposit paying a measly 2.2% per annum.

The numbers are truly mind-boggling. Had you dumped a couple of thousand down on this name at the beginning of the year you would now be sitting on a 35K war chest. At current prices.

With nimble fingers and agile mouse clicks you may have even been able to cash out somewhere near the top of the price spike last Wednesday to line your pockets with even more of the filthy lucre. If you weren’t greedy, that is! In reality though, anyone trying to surf this wave starting last week would probably have had more luck at the Hawaiian Pipeline.

While the ASX hasn’t seen fit to issue SCU with any speeding tickets over the share price rort (at least officially), the company has issued various statements since last Wednesday in an effort to clarify the situation for nervous investors, one of them being a ‘Cleansing Statement’ (whatever the hell that is!).

Digging deeper we discover that the company issued 11 million shares on the 16th March 2017 to ‘the strategic adviser and a professional party’ at a cent each, the purpose being a ‘Joining bonus and referral bonus’. A cent each – nice one.

Looks like Schoenmakers himself pockets 10 million shares and with just over 250 million currently on offer (370 if you include the head-honchos 120 mil which are still escrowed), this represents a nice whack of capital.

The shares allotted to Schoenmakers are escrowed in tranches of 90 days (20%), 180 days (30%) and one year (the remaining 50%). In addition to his new shareholding he will pocket a monthly retainer of 5K AUD on top of an unspecified expense account. Nice work if you can get it!

So just who is this so-called “Cannabis King”? Are we likely to see him in the next episode of Billions, talking to Bobby Axelrod in a dimly lit basement somewhere? 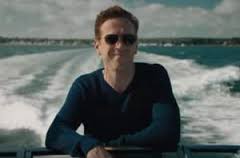 Nah
A quick Googling reveals a colorful identity who engineered a global weed seed distribution business and enjoyed an 11 month stint in Western Australia’s Canning Vale Prison back in 1990 (arrested at the request of the US Department of Justice) before making bail and then quickly disappearing, only to re-surface a few years ago. How we love those with a murky past.

Irrespective of what Schoenmakers brings to the table, one thing’s for sure – plenty of inexperienced traders who bought the news are now left holding the bag, with the stock succumbing to gravity and falling back down to the mid twenties. Many are now discovering that when it comes to trading volatile penny dreadfuls, it is often not as much fun as being at the casino.

From TCM to THC

The company (“SCU”) describe themselves as “a bio-technology company which focuses on the growth, reproduction, culture and extraction of stem cells for medicinal, health and beauty applications using its environmentally friendly proprietary technology.”. They don’t appear to have been up to much prior to this announcement. A few PR’s referenced a skin tightening creme, but hey, that’s not market moving fodder.

First some background. Like a phoenix rising from the ashes, the company, formerly known as ‘On Q Group’ in their previous incarnation, was placed into voluntary administration in 2008 and then liquidated later that same year. 2014 saw the company enter into and subsequently be released from A Deed of Company Arragement (DOCA). It was only re-listed on the ASX on the 14th September 2015 after a successful capital raising via a prospectus (dated 29 June 2015) offering the sale of 23 million new shares at 20 cents a piece – for a total of 4.6 million dollars.

That prospectus, which contained the comforting words “The Company is not currently carrying on any business“, outlined the company’s intentions to undertake a name change to Stemcell United and enter into a Sales and Purchase Agreement with Mr Gu Huanqing to acquire the entire issued share capital of Stemcell United Pte Limited (“SUP”), a Singaporean listed entity. As a result of this transaction Mr Gu pocketed the tidy sum of AUD 2.5 million in cash and 120 million shares, and is now the CEO and Executive Director of the merged entity. It appears that these securities are still under escrow for a few months longer according to official documents lodged with the exchange.

Hidden towards the back of the prospectus is the issuance of 2,000,000 options (over ordinary shares) to the Lead Manager, APP Securities Pty Ltd, exercisable before 14th September 2018 at 20 cents per share. Even at today’s prices they are ‘in-the-money’. You do the math.

Let’s take a quick look under the hood. What exactly does the company do? Answer – They extract stuff from rare orchids.

‘DENDROBIUM OFFICINALE’ and ‘DAEMONOROPS DRACO BLUME EXTRACT (RESINA)’ are the only two items listed as their ‘Products’, both of which are said to have high medicinal value in TCM circles.

Reminds me of Moonraker, where Drax extracted a toxin from orchids in the Amazon, stuffed it into glass globes and then launched them from outer-space onto an unsuspecting populous. Thankfully for us, Bond was quite adept at piloting a Space Shuttle.

Their IP centers around the use of High-performance liquid chromatography, which is a technique in analytical chemistry used to separate, identify, and quantify each component in a mixture. It’s been around since the early 1970s. Maybe they’ve built a better mousetrap, who knows?

Trawling through their latest half yearly report, NTA is non-existent and EPS a smidgen over 4 cents. Even at its current market cap of circa 60 million, serious questions need to be asked. Looks like they’ve got 400K cash on hand and it’s anyone’s guess how long that will last.

The cash-flow statement is even more concerning. ‘Receipt from customer’ comes in at 5,804. That’s dollars not thousands. I think the frozen bananna stand that my nephew was running last summer made more in a single month.

Taking a step back

Charts aren’t everything but consider this for a moment. 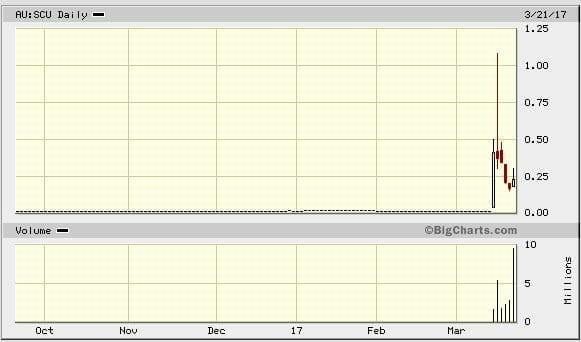 That’s one scary candle.
To look at the chart beyond last week was akin to staring at a cardiogram after life support had been switched off. To put that into perspective a total of 38,500 shares traded between the 31st of January and 3rd of March this year with the price paid hovering around 0.014 (1.4 cents each).

Then the tsunami was unleashed last Tuesday when 1.72 million shares changed hands which looked somewhat pedestrian after 5.5 million traded the following day. 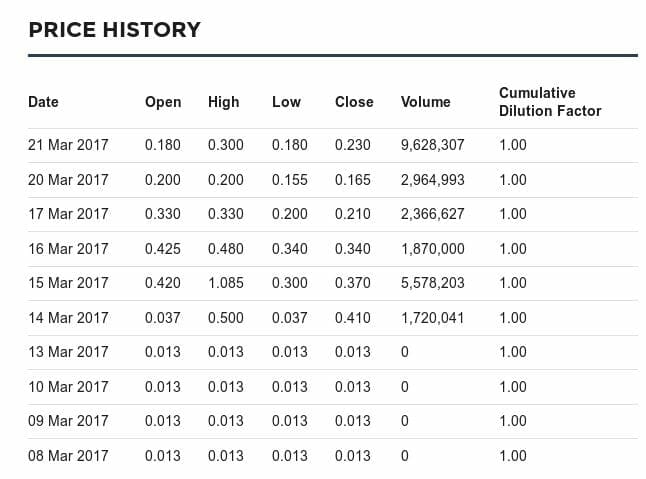 If you prefer to stick to fundamentals try finding any metric that is above zero. There appear to be few, if any. We’ve looked.

Keep an eye on anyone who posts ‘Substantial Shareholder Notices’ in the coming days and weeks. If genuine players were involved in recently building a stake they will be forced to show their hands.

Australia is many things yet progressive is not one of them – at least with the current crop of politicians at the helm. Just last month, Labor leader Bill Shorten called on the government to speed up the rollout of medical marijuana products to Australian patients.

The slow pace at which change is happening in Australia is beginning to wear thin with those who desperately need medications. – Hemp Gazette

While 2016 saw legislation ushered in legalizing the use of Medical Cannabis, a haze still hangs over the space, especially when it comes to how patients can go about getting their hands on the stuff. And at what price. Those who have come to rely on it for chronic pain relief are having to import their own supply and risk being caught on the wrong side of the law. A terrible predicament for people in genuine need.

Any company that can keep up with the evolving legislative changes and fill the supply gap in this space will likely be richly rewarded. To this end, it’s worth keeping an eye on the ASX ‘dope hopes’ in the coming months. On deck is ‘The Hydroponics Company‘ – ticker THC. Talk about being off to a great start!

Disclosure: The author is a terrible small-cap trader and currently holds no investments other than physical gold.