I wrote yesterday, before the trading day had ended, that Calyx Bio-Ventures was up 133%. By the end of the trading day, I was way off. It had more than doubled.

By the end of today it had tripled, up from $0.015 where it spent a large amount of time treading water over the last few months, to $0.045 today. That’s a big jump, and it came on the back of well over 6 million shares traded over two days.

Back on Monday, it wasn’t this way. On Monday, nobody gave a crap about Calyx. But by late Tuesday, that had changed. By Wednesday, it had gone berko. 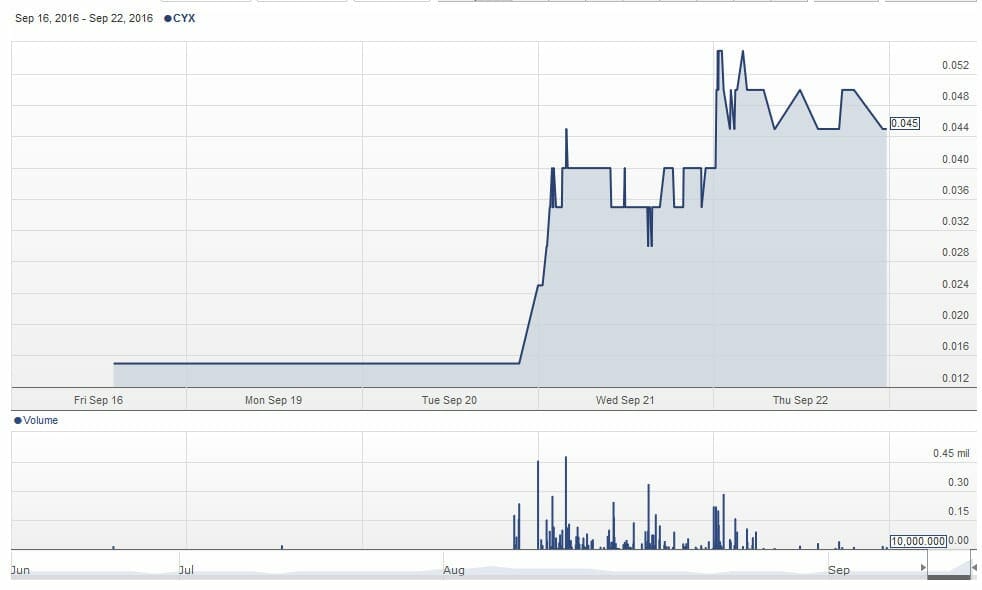 CEO Roger Forde called me up this morning, after I’d posed the question of whether someone at CYX was buying all that stock on the inside. He told me none of it has come through him, and had just minutes earlier put out a news release to that effect.

Calyx Bio-Ventures Inc. (‘Calyx’ or the ‘Company’) wishes to confirm that
the Company’s management is unaware of any material change in the Company’s
operations which would account for the recent increase in market activity.

But Forde did mention that the timing had been fortuitous, as he had long been considering a rollback to get the stock back to a place where he could run a financing for future growth.

“I held off for some time because nobody likes a rollback,” he said. “Sometimes it’s necessary, but I think, if this buying continues, we would be content to leave things as is, which would be good for all investors.”

Forde still has no info for me on what the company has planned, other than it’s software-related, and a slight deviation from where the company has focused over the last few years.

“I would expect we’ll have some news in the coming weeks, but I don’t want to put anything out until we’ve locked it all down,” he said. I asked whether he was making a concerted push back into the cannabis services arena, and he reiterated, “I don’t have anything for you right now.”

“I appreciate your interest, but I’ve got a lot of things to get through before we announce anything publicly.”

FULL DISCLOSURE: Equity.Guru has no commercial arrangement with Calyx Bio-Ventures, though I have previously worked with the company at Stockhouse as part of a capital markets program. I hold no stock in CYX.