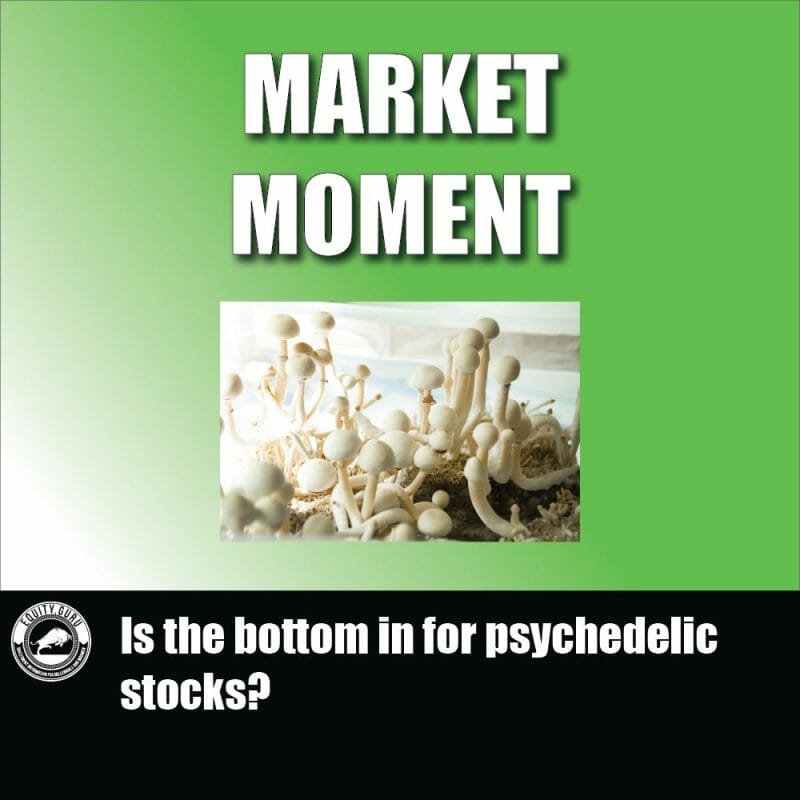 Some positive action on psychedelic stocks in the last few days. As a technical analyst, there are good signs indicating a reversal is occurring. The downtrend is over, and an uptrend is beginning. The bottom is in.

Many traders are looking for the reason why. If you do a google search for psychedelics, you don’t really see any major news that came out with the beginning of the breakouts. The only thing I see that is being discussed is NFL quarterback Aaron Rodgers saying psychedelics are the reason for his best NFL seasons. Although, we are not talking about micro dosing. Rodgers says his experience with ayahuasca led him to back-to-back MVP seasons in 2020 and 2021.

Some media articles I am seeing are condemning his usage of the plant. The important thing to note is that psychedelics are slowly losing their “taboo” status, and are going mainstream. There will still be a lot of opposition towards using it, however many who do use psychedelics say it helps them with their depression, and when consumed for a hallucinatory journey, will change their lives for the better.

I just spoke to someone who used psychedelics for the first time and he said that it is something you need to try before you realize how great this is for mental health issues. It affected him so much that he is now raising money to start clinics for first responders and treating them with psychedelics.

When it comes to the markets, global stock market indices are showing signs of reversals. The majority of them are now out of bear market territory. Keep this in mind when we look at the psychedelic charts as this could be one of the reasons we will see momentum follow through as retail money returns to the stock markets. 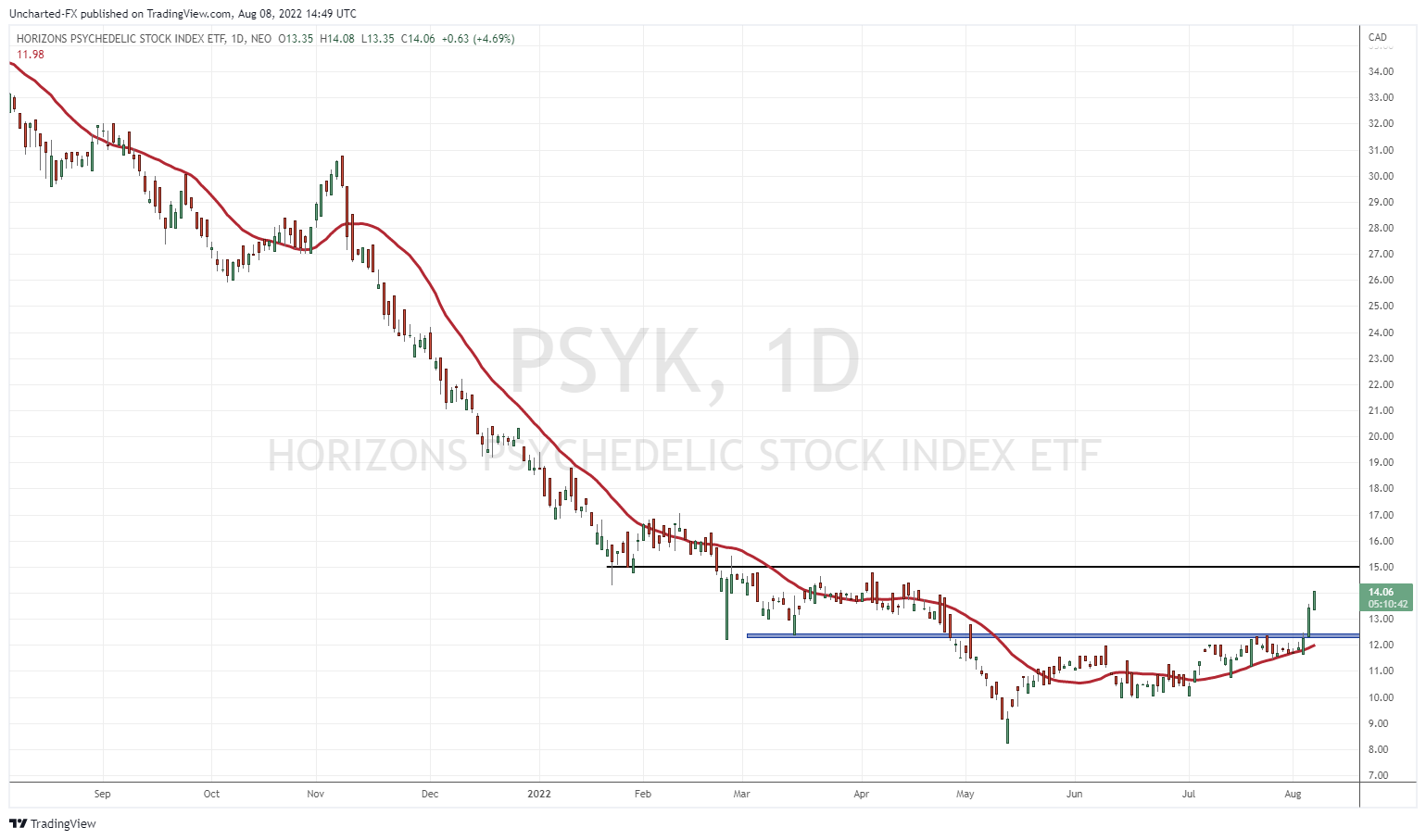 Let’s start with the Canadian psychedelics ETF PSYK. Beauty, and trust me, you will be seeing a lot of beauty charts in this article.

On Friday August 5th 2022, PSYK confirmed a breakout with a strong green candle close above $12. Some will say we even triggered a cup and handle reversal pattern. The important takeaway is that the break above $12 has initiated a new uptrend. No more lower highs and lower lows. If we hold above $12 going forward, we should expect to see higher highs and higher lows.

The next level of importance? $15 ahead. PSYK could find some resistance there as some traders take profits. This could see PSYK pulling back before seeing buyers jump in and confirming our first higher low in this trend. 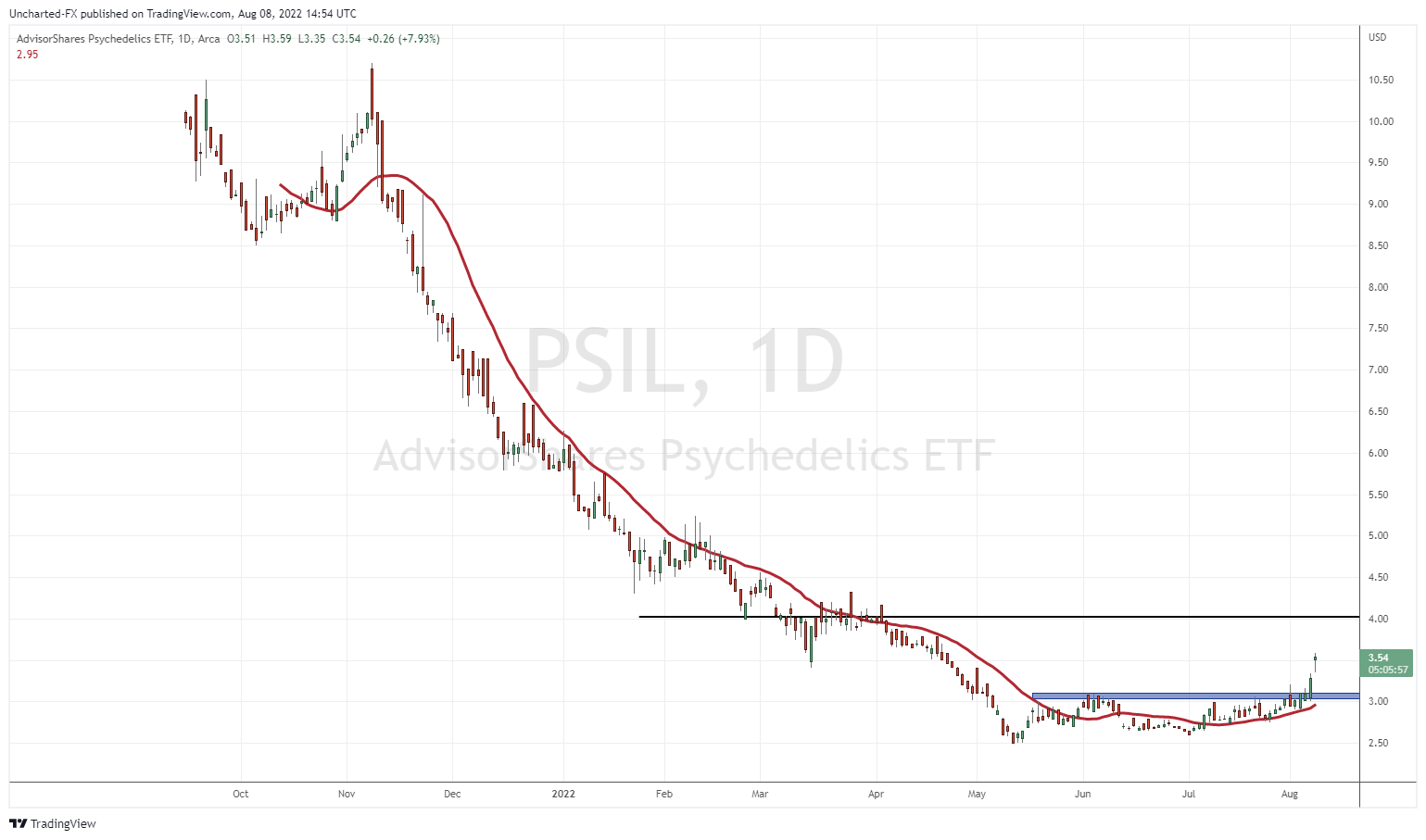 We have similar price action on the US psychedelics ETF PSIL. From a technical analysis perspective, this chart is causing me to salivate.

PSIL has been in a long downtrend, which began to range beginning in May of 2022. After three months of price ranging, we finally broke out on August 5th.

A range is important because it tells us that the selling pressure has exhausted. Instead of making new lows, we begin to range which indicates the lack of major selling. Markets are in equilibrium with buyers and sellers.

A range after a downtrend is also important because it means that a reversal is occurring. The end of a downtrend and the beginning of an uptrend. The trigger for this reversal is a breakout above the range. This occurred on August 5th, and as long as PSIL holds above $3.00, a new uptrend remains in play. Targets are $4.00 in the short term, and then higher in the medium term. 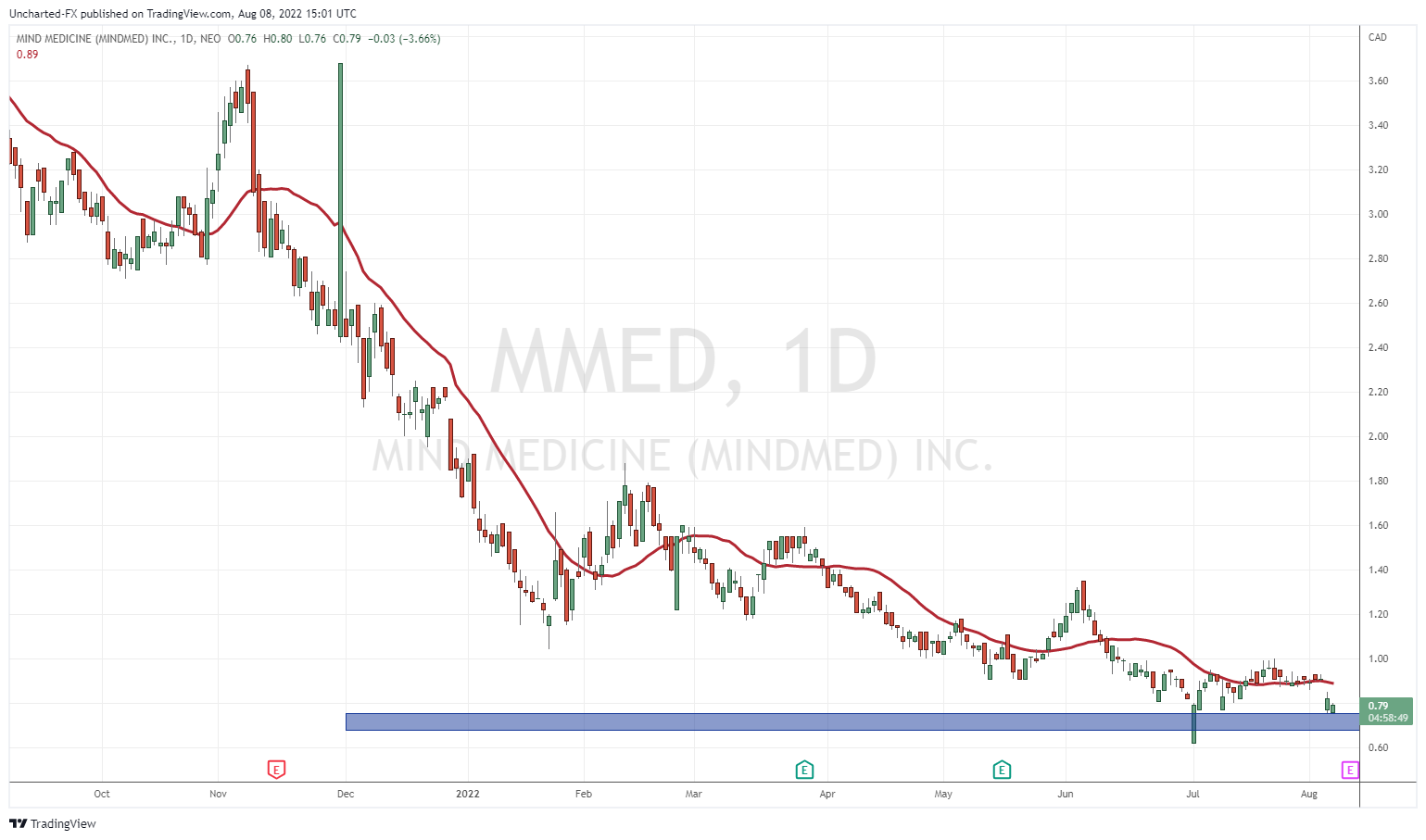 MindMed is what comes to most people’s minds when it comes to psychedelic stocks. On August 5th, while psychedelic stocks and ETFs were seeing amazing price action, MMED saw its best volume day since January 25th 2022. The 5th of August saw a volume of just over 1.5 million shares traded.

There was actual news which was released the day before on the 4th. MindMed announced that its Board of Directors has approved a ratio of 1-for-15 reverse share split of its common shares. As a result of the reverse share split, there will be approximately 28.4 million shares of common shares issued and outstanding. The reverse share split is intended to enable the Company to achieve several important corporate objectives, give the Company greater flexibility in considering and planning for future potential business needs, and to address the Nasdaq minimum bid price requirement. 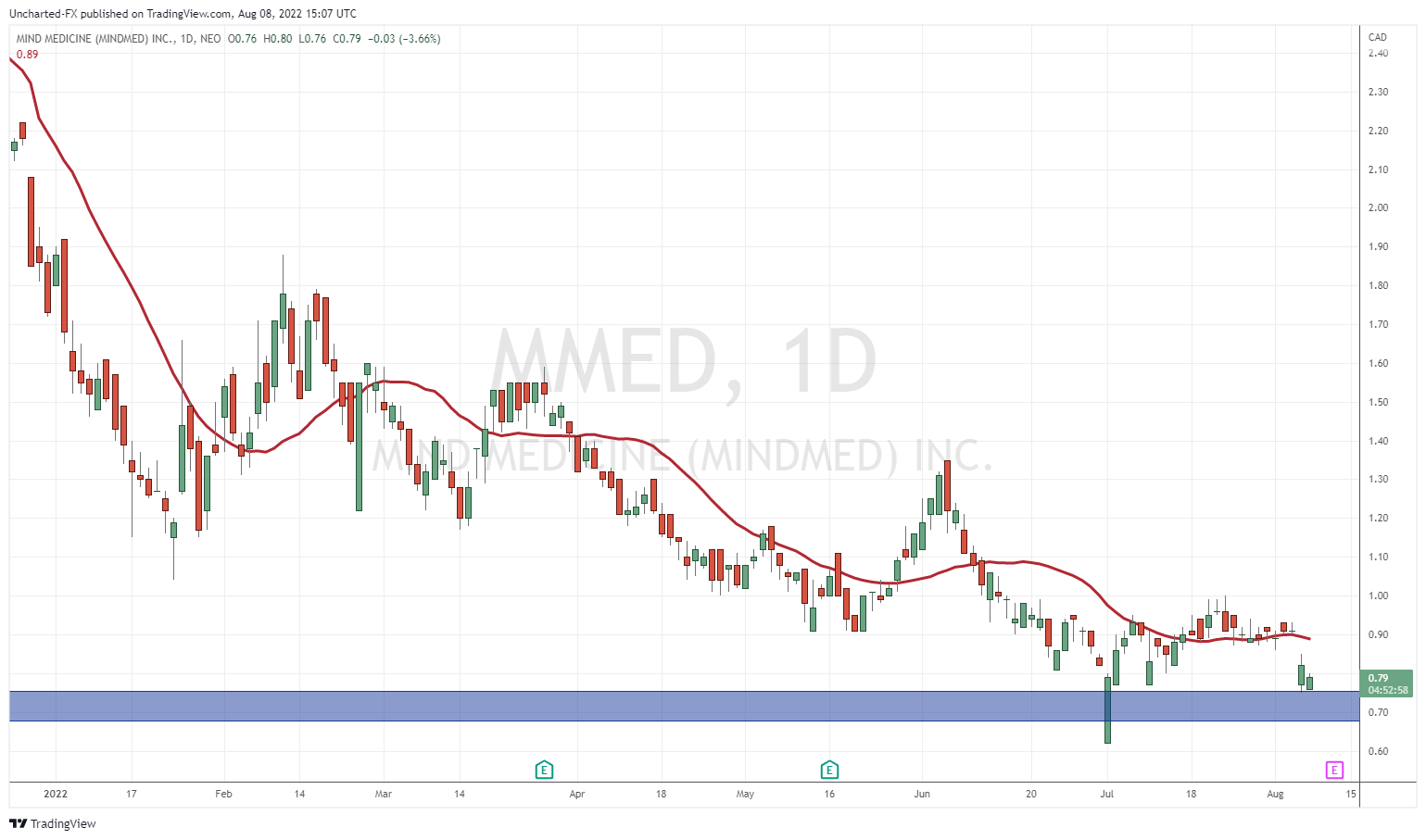 The stock gapped down on the stock split announcement and is an outlier from what I am seeing on psychedelic charts. Keep in mind that earnings are also coming out on August 11th which will be a huge catalyst.

What do I need to see to turn bullish on MindMed? A technical close above $1.00. However there are plenty of other charts in Canadian psychedelics that are already triggering their breakouts and look bullish. 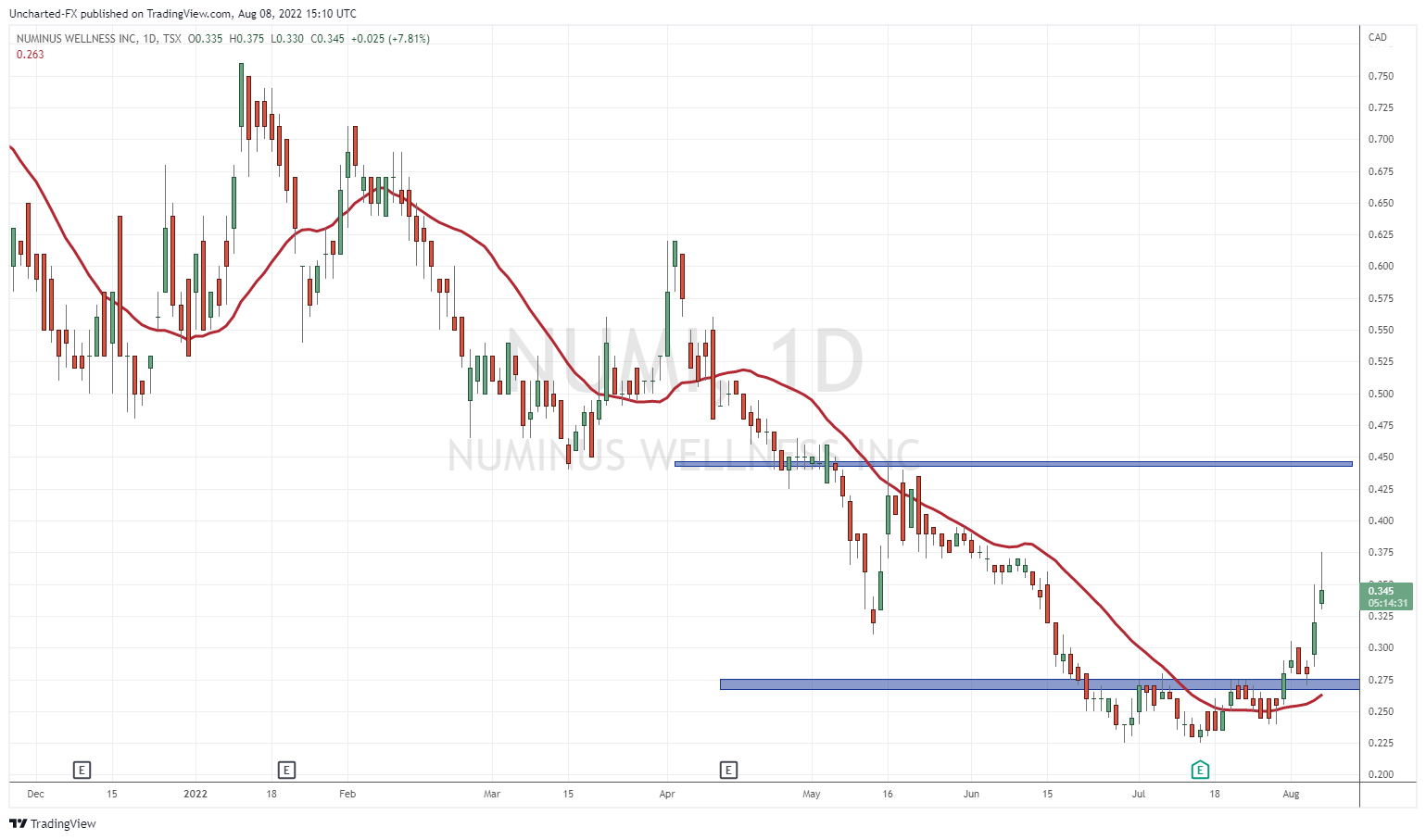 Numinus Wellness is the set up that got me excited when I did my post market weekend scan. Everything here meets my criteria. When you look at their press releases, there has not been one out for 25 days. This setup is about the technicals, and perhaps this means that good news is coming down the pipeline.

Numinus’ breakout occurred on July 29th 2022. Some of you may see the pattern. Numinus confirmed and triggered the quintessential reversal pattern known as the inverse head and shoulders. Very powerful and bullish stuff on Numinus. In fact, the uptrend is well advanced as we have already completed the pullback and retest portion. The stock dropped back to retest the breakout zone of $0.275 and bounced hard. This is our first higher low in a new uptrend and as long as we remain above $0.275, we should see more highs.

There you have it. Psychedelics are showing positive signs of reversals. Some stocks are well advanced in their new uptrends. There isn’t major news shaking the psychedelics sector, so this move appears to be momentum driven by broader stock market reversals. 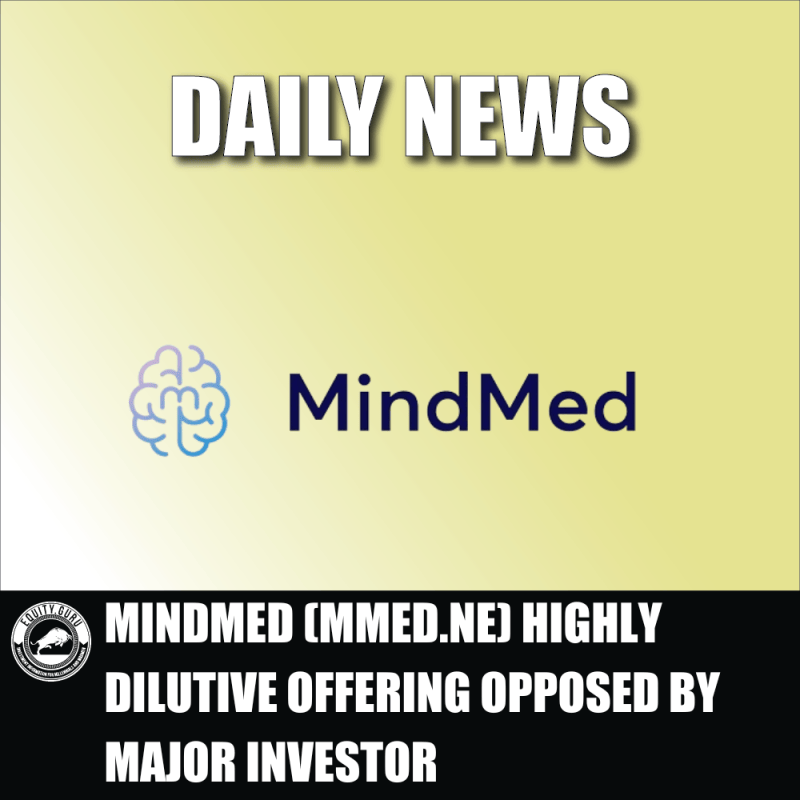 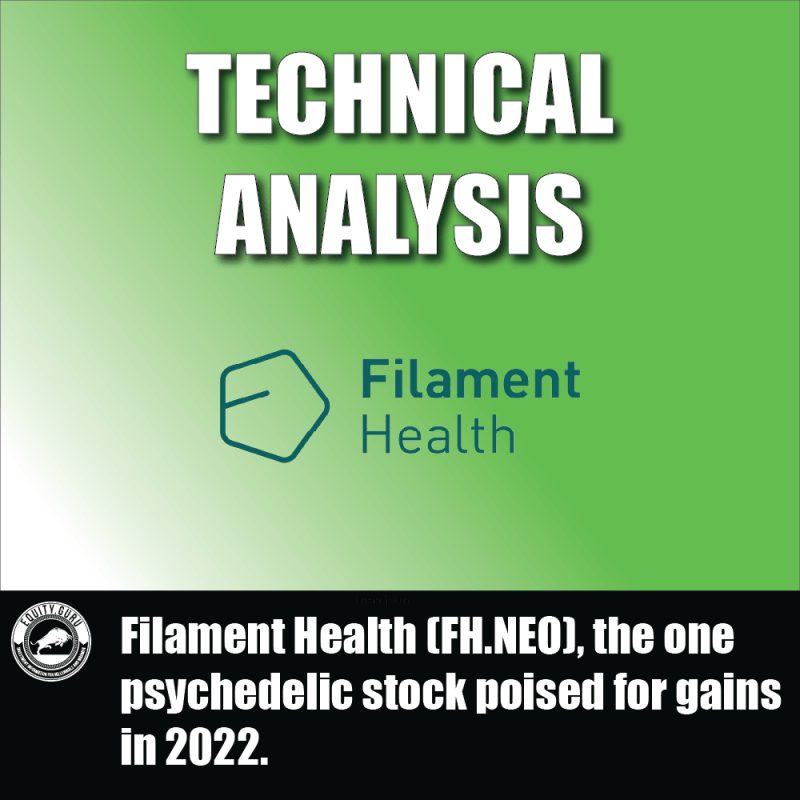 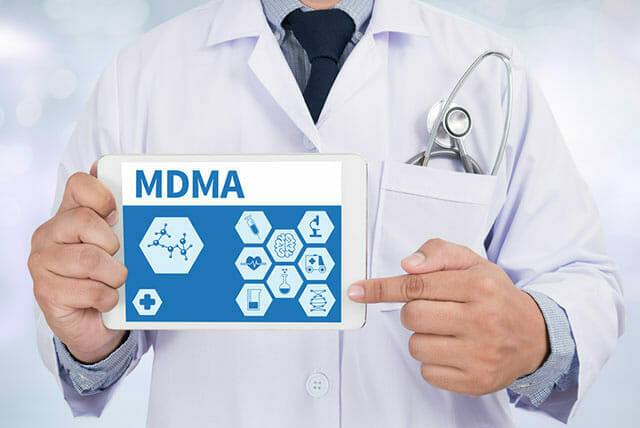 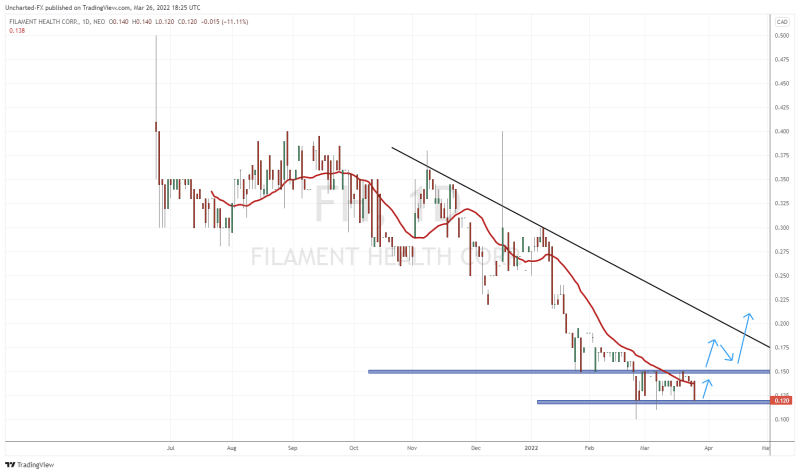 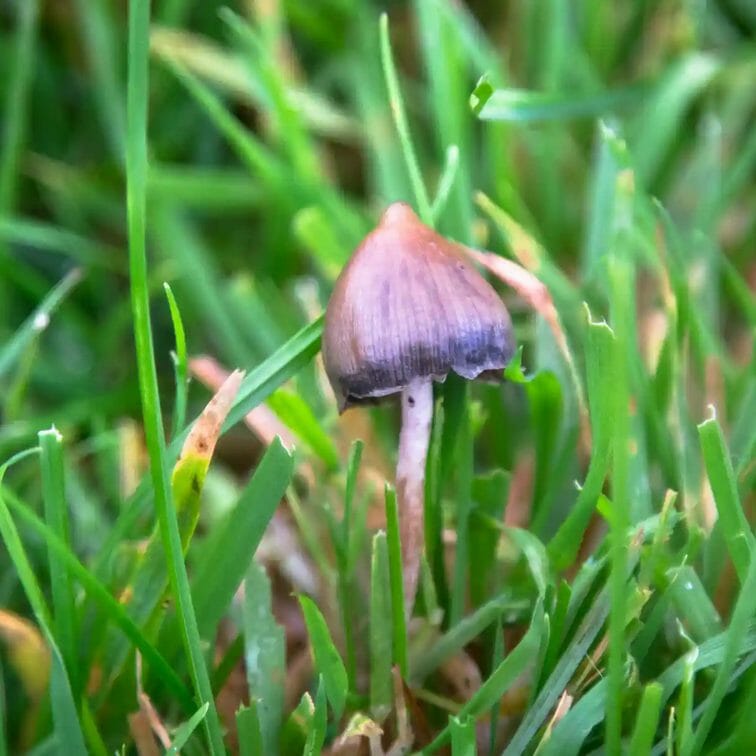 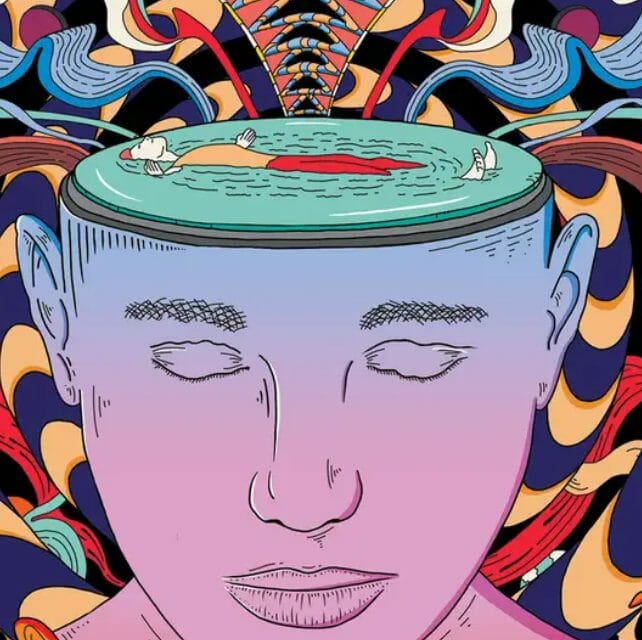