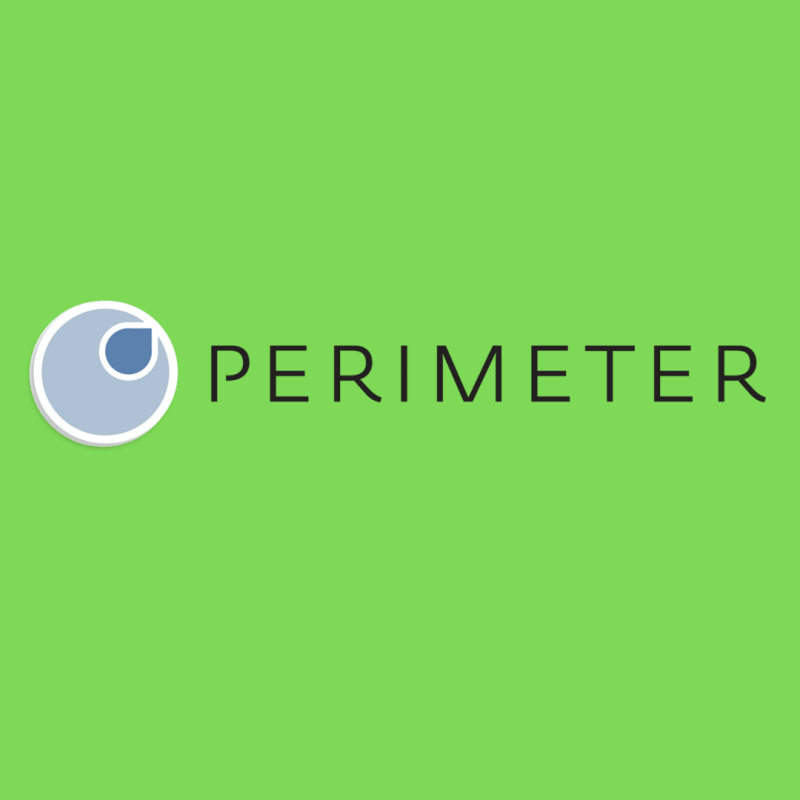 Perimeter’s mission is to modify cancer surgery with ultra-high-resolution, real-time, advanced imaging tools to tackle unmet health needs. Perimeter’s vision is that patients will no longer experience the costly emotional and physical ordeal of being called back for a second surgery due to cancer left behind. 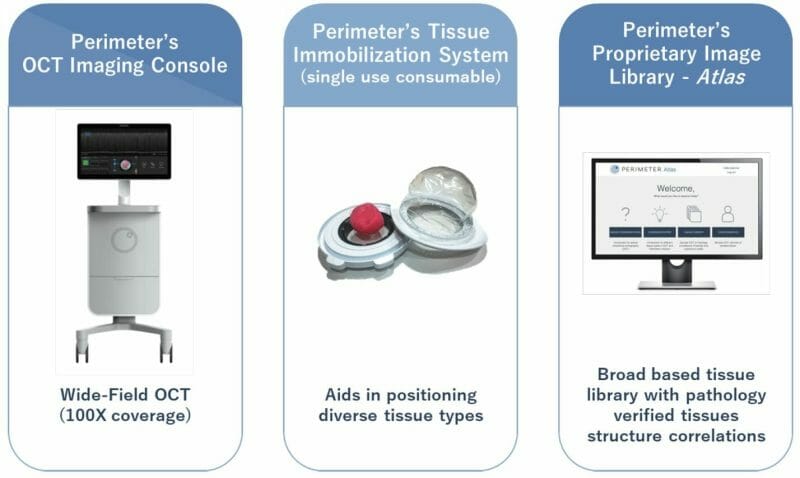 Perimeter’s technology has been devised so that it can be amalgamated into current clinical systems. Following surgical excision, the tissue is scanned for verification prior to completion of the surgery. This real-time imaging provides the surgeon with information needed to determine whether additional intervention is required. Several key features that the company has identified include:

PINK is currently in its product development stage and consequently has not generated sales to date and has experienced losses since inception. This requires additional financing from external sources before the company expects to generate positive cash flow.

The firm does however receive product development grants from their agreement with the Cancer Prevention and Research Institute of Texas (“CPRIT”). CPRIT will grant the Company US$7,446,844 to fund activities related to its artificial intelligence software. For 12 years following the first commercial sale of the final products PINK is required to pay CPRIT a royalty of 2.5% of revenue until such time that 250% of grant proceeds have been repaid and 0.5% thereafter for the remaining twelve-year term. 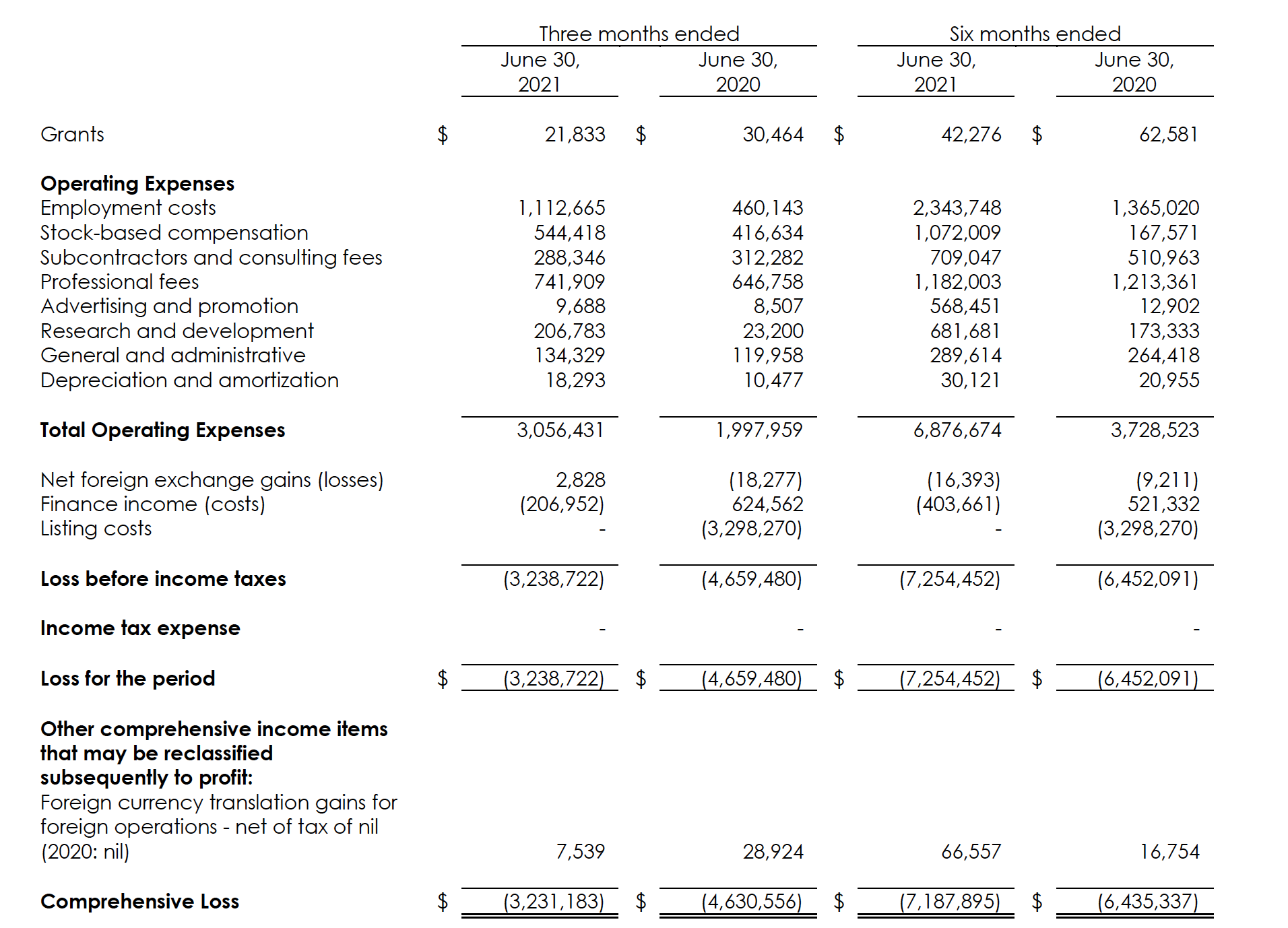 PINK has also issued $C4 million and $C8 million in stock in 2019 and 2020 respectively. They use majority of the funds to find that their employee costs and professional fees. For the six months ended June 30, 2021, the employee costs totaled $2.3 million not including $1million in stock-based compensation. In the previous year the company spent $1.3 million on employment costs and 167,000 on stock-based compensation. as the firm continues to work through the development stage to commercialization, we can expect employee costs and professional fees to increase in tandem as the business gears up to generate sales revenue.

The costs that we would expect to be one-time expenses would be the listing costs of about $3.2 million on June 30, 2020. Majority of the money that they generate from external sources will go to paying off employment costs professional fees advertising and promotion research and development and subcontractors as well.

The balance sheet tells us more about the structure of the company than the income statement currently because of the lack of sales or pre-sales status of the company. 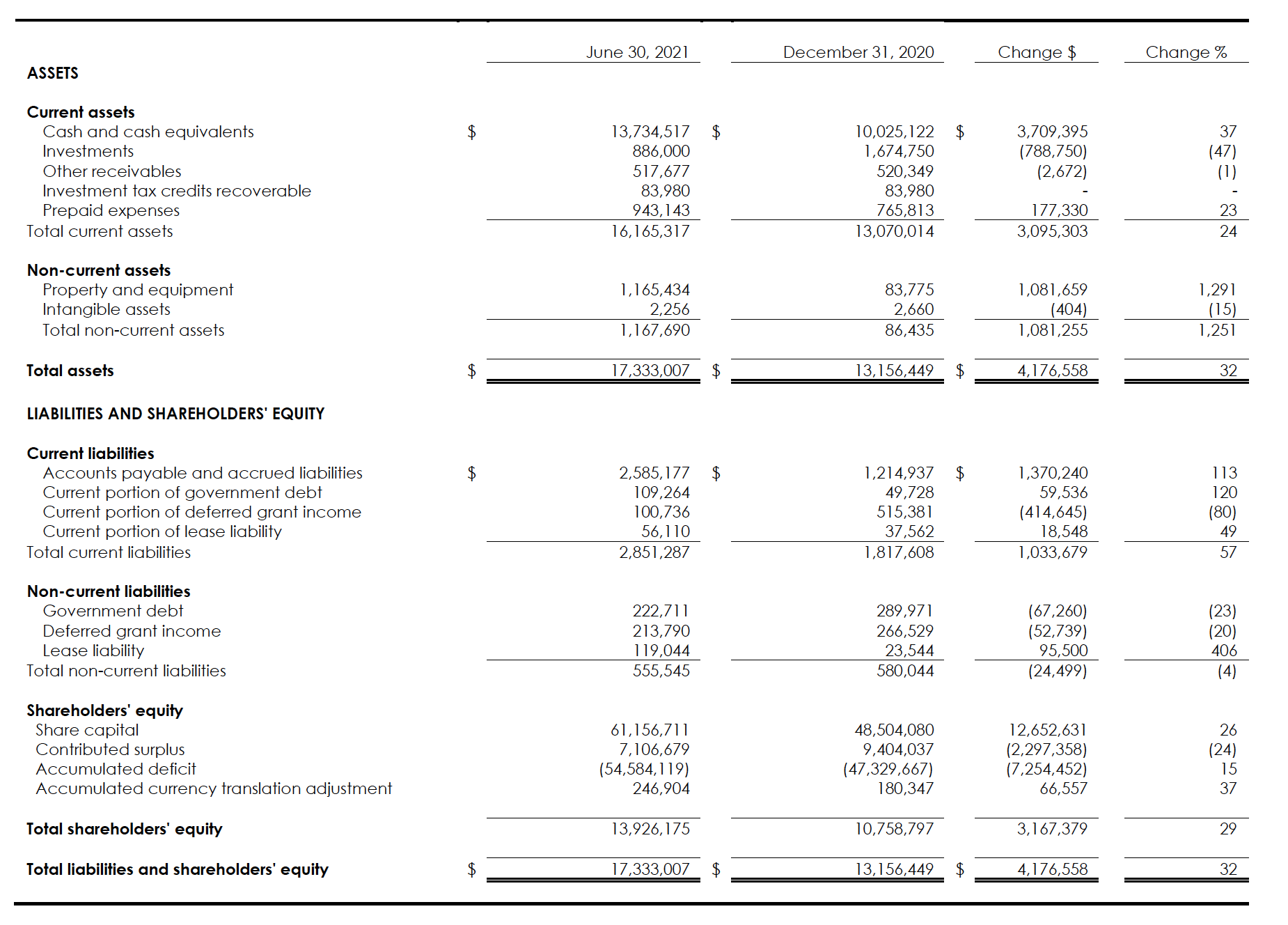 From the balance sheet above we can see that the company has a top heavy or equity heavy capital structure. At the end of June 2021, the company had a total of $13.9 million in shareholder equity and about $400,000 in debt mainly the government debt of 222,000.

The firm is also relatively asset light with more cash and cash equivalents than property and planting equipment. in June they had $13.7 million in cash and $1,000,000 in property and equipment bringing their total assets to $17.3 million compared to their total current liabilities of $2.8 million. The firm is in a great current working capital condition and can pay off all its short-term obligations. The Equipment (in progress) relates to the imaging devices which they expect to provide to customers primarily for use in generating recurring revenue from the sales of specimen immobilizers in the future.

The management team has also used some of their cash to deploy into strategic investments for example in June they had $800,000 in investments.

Investments held by the Company comprise of equity shares in publicly-traded security acquired through the reverse take-over transaction in 2020. Thus far the company has only sold about $428,000 of their position.

As the company continues to invest money into its imaging devices and gearing up for commercialization, we can expect the income statement to continue to show net income losses as they grow their ability to service their customers. The most important thing for the company right now is its ability to deploy cash that is raised from the markets at high incremental rates of return.

This should be done while keeping the integrity of their balance sheet sound allowing them to use financial leverage in the meantime to scale the operations.