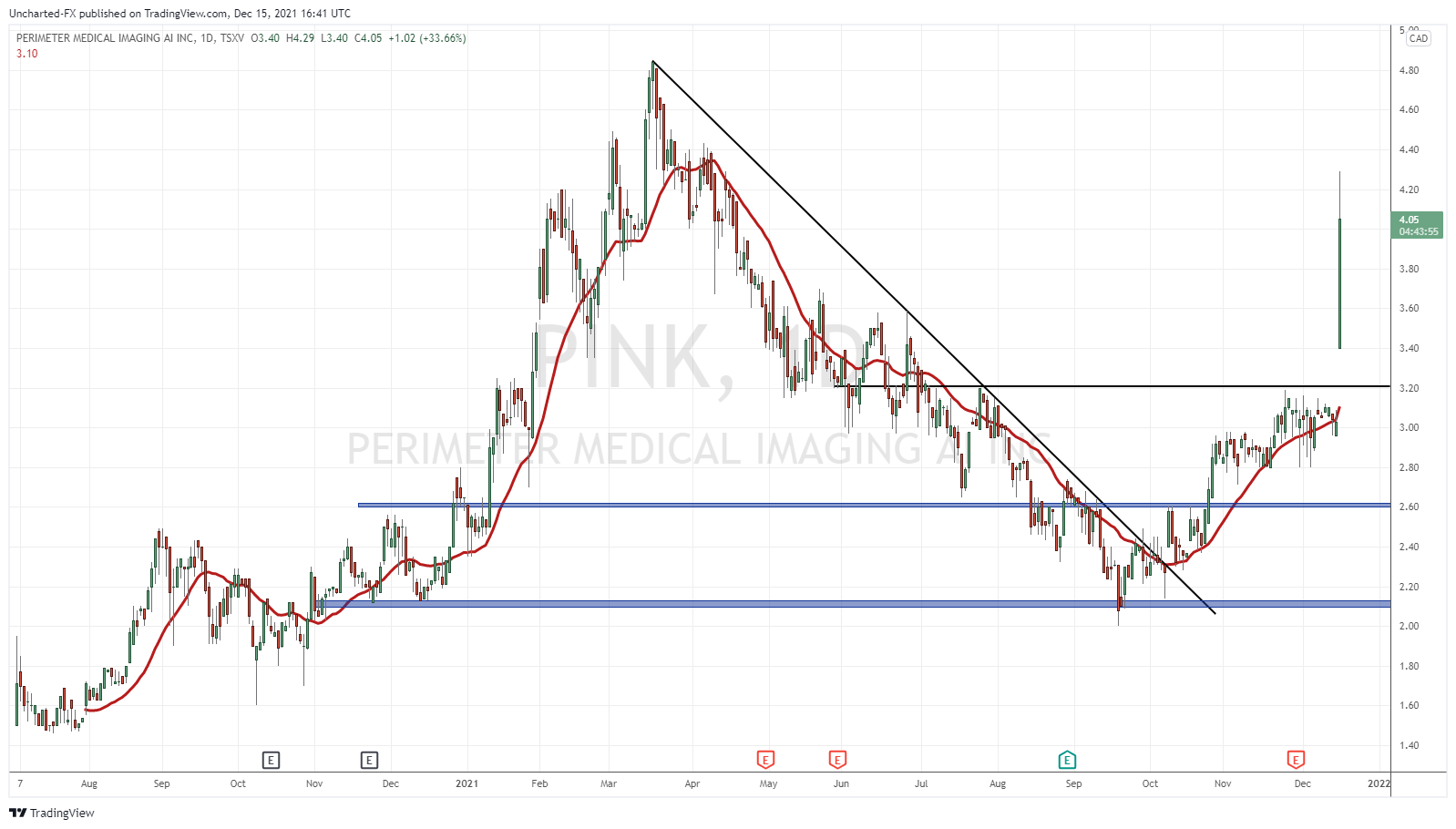 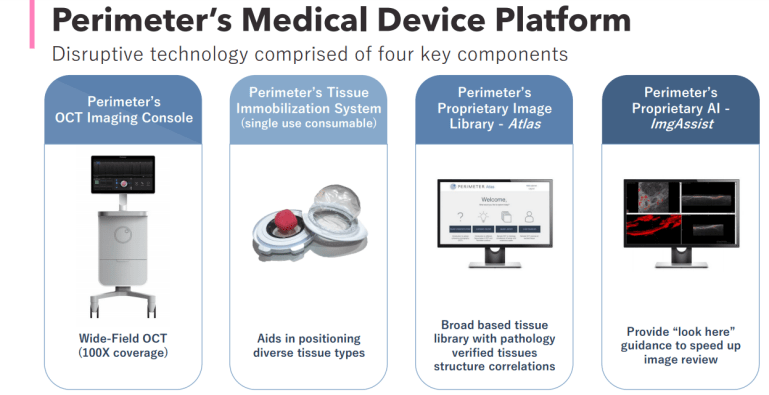 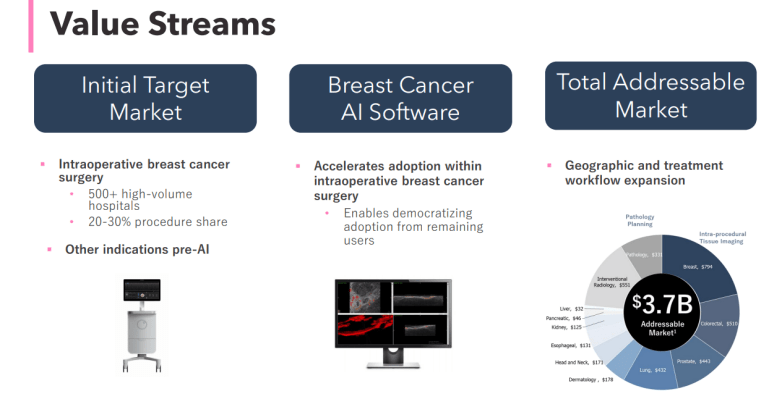 The stock is currently up 33.99% at time of writing, and there is a high chance it is probably higher when you are reading this. Current volume is just over 1 million shares traded and here’s why: Perimeter medical today announced that it has entered into a subscription agreement pursuant to which an affiliate of Social Capital Holdings Inc. (“Social Capital”) will make a strategic C$43.4 million investment in the Company.

Jeremy Sobotta, Perimeter’s CEO had this to say:

“We believe Social Capital’s investment marks a transformative, pivotal event for Perimeter that will help accelerate our growth. This strategic partnering comes at a time when we are ramping up our Perimeter S-Series market development activities and commercialization efforts across the U.S., while also supporting the ongoing clinical development of our next-gen AI technologies. This financing provides us with the backing to execute upon our long-term vision to transform cancer surgery.”

What got me, and I am sure shareholder’s giddy, was Chamath Palihapitaya’s comments:

“Perimeter’s advanced imaging technology has the opportunity to materially improve cancer surgery outcomes. Today’s methods rely on contemporary imaging techniques, which often result in the need for additional surgery, increasing payer costs and potentially delaying subsequent treatment plans. This investment will support the commercial launch of Perimeter’s initial imaging device for breast cancer, but equally as important, we believe it can accelerate their path to become the standard of care for many other surgical applications in the future.”

Chamath, the CEO of Social Capital, is thinking just like us here on Equity Guru. We have been saying the same thing on our Investor’s Roundtable.

For those that do not know much about Chamath Palihapitaya, he is a Sri-Lankan born Canadian venture capitalist making waves this year. He has been on CNBC many times, and is investing in transformational ideas, technology, and people. All about a better future. The man has had a big win with Tesla, is known as the SPAC king, and also is a serving chairman for Virgin Galactic (SPCE). I cannot stress how huge this news is for Perimeter Medical.

Here are more details regarding the investment:

Social Capital has agreed to subscribe, on a non-brokered private placement basis  for C$43.4 million in units of Perimeter at a price of C$3.00 per unit, with each Unit consisting of one common share  and a total of one warrant  to purchase an additional Common Share . 80% of the Warrants issued in the Private Placement will have a strike price of C$3.99 and 20% of the Warrants in the Private Placement will have a strike price of C$4.50. Half of the Warrants at each strike price will be subject to accelerated expiry if the 60-day volume weighted average trading price of Perimeter’s Common Shares is greater than the strike price during the applicable period. The other half of the Warrants will not be subject to accelerated expiry, and instead they may be exercised for cash or exercised using a cashless exercise feature at any time prior to expiry. Subject to the accelerated expiry clause described above, all Warrants will expire five years following the closing of the Private Placement.

Social Capital will also enter into an investor rights agreement with Perimeter at the closing of the Private Placement, which will provide Social Capital with the right to nominate one director to the board of Perimeter, with anti-dilution rights to participate in future financings, and with customary registration rights.

By the end of it all, Social Capital will end up holding over 20% of the issued and outstanding shares of Perimeter Medical.

Before we look at the current chart, I want to plug in my previous technical analysis of Perimeter from November 4th 2021, where I stated “Perimeter Medical Confirms a New Uptrend!” This was the chart set up posted: 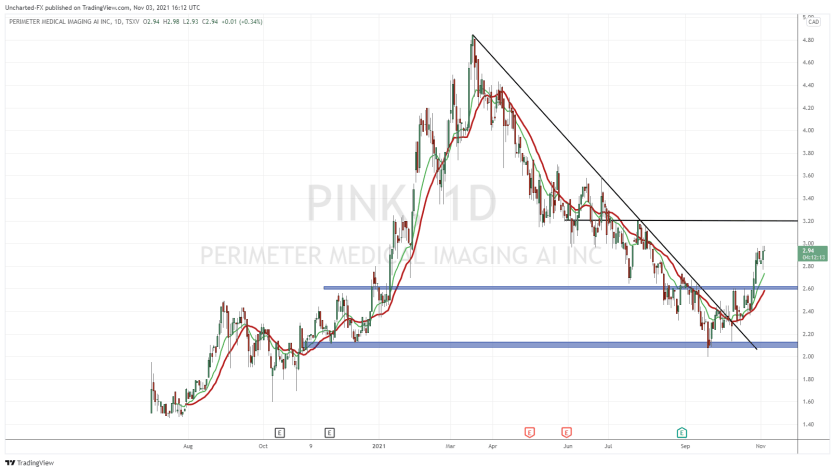 We had the confirmed breakout above $2.60, and furthermore, we had our reversal pattern with a trendline break. Super bullish, and the structure was giving us a sign. A new uptrend with more higher lows to come. In my experience with technicals, whenever we have a trend shift, it generally means big news is coming. It is difficult to explain in words, but one should expect good news when a market structure shift occurs, and more higher lows are expected. Here is the chart we are working with now: 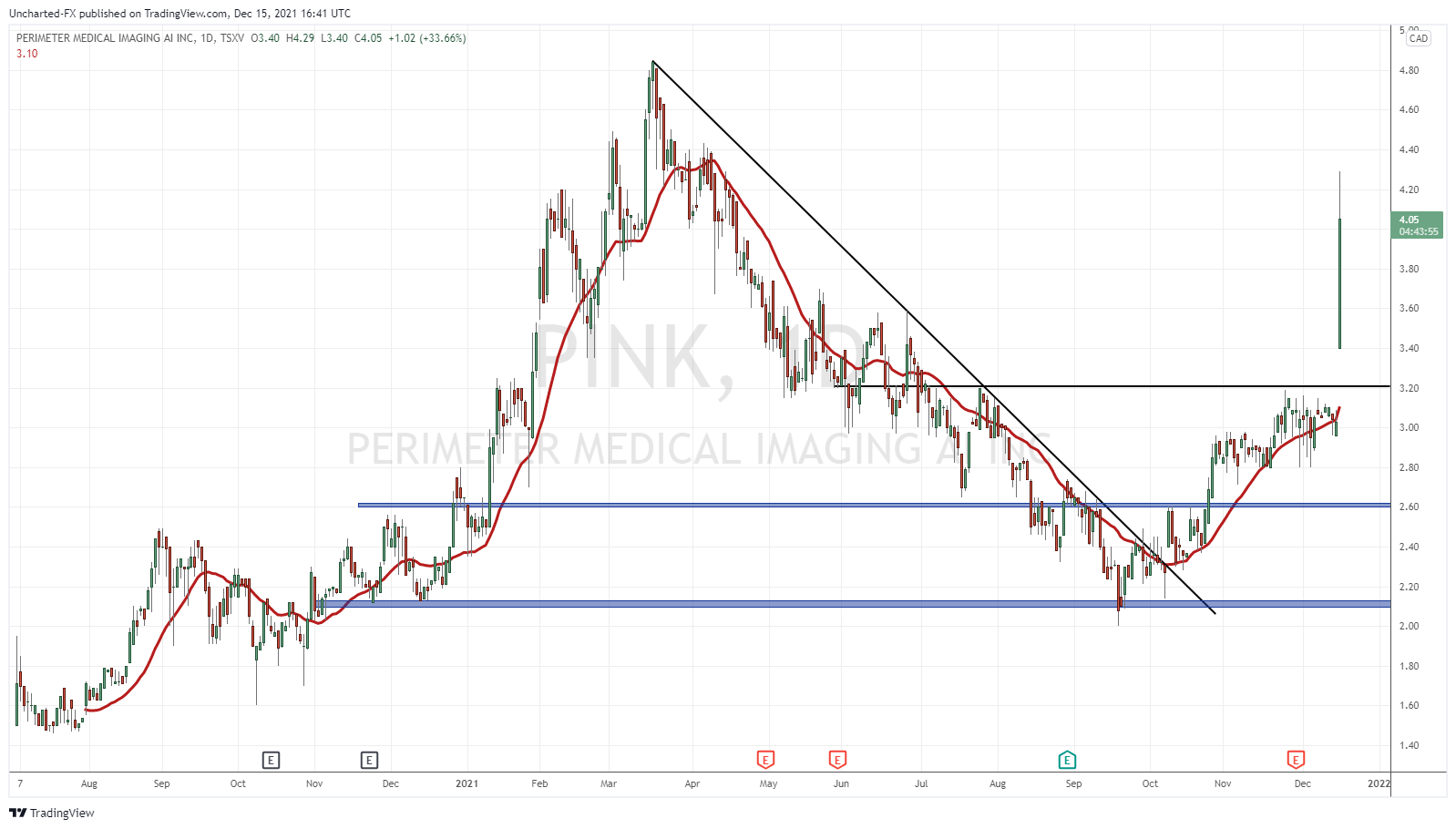 Today’s news is what gave us the breakout above $3.20, which becomes our new support moving forward. Although, $3.00 seems like a great line in the sand since that is the price of the shares acquired by Social Capital. Remember the warrant strike prices: $3.99 and $4.50. Keep that in mind, because I am sure some of those will be executed. Technically though, what was once resistance at $3.20, now becomes new support. If we pullback to this support, I expect to see heavy buying. It would be a great entry point.

In terms of resistance? It really is the previous record highs at $4.80. I do think that gets tested in the upcoming weeks and months, and we end up breaking above it. Huge news for a great company, and with Social Capital and Chamath in the mix, it will definitely catch the eyes of more retail and institutional traders. Once we climb over $5.00, that’s when a lot more institutions will be paying attention.