However, Perimeter has plenty of resources that will allow them to withstand such net losses. At the end of the quarter, PINK reported they had $16,367,581 in cash and cash equivalents, on top of $1,068,000 in investments.

“Supported by a strong balance sheet and a driven leadership team, we continue to execute against our clinical development and commercialization strategies.”

Jeremy Sobotta, Perimeter’s CEO stated, “Supported by a strong balance sheet and a driven leadership team, we continue to execute against our clinical development and commercialization strategies. With FDA 510(k) clearance for Perimeter S-Series OCT, we are ramping up our sales development activities to support our commercialization efforts in the U.S. In addition, we initiated a physician-led study in collaboration with Northern Arizona Healthcare evaluating how surgeons might use Perimeter S-Series OCT to aid their decisions during breast conserving surgery and improve patient outcomes.”

In April, Perimeter received a ‘Breakthrough Device Designation’ from the FDA, which provides them priority review on future regulatory submissions. It also provides them priority access to the fattest of all cash cows in the medical industry: Medicare. Medicare currently covers 61 million people and spent over $762 billion USD in 2019, and receiving the Breakthrough Device Designation allows their device to automatically receive Medicare coverage for four years after its approval, through a program called Medicare Coverage of Innovative Technology (MCIT).

PINK also added 400 volumes of images to their AI, helping to train it on images of excised breast tissue.  The data generated to date supports the continued advancement of Perimeter’s “ImgAssist” AI technology to the next stage of the ATLAS AI Project.

“The recent Breakthrough Device Designation from the FDA marked another milestone and significant validation of Perimeter B-Series OCT with ImgAssist AI, our ‘next-gen’ technology currently in clinical development. Supported by a grant from CPRIT, our ATLAS AI Project aims to show that the combination of artificial intelligence with our proprietary OCT platform could be a transformative, disruptive new technology that helps surgeons treat breast cancer. The next key objective is initiating a randomized, multi-site pivotal study to generate data to demonstrate how Perimeter’s technology performs against the standard of care,” added Mr. Sobotta. 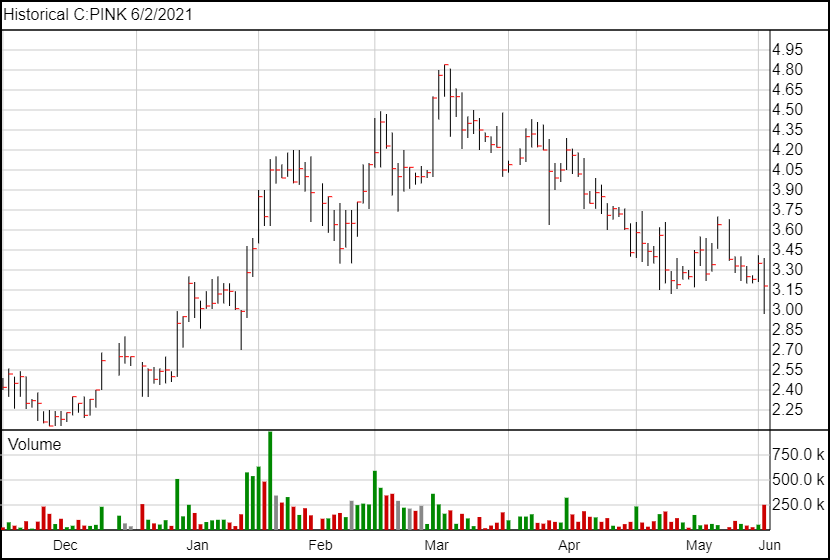 Since Perimeter’s financial report, PINK shares are down 5 cents and are currently trading at $3.18.