A lot of eyes were on Bitcoin and cryptocurrencies this past weekend. Here in Canada we had a long weekend, but I still popped in to look ay my Bitcoin chart from time to time.

Last week, I discussed my general strategy for Bitcoin. $30,000 is our major support, and if that breaks, then we can see a move lower to $20,000. In order to nullify my downtrend stance, we need a close above $45,000. If we remain below this, the chances of new lower lows is entirely possible and probable.

Over the weekend prices did show signs of recovery, only to be slammed back down to $30,000 where we retested our support zone for a second time. Under the technical analysis portion of this article, you will see the candles are indicating a strong group of buyers.

Expect volatility folks. CNBC just put out a piece stating that Bitcoin traders are using 100 to 1 leverage on trades. These leveraged trades were the main culprit for Bitcoin’s major sell off as traders rushed to close positions on dumps. Bitcoin traders liquidated roughly $12 billion in levered positions last week as the price of the cryptocurrency spiraled, according to bybt.com.

But cometh the moment, cometh the man. One of the most respected names in the hedge fund game (although he doesn’t manage money anymore) Ray Dalio came out saying that he does own some Bitcoin.

His reason for doing so? You don’t want to be in fiat currency as central banks are in a currency war to devalue their currency to boost exports and keep asset prices propped. Essentially central banks are stuck. Remember, this was his thesis for owning Gold too. Gold is the best currency when ‘cash is trash’. Why own bonds that yield next to nothing, when you can own Gold (and now Bitcoin), which is a safety asset and can bring you gains of more than 3% a month on how it moves?

In the past I have spoken about Bonds. The only reason to own bonds is ironically for capital appreciation. Buy bonds knowing that central banks will likely cut interest rates into the negative, or deeper into the negative in the case of Japan, Switzerland, Europe and a few other nations. These bonds yielding higher will be worth more if rates are cut further. Trading bonds for capital appreciation rather than consistent yield. 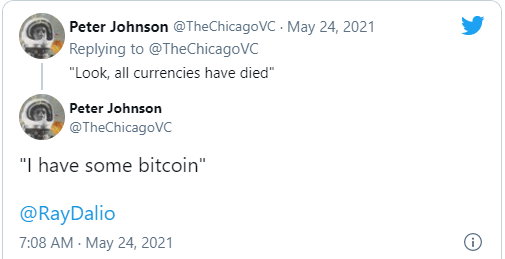 In a way, Ray Dalio sounds just like yours truly. Since last year, I have been warning about this dilemma central banks are in here on Market Moment and on our Discord Trading Room. Why current monetary policy must continue, and why we will see stocks move up, and why you want to be in hard assets (Gold and Silver being my favorite) and even crypto’s.

Shhhhh. If you are quiet and listen very carefully, you might hear the printing machines.

I will share some of Dalio’s comments here, but once again, long time readers will be familiar with this:

Money is credit – you can make it up.

But the incentive right now to hold dollars is low. No interest being paid. Even bonds don’t yield much.

All of those financial assets are claims on real stuff, real goods and services.

And when the pile becomes very big, and the incentives for not holding that are no longer there, you have a problem.

Eventually people will go to “almost anything else” – stocks, gold, real estate and yes, even bitcoin.

Dalio also reiterated JP Morgan’s stance: he likes Ethereum as it is more efficient for payments. Something the crypto community has said with Bitcoin being the store of value and Ethereum being the money for the internet.

He also warned that Bitcoin’s greatest risk is its success. If more money starts leaving bonds and stocks for Bitcoin for safety, governments may need to act in order to get money flows back into those assets. Something he has warned about in the past, using the US government banning Gold as a real life example of this.

My take remains the same. I believe regulations are coming. As long as crypto’s are traded they will continue. Institutions make money and the retail crowd makes money. Everyone is happy. BUT if crypto’s make a push for being used as an alternative currency, the central banks will push back. These guys have had the monopoly on printing money for centuries, and they will do what they have to in order to keep that monopoly. 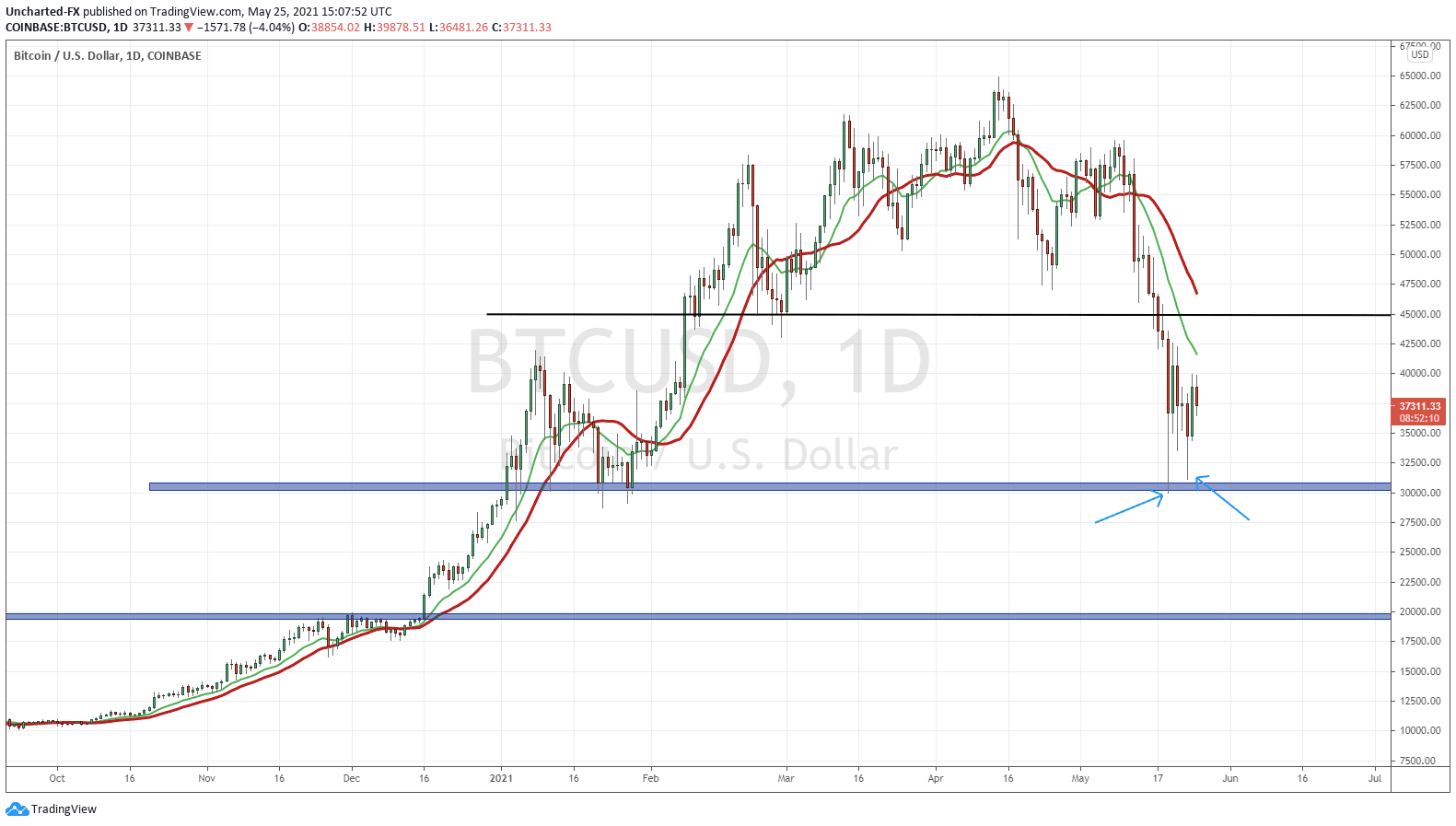 Bitcoin reached our first downside support target within two days. Note the arrows, particularly the second arrow, indicating and confirming that this zone remains support. Notice the large wicks on the candles. Another sign of plenty of buyers defending and buying the dip. Going forward, $30,000 remains major support. If we do roll over and close below, the sell off to $20,000 can happen very quickly as some buyers (leveraged too) close positions.

But the 4 hour chart is showing some promising signs of bottoming: 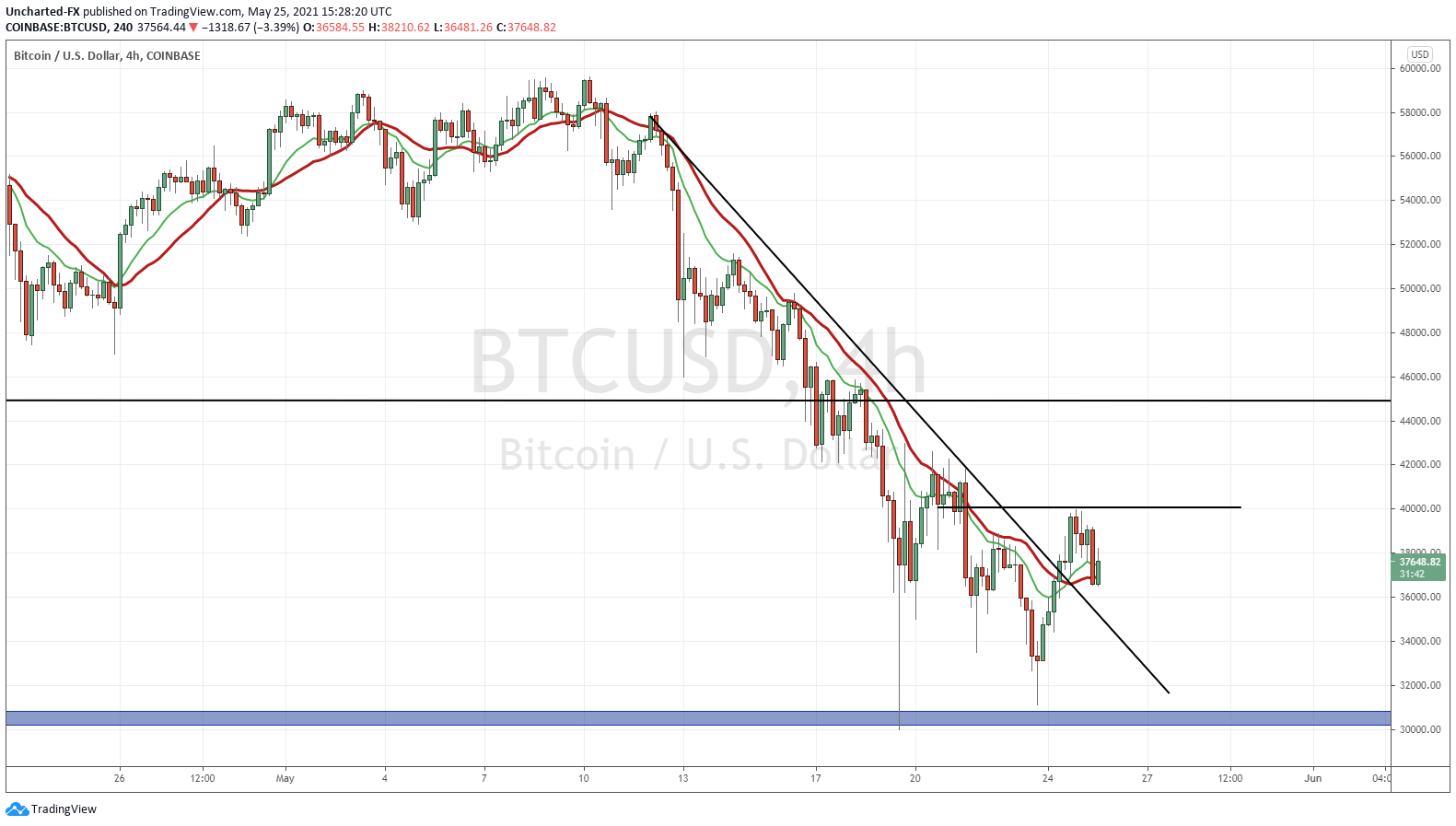 The 4 hour is a nice entry time frame when scoping out daily chart levels and triggers. Since we know $30,000 is holding on the daily chart, we just need some pattern or technical confluences on the 4 hour. We do have some.

The trendline that I have drawn connecting the lower highs in the downtrend has also broken. Trendlines can be subjective but I still think they play a good part in indicating trend reversals. The key still remains the swings: lower highs for downtrends and higher lows for uptrends.

Just two confluences that builds a case for reversal but a trigger is missing. Some of you with more experienced technical eyes already see it. A head and shoulders pattern is setting up, and where prices are right now could just be the higher low for our right shoulder. Regardless, I would await for the break and close above $40,000 on the 4 hour.

Keep in mind our daily resistance at $45,000. This zone still remains the key in determining whether Bitcoin makes new record highs or if we make another move lower. Be prepared for more volatility going forward.