KWESST will now be offering 3,200,000 units for $1.25 each, up from their initial offering of 2,000,000 units. Each unit will contain one common share of KWE and a purchase warrant exercisable for 24 months that will allow its owner to purchase a share of KWE at $1.75.

Because of the upsizing of the offering, the parties involved have removed a previously agreed upon over-allotment option which would have allowed the agents to purchase 400,000 units within 48 hours of the offering’s closing.

“The KWESST Offering was very well received by investors and resulted in significant demand for our financing, which led to the increase in size announced today. The proceeds will be used to accelerate our go-to market initiatives of KWESST’s various products,” stated Jeffrey MacLeod, KWESST’s President and CEO. “One of our priorities is to finalize the acquisition of the Low Energy Cartridge (“LEC”) non-lethal system, which is expected to close concurrently with the Offering, after which we will begin the commercialization of this product. The Company has an accelerated plan to roll out the LEC product in response to market interest and high growth across all segments of the non-lethal market where a strong preference is being expressed for a safer, cartridge-based system over traditional systems such as Taser, beanbag shotgun shells and rubber bullets that can and do result in fatalities.”

And it’s not surprising, given their shares are currently trading at $1.47, so the offering allows investors to get a hold of common shares at a pretty serious discount. Earlier this week the stock was trading as high as $1.90 before dropping.

Part of the recent surge in KWESST’s stock price was due to their signing of an agreement with ArielX Drone Solutions, which would grant them exclusive rights to their technology for the US and Canadian militaries.

KWESST focuses on providing innovative solutions to modern military and security threats. With President Biden requesting a $715 billion USD pentagon budget today, it seems that although there is a new administration in Washington, the same sky-high military spending will continue going forward. KWESST could stand to benefit from ever-increasing military budgets. 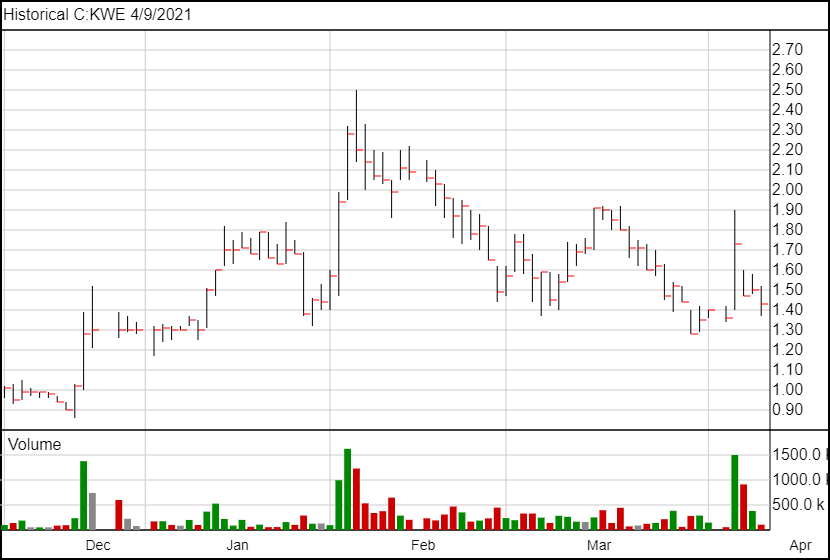