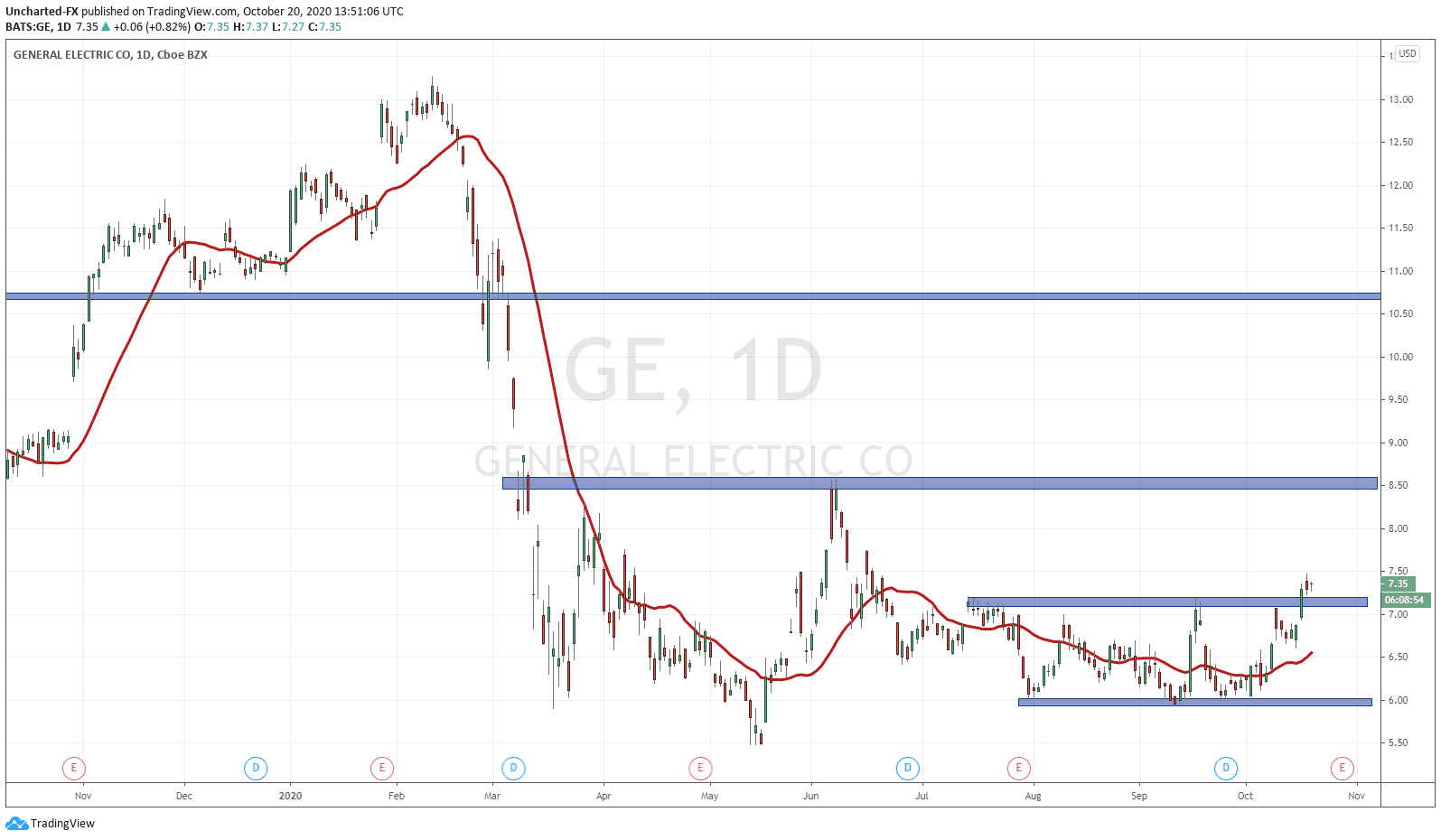 There are a lot of Stock charts that are displaying market structure patterns that I enjoy to trade. General Electric (GE) may not be one that comes to mind first. The stock gained a lot of notoriety when Warren Buffett scooped some up after the Great Financial Crisis, but recent 13-F filings indicate Berkshire Hathaway does not hold a GE position anymore. Albeit it, the bottoming pattern on the chart looks great, and in fact has already triggered, providing an entry opportunity for those who missed the breakout.

Before I delve deeper into GE and the chart, just a word of caution. Nancy Pelosi has said that today is the deadline for a stimulus deal to be reached in order for it to be passed before the US election. Markets are reacting as this stimulus deal agreement will be reached. Bond market is showing money leaving the safety of bonds and likely being ready to be redeployed into stocks. This can still turn out to be a sell the news event. Perhaps the stimulus deal is NOT reached, and markets then begin to sell off. However, over on Equity Guru’s Trading Room Discord Channel (link icon is on top of this page), I have warned traders/investors that all the US equity indices have pulled back to major daily support zones, and we should expect a bounce from here. This stimulus deal COULD be that trigger. In the past, I have said the headlines of this stimulus deal has been like the US-China trade deal headlines. After sometime, the markets did not care anymore, and stopped reacting to all the headlines. Will this be the same? Will we even hear that a no deal stimulus be covered up using the headline a “phase 1 stimulus deal has been reached”? Would not be surprised.

General Electric is a stock which got the double whammy. The stock fell with plenty of other stocks with the covid everything sell off, but the major fundamental hit was the Boeing 737 Max being grounded as GE’s aviation division makes the jet engines for the plane. Not to mention the fact that air travel will likely be slow for the foreseeable future, which points to more layoffs for GE’s aviation division.

A bit of a saving grace with the 737 Max now meeting safety requirements by European regulators and is now expected to be back on the flight schedules by year end. This news was the catalyst for our price to breakout.

So we do have earnings coming up for the stock on October 28th, but I argue, just as I have with the bank, cruiseships and airlines, that the bad earnings have already been priced in. This means that a bad earnings call will not move the price of the stock. The earnings in July came in at a negative surprise at 168%. The stock price did not tumble lower on the announcement.

Since then, the stock has been in a ranging pattern. We have tested the bottom band of this range as support (price floor) three times. The would meet the criteria of a triple bottom pattern. Same reversal pattern like the double bottom, but has three touches rather than two. No surprise there. The key that I look for is the breakout to trigger the pattern. We got this Friday. A very strong breakout candle above resistance (price ceiling) which triggered this pattern. Once again, our Discord members were notified of this.

The momentum of the breakout has not carried through, but this is understandable given the move in the equity indices. However, as I mentioned above, there is the potential for markets to bounce from support on a stimulus deal. GE has remained above the breakout zone. Previous resistance is now support, and as long as we remain above this support, the uptrend is still intact. We have seen breakouts retrace back to support before continuing higher, this could be occurring currently. What this means is this provides a great entry for those who missed the breakout. The stop loss would be placed below the breakout candle, just under $6.90.

In terms of upside targets, our risk vs reward ratio remains attractive. The first zone where price can see some barrier is the 8.50 zone. It has been a zone which provided resistance in the past. Depending on how price reacts there, one can take profits. For those wanting to hold longer, there is a much larger flip zone (area which has been support AND resistance) at the 10.70 zone. That would be the second target.

So in summary, a great trade setup. The technical is too good to pass up, and all our criteria have been met. On the fundamentals side, US airlines and European airlines are designating the 737 Max safe to fly which is great for the GE aviation division. A broader stock market move higher on a stimulus deal just increases the probability of the momentum of the breakout carrying through.